The Broadway play 1984 is not for the average theatergoer. Adapting George Orwell’s dystopian novel — set in a future when critical thought is suppressed by a totalitarian regime, ostensibly overseen by a party leader known as Big Brother — the non-linear staging includes special effects like strobe lights, sudden blackouts and jackhammer sounds, in addition to the plot’s extreme torture scenes.

Throughout the London transfer’s previews, attendees have fainted, thrown up and screamed at the actors from their seats. After one performance, some audience members were so on edge that they immediately got into a heightened argument. Cops were called; charges were pressed.

“I’m not surprised, since this experience is unique, bold and immersive,” Olivia Wilde, who broke her tailbone and dislocated her rib during previews, told The Hollywood Reporter after Thursday’s opening-night performance (during which one attendee passed out). “It allows you to empathize in a visceral way, and that means making the audience physically and emotionally uncomfortable.”

Added Icke, “You can stay and watch or you can leave — that’s a perfectly fine reaction to watching someone be tortured. But if this show is the most upsetting part of anyone’s day, they’re not reading the news headlines. Things are much worse than a piece of theater getting under your skin a little bit.”

The cast knew how the shocking scenes would be presented, but “it wasn’t until we got in front of an audience, when I saw and heard people responding, that I was suddenly aware of how powerful it was,” said Reed Birney, who has previously yelled back at a ticketholder who pleaded for his character to stop the torture. Meanwhile, Tom Sturridge, whose character bleeds heavily while being electrocuted, told THR that he makes a point of staring into the eyes of individual audience members, calling them “complicit” as they watch him suffer onstage. 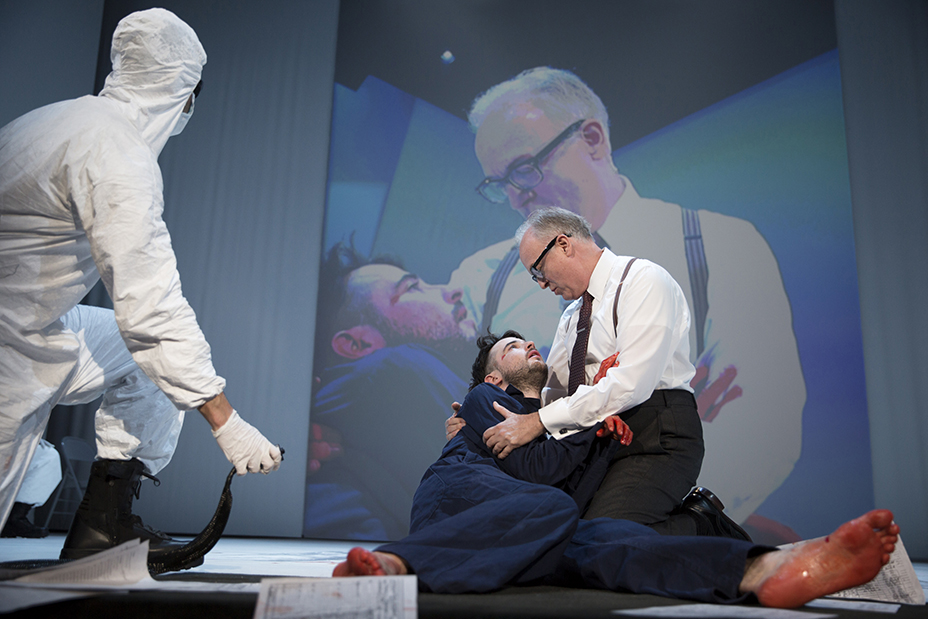 To manage the range of reactions, security guards are positioned throughout the entire Hudson Theatre for the duration of the limited engagement, which plays through Oct. 8. And just before opening night, the production began enforcing an age restriction, allowing no one under 13 years old to attend (it previously only had a warning of parental guidance in place).

In Trump Era, '1984' Is the Hottest Literary Property in Hollywood

The move is not a publicity stunt, but a necessary response after Sturridge and Birney spotted a 7-year-old child in the audience. “Tom and Reed were aware of what they were about to do, and they weren’t in a position to stop the play, and they were quite distressed by it,” recalled Macmillan.

To Icke, that child’s presence speaks not to 1984’s extreme nature, but instead to Broadway’s status quo, which only asks audiences to laugh and applaud in unison. “It shows how middle-class and limp our art form has become, that nothing is ever scary enough for a [formal ratings system]. There’s an assumption that theater is always safe and comfortable; it’s never that scary, it’s just ‘theater scary.’ This is designed to hit you hard — please take that [warning] seriously.”

Though young children are not allowed, those of all political affiliations are welcome, stressed Wilde. “The term ‘Orwellian’ is used by both sides of the aisle, and members of the right really claim this book as their own, so I hope they come see it,” she said of 1984, which again became a best-seller after Donald Trump’s inauguration. “I hope this show makes people question everything they’re being told. All we’re saying is, the truth matters.”

Added Birney, “If people don’t pass out, I hope they’re reminded of our power as citizens, and our responsibility as human beings to each other.”