The invite read “A Special Event with Celine Dion,” and the information provided with RSVP confirmation revealed little more: “Celine Dion is holding an exclusive event for a special announcement at the Theatre at the Ace Hotel in downtown Los Angeles.”

There was no mystery that Dion, who turned 51 on March 30, had an opening in her schedule. She announced last September that her residency at the Colosseum at Caesars Palace would come to a close in June, ending an impressive and unexpected 16-year run in Las Vegas. What would she do next? There has been a string of announcements, from a biopic project to a newly signed L’Oreal contract, but nothing that screamed full-time gig. It turns out that’s what Wednesday’s event was all about — Dion was finally ready to reveal her new, post-Las Vegas focus. And she made a big spectacle out of it, proving that she had learned quite a few tricks during her tenure in Sin City.

With every seat filled on the venue’s ground floor, the lights went down seconds after 3 p.m. to reveal the first sighting of Dion — not in real life but on the big screen starring in a short film. Staring at herself in the mirror, the bandana-wearing chanteuse used a tube of red lipstick (L’Oreal?) to tease the big reveal, writing on the mirror this message: “Ciao for now Las Vegas! Love, Celine xoxo.”

“Time to hit the road,” the singer then said as she threw on a blinged-out black baseball cap with the word “BOSS” over the brim. Putting the exclamation point on her new status, Dion then loaded up a semi-truck with Vegas souvenirs (an Elvis impersonator, a showgirl and an elderly woman seated at a poker slot machine) and got into the driver’s seat to exit the 702. Barely out of Las Vegas, the truck breaks down, but Dion and crew aren’t stuck on the side of the desert road for long.

Enter a minivan filled with drag queens dressed as super divas: Diana Ross, Tina Turner, Barbra Streisand and behind the wheel (again) Dion. “It’s gonna be a long drive,” the real Dion quipped once she got settled in the passenger’s seat for the ride to Los Angeles in a van that had a clue on the bumper: a sticker with the word “Courage” on it. Though they never said that’s where they were headed, that’s where they ended up, dropping off Dion at the Ace, and she played off the transition nicely, appearing from behind the screen to kick off the event live in person by singing her hit “I’m Alive.”

Everyone in the audience was on their feet for the duration and when the song was over, it was time for Dion to officially announce the big news.

“But you know what, I think it’s time for a change,” Dion said. “Time to hit the road. So many people came to see us and now we really all think that it’s time for us to go and see them.”

That’s what she’ll do via Courage the World Tour in support of a new album and track of the same name. It is set to kick off Sept. 18 in Quebec City and continue through April 2020. The album’s release date has yet to be confirmed, though Dion said it will be “November, roughly.” 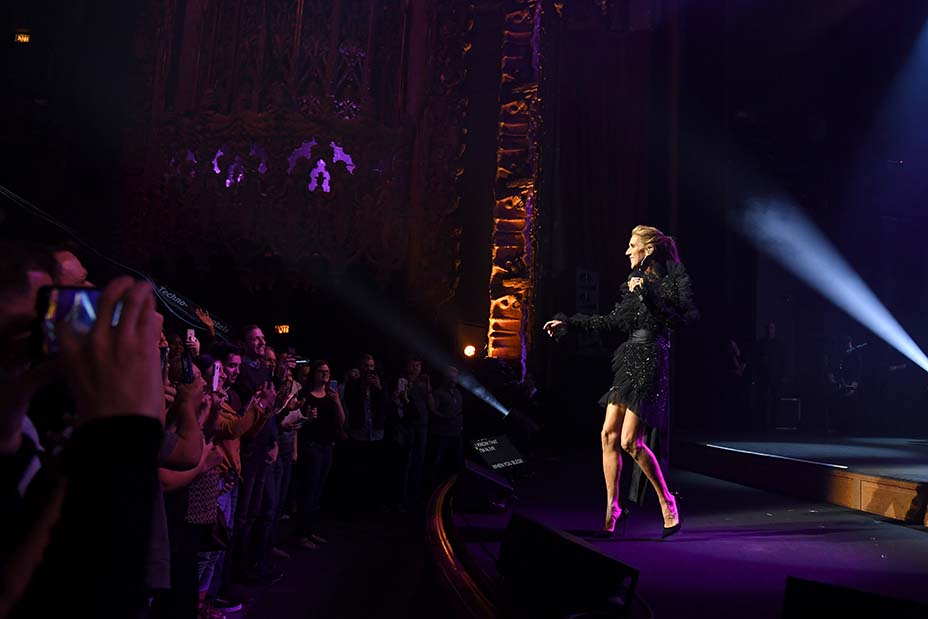 “Lots of news, lots of work,” she said. “The biggest news — no, I’m not pregnant, don’t worry — [is] I will be driving the truck on tour [winks]. Have you seen how I drive? In the past I used to drive people crazy, now just get out of the way, would you? That’s it.”

Not so fast. There was more to come, and Dion had more theatrics planned. And a story about Ryan Reynolds.

“About a year ago, I got a letter in the mail,” the singer recalled of the delivery from a fellow Canadian. “It was marked ‘personal and confidential to Miss Celine Dion from Ryan Reynolds.’ Well, for a minute I thought, of course, he wants me to play in a movie with him, duh. I know what he wants. Then I woke up from my little dream and I read this letter and I discovered that he didn’t want me to play in the movie but that’s because he, poor thing, pumpkin, he didn’t see me driving the truck, you know how good I am. If he would’ve seen that, maybe he would’ve considered [me] to play in the movie with him. It’s too late. … I reread the letter and it said, ‘Can you consider to sing a song’ for [Deadpool 2]. I played the song and I didn’t have to play it twice, I loved it so much. I would love to sing this song for you, it’s called ‘Ashes.'”

And sing she did, and it was not the last track during the mini-Celine Dion concert. She capped off the set with a flawless rendition of “My Heart Will Go On,” a song made famous by James Cameron’s Titanic. She even referred to the song as “Titanic” at one point during the Q&A portion that followed when she was joined onstage by radio personality Ellen K. During the chat, Dion was playful, silly and, at one point, even a bit sassy (when she scolded a male audience member for not recalling how many times she had been on tour before this). Through it all, however, she made it clear that, like the hat says, she’s the boss of the next chapter of her career. 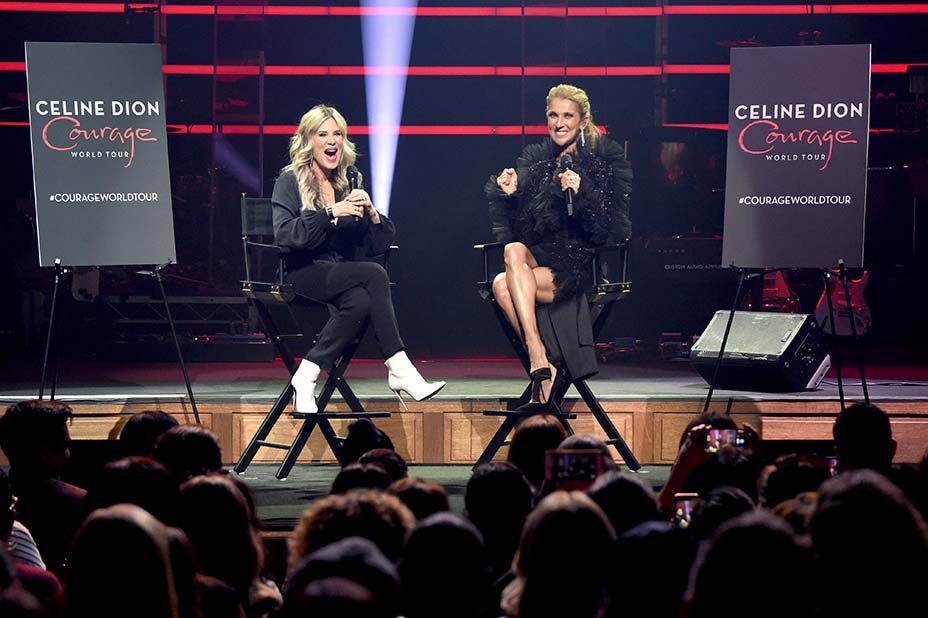 The conversation was streamed on Facebook Live, and one of the first questions to come from the social media platform was about who Dion is listening to these days. “I am totally addicted to Sia,” she answered without taking a minute to think. “Whatever her journey was, I feel her pain and her passion and I connect with her music tremendously. I’m not supposed to say, but my name is b-o-s-s…she is part of the new album as well.”

After dropping more news, Dion broke out into song, singing a few bars of one of Sia’s biggest hits, “Chandelier.” “By the way, Sia, you should’ve kept that song for me. I love chandeliers,” she quipped.

Dion also loves ballet. She revealed that she’s taking classes because “it’s my new passion.” During one of those classes, her instructor played a song that stopped Dion in her tracks. She found out it was by Laura Pergolizzi, an American singer and songwriter who performs under the stage name LP. “I need to find her phone number because I need to see if she can write for me,” Dion begged. “I would love that.”

Next question: “Are Charlie and Bear going on the road with you?”

Those are her two dogs, and the answer was yes. Basically.

“They’re not going to do the whole world tour,” she said, adding that some stops require that animals remain in quarantine for a period and that is something she “could not ever, ever — my name is Eva! — for one minute” be responsible for. Dion then said that her children will remain at home in Las Vegas. It worked out well, the last time she was away, she said, so that she feels comfortable not messing with their school routine. Dion has three boys (with her late husband, Rene): Rene-Charles, 18, and twins Eddy and Nelson, 8. “I was so busy and working very hard,” she said of the last time she left them home alone for approximately two weeks. “We FaceTimed and they said, ‘Hi, Mom! Is it daytime or nighttime for you?’ I said, ‘I’m going to bed.’ [They said], ‘We’re just waking up.’ I said, ‘Have a good breakfast, baby, and you play hard.’ They said, ‘Night night, Mom.’ Then I said, ‘They don’t miss me. They’re doing really fine.’ The fact that they did so fine without me … I did amazingly. That’s my goal — that my kids are fine. Because the school needs to keep happening, I will go on tour without my children and only two or three times leave them for two weeks. That will be the longest I will be away from my children. For me, that’s a lot.”

She has already been through a lot, Dion explained during the answer for the next question — why she titled the tour “Courage.”

“There’s a song on the album that’s called ‘Courage,'” she noted. “We all go through a lot of things in life. … Life had given me the tools, my family, to find my inner strength, to find courage, to keep going. When I lost Rene — before he went to his other life — he wanted me back onstage. I wanted to prove to him that I’m fine, we’re fine, I’m gonna be OK, I got this.” Dion said that basically everyone that works with her from the crew, management, her stylist (Law Roach, who has been battling health problems) to the “people who take care of my children,” have been facing their own struggles. “We embrace the moments that are difficult,” she said. “They gave me so much strength.”

With that, she said, “Courage” revealed itself to be the title of the track, the tour and, likely, the next chapter in her career.

Tickets go on sale this week. Check out the full list of the dates below.

Here’s @celinedion news: New album, world tour, this November-ish after closing Vegas residency June after 16 years. She jokes it was to be 2 months but people kept coming, her heart kept going “on and on and on and on.” She leaves LV as more singers have followed her lead there pic.twitter.com/IlxsCsIhyw

Here’s @celinedion on why she’s calling the new tour “Courage.” (It’s the name of album and single…) pic.twitter.com/cfEEgINJ3T

Celine Dion Biopic 'Céline Before Celine' in The Works (Exclusive)