TODD MCCARTHY Most “serious” directors think of themselves as visual artists, descendants of those who worked in the creative arena before the introduction of electricity and celluloid. They’re keen to identify with artists from a different century who, in their fantasies or self-projections, might not have been sufficiently appreciated in their lifetimes.

RANDY KENNEDY I’m probably the worst audience for a movie about a visual artist because I’m truly a snob about the way artists are portrayed in books and movies. I wasn’t born that way. I worked hard to become a snob, seeing art diligently over the years and reading history and then writing about art for a dozen years — during which time I spent countless hours in artists’ studios, talking to them, watching them work, talking about their work with curators, conservators, collectors and fellow artists. It’s harder to get an artist’s work and life right in a movie than it is for any other creative subject, except maybe a writer. Musicians and actors and other kinds of performers create their works in public, or at least communally, and watching it happen is highly narrative and visual — tailor-made for film. Writers and artists so often work alone. While it’s tempting to think that watching painters paint or sculptors sculpt will be vitally visual, it’s often dull, as it should be. Making art is usually a slow, methodical process with a lot of planning and staring and procrastination. (Even in Pollock, which was not bad as an artist biopic, Pollock’s action painting, slinging paint from his bucket over the canvas, cigarette in mouth, went only so far as compelling action for a viewer.) And it’s very difficult to verbalize the process of making art in terms that don’t sound pretentious or silly or just nonsensical. The great photographer William Eggleston said: “Whatever it is about pictures, photographs, it’s just about impossible to follow up with words. They don’t have anything to do with each other.” It’s why attempts to make a reality-contest show about art-making haven’t fared well. With fashion, food or singing, the terms of the genres are understood by a large public. Art remains stubbornly esoteric. Directors who take it on as a film’s primary subject have their work cut out for them. I have tremendous respect for those who’ve tried. But I have to say, I wish most of them hadn’t.

MCCARTHY Still, clashes between artists and those philistines and money people who would force them to compromise can provide the grist for strong drama, especially when the audience knows that the suffering genius onscreen was “great.” Exhibit No. 1: Vincent Van Gogh, who has had more films made about him than any other painter — Vincente Minnelli’s Lust for Life, Robert Altman’s Vincent & Theo, Maurice Pialat’s blunt, unsparing Van Gogh, 2017’s animated Loving Vincent and now Julian Schnabel’s At Eternity’s Gate. Willem Dafoe now has an Oscar nomination for his portrayal of Van Gogh — poster boy for the bold, turbulent artist who could paint and do little else, was misunderstood and neglected by the know-it-alls of his time, and, after a fashion, died for his sins. 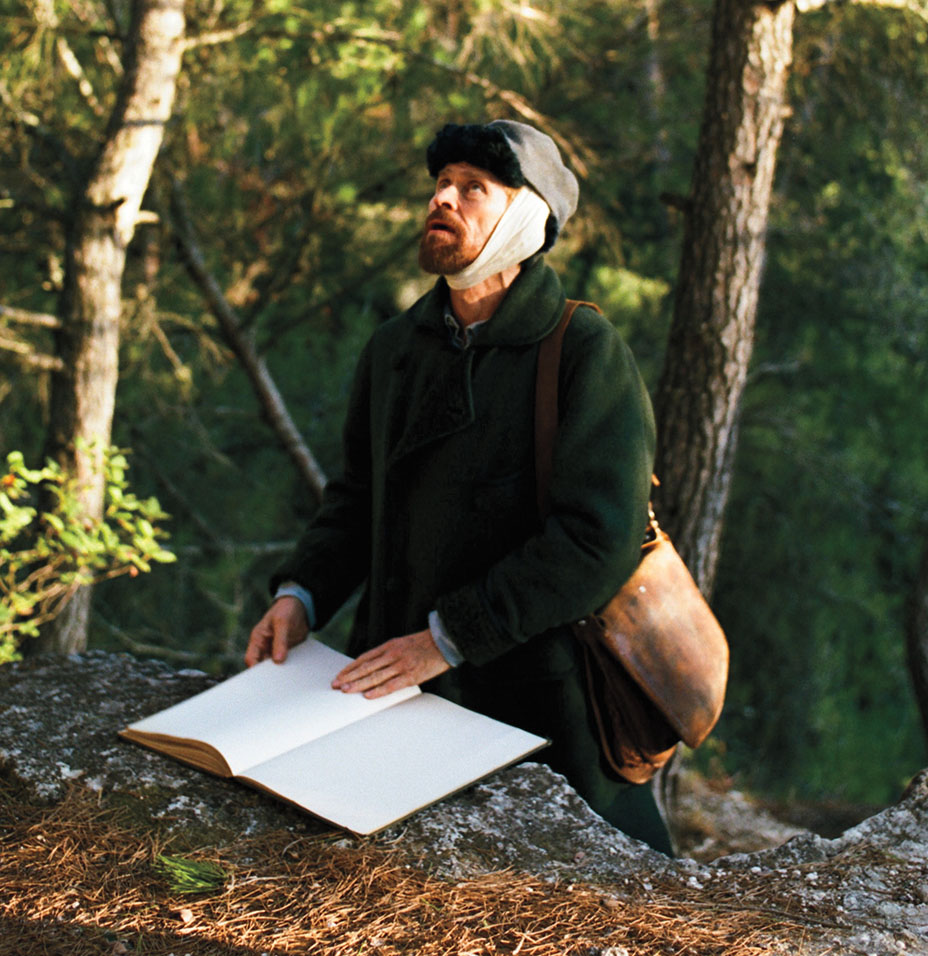 KENNEDY At Eternity’s Gate ranks as one of my all-time favorite artist films. Schnabel and Dafoe get at a very delicate, elusive sense of his terror at what his brain is doing to him and his simultaneous elation at what it allows him to communicate with paint. Like all biopics, it sometimes trips dealing with the narrative pressure of our foreknowledge of the fame the poor protagonist will eventually achieve. But the movie is very good at capturing — with little preachiness or dumbing down — the sense of a misunderstood artist’s life. And the scenes of art making, en plein air, are deeply convincing. (On the other end of the spectrum, Florian Henckel von Donnersmarck’s Oscar-nominated Never Look Away, based on the life of German artist Gerhard Richter, is an awful movie, in which art serves as little more than a highbrow backdrop for a thriller plot.)

MCCARTHY Some of the moments that stuck with me are the silent ones when, essentially, the painter goes to the office; he follows his routine, walking into the country, deciding where and what to paint, sizing up the weather and getting on with his work. And the moments when he’s adding little touches to his portrait of the chatty man, small adjustments that make a big difference, making sure he gets it just right. I imagine only a real painter, like Schnabel, would indulge in these moments because nothing’s really happening when, in fact, this is where everything is happening. It’s very difficult, and more often than not bogus, for films to pretend to show where inspiration comes from, but Schnabel is able to indicate it. Looking back, there have been several different ways the cinema has approached the creation of visual art. One of the most prevalent modes is to portray the artist as a borderline-insane obsessive, as in Jacques Becker’s 1958 Montparnasse 19, starring Gérard Philipe and Anouk Aimée in an account of the final year of Modigliani’s life, and such early Ken Russell outings as Dante’s Inferno and Savage Messiah. Related to this in the life-is-hell department is Russian director Andrei Tarkovsky’s 1966 Andrei Roublev, considered a masterpiece by many. A more recent example is Bruno Nuytten’s Camille Claudel, with Isabelle Adjani as the sculptress and Gerard Depardieu as Rodin. Overcoming great adversity in order to put paint to canvas was certainly the central theme of Jim Sheridan’s My Left Foot, about the Irish artist Christy Brown. Then there are the films that concentrate on the painter-model relationship. Perhaps the most popular, both as a novel and film, was Girl With a Pearl Earring, which speculated about the creation of Vermeer’s masterpiece and was quite attentive to the matter of the painting’s creation. I don’t think any film has examined the relationship between painter and model as thoroughly — and at such great length — as Jacques Rivette’s La Belle Noiseuse. And in this regard, one must not forget José Ferrer as Toulouse-Lautrec in the 1952 Moulin Rouge. Directed by John Huston, who more than dabbled in painting himself, this wildly colorful melodrama was probably the most commercially successful film about a painter ever made during the classical Hollywood era, a fact no doubt attributable more to the lavish musical numbers than to the growth-stunted artist.
There is a small subset of films about how certain successful painters handled their careers, notably Mike Leigh’s Mr. Turner, which devoted an unusual amount of time to transactional affairs. But nothing in this realm can compare to Tim Burton’s Big Eyes, which concentrated on one of the most preposterous artistic cons ever put over on, and embraced by, the public.

KENNEDY I’ve seen several of the films you mention, though not all. (New playlist! Thank you!) I have to say, my all-time favorite film about artists — and it’s not really fair in this context because it’s a documentary — is Terry Zwigoff’s Crumb, about the life of the maverick cartoonist/illustrator R. Crumb. It reached some very deep territory about why the best artists have no choice except to do what they do and how one such artist did it, in exceptional detail that was never dull. It was weird and funny and heartbreaking. Related to that movie, I also loved American Splendor (2003), about the life of the outsider cartoonist Harvey Pekar, which mixed scripted scenes with documentary and starred Paul Giamatti, just brilliant as a loser artist who finally gets a little of the recognition he knows he deserves. I love La Belle Noiseuse, which, though it gets a little hokey about the dominating persona of the “great artist,” features wonderful, long, incredibly authentic scenes of life drawing, with no music and no talking, a brave choice, one that an American director would probably have to fight to achieve.

MCCARTHY Since we’re talking about visual art on the big screen, I have to mention a movie that might not come immediately to mind, Fellini’s very uneven, episodic Fellini’s Roma (1972). The dominant motif in the film is one of the capital’s dysfunction and gridlock, illustrated by a horrible traffic jam that brings the entire city to a standstill. The logical answer to this is to build a subway system, as most other major cities have done, but Rome has special problems in this regard due to its history, much of it buried below ground. The authorities decide to move ahead anyway, resulting in a scene in which workers blast through to a new underground chamber, one graced with beautiful intact wall paintings of Roman citizens perhaps 2,000 years earlier. But the moment air enters this privileged space, the paintings begin to quickly fade and deteriorate, destroying the portraits within a minute or two. The past, the very foundation of Rome, vanishes before our eyes. I think it’s perhaps the most haunting and breathtaking sequence in cinema centered on art.