Last year for the first time, the annual theatrical report compiled by the Motion Picture Association of America gave Asian moviegoers their own category, ?versus lumping them with “other.” The report says that Asian-Americans, a demo long ignored by Hollywood, bought just 7 percent ?of all movie tickets sold in 2017. But the Asian portion of the audience ?for Jon M. Chu’s Crazy Rich Asians rom-com was 38 percent over the Aug. 17-19 weekend, an unprecedented share, accounting for more than $13 million of the film’s five-day debut of $35 million.

It’s the latest win for diversity at ?the box office, where summer revenue is up more than 12 percent over an abysmal 2017 (and up 9 percent for the year). That’s thanks in no small part to an ethnically diverse audience, a sign that Hollywood has left money on the table by often focusing on one demo as attendance has declined.

Most remarkably, the increased diversity at the box office can be seen across summer films of all shapes and sizes — including Jurassic World: Fallen Kingdom, The First Purge ?and The Meg, with each outperforming their tracking.

This summer, Universal’s Fallen Kingdom ($411.8 million to date domestically) drew a more varied audience than 2015’s Jurassic World ($652.3 million). The first film mostly drew Caucasians (54 percent); but for the sequel, 52 percent of ticket buyers were nonwhite. For the first time in the franchise, an African-American, Justice Smith, was cast in a key supporting role. “The general audience grows more diverse as they see themselves included in movies,” says Universal marketing chief Michael Moses.

In May, Disney and Marvel’s Avengers: Infinity War likewise played to a more diverse audience than previous installments, thanks ?in part to the appearance of Chadwick Boseman as Black Panther.

Warners’ shark pic The Meg vastly overperformed with $83.8 million in its first 10 days, double what was projected. The studio credits a ?strong turnout among Hispanics, who made up 20 percent of ticket buyers. Blair Rich, president of worldwide marketing for Warner Bros., says her team marketed the film as a family ?pic to Hispanics.

Another twist on the growing power of diversity at the box office is Universal and Blumhouse’s Purge franchise. This summer’s The First Purge, from African-American filmmaker Gerard McMurray, features all black leads and has grossed $69 million to date, only $10 million behind 2016’s Purge: Election Year. It played to all demos; Caucasian (33 percent), Hispanic (30 percent), African-American (27 percent), ?Asian (8 percent) and other (2 percent). “Revisiting a familiar genre from a fresh perspective is a potent combination,” says Moses.

Spike Lee’s BlacKkKlansman has earned $23 million in its first 10 days to become his most successful film since Inside Man in 2006 after luring a fair share of white moviegoers (40 percent), Hispanics (17 percent) and African-Americans (34 percent). And Sorry to Bother You, the feature directorial debut of Boots Riley, is about to surpass the lifetime gross of Annapurna’s previous biggest film, Kathryn Bigelow’s high-profile Detroit ($16.8 million).

Focus chief Peter Kujawski says ?that while Lee has attracted a mainstream audience for years, the performance of Sorry to Bother You — about a black telemarketer in Oakland who adopts a white accent — is significant. “I give audiences credit for wanting to engage with more diverse stories. These films are straight up working,” Kujawski says.

“The summer of 2018 is notable for the many films that featured ?diversity in casting and points of ?view,” says box-office analyst Paul Dergarabedian of comScore. “Hopefully, the success of these ?films will carry forward the idea that diversity’s just good business.” 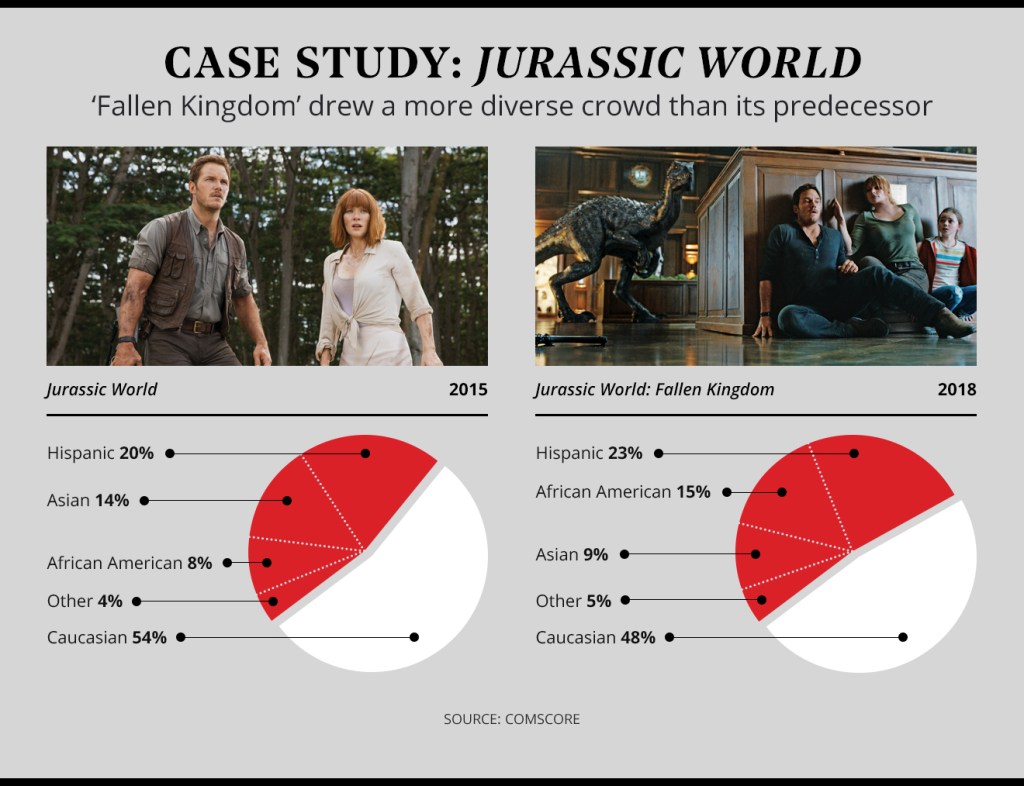 Why James Bond Should Be Black But Batman Should Stay White