Throughout most of movie history, major success for foreign filmmakers meant crossing over to Hollywood. As of late, however, the trade winds of the global film industry have begun to blow the other way. As with so many other areas of international trade, it is China’s growing market power — in the form of its soaring box office returns — that’s driving the change.

Once the biggest stars of the Chinese-language industry — from Bruce Lee to Jackie Chan, John Woo to Ang Lee — went west to bring their careers to the next level, moving from the relative backwater of their home territories to the much larger industry pond of Southern California. Now it’s much more common to see Hollywood talent head east, seeking opportunity in Beijing’s booming film business.

For a timely example, look no further than Animal World, the colorful, youth-oriented thriller from Beijing-based studio Enlight Media currently on top of China’s box office. The film, an adaptation of a Japanese comic book, opened to $38 million over the weekend, kicking off China’s summer blockbuster season. The film features two-time Oscar winner Michael Douglas deploying his signature menace as the mysterious villain, an overseer in an elaborate underground game of chance. Chinese critics have heaped praise on the 73-year-old American actor’s performance. 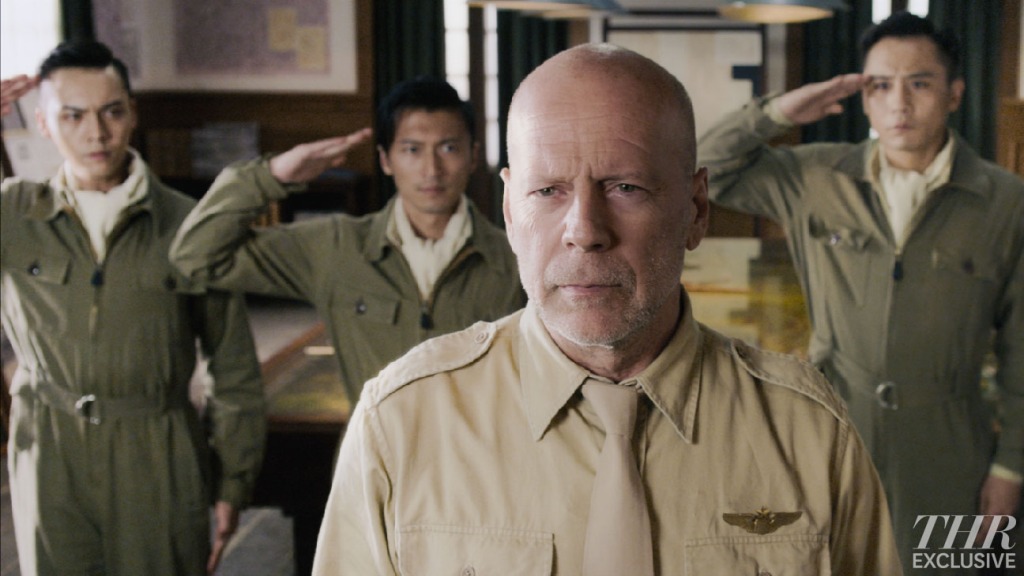 Hollywood stars have appeared in big Chinese-themed films before — most notably Christian Bale in Zhang Yimou’s period action-drama Flowers of War and Matt Damon in Legendary Entertainment’s now-legendary flop, The Great Wall. But in those films, both U.S.-China co-productions initiated by American producers in the hopes of bridging the world’s two biggest markets, the Hollywood casting was justified as a necessary ingredient to help the films win an audience outside of China. In the new wave of crossover castings, the blockbusters are targeting Chinese audiences exclusively, with U.S. stars picked for their skills or their appeal to fans in Shanghai, Beijing and Guangzhou.

One factor fueling the trend is the rapid increase in Chinese production budgets. The first Detective Chinatown film was made for $15 million in 2015, but Wanda splashed out more than $60 million on the sequel just three years later. Unbreakable Spirit, with Willis and Brody, has an estimated budget of $65 million.

Producers say rising budgets are a reflection both of the growth of the Chinese box office, which hit $8.6 billion last year and is expected to surpass that of North America by around 2020, and the Chinese audience’s growing demand for world-class quality from their domestic features. The growing budgets have also rendered Hollywood actors newly affordable. It’s also helped that the U.S. studios, focused on making fewer, bigger tentpole films, have sharply reduced the number of these “mid-budget” titles they produce. China is beginning to step into that gap.

The real boom in West-to-East talent transfer, however, is below the line. Nearly every major upcoming Chinese film has some behind-the-scenes technical or professional involvement from Hollywood, be it a producer, cinematographer, composer, visual effects supervisor or action coordinator. And again, raw market forces mostly explain the change.

“There aren’t enough below-the-line professionals in China to meet the demand of the market and the growing number of domestic productions,” explains Greenberg. “If you’re a Chinese producer, studio or film financier and you want a department head with real experience or — as is more often the emphasis — established credits, then you probably will need to look elsewhere, because there just aren’t enough to go around here.”

Typical of China, one huge hit helped kickstart the trend. When Wu Jing was making Wolf Warrior 2, which he co-wrote, directed and starred in, he was introduced to Marvel mainstays Joe and Anthony Russo, who had signed a collaboration agreement with Wu’s studio backers Beijing Culture. The Russos offered to introduce Wu to some of their usual technical collaborators, and the Chinese filmmaker took them up on the offer, hiring stunt coordinator Sam Hargrave, the same action expert behind the stunts in Avengers: Infinity War. American composer Joseph Trapanese (The Greatest Showman, Straight Outta Compton) also came on board to do the score. The veteran Hollywood involvement has been widely credited with helping the film strike upon the winning formula — a patriotic Chinese action flick produced with world-class technical prowess — that so enthralled the Chinese audience.

“It was a very smart move from Wu Jing,” says James Wang, CEO of Huayi Brothers Media, whose own upcoming war film Eight Hundred hired Hollywood effects experts. “Basically, he used the best talent and technicians he could get and combined their skills with a Chinese story. This is what Hollywood has always done for American movies, and I believe this type of cooperation is the right track for us in China.”

Now, nearly every upcoming big-budget Chinese film boasts some Hollywood-pedigreed professional or technical expertise. In some cases, the international involvement is considerable. Beijing Culture’s forthcoming Fengshen Trilogy, a planned big-budget fantasy franchise directed by Wuershan (Mojin: The Lost Legend, Painted Skin: The Resurrection) and reportedly expected to cost as much as 3 billion yuan ($450 million), has hired producer Barrie M. Osborne (Lord of the Rings, The Great Gatsby) as a production consultant, multi-Oscar nominee James Schamus as a story consultant, and Glenn Boswell (The Hobbit, The Matrix) as stunt coordinator, along with a U.S. composer and VFX supervisor, among others.

“I really felt like the lone wolf in the beginning,” says former Hollywood director Renny Harlin (Die Hard 2, Cliffhanger), who came to Beijing four years ago to direct the Jackie Chan action film Skiptrace and never left. “But now it’s not uncommon at all to run into Hollywood cinematographers, production designers or VFX supervisors in Beijing.” After Skiptrace earned $141 million in 2016, delivering Harlin his first hit in a decade, the Finnish director decided to fully relocate from Los Angeles to the Chinese capital. He has since directed two more Chinese features — Legend of the Ancient Sword for Alibaba; Bodies at Rest for Wanda — both due for release later this year. Other A-list international directors, such as Alfonso Cuaron, have expressed interest in making Chinese films. Veteran animators including Rob Minkoff (The Lion King) and Oscar winner Glen Keane (Dear Basketball, Aladdin) are currently developing projects for the country’s emerging animation studios.

As any Hollywood film worker — aspiring or established — will attest, there are fewer opportunities on large-scale theatrical films in Los Angeles than ever before. With television, streaming platforms and mobile entertainment presenting unprecedented competition for audience attention, the U.S. movie landscape has largely bifurcated between huge-budget tentpoles and small-budget comedies and horror films, along with the increasingly scarce assortment of indies (the proposed absorption of 20th Century Fox by Disney will only accelerate the process).

Notes Harlin: “Some veteran professionals from Hollywood have realized that if they still want to see their work on the big screen, China is one of the few great options.”

Europe is also beginning to benefit from China’s upsurge.

“The cost of everything in China is becoming absolutely insane — not only stars but technical people too,” notes Italian filmmaker Chistiano Bortone (Coffee, 2017), who serves as managing director of Bridging the Dragon, a Beijing- and Berlin-based filmmakers association dedicated to forging ties between the European and Chinese film industries.

Bortone notes that China is beginning to tap Europe’s deep pool of artistic and professional filmmaking talent in the same way that Hollywood has for decades. For example, China’s preeminent arthouse star, Jia Zhangke, hired a French director of photography for the first time for his recent Cannes competition entry Ash is the Purest White.

“After all, let’s not forget that many of the greatest cinematographers originally came from Europe,” Bortone says. “Now China is saying, let’s not wait for them to become very expensive in Hollywood; let’s just go to the source.”

“It’s like the world is turning the other way around,” he adds. “In the past, we were outsourcing to China for cheap labor. Now, in the film business at least, they are coming to Europe to do exactly the same thing.”