To play Brad Pitt’s adoptive mother in The Curious Case of Benjamin Button, Taraji P. Henson was paid in the low-six figures and had to cover her own lodging during the three-month New Orleans shoot. “The math really is pretty simple: There are way more talented black actresses than there are intelligent, meaningful roles for them,” she wrote in her 2016 memoir, Around the Way Girl. “This is exactly how a studio can get away with paying the person whose name is third on the call sheet of a big-budget film less than 2 percent what it’s paying the person whose name is listed first. I knew the stakes. … If I pushed for more money, I’d be replaced and no one would so much as blink.”

The institutional obstacles that contribute to the gender pay gap are compounded for women of color, who encounter even fewer significant opportunities, both in front of the camera and behind the scenes, than white women. Less experience means lower pay, which means a lower quote, and with the supply of underrepresented talent outweighing demand, less leverage to negotiate for more — a vicious cycle.

Persistent perceptions that there’s less of an audience for stories featuring people of color — that “black projects” don’t play overseas, and Asian- and other minority-led projects don’t perform domestically — contribute to sustained lowballing. “If your analysis starts with, ‘We can’t even fill out the line item for foreign,’ you are immediately discounted as not as valuable,” says attorney Darrell Miller, whose clients include Angela Bassett, Courtney B. Vance and Luke Cage showrunner Cheo Hodari Coker. “That myth has hurt a lot of product of color, and it’s still a problem with the middle-aged buyers who are the proverbial gatekeepers, who in fact enforce that misperception by not buying content of color.”

Race may in fact be a greater exacerbator of pay disparity than gender in some cases. According to the WGA’s 2016 Hollywood Writers Report, white men earned a median of $133,500 in 2014, whereas women collectively made a median of $118,293 and non-white writers even less: $100,649. Although the Guild declined to provide specific data for women of color, Asian writers collectively earned a median of $115,817; black writers $99,440 and Latino writers $84,200. The median earnings for Native American writers was $152,500, but there were only five employed Native scribes in 2014.

As a result, adds Miller, “People of color concede [in negotiations] quicker because they infrequently get golden opportunities. The issue goes to the lack of diversity in the content being made. When there’s more, that shifts the ability to have real leverage for people who are fortunate enough to be there the one year they’re making Black Panther.” 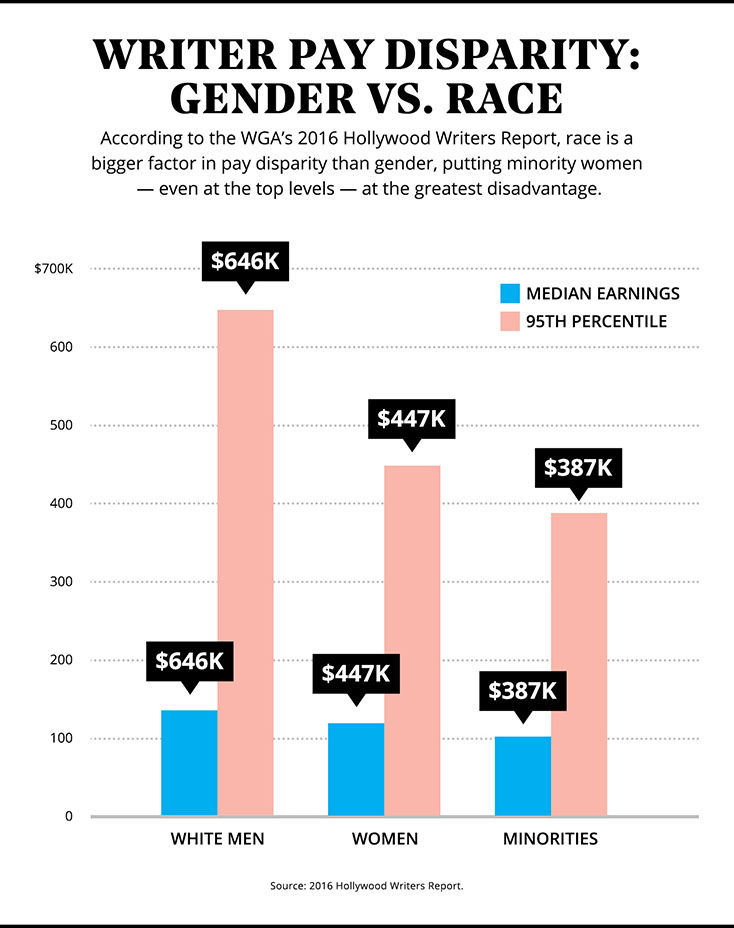 A version of this story first appeared in the Jan. 17 issue of The Hollywood Reporter magazine. To receive the magazine, click here to subscribe.