Jane Fonda is taking a page out of Nancy Pelosi’s stylebook.

The Grace & Frankie actress has made headlines in the past month for her repeated arrests while protesting climate change during so-called Fire Drill Fridays in Washington, D.C.

Her outfit of choice for these occasions? A thick red coat reminiscent of one the Speaker of the House donned in January. Pelosi inspired memes and trends alike when she wore a red Max Mara coat (and dark sunglasses) while walking across the White House lawn after a showdown with President Donald Trump. Shopper demand for the coat was so high that Max Mara reissued it and said the brand was “honored” Pelosi chose its garment.

Fonda similarly selected a red coat as her uniform during her multiple showdowns in D.C., wearing the wide-lapelled coat with a black beret on Oct. 18, without a hat on Oct. 25 and with a fedora and sunglasses on Nov. 1. The look, combined with handcuffs, has inspired fan art, Halloween costumes and fashion commentary. “It’s the last thing I will buy. I bought this on sale because I needed something red. And I’m not going to buy anything more,” Fonda told NPR of the coat, referencing her eco-friendly fashion sense.

She later told The Hollywood Reporter that she bought it for $500 on sale at Neiman Marcus: “I’m speaking out against consumerism and so I have to walk the talk.” Some fans speculate it’s a $750 Mai wool coat.

The activist did give it up for one night, a night she spent in jail. Fonda told reporters once she was released, “There was a woman who was very cold and I loaned her my coat. … But I did have to take it back: It was my mattress.” 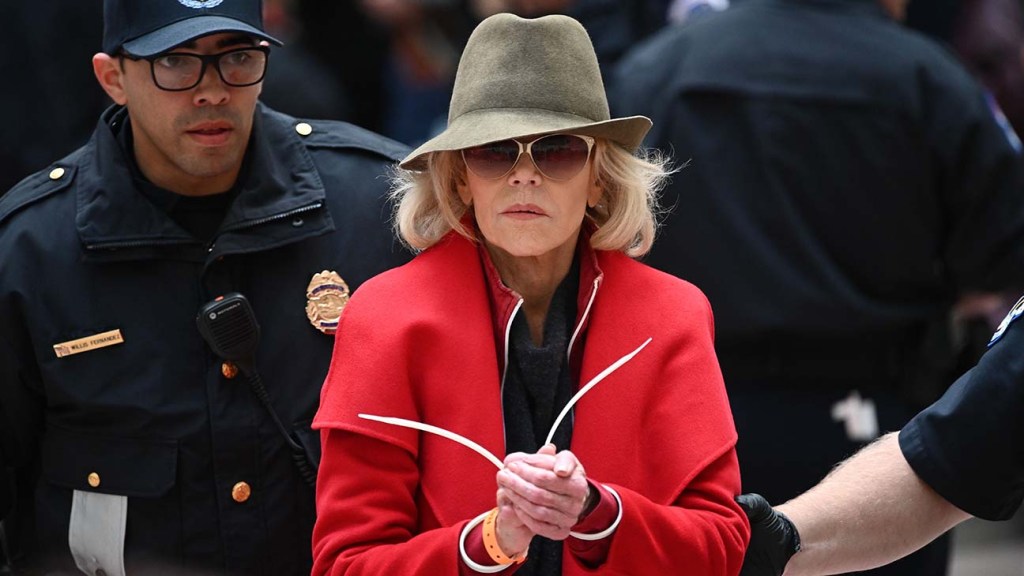 Fonda said she opted for red due to the “fire” connotation in her Fire Drill Fridays, the name of which was inspired by activist Greta Thunberg saying that people should act like their house is on fire when addressing climate change.

Though Fonda’s stylist, Tanya Gill, declined to comment or confirm the name of the label, Hollywood stylists and fashion designers tell THR why a crimson coat has become such a forceful symbol for women in 2019.

“Jane could not have chosen a more perfect coat to protest with,” says Andrew Gelwicks, stylist to Catherine O’Hara. “Not only does she look beautiful in it, but it demands attention and allows her to keep the rest of her look simple. A red power coat does all the work — the rest of the outfit can relax.”

Adds Caleb McLaughlin’s stylist Darryl Glover: “It’s Jane Fonda — she can! A red coat says, ‘I am who I am, and I want what I want!'” He says it goes beyond a statement and even adds a little spice to the occasion. 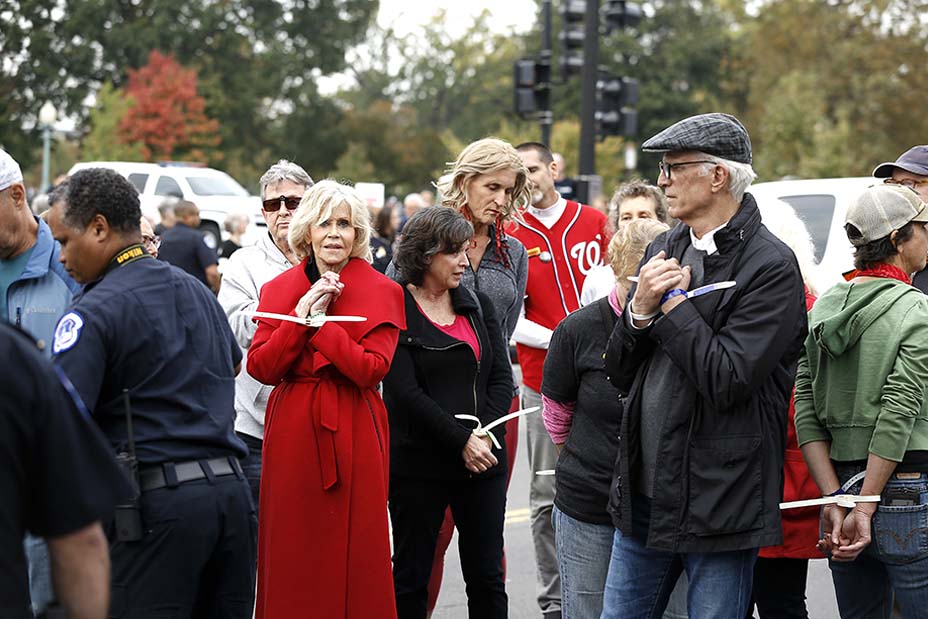 The color itself sends a strong political message. “Red is powerful. It is the color of action, confidence and courage. These are are qualities that Jane, an icon, personifies in her fight against climate change,” says stylist Rhonda Spies, whose clients have included Thomas Sadoski and Finn Wolfhard.

Micah Schifman — stylist to Camila Morrone, Patricia Clarkson and Isla Fisher — agrees that red is the color of power. “Almost in the sense that ‘red’ is a verb or an action word,” he says, explaining that the hue demands attention, not only by standing out in the crowd but also that the color is a statement of its own.

“She’s protesting against something she feels passionate about, and her red coat reaffirms that,” Macdonald says. “She is more visible in red, so no one can miss her presence, and it makes her exude strength and glamour at the same time. Her coat says, ‘Don’t mess with me,’ and it also warns that she won’t tolerate being silenced for a cause that she believes in.”

Bo Yong Kim, creator of fashion brand Storets (worn by Jessica Biel, Margot Robbie and Selena Gomez), believes that the color red has become a passionate and confident proclamation in fashion in a larger sense. The image of Fonda in her bright outerwear can encourage girls to be unafraid of using their voices, Kim says.

“A woman in red sends a message very clear: We show no fear and we have a strong desire to be understood, heard and appreciated,” Kim adds. “Jane Fonda’s coat and smile is a call to all women across the globe. She is announcing with her choice and action to stand up for what she believes in.”