More than six ?years after last gracing HBO with new episodes, Curb ?Your Enthusiasm and Larry David spent season nine with a faux fatwa on the head of its cantankerous lead. Larry ­— that is, the show version — dodged imaginary assassination attempts and, more interestingly, references to Donald Trump. It was the 2016 election that inspired David and friends to revisit their comedy, ?but you wouldn’t realize that while watching the show. The subject was avoided entirely, in favor of familiar awkward interactions with the bevy of guest stars — Bryan Cranston, Lin-Manuel Miranda, Jimmy Kimmel, Carrie Brownstein, Lauren Graham, Elizabeth Perkins, Judge Judy Sheindlin — who paraded before the camera.

Getting the band back together seemed to work out well for all parties. HBO, David and showrunner Jeff Schaffer, 48, quickly agreed on a 10th season, expected to start filming as soon as later this year.

'Curb Your Enthusiasm' Renewed for Season 10 at HBO

You must have had a lot of story ideas after so many years off between seasons. Any of them not make it into the 10 episodes?

There are definitely stories we didn’t get to, and we are doing them [in the 10th] season so I can’t tell you about them. Larry is quite averse to spoilers. You know those ladies that don’t know they’re pregnant and go to the bathroom and then a baby comes out? Larry wants the season to be a bathroom baby — it just appears with no warning at all.

A lot of people were surprised by the news that season 10 would come so soon after the ninth. Why the quick turnaround?

The world is still annoying. Just as worldwide temperatures and ocean acidity are rising, so too is the level of boorish, irritating behavior. It’s like global warming but with assholes. 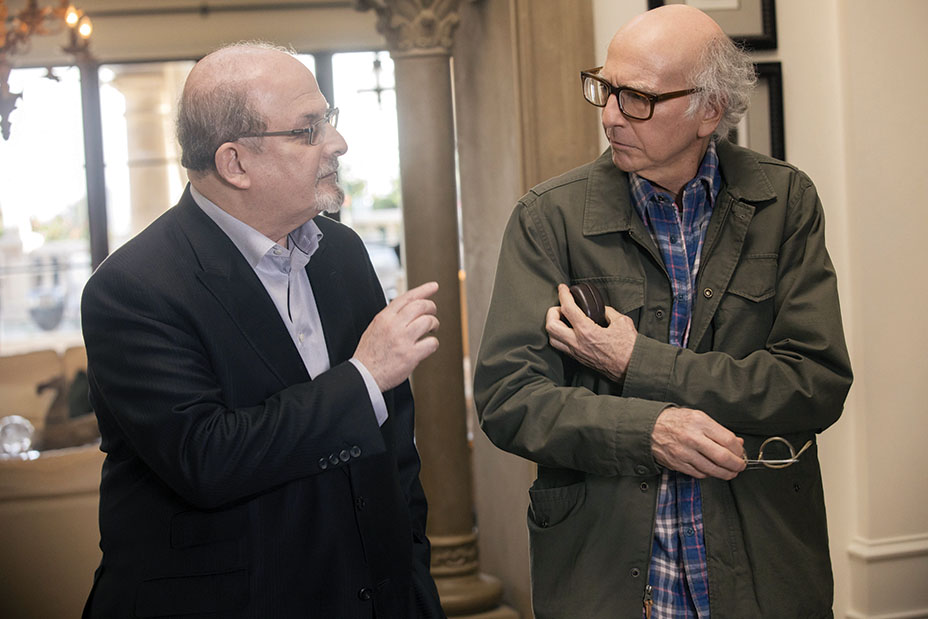 What would you say is one of ?your favorite lines of dialogue from this season?

It’s not a line but a concept. One of my favorite moments of the season was having Salman Rushdie — who currently has an honest-to-God fatwa on his head — talk to Larry about the benefits of having a fatwa (“Can’t pick you up at the airport. Sorry, fatwa.”) including fatwa sex, the best sex there is.

What’s the most unexpected response you’ve gotten to the show?

People thinking how difficult it must have been to shoot the musical numbers from Fatwa! The Musical. Nothing could be further from the truth. Susan Stroman choreographed it, professional dancers hit their marks, the song was written. It was actually the one time all year I knew where the actors were going to be and what they were going to say.

The over-10-year process to make another pair of Larry’s iconic glasses. They stopped making that style a long time ago and he’s only had one pair with clear lenses for the last few seasons. If those had broken, we would have had to shut the show down. 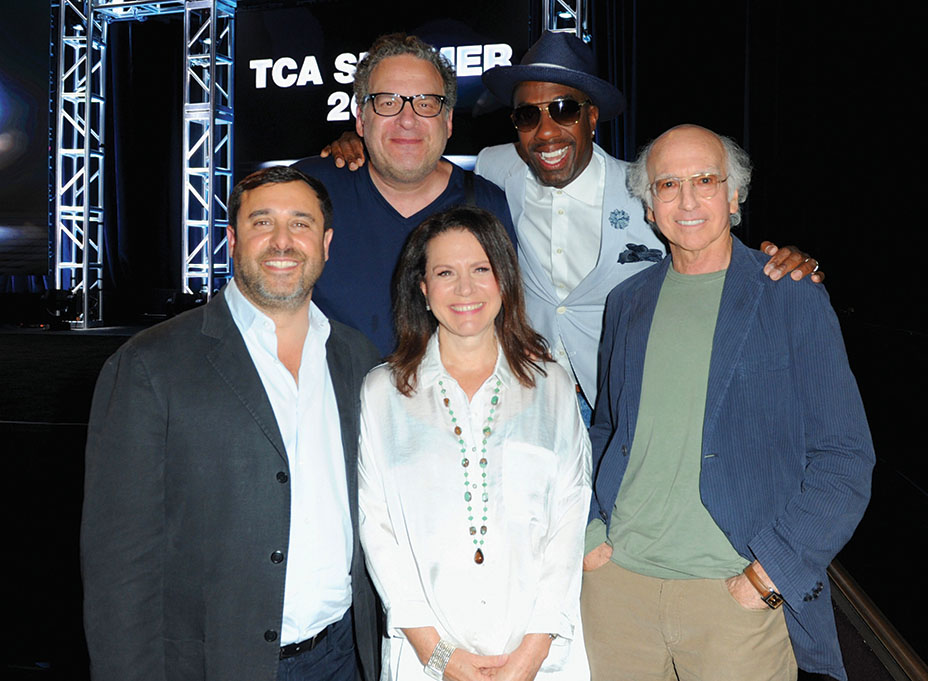 “So what’s Larry really like?” You’ve seen the show, there’s not a lot of getting into character. He even wears his own clothes, which can be a pain for continuity when he forgets to bring them to set.

Which of your cast is best suited to run for office?

Susie Essman. I think we would ?all like to see a presidential ?debate where she calls Trump a “fat fuck.” Larry running would ?be interesting, but I’m not sure how his platform of “Never waiting for seconds at a buffet” and “No chat-and-cuts!” would play in the red states.

The cast of Vikings. I hope they are ?there. Otherwise I may have to crash ?the Scandinavian Emmys.

There’s only one man ?who can give David advice ?on being the subject of a fatwa: Salman Rushdie, who made a surprise cameo as himself in the third episode of the ninth season. The storyline was written into the show before ?David and executive producer Jeff Schaffer even knew if Rushdie was available. “There are not a lot of famous, prize-winning novelists with fatwas. ?So we were just like, ‘I hope ?he does this!’ ” Schaffer told THR. Rushdie agreed to appear, and also agreed to keep the cameo a surprise until it aired. He even made a visit to Late Night With Seth Meyers ahead of the episode’s release, and did not let anything slip ?about the upcoming appearance. “We were amazed that none of it got out,” says Schaffer. “Larry was telling Salman when we were shooting, ‘Look, you can’t say anything about this, ?we want to keep it a secret so no one knows until the show airs.'”

“HBO’s wink that Larry David was still Larry David rang ultra-true in the ninth-season premiere. Season nine should be, as expected, pretty, pretty good. ?At this point, of course, even the bits that don’t work as seamlessly as you might want (not a new issue) pale in comparison to the joy that comes from watching Larry try to wriggle out of an endless amount of sticky situations.” — Tim Goodman, Oct. 1, 2017

When Larry David’s self-satire debuted on HBO nearly 20 years ago, ?it existed in the comedic shadow of Sex and the City — regularly scoring comedy nominations, ?starting with its second season, but never topping Emmy icons Friends, Everybody Loves Raymond, 30 Rock or Modern Family. Curb might be an enduring?Hollywood favorite, cherished for its acerbic spoof of the industry, but its Emmy track record, quite frankly, sucks. The 43 nominations to date have produced a meager two wins — one for editing and another for directing. To take a top category this late in its life span, particularly after a season that many deemed superfluous, seems ?next to impossible. But ?this is a year of dark horses, and there are zero doubts about this pony’s pedigree. — Michael O’Connell