Before tackling Mortal Kombat, Simon McQuoid made a name for himself as a commercials director with a feature filmmaker’s instinct. His spots were big, they were emotional, they were cinematic. Among the early head-turners was a 2011 ad bringing together many of PlayStation’s greatest characters. It landed him at WME with agent Dan Cohan (the two are now at ICM). Then a 2016 Duracell spot took McQuoid to the Star Wars galaxy and lit the internet ablaze. It also caught the eye of Mortal Kombat producer Todd Garner, who was convinced McQuoid was destined for features.

As McQuoid eyed the world of film, he had one request: he didn’t want to do a video game movie. As he recalls telling his agent: “The first movie out, I think it shouldn’t be a video game. I’ve done video game commercials, and I get it, but let’s try to get something other than that.” Still, Cohan wanted to send McQuoid Mortal Kombat. The filmmaker balked once again, but at his agent’s urging, he gave the script by Greg Russo a read, and he found himself connecting with the story and thinking just maybe this could work.

“When I read the script, I thought, ‘Well, there’s enough here that if we can have this elegance and this cinematic beauty and authentic grit inside it, then maybe we can do that,’ ” recalls the filmmaker.

He soon learned the team at New Line had similar ideas, and together they crafted a bloody, R-rated adaptation of the video game, the first since the successful 1995 feature and its ill-fated 1997 sequel.

Now, the film is in theaters and on HBO Max as of today. In a conversation with The Hollywood Reporter, McQuoid discusses filming on location in his native Australia rather than on green screen and the last-minute tease at the end that nods to the Mortal Kombat mythology.

What did you learn from commercials that you’ve carried over to film?

To make the work better, I try to listen and curate. I have a singular vision, but so many of the good things  in this movie aren’t out of my brain, they are out of other people’s brains. I’d be an idiot to ignore them. There are so many talented people you work with. I jokingly say as a director you employ people. And you just try to employ people with great taste and let them do their job. Then you just guide what the specific vision is and know how to articulate that. And that’s what I saw in the process.

On social media, you’ve been giving a lot of credit to your craftspeople, who did a great job on this. It seems that you were able make it look more expensive than it is.

With commercials, you don’t always have lots of money. I’ve always been able to experiment and trial and error ways to make something feel more expensive, feel bigger, feel more crafted. I think that’s helped in that sense. It’s not a super expensive film.

You filmed on location around Australia. Did you consider green screen, or was it always going to be shot on location?

I always prefer shooting on location and in-camera as much as possible. I think that you believe it more. It’s something I’ve always felt that you know when something is fake, even if it’s phenomenal visual effects. I tried to shoot as much in-camera and on location as possible and that informs the post-process. It then informs the visual effects companies and the artists working there. Chris Godfrey, the visual effects supervisor – brilliant, brilliant mind – then understands early on that I want to go this very elemental, very real version of fire, version of ice, version of lightning. You don’t just do some stuff and come back to it later and go “OK, what are we going to do?”

And that translates to the fights too, I imagine.

I didn’t want to use veneers and cutaways. Obviously, there are a lot of visual effects in the film, but my intent was to make it feel like you’re not sure where reality stops and VFX begins. I was trying to blur that line to give us this feeling of realism and authenticity. The stuff with Shang Tsung and Mileena and his guards, out in the landscape of Outworld, that’s all shot at the bottom of a disused coal mine. It was a pain to get there and it was logistically tricky, but it’s achievable and we were just smart about it. Bennett Walsh, who is a brilliant line producer, worked it out. He understands the value of it too. 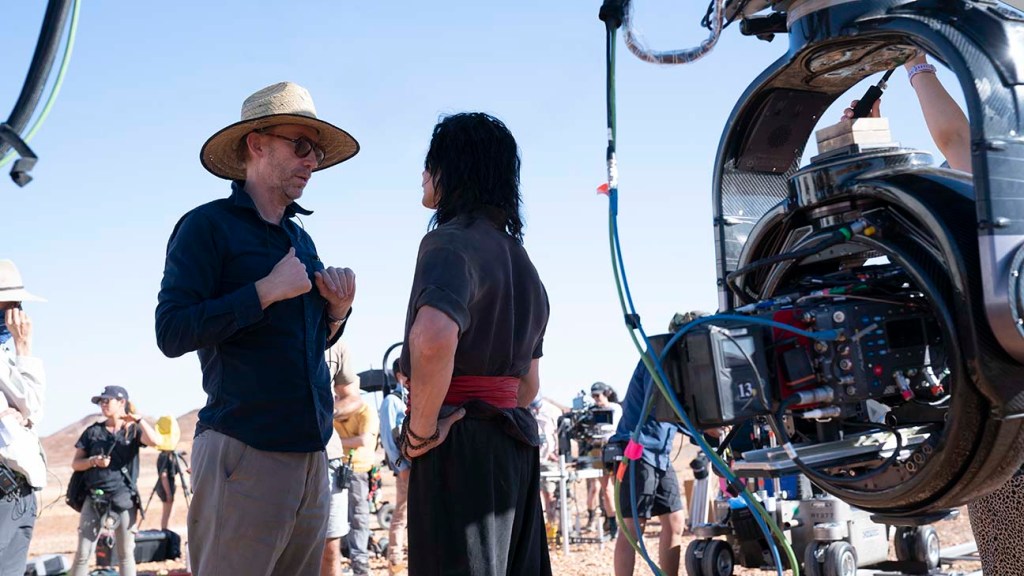 You were delayed by COVID. Did the extra time help at all, creatively?

I’m sure there were advantages and disadvantages to the way we got caught in the particular pandemic swirl. We managed to tiptoe through it so luckily, just pure coincidence. We shot it all out, and then were in post through COVID. In Australia, the restrictions lifted very early. I could go to Sydney, we could be together and finish the post. I think it made it harder that those effortless conversations that you might have while sitting in an edit sweat, where it’s like, “Hey, could we just try this?” All of a sudden, “Can we just try this” when it’s done over email or over Zoom, becomes very official. And that’s not the intent of the person. The person isn’t trying to say, “you must do this.” What they are saying is, “Let’s look at this, I have a thought.” And so you lose that casual nature of that. That was hard.

Were you able to do friends and family screenings? Or did COVID make that impossible?

It made that really hard. There were a couple we did that managed to tiptoe around. We did one early. We got some feedback. It was so early that it was really rough. So we had to take that on board as we analyzed the feedback. Very few VFX in it and then we couldn’t do one for awhile, because we weren’t allowed to. 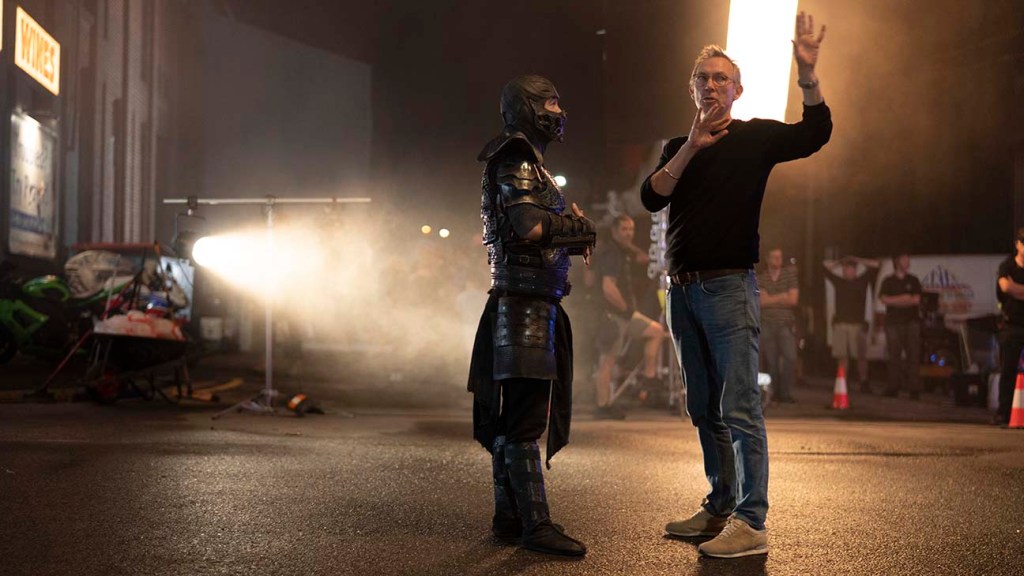 When you think back to all the fight scenes, was there one, in particular, that was the most challenging or that you were most excited to tackle??

I don’t actually have a favorite. I like how they work as a set. And I like how it was planned early on to have multiple facets to the way the fights feel, the way they look, the story we were telling within them. We knew that they had to be a big feature of the film. They were taking up a fair amount of real estate. We believed that the fights become interesting if the story is threaded through them. And there were setups and payoffs and there were ideas that were little gifts. There were a lot of thoughts and discussions around making sure that we got that balance right. When you come to a fight, like the Sonya-Kano fight at the end, there’s something great about at that moment having this dirty fight that ends in a toilet. Right? Because we’ve seen some really dynamic, beautiful fights and then … “OK, it’s time for that.”

This was always R from the get-go? Was there ever a debate over that?

Robin Shou, star of the 1995 film, had to test many, many times because the studio was nervous about having an Asian lead. Now this movie has James Wan and a largely Asian cast. Was that something you all took in, that there’d been some progress since 1995?

We just all believed that we needed to make these characters the most authentic versions of these characters that we could. That then took us to a place that is the film. It was never any discussions, ever, beyond, “OK, what is the right way to make this character fully realized properly?” That was it. Full credit to the studio. They were just like, they wanted to do the right thing from day one.

[Warning: The following question contains a spoiler for Mortal Kombat.]

Late in the movie, you give a nod to a popular character missing from the film. How much did you think of setting up a sequel in this moment?

We knew we needed to lay a little bit of rail towards him. We never talked about sequels. We don’t presume anything like that. It’s very one step at a time. But we did feel that we needed to lay a few joiners, his being one of them. Sub-Zero is another one. Where if we were to go to make other films, then we have the joiners there on things that are very important to the total. We had different iterations, we explored different ways of doing that. In the end we just thought, “Let’s just do it in a really simple, underplayed way that’s not trying too hard and just elegantly moves you into this ripper version of the new Mortal Kombat.”

With one movie under your belt, have you given thought to what’s next? Would you want to tackle a TV show? Another movie?

I want to continue making very authentic, of a scale, character-driven [projects]. I’m fairly genre-agnostic. I’m not someone who only wants to do this or only wants to do that. If I can get the tonal qualities in the script that really fire in my mind, sort of atmospherically. That’s what I’m looking for next. I love spy films. I love heist films. I’m not particularly into horror. There are way cleverer people on this movie doing horror than me. But I would like to do something that continues to be elegant and crafted and has a human connection. I’m reading some things now – that’s what I’m looking for. I feel like I’d like to go into another feature. TV interests me but I want to just keep going on this for awhile.

This interview has been edited for length and clarity. Mortal Kombat is in theaters and on HBO Max now.

'Mortal Kombat': Untold Story of the Movie That "Kicked the Hell" Out of Everyone