Long forgotten in the kerfuffle that ended the 2017 Oscars, when La La Land‘s victory was snatched from its jaws and handed to Moonlight, were Jimmy Kimmel’s tossed-aside words: “I don’t know what happened. I blame myself for this. … I knew I would screw this show up, I really did.”

Perhaps he was joking. Regardless, his comment opened a window on the thinking of one of the few Oscar hosts in recent memory who’s escaped relatively unscathed after his two turns at bat, revealing that even a seasoned late-night host was convinced the first experience would end in failure.

Kimmel’s fears were hardly unjustified. Take a look at the roundelay of performers who’ve embraced show business’ most perilous assignment, and the failure rate is enough to give even that rock climber in Free Solo vertigo. Ever since Billy Crystal passed the baton in 2004 (he made a one-off return that drew a tepid response in 2012), the Academy has struggled to find the right anchor, and nobody has been willing to run the gantlet more than twice. Among the two-timers: Kimmel, Ellen DeGeneres, Hugh Jackman, Chris Rock and Jon Stewart — most of whom have vowed never to do it again (though “never” has a certain elasticity in Hollywood). Contrast that with Oscar’s glory days, when Johnny Carson hosted five times, Crystal nine and Bob Hope a swoon-inducing 19.

All took on the task when there were only three major broadcast networks and the Oscars were a must-see event in a less ruthlessly competitive environment. Now the host is expected to boost the ratings, which means he or she must have wide name recognition; must be funny (without being tawdry), topical (without being controversial), politically savvy (without being too partisan), young (but not so young as to scare the Academy’s governors) and satisfactory to a coalition of competing interests, including the Academy’s president, its sprawling board and ABC — not to mention Donna Gigliotti, who was named to produce in October and who’ll be joined by veteran director Glenn Weiss.

The need to win over so many constituents has put off some of the best candidates, who see little upside in taking on a job that pays only low six figures but requires weeks of work; that usually results in a media flaying; and that does little to boost the host’s profile. 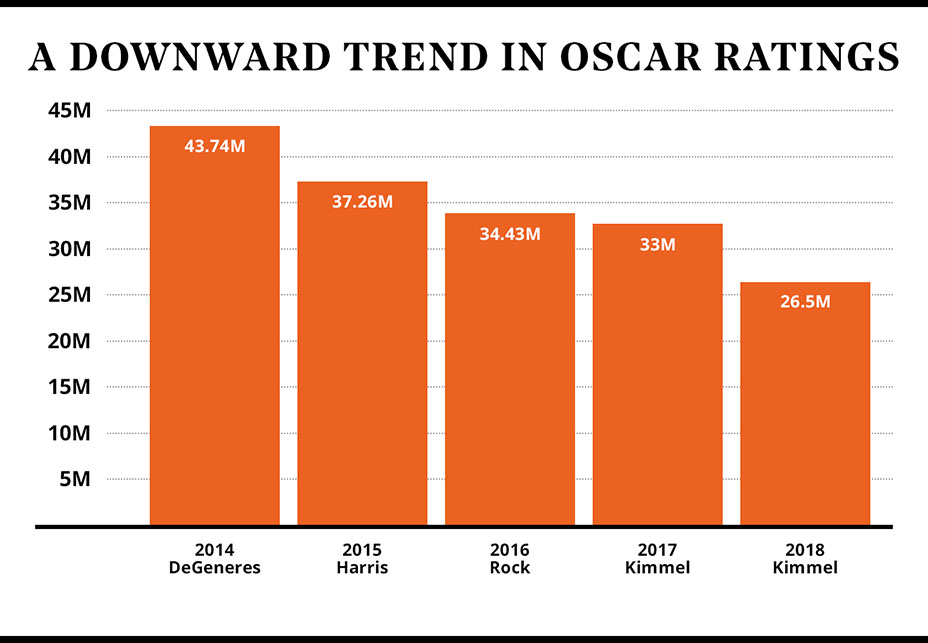 A younger generation that might leap at the chance to host flinches at the memory of how James Franco and Anne Hathaway fared in 2011, when one reeked of sullenness, the other of manufactured charm. As to Seth MacFarlane, his 2013 monologue went down in flames (remember the “We Saw Your Boobs” song?). None seems eager to return. Only Neil Patrick Harris has always declared himself game, perhaps because his star doesn’t shine quite as bright as some other contenders; but his 2015 hosting gig was slammed as “bland” by The New York Times.

Many who might appear perfect to host have sidestepped the job. Oprah Winfrey. Justin Timberlake. Julia Louis-Dreyfus. Jerry Seinfeld. You name them: The more exciting they are, the more likely they are to say no. Even Tina Fey and Amy Poehler, who dazzled at the Golden Globes in 2013, 2014 and 2015, have reportedly passed on the Oscar job. Dwayne Johnson has been mentioned as a Golden Globes host rather than one for the Academy Awards. As to other strong candidates like Stephen Colbert and James Corden, it’s unlikely ABC will agree to a rival network superstar being front and center at its biggest awards show.

So who’s right for the job? Kevin Hart is funny without being tasteless; Sarah Silverman is tasteless without always being funny. Tiffany Haddish? Academy toppers quivered with rage when she mispronounced names at last January’s nominees’ announcement. Samantha Bee, Bill Maher, John Oliver — each could be incendiary in an era when the tiniest ember can set off a fire, which petrifies the Academy leadership.

And there’s the rub: The Academy wants to play safe in an era that rewards risk. It’s time the Academy embraced controversy instead of steering away from it. That’s what Donald Trump did, and it helped him become president.

The more milquetoast the host, the more muted the show. The Oscars might not be ready for a shock jock to become emcee-in-chief, but a little more shock might just make for a whole lot more awe.

This story also appears in the Dec. 5 issue of The Hollywood Reporter magazine. To receive the magazine, click here to subscribe.