First, it was photographers who went after stars who posted unlicensed photos of themselves on Instagram, like Gigi Hadid, Khloe Kardashian and Jessica Simpson. Then, war began between street artists and corporations like Mercedes-Benz over the use of graffiti in ads. Now a hybrid scenario is sparking a wave of legal threats du jour: social media stars posing in front of murals without getting permission to use the art.

These street art selfies are poised to become the next legal battleground for influencers as artists grow wary of their work being associated with brands. “I have had about a dozen of these cases already this year,” says attorney Jeff Gluck, who represents artists in copyright infringement matters. Those cases were resolved without litigation, but experts say it’s only a matter of time before someone sues. “I can very much see graffiti artists pursuing influencers in the same way they pursue brands,” says Ellie Altshuler, an attorney who reps influencers in brand deals. “Deep pockets are there, and they may make the argument that even if it’s not for a direct commercial purpose, their business is creating content and building their following.”

Sources say the going rate for an Instagram paid post is up to $500,000 to $1 million for an influencer with 100 million-plus followers (like Kim Kardashian), while someone with 15 million to 20 million followers (like Liza Koshy) might bring in $100,000 to $250,000. Street art is ubiquitous, and even a cursory search on Instagram returns results for problematic images. “My guess is, you’re going to see a couple influencers get hit hard,” says Stephen Doniger, a prolific copyright lawyer.

Fair use is a common defense in copyright infringement claims and likely would be relied upon in such a case. One of the factors courts consider is whether the use is commercial. But that analysis can be tricky in the age of influencers. “Most of the content posted by social media personalities is inherently commercial,” says Gluck. “Their posts are all heavily curated and strategically trying to build their persona and their business.”

So if an influencer — let’s call her Becky — is paid to endorse pumpkin spice lattes and she poses with her Starbucks cup in front of a Melrose Avenue mural, the argument that her post was commercial in nature is clear. But if Becky just pops by for a pic in front of Colette Miller’s popular angel wings street art at Orlando and West 3rd in L.A. for a nonsponsored post, it could still be considered a commercial use.

When it comes to Instagram-bait like the wings, entertainment litigator Jeremy Goldman argues there may be an implied license. “The context suggests there shouldn’t be liability when an artist is luring people to photograph their artwork for the purposes of social media,” says Goldman. “I don’t think it’s necessarily fair to draw the line that ‘I’m OK with nobodies, but influencers don’t get to participate in the trend.’ “

Many of these issues are at the forefront of a federal court fight between Mercedes and four artists. The luxury vehicle giant shot a series of images with a G Class truck parked and driving near murals on Detroit streets and posted them on Instagram. After receiving threat letters from the artists, Mercedes sued and asked the court for a declaration that the murals are exempt from such claims under the Architectural Works Copyright Protection Act or that the posts made fair use of the art.

Essentially, Mercedes says the murals are part of the architecture of the building they’re painted on and that under the AWCPA, photographing them isn’t copyright infringement. If the court agrees, Gluck (who reps each of the plaintiffs) argues it could render street artists unable to police the use of their work. (A motion to dismiss hearing that was set for Wednesday has been pushed to September 9.) Similar cases involving General Motors, H&M and Oakley have settled before the courts created any substantive new case law, which could very well happen with Mercedes.

“We’re reading the tea leaves,” says Kimberly Almazan, a litigator who specializes in art law. “All of these cases thus far have settled and you don’t know what went on behind the scenes, but I think those are wins for the artists. I think if these companies thought they could win these lawsuits they would continue litigation.”

“If an influencer would get in a tizzy because someone is using their image without permission, they shouldn’t have any qualms about ensuring they have the permission of the artist whose work they’re using on their site,” says Doniger. And tagging the artist in the post doesn’t cut it, adds Altshuler. “There are a lot of people who think giving credit is sufficient,” she says. “If they know who the artist is, the safest thing and the right thing to do is to reach out and seek permission.” 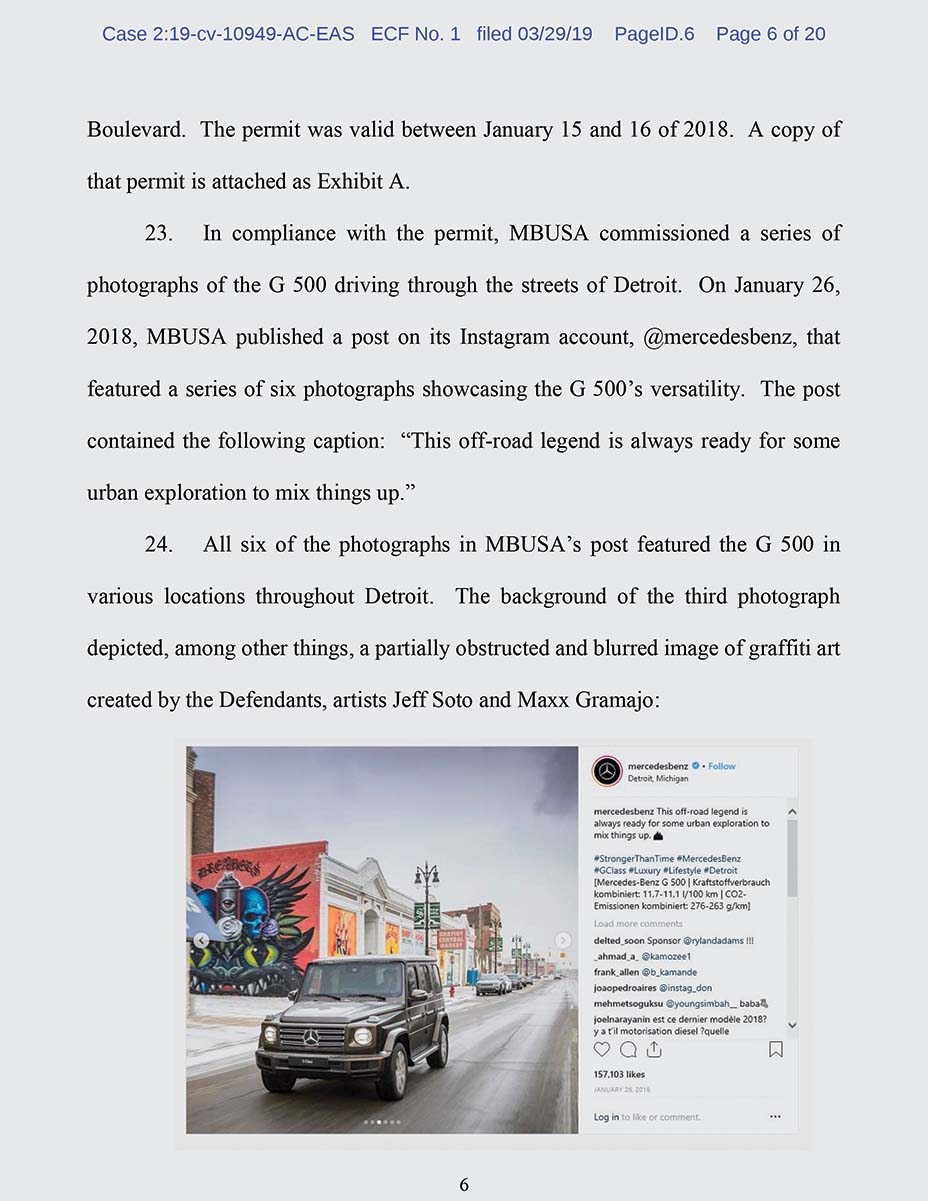 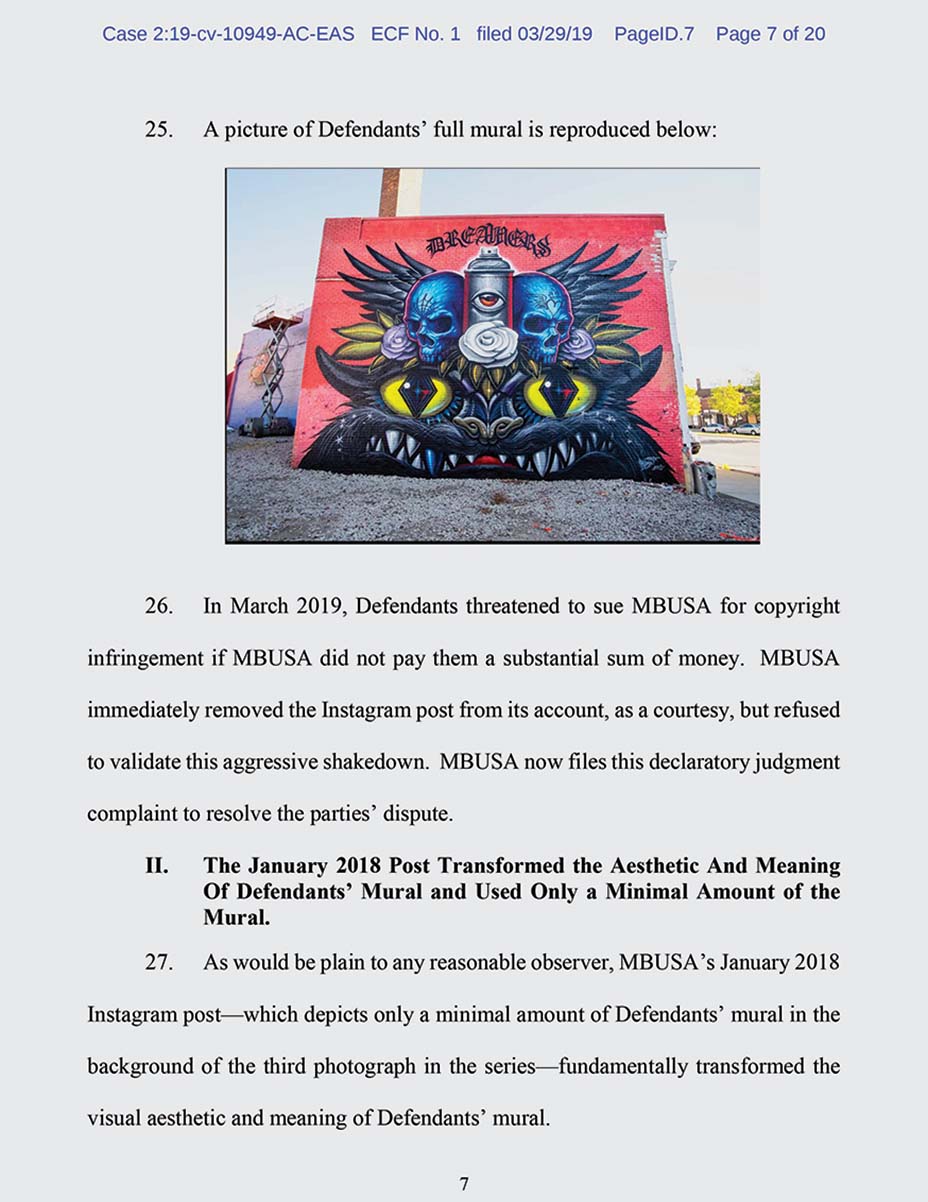 A version of this story first appears in the Aug. 7 issue of The Hollywood Reporter magazine. To receive the magazine, click here to subscribe.