Like most public figures, Mercedes “Sasha Banks” Varnado steers clear of her Instagram’s direct messages, but many months ago, she felt an inkling to check them for a change. Sure enough, the impossible happened as The Mandalorian creator Jon Favreau had reached out to Varnado by way of a casting director. That exchange quickly led to a FaceTime between the two of them.

“One day, for some reason, I was going through my Instagram DMs, which I normally don’t go through, and a casting director messaged me and said, ‘Jon Favreau really wants to interview you for something for Disney,’” Varnado tells The Hollywood Reporter. “And the next thing I know, I got a FaceTime from him and he told me about The Mandalorian. I just couldn’t even believe it. At the click of my fingers, we were shooting on set and now it’s here. It’s so awesome.”

“It was so incredibly cool when I found out that I was going to save him. I just wanted to cry and scream…” Varnado shares. “At the same time, it was so, so hard because that pram is really heavy and with my beskar on as well, it was hard. So he should be really thankful — and I think he is — that I saved him.”

In a recent conversation with THR, Varnado also discusses the wrestling moves she integrated into her performance, the rampant speculation surrounding her character’s identity and Bryce Dallas Howard’s impact on her first role outside of the WWE.

On behalf of the entire world, thank you for saving Baby Yoda’s life. What’s it like to hold him in your arms?

It was so incredibly cool when I found out that I was going to save him. I just wanted to cry and scream, but I felt like I didn’t have time. I was just like, “OK, let’s go! Let’s do it!” At the same time, it was so, so hard because that pram is really heavy and with my beskar on as well, it was hard. So he should be really thankful — and I think he is — that I saved him. (Laughs.) So it was cool.

So did you get a highly secretive phone call one day? How did things get started?

One day, for some reason, I was going through my Instagram DMs, which I normally don’t go through, and a casting director messaged me and said, “Jon Favreau really wants to interview you for something for Disney.” And I was like, “Oh my god, OK!” And the next thing I know, I got a FaceTime from him and he told me about The Mandalorian. I just couldn’t even believe it. I was like, “What? Is this for real?” I’m so used to WWE and the wrestling realm that I could not believe this was happening. At the click of my fingers, we were shooting on set and now it’s here. It’s so awesome. And, at the same time, I’m the WWE SmackDown Women’s Champion, so life is really cool and crazy right now.

What did Jon and Dave (Filoni) tell you about your character’s backstory so you could incorporate that info into your performance?

Well, I don’t want to give away too much because it’s still really secretive. We don’t know where it’s going to go, and maybe it can go somewhere else in the future. I can only manifest it. But they told me that we’re part of the Mandalorian, what our way is and why we’re going to search for Mando. And hopefully we’ll help him to help us find the Darksaber. So that was our story and really, for me, I wanted to bring a real-life sense and emotion to saving The Child. If someone was really drowning, especially someone as legendary as Baby Yoda, you have to put in everything. I also put in a lot of my wrestling character, as well as the moves. Instantly, you see me do a drop kick, an elbow and a fireman’s carry. Maybe Star Wars fans don’t know what that is but my fans do. So I wanted to bring so many different elements to my character that I hope I can explore more and more someday.

You touched on it already when carrying The Child’s pram, but how challenging was it to do the choreography in the beskar armor and helmet?

It was so, so hard. I am so used to wearing really tight, little shorts, sparkling tops and a lot of bling, so wearing the beskar and helmet was really hard. But I’m so thankful for wrestling because I know my body so well. I can do anything, so come and try it! (Laughs.)

I didn’t pay too much attention to it. It was just going to work every day and everyone saying that I was a Jedi. Obviously, I couldn’t say anything so all I could do was smile and say, “I can’t wait for you guys to watch it!” Every single day, it was, “You’re a Jedi! You’re a Jedi!” The fans said so many different things so I was just like, “Oh my gosh, I hope they don’t get disappointed.” But I knew in my heart that they wouldn’t. So I’m excited and I’m happy.

Which wrestler pressed you the most for information?

Everybody! I was so shocked how everybody is a fan of Star Wars. When I went into work after the trailer aired, from the sound guys to our prop guys, everybody was a fan and had so many questions. I was just like, “Um, I still can’t say anything. Keep watching.” (Laughs.)

Since this was your first time acting on a show like this, was it helpful to have Bryce Dallas Howard as your director since she’s also an actor?

Bryce was so incredible. Even before I went on set, she was texting me. I told her that I was so nervous and that I didn’t know what I was doing. But then I thought to myself, “Actually, I’m an actress as well.” WWE is so crazy, intense and full of excitement. And it’s live. Sometimes, we’re handed the script 30 seconds before we go out. So I also had to bring my own energy and belief that I could do this as well. But she was so special and so awesome towards me. Any questions I had or any reassurance that I needed, she was just right there. So I’m just so thankful that she was part of my first ever anything.

On the day, what were you actually slurping in the cantina?

Koska was slurping an octopus. So delicious. My favorite movie of all time is Oldboy, and there’s a scene in that movie where Dae-su slurps an octopus. So when they told me, I was like, “Oh my god, is it going to be real?” but they told me it wasn’t. So I was down to do it if they wanted me to, but it was a big and long udon noodle that I had to slurp. (Laughs.) 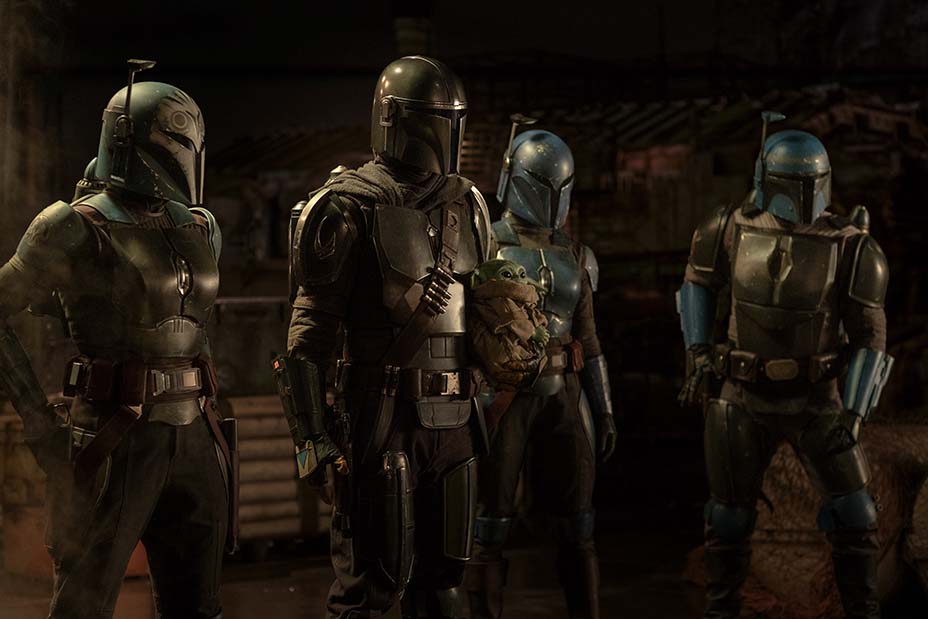 So what was the first costume fitting like? How many adjustments were needed?

Oh my gosh, the first costume fitting was so crazy. I couldn’t believe it. I had to get it tightened just one time, and I walked out on set and showed Jon Favreau and Bryce. They were just like, “Wow, you look like a badass.” And then I went to the trailer to try on the hair. I wanted to cry, but I waited until I went back to my hotel. I was like, “Whoa, this is so crazy.” Again, I’m so used to wearing a certain costume in the ring. To be in a whole different role, to be in something like Star Wars, to be a Mandalorian and wear sacred armor, all I wanted to do was just burst into tears. I’m just so thankful.

And Koska’s cross-braid has added yet another signature hairstyle to Star Wars.

Yeah! That was all the hair stylist’s idea. She just loves Star Wars; her name is Maria Sandoval. She’s been working with them for years. So she just wanted to make something so unique and different because she wanted little girls to cosplay me. And I’ve already seen so many girls tag me in pictures. It’s so awesome.

What was your impression of working inside the Volume?

It really felt like I was on a whole different world, in a whole different galaxy. You could literally walk into that set. It was so real. I was just in awe every single time I was in there. I still can’t believe how they did that.

So when you were sitting down on Mando’s ship, was the ship on the stage while you were looking out at everything else on the screen?

It was in the volume, yeah. It felt so real. I was legit looking at a sunset and the water while on the spaceship. I don’t know how Disney and Star Wars did it, but everything they did, I legit felt like I was in another world.

Would you like to offer any cryptic words about the future of Koska Reeves?

There are no cryptic words to be said. Just like you, I am a fan and I am watching The Mandalorian every single week after I do Friday Night SmackDown. So let’s just keep on watching and hopefully in the future, we can have Bo-Katan (Katee Sackhoff) and Koska Reeves come back. So I don’t know, but I’ll be watching.

***
The Mandalorian is currently airing every Friday on Disney+.