Taika Waititi is a fashion superhero. The proof: When the New Zealand native and director of November’s Thor: Ragnarok showed up at Comic-Con in July, he stole the spotlight from his stars, including Chris Hemsworth, Cate Blanchett and Idris Elba, by pulling off an outfit that almost no other Hollywood man could: a men’s romper look — and in a pineapple print, no less. The getup prompted director Ava DuVernay to tweet that he’s the entertainment industry’s “best-dressed helmer,” and fashion news sites took note, giving him plaudits ranging from saying “this outfit is perfection” to calling him a “style icon.” There’s even a Twitter account, @taika_fashion, that chronicles his looks.

Waititi, 42, is part of a burgeoning group of entertainment-world men with highly original and bold personal style, from such stars as Jared Leto, Atlanta‘s LaKeith Stanfield, Pharrell Williams and Harry Styles to director Paul Feig of Bridesmaids and Spy, who has a line of suits coming out this fall with J.Crew. Because these guys are talent, they — unlike their compatriots in Hollywood’s executive ranks — are afforded a fair bit of sartorial latitude. “Some would call it peacocking. It probably is, but I’ve always loved bright things and things that stand out,” says Waititi during a break from putting the final touches on Marvel’s Thor sequel, his first big studio film. Harking back to the classic comic books and giving the costumes an ’80s edge enabled Waititi to do “a really fresh new take on the whole franchise. That’s one of the things that drew me to it [and because] Chris [Hemsworth] wanted to do something different. He wanted to move away from the version of Thor who was stoic and wasn’t the most interesting element of the film. Whereas now, he is the best character. He spent a couple of years on Earth with Tony Stark and has got this colloquialism now, which is way more relatable for audiences and way more fun.” Adds Brad Winderbaum, vp production and development at Marvel Studios and executive producer on the film: “We met with Taika a few times, and he had a great angle on the character. [Marvel head] Kevin Feige realized this guy could bring something special to Thor. He really wanted to highlight Chris Hemsworth as a comedic force.” Waititi also appears in Thor: Ragnarok via motion-capture as a villain called Korg, and he is currently in talks with Warner Bros. to direct a live-action feature adaptation of the anime classic Akira. 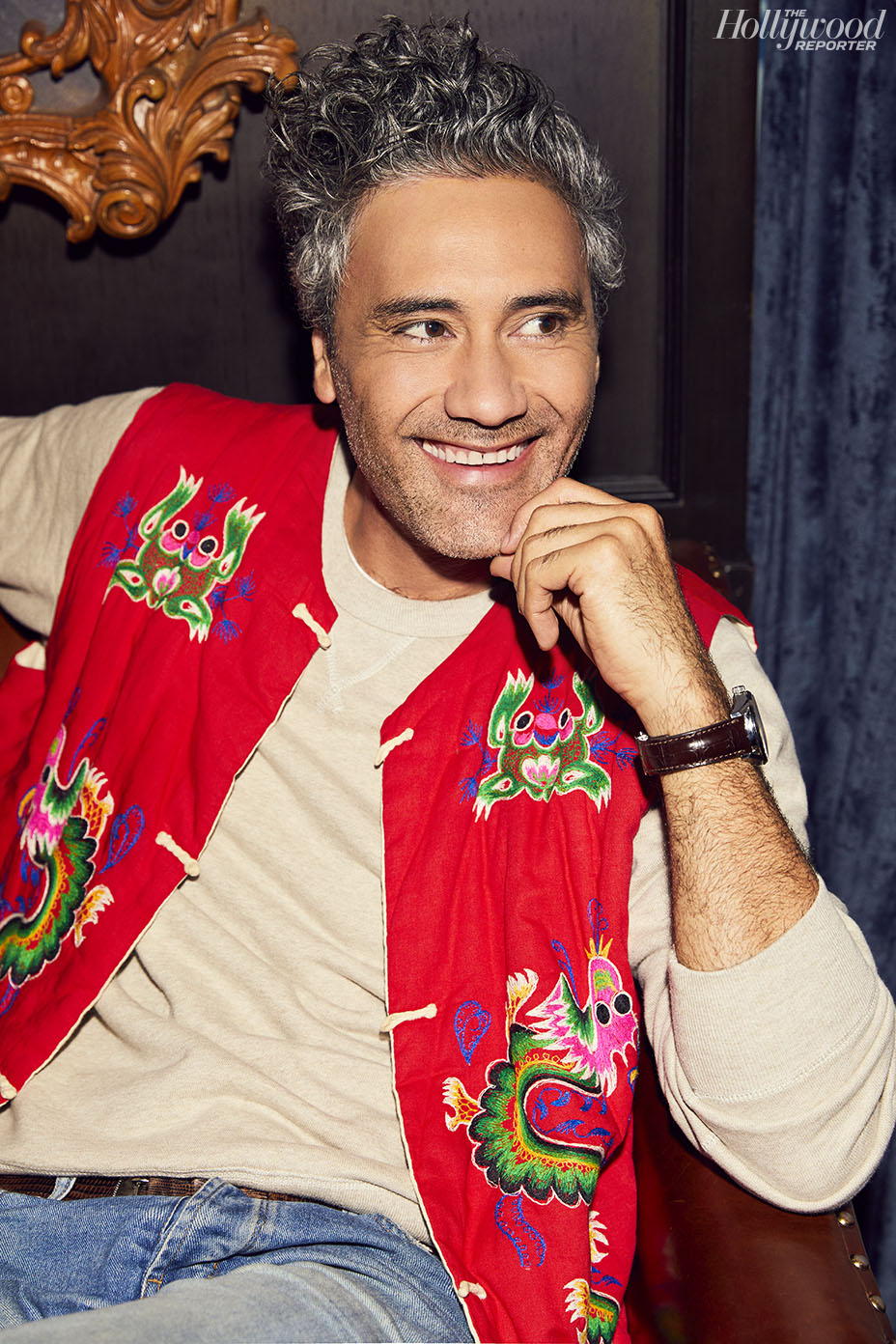 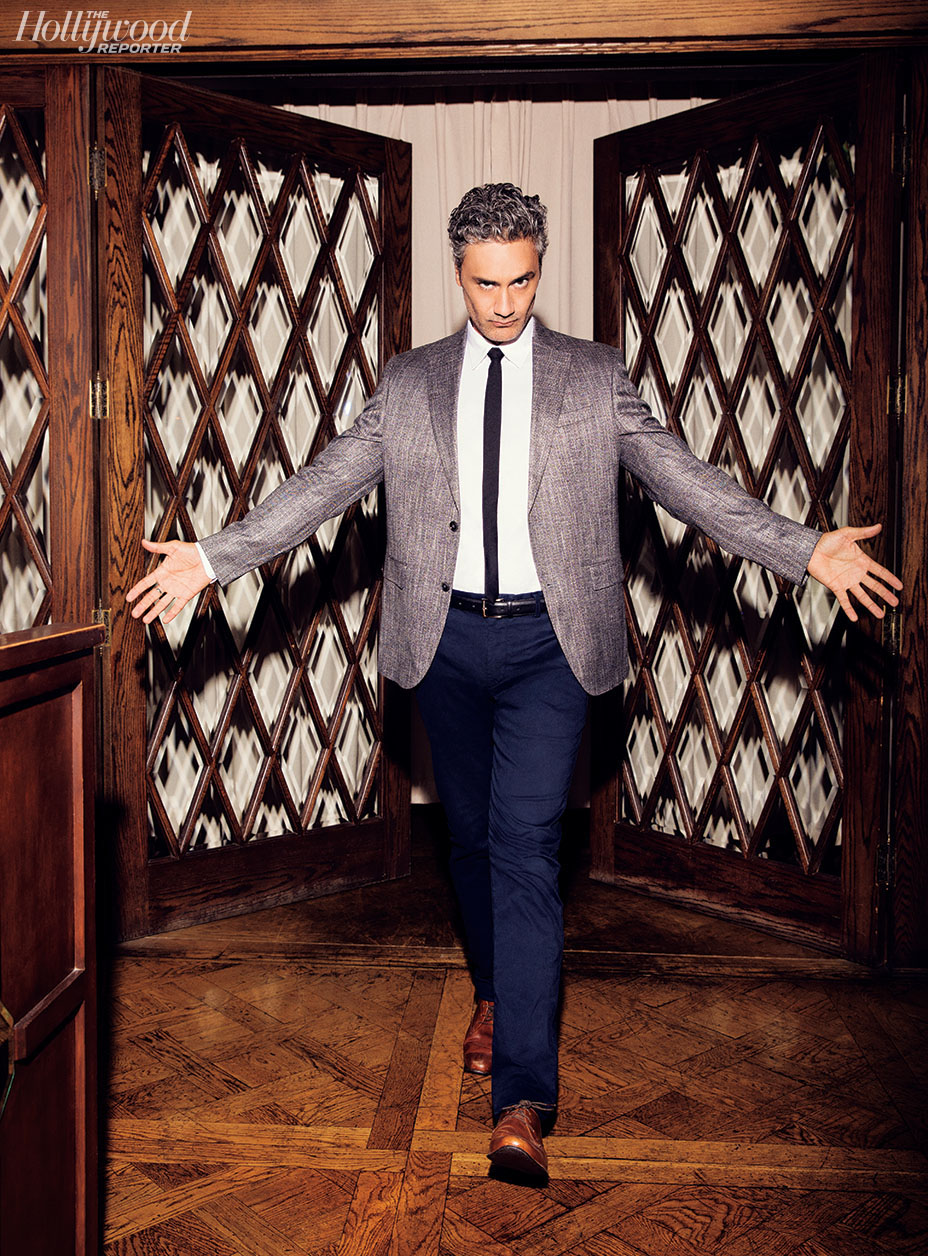 Waititi won the Thor job on the strength of his independent films, which he has described as dealing mainly with “the clumsiness of humanity.” With a flair for fusing comedy and drama in unforgettable coming-of-age stories, he has directed the two top-grossing New Zealand-made films of all time: 2010’s Boy and 2016’s Hunt for the Wilderpeople, which each raked in nearly $10 million in a nation of just 4.8 million people. The latter is about a Tupac-obsessed Maori teen who stands apart in the wilderness with his urban leopard-print baseball cap and dollar-sign-print jacket. “He makes up for his personality by wearing bright colors,” says Waititi. His earlier film, Boy, set in the 1980s, is about an 11-year-old who’s obsessed with Michael Jackson and longs to meet his long-absent father, played by Waititi. He also co-directed with Jemaine Clement (Flight of the Conchords, Moana) the 2014 mockumentary What We Do in the Shadows, in which he plays one of five vampires who share a flat in Wellington, New Zealand. Waititi scored the character with the best costumes: an 18th century dandy turned bloodsucker flaunting lace collars and flouncy sleeves.

But now that he has ascended to the directing big leagues, Waititi hasn’t become any more cautious with his style. Unrestrained patterns and prints are a staple for him, whether it’s shirts covered in mega-polka dots or bananas or bomber jackets, such as the one with a black panther design by Stolen Girlfriend’s Club that he wore to the Sundance premiere of Wilderpeople. Even when he’s rocking a loud print, the cut always works for his body type (which he says he keeps trim by doing intermittent fasting, often restricting daily eating to an eight-hour period). “I don’t do weird shapes. I hate boxy giant shirts. If you push it too far, you’re leaning into a clown look. You have to watch out for that,” says the director, who also can successfully get away with the generally impossible feat of wearing a newsboy cap. Adds Mayes Rubeo, the costume designer for Thor: Ragnarok, “He’s very careful that everything has to fit well. I think design is fundamental for him, and it shows in his everyday style.” 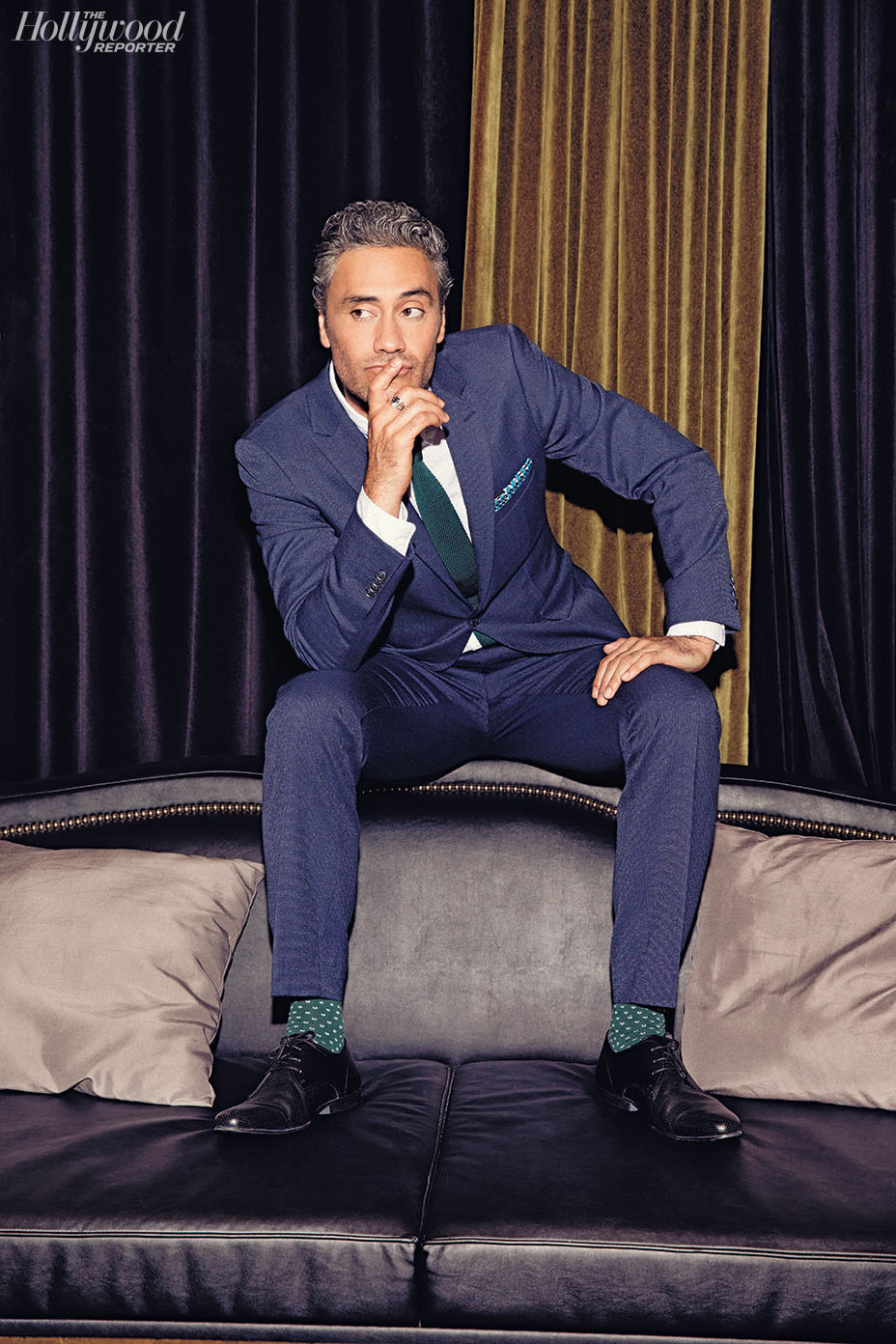 Waititi says that he has never experienced a downside to standing out with his wardrobe in Hollywood. “I don’t ever wear anything conservative in a business sense,” he says, admitting he finds men’s style in Los Angeles lacking. “In Hollywood in general, especially in the studios, it’s a very boring style. It’s very safe. It’s a ‘you might as well be wearing a beeper on your belt’ style, you know. Just tucking in an ugly shirt into some ugly trousers serves a purpose in a way, but you may as well just wear jeans and a T-shirt to work. To me, that’s not dressing well.” On the set of Thor, by contrast, Waititi wore a suit to work almost every day (his favorites are by Paul Smith and Topman), not unlike David O. Russell, another Hollywood style icon. “Ever since I was a kid, I loved the idea of leaving the house and going to work. I couldn’t wait to get a job and actually go to work. So if I’m on a set now, I like to make some effort to present myself,” says the director, who is married to producer-director Chelsea Winstanley (a co-director of the new film Waru, a drama about child abuse in a community of indigenous Maori, which premiered at this year’s Toronto Film Festival). When in L.A., the couple stays in Hollywood; they have two young girls, ages 2 and 5.

Waititi — who was nominated for an Oscar in 2004 for his short film Two Cars, One Night — was raised in a small town of around 300 people in rural New Zealand, the son of a farmer father, who is Maori, and a schoolteacher mother, who is European and Jewish. (Early on in his career, he sometimes went by the name Taika Cohen, using his mother’s maiden name.) He recalls as a kid hungering for images of people of color to look up to. “We were looking for heroes who were like us, you know?” says Waititi, whose childhood idols were Michael Jackson (one of the director’s next projects will be a stop-motion animated film called Bubbles about the late singer’s pet chimpanzee) and Bob Marley. The reggae singer, to this day, inspires his style. “Bob Marley was big into denim, and I love denim,” says the director, who also has become a strong voice speaking out against bigotry, whether on his Instagram account (where his bio states, “Give Nothing to Racism”) or working earlier this year on a campaign for New Zealand’s Human Rights Commission. For that, he created a satirical ad that encouraged people to be “a tiny bit racist,” making the point that micro-aggressions can add up when directed at people of color. “They’ll be getting hundreds of small bits every day. … It will be noticed,” he says in the PSA. 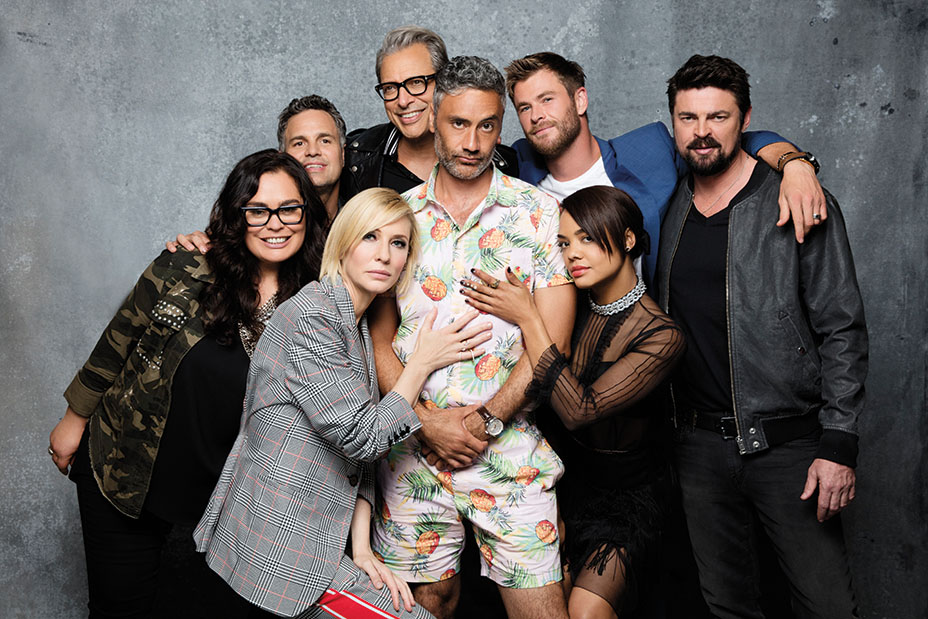 When it comes to style, Waititi — who is based in Auckland but spends lots of time in L.A. — pulls off his idiosyncratic style choices with a dose of braggadocio and humor. “Sorry you’re not me. #god,” he wrote on his Instagram when he posted a shot of his pineapple outfit, which technically wasn’t a romper but a matching shirt and shorts combo by L.A.-based Wallpapr. The company was co-founded in March by cinematographer Kevin Gosselin, who says that after Waititi wore the design, “we were getting orders all over the world the next day.” For another Instagram post in which he wore a denim jacket paired with jeans, Waititi typed, “Yeah it’s double fucking denim. Even the hair is denim. The lesson? Be me. #GodOfDenim.” In photo shoots, he’s known for clowning around, throwing off Zoolander-type poses. “Taika is so much fun,” says Rubeo. “Fun is something you don’t buy. He was born with it.” Adds Waititi, “Making movies is like a fancy job that no one has realized is not really a job. It’s a really sweet, small, little creative corridor that I’ve managed to squeeze into. So I think you’ve got to embrace that.” 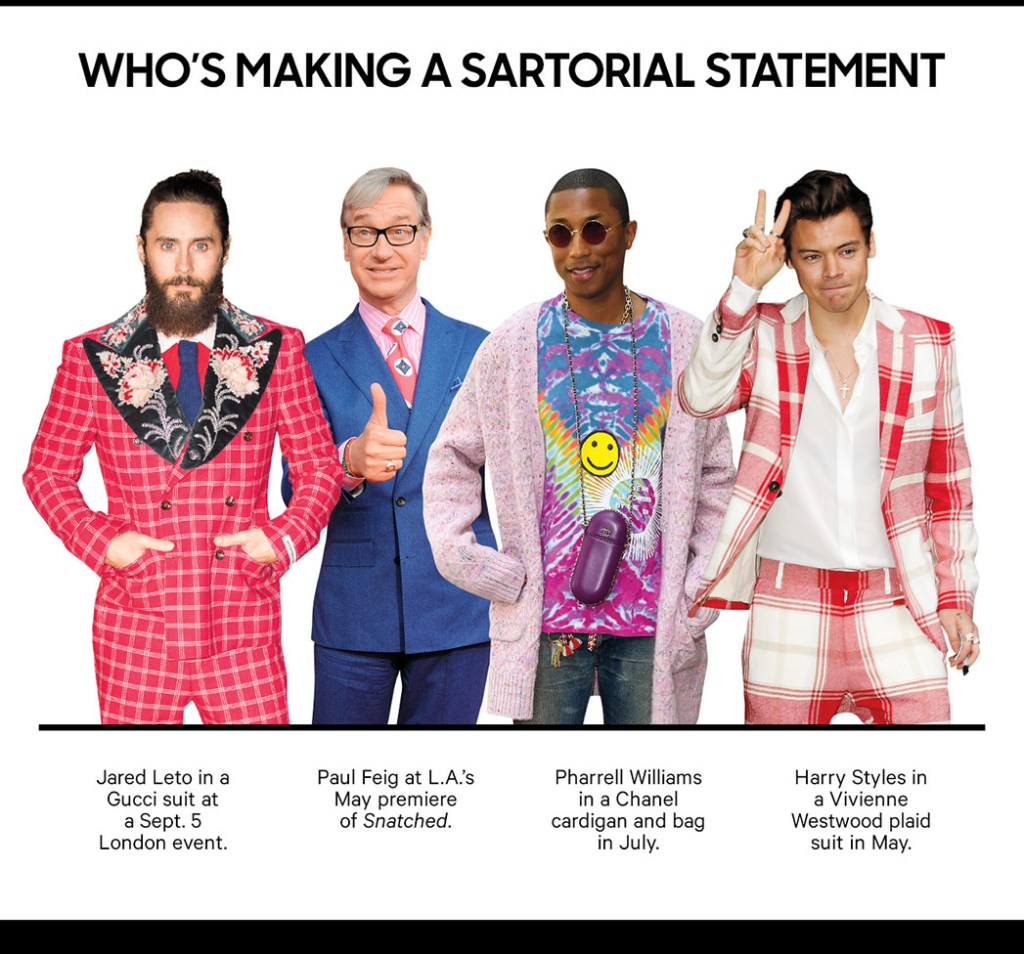