Continue to The Hollywood Reporter SKIP AD
You will be redirected back to your article in seconds
Skip to main content
November 15, 2019 6:00am

When Warner Bros. teamed with Coffee Bean and Tea Leaf this summer to turn two Los Angeles coffee shops into the Friends cafe Central Perk for the show’s 25th anniversary, the lines were out the door for 12 hours a day of the weeklong experience. Fans snapped selfies on the iconic orange couch and ordered “The Monica” mocha cold brew or “The Rachel” matcha latte. (For the monthlong Friends pop-up in New York City, the waitlist grew to 150,000 people.) And ahead of season three of Stranger Things in July, Netflix and Baskin-Robbins transformed a Burbank ice cream store into the show’s retro Scoops Ahoy eatery, where fans waited for three hours to enjoy a USS Butterscotch sundae. The shop sold more than 34,000 scoops of ice cream over 12 days.

Such pop-ups — which bring to life a beloved television show through a restaurant experience for mostly millennials and Gen Zers — have been deployed by a growing number of networks and studios to create buzz around such series as CBS TV Studios’ Beverly Hills, 90210, NBC’s Saved by the Bell, Amazon’s Fleabag, Sony’s Breaking Bad, Nickelodeon’s All That and Pop TV’s Schitt’s Creek. It turns out that capitalizing on generational preferences for Instagram-friendly experiences not only fuels anticipation, but also generates revenue and awards conversation. 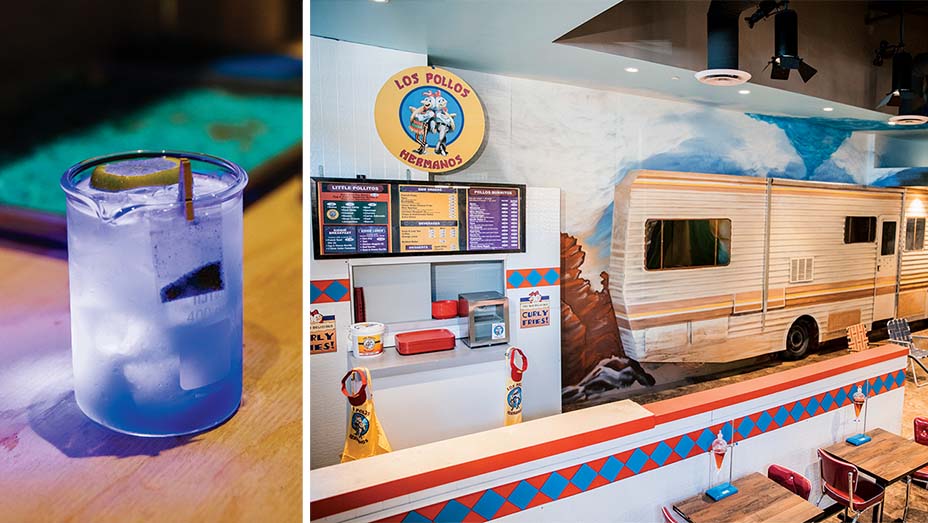 Derek Berry is the creator of pop-ups Saved by the Max (The Max was a cafe on Saved by the Bell), Good Burger (name of the All That experience, based on a comedy sketch) and Peach Pit (the hangout on 90210). Though Berry declines to provide any metrics, his company, also called Saved by the Max, likely hosted about 200,000 people (given a capacity of 356 people six days a week) over two years starting in 2016, first in Chicago then in L.A. At $40 per ticket, that would mean as much as $8 million in ticket sales. This summer, Good Burger hosted an estimated 15,000 fans over three months, which would net about $450,000 in sales with a $30 ticket price. And while the L.A. Friends and Stranger Things experiences were free, Sony Pictures Consumer Products teamed with Berry to create a Breaking Bad Experience, which opened Oct. 16 in West Hollywood with $30 tickets, covering entry, a drink and a food item (like the Heisenburger Sliders or Loaded SAULsa Nachos). Says Berry: “We’ve been sold out since opening night, and guests are staying longer [for] the interactive side of the food and beverage program.” 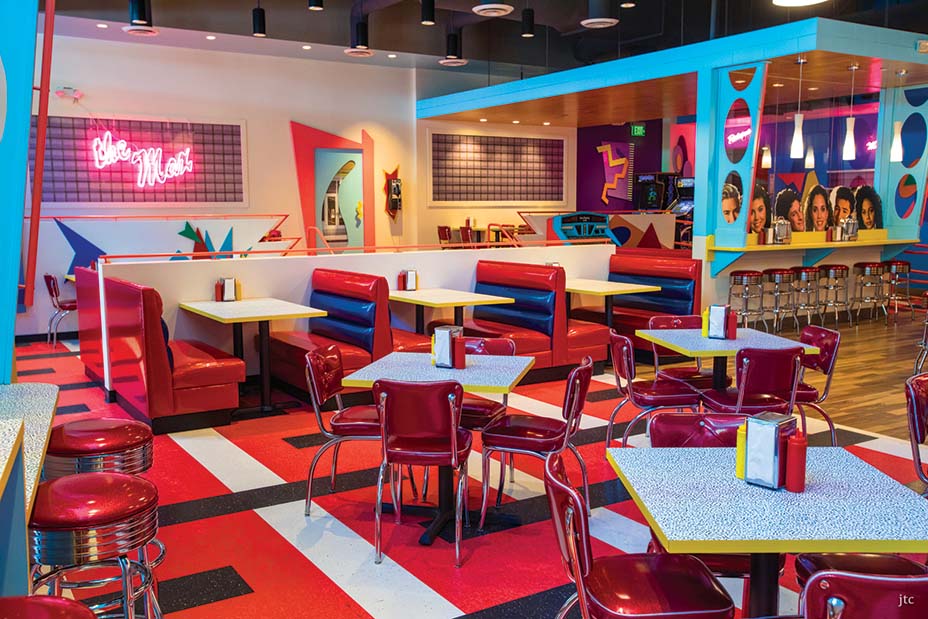 Berry, who outsources some of the pop-up execution to a builder and a chef (Eggslut’s Alvin Cailan for Good Burger, Michelin-starred Brian Fisher for Saved by the Max), is seeing a big uptick in interest. “In [recent] months, Nickelodeon, Fox and Sony reached out and said, ‘We have these really cool IPs. Would you be interested in [doing] a pop-up?’ ” Berry says. The event marketer pays an modest licensing fee to the network and later shares in the revenues. “We win or lose together if the concept is a dud,” Berry says. He retains an “open-ended partnership” with NBC to do more Saved by the Max pop-ups, which are heading to a yet-to-be-revealed city next year.

“The continued success of the show — both from a nostalgia perspective and from new audiences discovering it — is what has driven the demand for this pop-up experience,” says an NBCUniversal rep.

Short-term experiences can cost a network in the mid to high six figures, depending on the level of detail. The 12-day Scoops Ahoy pop-up began with a simple concept. Netflix was “interested in working with an ice cream brand to bring one of the flavors from the show to life,” says Dave Nagel, Baskin-Robbins senior director of consumer engagement. “We realized that it could be a much bigger opportunity for both brands.” The final installation featured a digital game — complete with 160 pages of story, thanks to a team of developers and scriptwriters — and a giant ice cream ship weighing 10,000 pounds as an Instagram op. 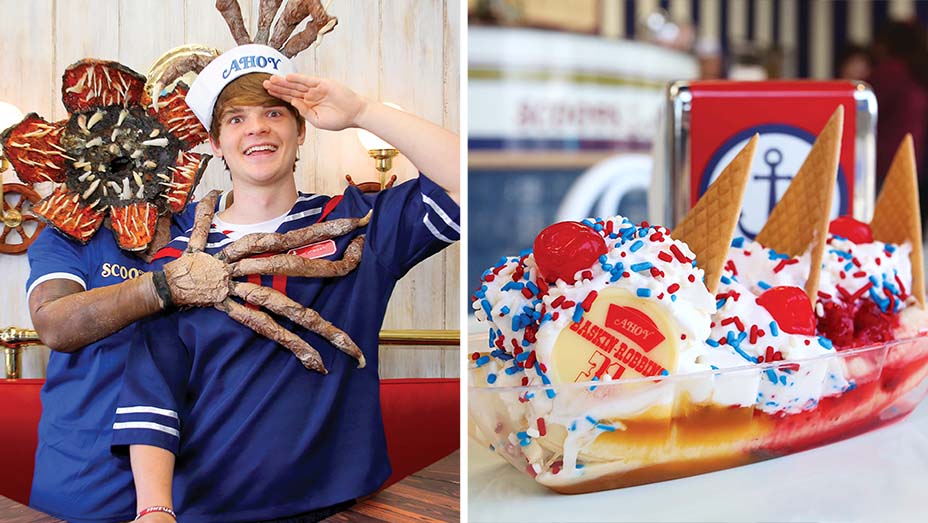 Nagel’s group ended up working closely with the Stranger Things creative team, including the Duffer brothers. “Obviously, the Stranger Things brand has a lot of equity, and that was appealing to Baskin-Robbins,” Nagel says. Netflix’s goal was “100 percent” about delivering an authentic experience for passionate fans, he says, “so there were not a lot of hard-and-fast business metrics or goals that you would normally have in a partnership.” (Netflix declined to comment.) Nagel says he didn’t pay licensing fees to the streamer, and despite the tight 36-hour remodel of the parlor, including removing all Baskin-Robbins logos, he claims it was profitable: “We had to shut down the drive-thru for safety because the lines were so long.” Along with a takeover in Toronto, the two Scoops Ahoys more than doubled sales and “this boost continued for both locations after returning to Baskin-Robbins branding,” says a brand rep. 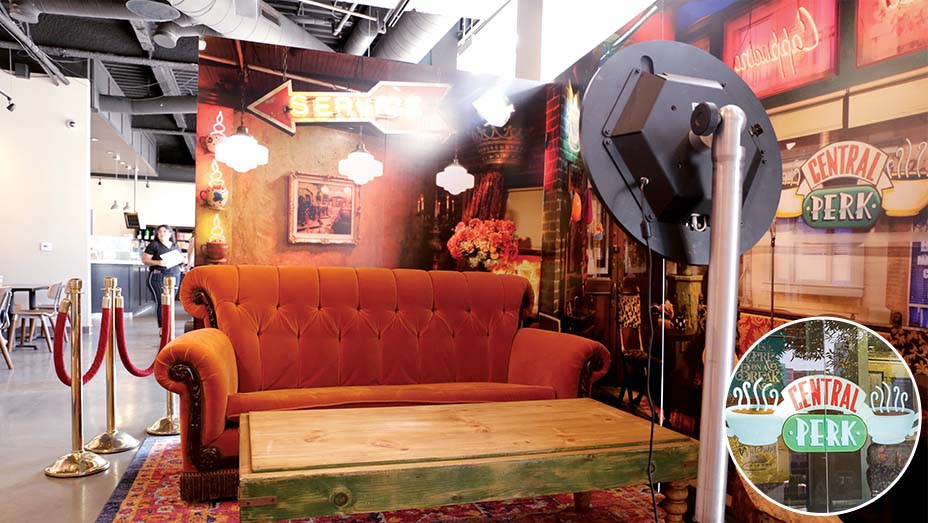 For the L.A. Friends pop-up Central Perk in August, Coffee Bean paid an undisclosed partnership fee to Warner Bros., which granted access to the show’s graphics. “Knowing that everyone loves Friends, it was like, ‘OK, we can get thousands of people’ — and it definitely surpassed what we were gauging,” says Ashley Keehne, head of strategic partnerships at Coffee Bean, which saw a “significant spike” in foot traffic that “contributed significant growth” to the entire company’s sales.

Peter van Roden, senior vp global themed entertainment at Warner Bros. Consumer Products who oversaw the Friends installations, explains that fans are into “the charm of the pop-up, where it’s sort of ‘I found it.'” The experience proves that young people do want to get up off of their couches in the digital age: “Actually, you’re in a heyday of people connecting and wanting to go out and do things,” says van Roden, adding that “this is an evolving space.”

Kristin Diehl, a professor of marketing at the USC Marshall School of Business, explains that pop-ups have the same draw for millennials and Gen Zers as wildly popular attractions like Star Wars: Galaxy’s Edge at Disneyland, where they can experience a world they’ve been to “in their mind” but not physically. “They don’t just want to watch a show, they want to be part of the story,” she says. “We know from research that taking on a first-person perspective intensifies emotions.” Diehl attributes the rise of pop-ups to the increase in content: “People are going all out, and we need to offer something new. It’s much more interesting than just dropping a trailer.”

The evidence bears this out. In less than three hours, the New York Friends experience sold out, accommodating 50,000 fans. At $29.50 per ticket, that’s as much as $1.5 million in sales; plus, 75,000 non-ticketed fans visited the merchandise shop. A partnership with live experiences company Superfly, the pop-up moves to Boston next, from Nov. 21 to Jan. 5, with special events on Thanksgiving and New Year’s, when ticket prices are upped to $55. “Most of the time we’re looking to break even. Sometimes it’s a pure marketing spend, like buying a billboard,” says van Roden. “Then the dream is, can they live on and sell tickets and become an ongoing vehicle?” 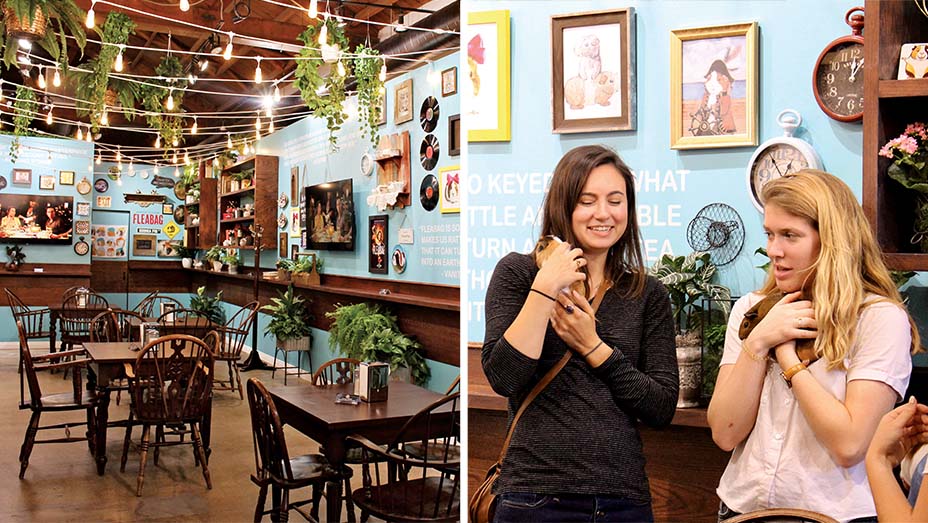 Some networks seem willing to forgo profits, investing in pop-ups with free entry in return for buzz that they hope will lead to ratings or awards. For a few days in August, Amazon hosted Hilary’s Cafe, inspired by the guinea pig-themed eatery in Fleabag that Phoebe Waller-Bridge’s character runs. It offered a free drink and snack, as well as guinea pigs for fans to pet. The streamer ran the concept by Waller-Bridge and Fleabag producers, who “loved the idea,” says Jennifer Verdick, head of promotions and consumer/trade events at Amazon Studios. Fans entered the Melrose Avenue spot on a first-come-first-served basis ahead of the Emmys, where the show netted six wins. “We chose L.A. to target both consumers and voters,” Verdick says. (Amazon is calling its next FYC screening series “Pop-Up Prime Video,” running Nov. 14 to 17 at H Club, with a sneak peek of Mrs. Maisel season three).

This fall, Pop TV is expecting 600 people per day for its free Schitt’s Creek experience at Hollywood’s Goya Studios from Nov. 22 to 24 and Dec. 13 to 15 in New York, with backdrops of the show’s Rosebud Motel and Rose Apothecary. “Our ROI is based on building awareness and support of Schitt’s Creek going into its sixth and final season,” say Pop TV reps Melissa Stone Mangham, senior vp marketing and brand strategy, and Caroline Wilson, vp integrated and partner marketing, in a joint statement.

The marketing is ramping up for the holidays — Netflix rang in the season with a charitable gift pop-up at The Grove on Nov. 13 ahead of the release of its first animated feature film Klaus (coinciding with events in Chicago and New York). Nickelodeon is opening a winter wonderland experience at Westfield Century City from Nov. 16 to Dec. 31, with nods to SpongeBob and the Teenage Mutant Ninja Turtles.

And as of October, Rixton Productions, the experiential event production company behind BrunchCon, was trying to work out a licensing deal with Paramount for a Meal Girls-themed restaurant called Fetch in 2020. “It’s a whole new business model,” says Berry. Pop-ups “resonate and [fans] go home and want to binge-watch — it’s beneficial for the studio, and if money can be made, that’s great, too.”