Glenn Close’s Golden Globes speech for The Wife brought the audience — and herself — to tears, as she spoke about her mother saying in her 80s, “I feel like I haven’t accomplished anything.” Her call to women to find personal fulfillment erupted in a standing ovation. “It was so totally spontaneous,” says Close, 71, laughing about her inspired moment. “It would never happen again.”

You’ve said that as soon as you read the script for The Wife, you immediately wanted to sign on and to attach your name to it. What made you say yes right away and stick with it until it was finally made after 14 years?

I wasn’t in the mix 14, now probably 15, years ago. I attached my name to the final five years. I’m not a producer. I’m just a hired hand. But when I read the script, when it was sent to me by my agent, I thought, “Well, you know, this is really interesting. And it’s not like any other role I’ve ever played.” So, I said, “Yeah, put my name on it and see if it can happen.” Like any independent film, you know. So, it did. I’m just floored by the kind of response the movie got and my performance has gotten — and now back to the movie again. I think a lot of people are going back and finding it and looking at it and realizing what a really good movie it is.

Sony has handled it brilliantly. I have a lot to thank them for.

What did you relate to the most about Joan, your character?

Like I said at the Golden Globes, I watched my mom, who was very supportive of my dad. Though she had great gifts, she sublimated herself to him. That’s what was expected. I had a lot to draw from, having observed a mom who never pushed herself forward, who was always very much the “help meat” of my dad. I pondered it a lot because she did say, to not just me but to others just before she died, “I feel like I haven’t accomplished anything.” You know, your first reaction, is, “Oh, but you were such a great mom and you were such a good wife.” But that’s not what she was talking about. I think she was talking about personal fulfillment. Now, Joan is different. The part where Joan is at the cocktail party and not introduced and helping him with his glasses and his pills and making sure there are no crumbs in his beard — that I could really relate to. But she also is complicit. She got to do what she should do in life, which is write, and she was in a position where she got people to read it. It’s a little bit more complex than my mother’s situation, but certainly I was informed by that. I’m basically a shy person. I’m introverted, so I don’t get attracted to crowds of people or even roomfuls of people. I could relate to that aspect of Joan as well.

Everyone teared up listening to your Golden Globes speech.

It was so totally spontaneous. It would never happen again. (Laughs.)

You spoke about just how important it was for women to find that sense of personal fulfillment and allow yourself to do that. Is that what acting provides for you?

Oh, definitely. I’m just as jazzed about my profession, my craft, now as I’ve ever been, and I’m very, very lucky that I find such fulfillment. Not just the acting part, but the collaboration is what I also find deeply fulfilling. The amazing people that I’ve worked with. Because we are definitely — it’s a collaborative art. No one does it alone, no matter what they say. (Laughs.) Yeah, I’m thrilled by it and challenged by it. I love it.

Speaking of collaboration, your daughter Annie plays the younger version of Joan in the film. Were you really excited to get to work on that together? How was that experience?

Oh, God, it was wonderful! And the thing that I was most proud of her for — two things. Number one, the kid of a famous person who wants to do the same thing never finds it easy, and it’s not their idea of the greatest job to be working with their mother. (Laughs.) So, the first thing I’m proud of about Annie is that she won that role herself. It wasn’t a token thing. Because when Bjorn [Runge], our director, realized that Annie was an actor, we both realized — he said, “She has to be right for it.” And I said, “Absolutely.” That’s all. She auditioned and re-auditioned and auditioned and she got the part. I do think hers is a beautiful performance. Then she had to decide whether she wanted to be in a movie with me, and I think she realized what a great chance it was and she leaped at it. I have big respect for her for that, too, because I know how hard it is.

How did you interpret the closing scene of The Wife, where Joan sits on the plane looking down at a blank page and then looks up? That she’d write her own story? As a reference to Jonathan Pryce’s character saying that without her, he’d just be staring at a blank page in stupefaction?

(Sighs.) That is hard to describe in words. First of all, it’s the first time she’s been presented with a blank page without him looking over her shoulder. So she has a new freedom. I think the expectation is the strongest feeling at that moment. The joy. I know she will continue writing. I think her writing is her. I think she will tell her children everything and then together, they’ll figure out what they need to do about it. To me, it was expectation and a sense of freedom.

How was it starring in Mother of the Maid in New York while promoting The Wife this fall?

Pretty exhausting. That was a very rigorous play, also written by Jane Anderson [screenwriter of The Wife]. I was onstage for a solid two hours, 15 minutes, and that kind of emotional journey takes your muscles and sinew and — it’s just as exhausting as if I had climbed a mountain. But there was a great sense that we had delivered an experience that I think audiences won’t forget. 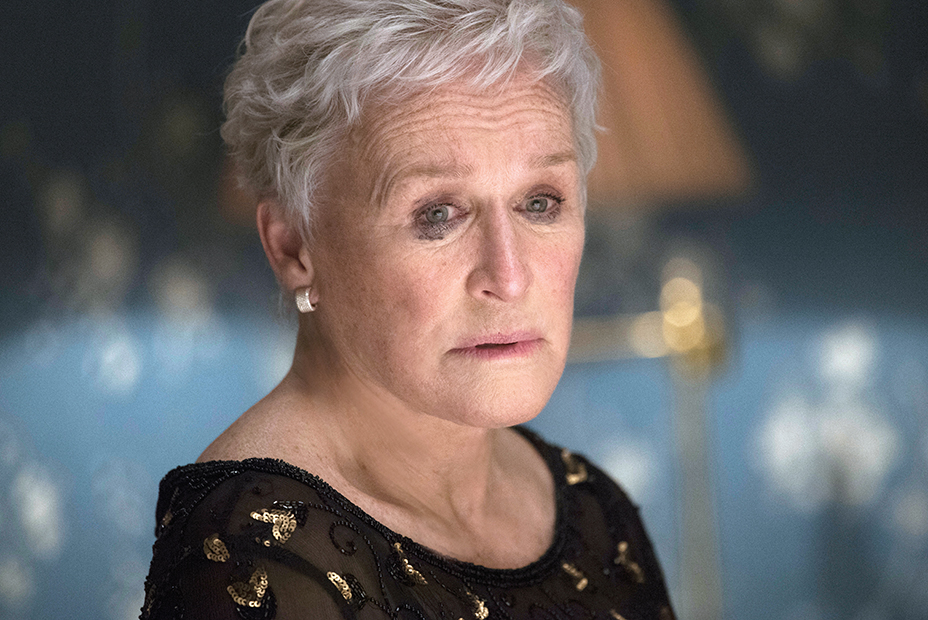 You seem to have formed a connection with Lady Gaga this awards season. Would you consider working on something together?

We haven’t talked about working together, but I would certainly be open to that. She’s remarkable, incredibly courageous and creative. A prodigy. So many gifts. I met Cynthia, her mother, before I met Stefani, as I call her. I remember when she first sat down at the [THR] Roundtable and she was next to me, I could really sense her nervousness. I tried to put myself in her shoes. Even though she’s accomplished incredible things, as a personality, performer, artist, writer, she’d never been in that particular combination of women before, who are actresses. I tried to put her at ease as much as I could. I was just thrilled that she was there. She’s very articulate and smart. I felt like that was almost a rite of passage for her around that table. I’m very proud of her.

Have you seen her in Vegas yet?

It’s not your first time going, but what are you most excited about for the Oscars?

Just to be in that room. It’s pretty special. I have felt such love from people. I don’t take it for granted. I feel that people are seeing me almost for the first time. It’s a strange feeling. Like maybe I’ve come into my own in a weird way, even though I’m 71 years old. (Laughs.) I guess it’s better late than never, right?

Were there any performances or films from the past year that blew you away?

I saw Melissa [McCarthy]’s performance [in Can You Ever Forgive Me?], and I absolutely loved it. I’m a great believer that anybody who’s a comic genius is going to be a great dramatic actor. I think that’s the rule, more often than not. I mean, Marty Short did extraordinary work in that season of Damages. It’s so thrilling to me to see somebody like Melissa going into this new territory and being so bold about it. That’s really cool. And Olivia Colman [in The Favourite], that was a great performance! Paddy Considine was in a movie with me called The Girl With All the Gifts. And during that time, I watched Tyrannosaur, which is the movie he wrote and directed that Olivia’s in. I remember Paddy saying to me, “She’s a great actress.” She was very much on my mind because she was extraordinary in that film and I loved her in The Night Manager.  I feel like Hollywood has discovered her. (Laughs.) She’s gonna have a great blossoming of her career after this.

You starred in Sunset Boulevard on Broadway. How is the film’s development coming along?

I’m sitting down with the writer and the director this week. Nothing’s been announced, but we’re moving along.