Classic rockers are all the rage on movie screens. This year has already included fantasy-imbued biopics and sci-fi stories imagining a band’s entire catalog being erased from the collective memory.

This week’s Blinded By The Light takes a slightly different approach. The story focuses on Javed (Viveik Kalra), the teenage son of Pakistani immigrants living outside London in 1987. His love of poetry doesn’t go over well with his family, who want him to get a real job, while he also feels out of touch with many of his friends.

One day he’s given a cassette copy of Bruce Springsteen’s album Born to Run. In the lyrics about working class people and the hardships they deal with, Javed finally finds something he can relate to. Not only is he lifted out of his doldrums by the thundering music of the E Street Band, but he finds the inspiration to continue writing his own poetry and pursuing his dream.

The marketing for the movie — named after an early Springsteen song — has taken full advantage of The Boss’s position as the story’s inciting incident to create a campaign celebrating the freedom of inspiration. 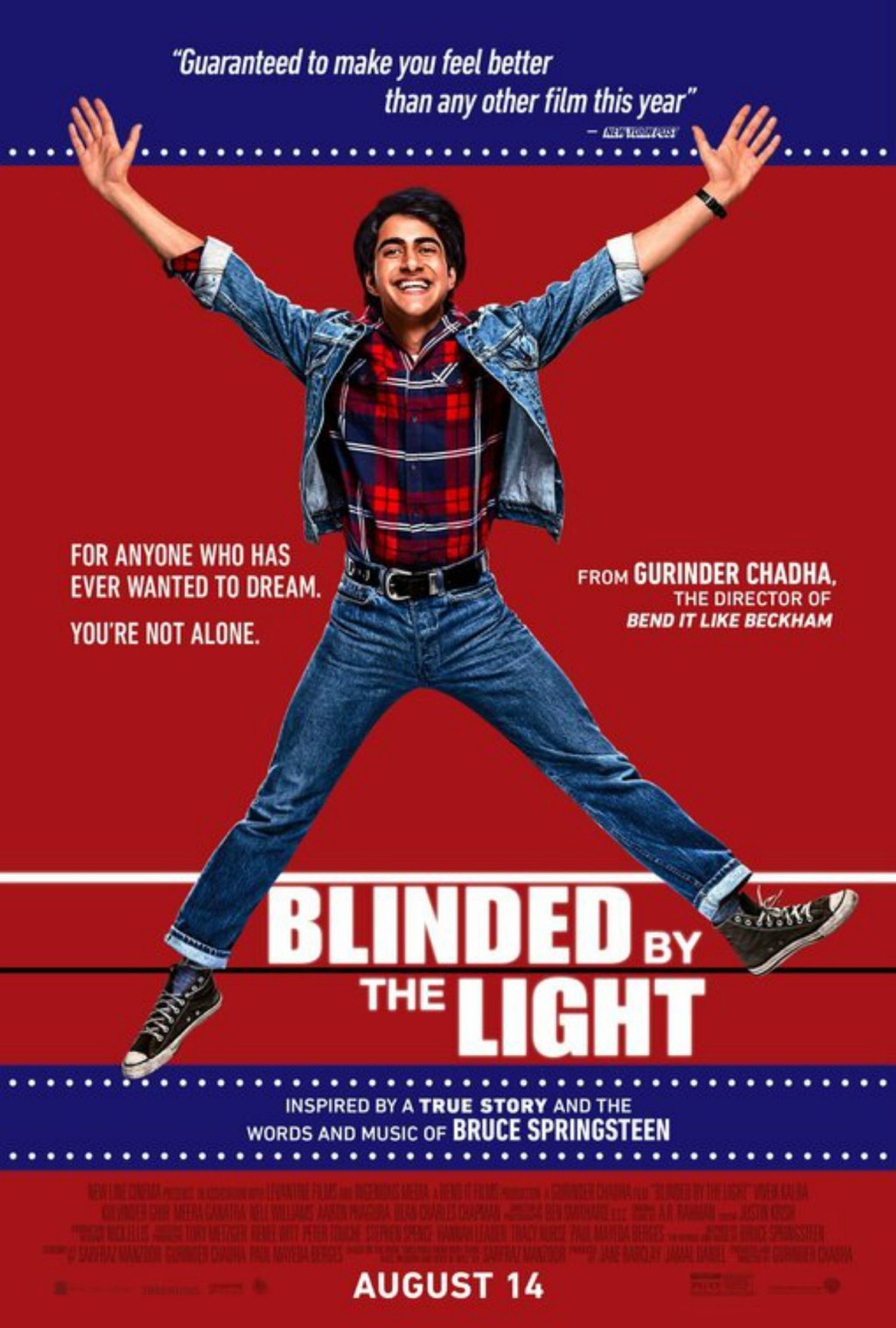 Javed rocks a very 1980s look with a denim jacket on the first poster (from marketing agency BOND), released in early June. He’s jumping for joy and the sense of upbeat enthusiasm permeates the poster, reinforced by the positive pull quotes from early reviews shown at the top. Of course it makes note of the story being inspired by Springsteen’s music.

The first trailer (5.5 million views on YouTube) from early May opens by introducing us to Javed and showing us his life, including his overbearing parents and how awkward he is in his social life. He’s skeptical when a friend slips him a couple Springsteen albums, but soon comes around when he discovers how universal the singer’s lyrics and stories are. The music gives him the confidence he needs to seize what he wants and embrace who he is, including sharing the poems he’s written. There are still problems to overcome within his family, and some of his friends think he’s crazy, but simply by feeling he’s not alone has changed how Javed views the world and those around him. 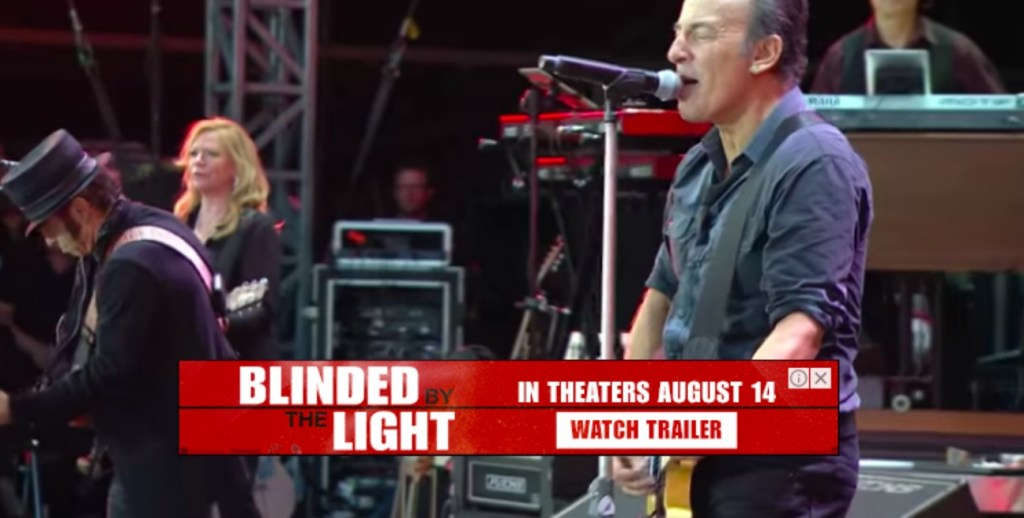 New Line moved quickly to pick up distribution rights for $15 million while the movie was still at Sundance earlier this year, after a screening that garnered a good amount of positive buzz. Springsteen being in attendance along with the cast and crew didn’t hurt, of course. Ultimately it wound up being one of the biggest deals to come out of the event.

The film’s appearance during WB’s CinemaCon presentation in April kept the positive momentum going, as well as revealing the end credits would feature an unreleased Springsteen song originally composed for a Harry Potter film years ago.

Viewers that have watched Bruce Springsteen videos on YouTube in the last month may have seen pre-roll videos and banner ads for the film, a targeting decision that makes sense.

The movie was one of those included in AMC’s recently unveiled Artisan Films venture, with the trailer — at least when it’s shown on AMC screens — included in the logo for that program. Director Gurinder Chadha appeared in a special video for Artisan Films.

In early July, the movie’s soundtrack listing was revealed, showing the album was filled with Springsteen classics along with some previously unreleased songs, virtually guaranteeing it will be sought after by fans. Springsteen later released an audio-only YouTube video of him performing “The Promised Land,” one of the songs on that soundtrack. Earlier this week he released the audio for “I’ll Stand By You,” also off the movie’s soundtrack.

Asbury Park, NJ hosted the movie’s premiere last week, with Springsteen joining the cast and crew on the red carpet and later performing at the afterparty. Also in attendance was Sarfraz Manzoor, on whose memoir the movie is based. Manzoor had previously been part of the press tour for the film along with other aspects of the campaign, often along with Chadha.

At about the same time Warner Bros. hosted a screening of the movie in New York for Twitter employees, specifically those of Asian descent.

A featurette released at the end of July followed Manzoor’s journey from writing the book to seeing the movie produced and more, including how he and Chadha kind of stumbled in to getting Springsteen’s permission to move forward. 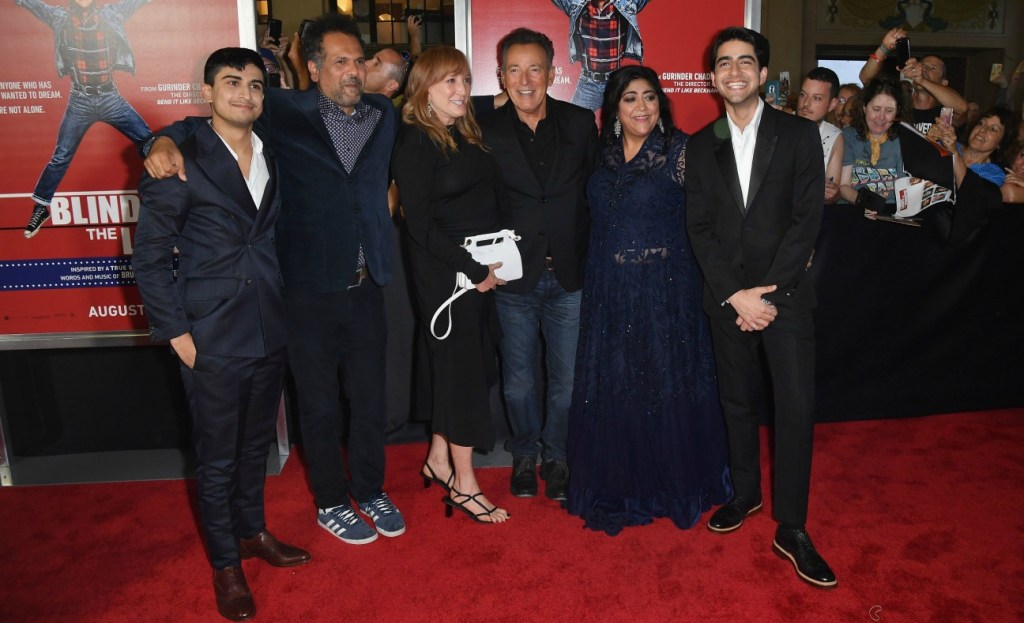 Like many recent movies centered around classic rockers, this one arrives in theaters with the endorsement of the subject himself. Instead of being an authorized biopic, what’s sold through the campaign is a more personal story of how the world can change when you find music that connects with you on a personal level.

Springsteen hasn’t taken as active a role in the campaign as Elton John did for Rocketman or the members of Queen for Bohemian Rhapsody, popping up only at key moments. But his presence looms over everything, thanks to the generous use of his music and the all around love for him shown in featurettes and elsewhere. Instead the campaign has frequently put both Manzoor and Chadha in the spotlight.

That’s allowed the marketing to create what might be the most interestingly inclusive movie campaign of the year. What’s being sold is a story about the child of Pakistani descendants living in Great Britain who is inspired by a white American rock star, all told in a movie directed by a British-Indian woman.