One day after making an appearance on Megyn Kelly Today, the Today hour serving as Kelly’s debut on the NBC morning show, Will & Grace star Debra Messing is speaking out against the former Fox News host.

Taking to her personal Instagram page, Messing on Tuesday posted a photo of cucumbers from the Today Show green room with the caption #PressTour. Shortly after her appearance on the show, the actress responded to a comment asking her why she had appeared on “the Megyn Kelly show” and calling it a “fail,” Messing responded, “honestly I didn’t know it was MK until that morning. The itinerary just said Today Show appearance. Regret going on. Dismayed by her comments.” 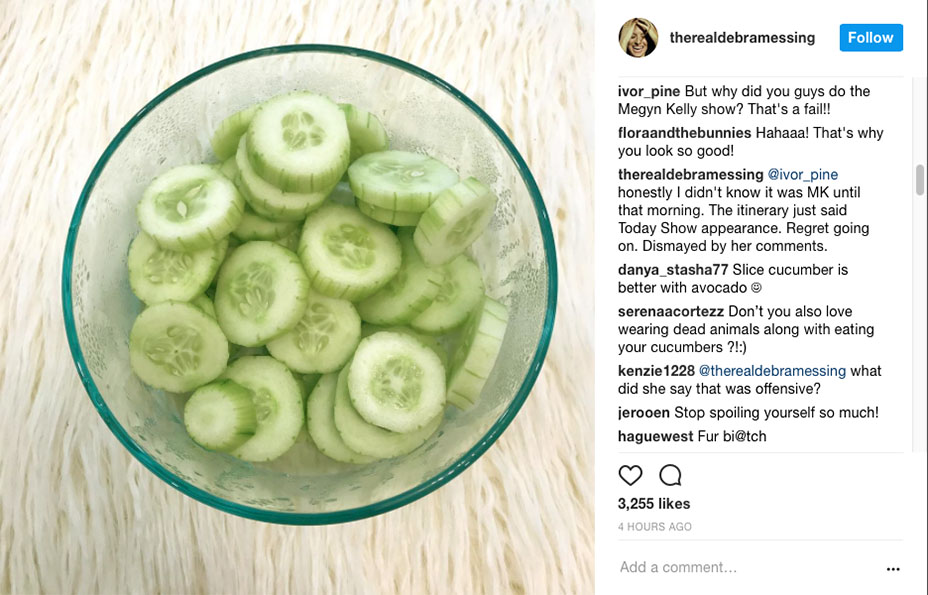 The comments in question came when Kelly invited a Will & Grace “superfan” onstage for a Q&A. When introducing the fan, she asked, “Is it true you became a lawyer, and you became gay, because of Will?” Kelly appeared to be joking and received laughs from the audience and cast.

“I look at Will Truman and I’m like, he has it made: lawyer, apartment in New York City and gay? Come on,” the fan responded.

Directly thereafter, Kelly awarded the fan with two tickets to a taping of the series in Los Angeles, eliciting further applause.

“I don’t know about the lawyer thing, but the Will & Grace thing and the gay thing is going to work out,” Kelly said, wrapping up the segment. The comment earned a laugh from series co-star Eric McCormack, but Messing is seen clearly in the frame, not smiling.

Earlier in the segment, Kelly spoke to the sitcom’s cultural impact and lasting legacy for the gay community. “Culturally, it had a huge impact,” she said. “Vice President Joe Biden said at the time, that he thinks no other program has had as much of an effect, in sort of, calling people’s attentions to gay rights.

“What does it feel like to hear that?” she asked Will and Grace co-creator David Kohan.

“Shocking,” answered Kohan. “I mean, he read it exactly as I wrote it. (Laughs.) It was incredibly surprising and incredibly gratifying. We never set out — there was nothing — we were not an ideological thing. We were not set out to posit ideas into the zeitgeist. We were just doing a show about four characters and trying to be funny. It was very, very satisfying.”

Immediately following the appearance, star Sean Hayes tweeted a picture of the cast smiling with Kelly onstage with the caption, “Having fun on the premiere episode of @megyntoday.” Messing retweeted Hayes’ photo.

A request for comment from Messing was not immediately returned.

Watch the video below.