“When someone sneezes in your vicinity, you’re going to look around. When you go to purchase your food and beverage, you’re going to see how they’re served. When you walk the arenas and the stadiums, you’re going to look at how they sanitized it and who’s out there to continue to sanitize it,” says Lee Zeidman, president of Staples Center, Microsoft Theater and L.A. Live. “I do not believe we’re ever going to be back at whatever normal was on March 11 — regardless of what kind of vaccine, drug therapy or physical distancing.”

Zeidman has operated Staples Center, the iconic arena that is home to the NBA’s Los Angeles Lakers and NHL’s Kings, for more than 20 years, but seven months into the novel coronavirus pandemic, he doesn’t think he ever will experience it the same way again.

The year 2020 has upended the world of live entertainment venues, wiping out the majority of concerts, sporting events, theater, dance and opera. Staples Center and Microsoft Theater have canceled a combined 200 events — which amounts to a potential loss of more than 3 million admission-paying fans.

Though fans have returned to a handful of NFL stadiums — including TIAA Bank Field in Jacksonville, FirstEnergy Stadium in Cleveland, Lucas Oil Stadium in Indianapolis and Empower Field in Denver — the majority of teams are still playing to empty stands, as with MLB games; meanwhile, the NBA and NHL constructed quarantined bubbles in designated venues for playoff games, leaving their home stadiums entirely event-free.

“The opening that was scheduled, with a series of concerts and sporting events, quickly was transitioned into what ended up being a virtual ribbon-cutting ceremony with just a small number of people,” says SoFi managing director Jason Gannon. It was followed by the fanless Rams home opener Sept. 13, in an arena that can house 100,000 people.

Taylor Swift originally was set to open the stadium with her Lover Fest on July 25 and 26, followed by performances by Kenny Chesney, Guns N’ Roses and Tim McGraw. Gannon says there are plans to host a proper grand opening when it’s safe to do so but that likely will not be until the Rams and Chargers already have completed their first seasons in their mostly empty state-of-the-art multipurpose arena.

While sports have been able to carry on in an altered capacity, live music has been almost entirely sidelined. Aside from the emotional disconnect of virtual performances, Zeidman says concerts — and, by extension, their venues — are at a disadvantage because of the way they are financed.

“Sports can survive, to a certain extent, in a ‘bubble environment’; because of all the broadcast money, they keep themselves afloat,” he says. “Concerts don’t have that luxury of having broadcast money or as big of sponsorship money as sports does,” which means the financial hurdles are greater. On top of that are the sheer logistics of scheduling a tour at a time when most artists have pushed their 2020 shows to summer 2021 and are competing for dates not only with one another but also against altered (and, in some cases, still unknown) playing schedules for the NBA, WNBA and NHL.

The lack of confirmed bookings “wreaks [scheduling] havoc on a building like Staples Center,” Zeidman says. Furthering the logistical nightmare is the lack of uniformity in coronavirus protocols across state lines. As evidenced by the NFL, some states and counties have allowed partial-capacity fan events at this time, while others, like New York and California, have not. As the pandemic continues to evolve over the coming months, these restrictions will surely continue to change, which poses difficulties for musicians planning cross-country shows. 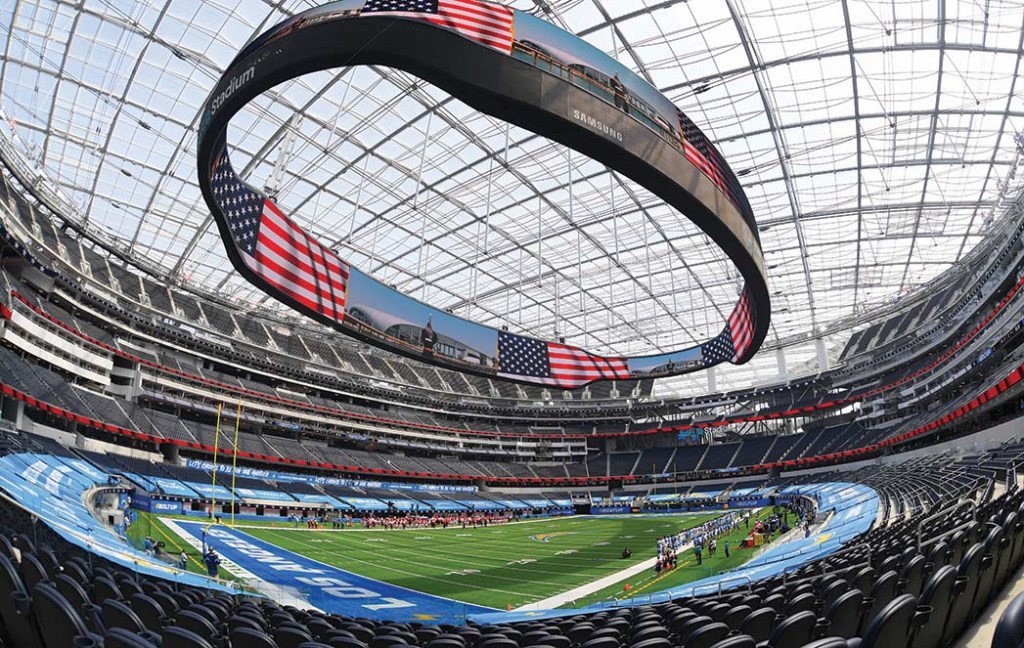 Notes Zeidman: “If you’re a promoter or an agent or an artist, the toughest thing is plotting the tour. If you’re going to go from New York to Los Angeles, [there could be] 100, 150 dates in between there — without knowing exactly where every state is, where every county is and where every city is, as it relates to how you can open up for mass gatherings in full capacity. It’s going to be very tough to do that. Then, as you try to take your tours overseas, you’re going to run up against the same issues country to country.”

With so much in limbo, venues increasingly are relying on events and strategies outside of sports seasons and concert tours to fill their spaces and bring in revenue.

Staples Center recently hosted the mainly virtual Emmys, is in talks for how to pull off the Grammys (Jan. 31) and is hosting a fanless exhibition boxing match Nov. 28 between Mike Tyson and Roy Jones Jr. and featuring a half dozen musical performances. Microsoft Theater has hosted five televised boxing matches and is in negotiations to host the American Music Awards on Nov. 22. SoFi Stadium, which is part of the new Hollywood Park that includes American Airlines Plaza and a smaller performance venue, is looking at ways to host farmers markets, small shows and community events.

Staples Center and the Forum, as well as Madison Square Garden and Brooklyn’s Barclays Center, also will serve as polling sites for the general election.

Elsewhere, in Manhattan, Lincoln Center — the longtime home to the New York Film Festival, which went mostly virtual this year — has had to cancel hundreds of events and has weathered the shutdown with virtual children’s shows, memorial concerts for those lost to COVID-19, and Love From Lincoln Center, a collaboration with the New York Philharmonic to perform for health care workers at hospitals. It also has forced the venue to be “much more in the present,” says Jordana Leigh, director of the Lincoln Center’s David Rubenstein Atrium. “[Before,] we’d think so long term, like seasons ahead of us,” and the mindset change also has brought about new ideas for how to connect with audiences even after the pandemic ends.

“There is a shift thinking about the virtual world and virtual performances, and virtual engagement will continue even when we can open our doors,” says Leigh. And preparation already is underway for when those doors do open, she adds, with “a whole SWAT team of people figuring out how to make this a safe space for guests,” from the stage to the seats to the bathrooms.

Likewise, SoFi has added plexiglass dividers around the stadium, and Staples Center is planning to go contact-free by moving to smartphone-only tickets, cashless businesses, button- and handle-free doors, and contactless faucets and soap dispensers.

And though Staples Center has had less than 20 percent of ticket holders request refunds from this year’s shows, now the question remains — will guests return when the venues are open for them?

“We could be in a position where people may have been out of work for anywhere from six to 18 months — somebody in the restaurant business who hasn’t worked in 12 months may not have that discretionary income to go to two, three, four events a year anymore,” says Zeidman. “And people may have grown accustomed to watching sporting events at home and doing what they wanted to do versus coming to an arena.”

Justifying the cost of attending big-ticket sporting events and concerts in person may be tougher for many Americans, and it’s looking unlikely they’ll be lured back with discounted admission. With the growing number of pricey sanitizing and safety precautions and the uncertainty of whether sports leagues, promoters or the venues themselves will foot the cleaning bill — fans could possibly see a hike in ticket prices to cover those costs.

“Once we get into potentially hosting reduced capacities, we’re going to have to work with the promoters, with the leagues and the teams to see if this works for them,” says Zeidman. When venues can open and at what capacity is up to the government, but there’s still plenty to be worked out. He adds, “Who is going to pick up all these extra charges? Because there are going to be extra charges as it relates to what you’re going to do from a guest services standpoint, from a security standpoint, from a food and beverage standpoint, from getting your venue ready to potentially be as touchless and as contactless as possible — there’s costs associated with all of those.”

When, how and who’s paying aside, SoFi is ready for its moment, especially after Issa Rae and the Insecure cast used the stadium for their own private Emmy-watching party.

Says Gannon, “We are just so excited for the moment to come where we’re able to safely share this in person with more and more Angelenos.”