On Dec. 1, NBC News president Noah Oppenheim gathered shellshocked staffers for an afternoon Nightly News meeting. It was two days after the network abruptly fired Matt Lauer, its biggest star and the linchpin of its $500 million-a-year Today franchise, amid allegations of sexual misconduct. According to those present, Oppenheim opened the meeting by thanking the staff for their “exemplary work… under this tough cloud.” While noting that he knew as much about Lauer’s behavior as “anyone who has walked into a supermarket in the last 20 years,” he did admit that the failure to see what was seemingly right in front of them is a legitimate question.

“There has been a lot of swirl and noise surrounding a really good and important question,” he said. “Which is, how the hell did this happen? How did this horrific behavior go on without it being brought to light and dealt with?”

And he warned that anyone in NBC News management who covered for Lauer would face “severe” consequences. One female NBC News staffer says the missive was poorly received, noting that it was “management that failed” employees. (Former NBC News execs including Jeff Zucker and Steve Capus also denied knowledge of what Zucker characterized as Lauer’s “deviant predatory behavior,” and NBC News chairman Andrew Lack, Oppenheim’s boss, issued a companywide memo vowing to “learn as much as we can about the circumstances around Matt Lauer’s appalling behavior.”)

The ousters of Lauer, 59, and Charlie Rose, 75, from CBS This Morning a week earlier, have deep business implications for both networks and for the ongoing reckoning over sexual harassment in entertainment and media. Today remains the top-rated morning news program in the coveted 25-to-54 demo, and CBS This Morning has given the network its biggest morning audience in more than 20 years. But now all bets are off, say observers. Lauer “was here one day and gone the next, and now we’re just trying to pick up the pieces,” says a veteran NBC executive. “It’s like a death in the family. You can’t help but feel that way. It’s like a death.”

As questions swirl about what NBC executives actually knew and when, some are beginning to voice concern about the manner in which allegations are reported and dealt with by companies desperate to sever ties with anyone tainted. Multiple sources close to Lauer, while careful not to excuse his reported behavior with junior colleagues, say he thought the encounters were consensual, though the power imbalance between a $20 million-a-year star anchor and junior producers and bookers is certainly glaring. And a few NBC News insiders have expressed discomfort with some of the reporting about Lauer. (Worth noting: The same debate is not taking place at CBS News with regard to Rose.) More than one NBC insider has questioned reports saying Lauer had a button under his desk at 30 Rock that locked the door, a detail upon which many outlets have fixated. (Such buttons are common, but they open and close the door, not lock it, say NBC sources.)

NBC's Next Headache? New Olympics Host Mike Tirico Has Harassment in His Past

NBC News executives were tipped off that media outlets were calling Today employees past and present about Lauer. In the weeks before the Thanksgiving holiday — and before The Washington Post‘s detailed Nov. 20 report about Rose’s behavior — executives including Lack and Oppenheim questioned Lauer more than once. He is said to have told them that he was “racking his brain” to recall any incidents but could not. They also questioned those who worked closely with him on Today, says a source. Nineteen of the 32 senior-level producers at Today are women. NBC News execs also combed through Lauer’s personnel file and NBC legal files.

The Dec. 1 “action by the company still doesn’t address who knew what, when they knew it and why they didn’t do anything about it,” posits another network source. Making matters worse, Lauer’s ouster comes in the wake of the controversy surrounding Ronan Farrow’s Harvey Weinstein reporting, which he began at NBC News but took to The New Yorker. And NBC’s handling of the infamous Access Hollywood tape also is again in the news, thanks to Donald Trump’s reported assertions that the tape may be fake. Billy Bush, who was terminated from NBC News for his role in the 2005 recording, told Stephen Colbert on Dec. 4 that NBC News management has acknowledged privately that they “moved a little quickly” to fire Bush.

The implosion of powerful men also is causing many to re-examine retro notions about the anchor configuration of morning TV. At both networks, it fell to female co-hosts — Gayle King and Norah O’Donnell on CBS, and Savannah Guthrie and Hoda Kotb on NBC — to explain the fate of their colleague to viewers. Guthrie — who had just learned about Lauer around 4 a.m. — choked back tears as she delivered the news. “I have felt for years that women can carry these programs,” says a longtime TV news executive. “But I’m sure there are plenty who think they can’t. It’s still an industry that is dominated at the top by men.” 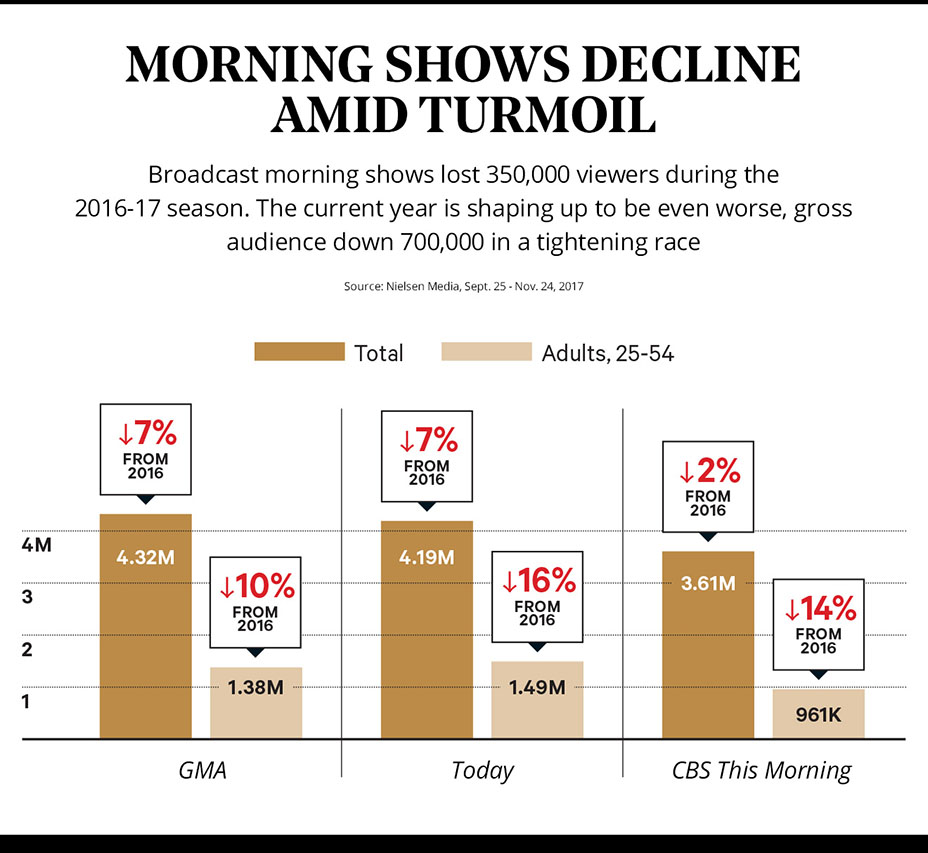 Neither network had a succession plan in place: Lauer was signed through 2018. But Rose has had health setbacks before and underwent major heart surgery in February. “It forced an issue that everyone has been aware of for a long time: Who is going to replace Charlie?” says a CBS executive. “It’s not going to be an alpha male because you have two alpha females [in King and O’Donnell], you need someone to complement them.” Adds an NBC News insider: “They honestly don’t know what they’re going to do. They’re very much still trying to figure this out.”

Sources say King and O’Donnell advocated to CBS management to host This Morning without a third fill-in anchor the day after the Rose news broke. One CBS News source says there was some discussion about bringing Vladimir Duthiers in at 7:30 a.m., after O’Donnell and King delivered the report on Rose, but the idea was quickly nixed. Neither program is expected to name a replacement soon, perhaps not until the new year. Meanwhile, Bianna Golodryga has been co-anchoring with King and O’Donnell during the week of Dec. 4, with Face the Nation host John Dickerson set for the week of Dec. 11. Kotb has been co-anchoring with Guthrie for the week of Dec. 4.

“I think this is an opportunity to think a little bit differently,” says Soledad O’Brien, a former anchor of Today‘s weekend edition and CNN. “There’s this mythology that it has to be a boy-girl team, and the boy should be about 15 years older than the woman.”