To chill or not? Netflix investors are debating the global streamer’s outlook more than ever after it lowered its subscriber growth forecast for 2019 on Oct. 16, ahead of November’s launch of video streaming competitors from Disney and Apple.

At the same time, the company returned to U.S. subscriber growth in its third quarter ended in September after losing U.S. users in the second quarter. One key question for investors and Wall Street is now when Netflix can get to a point where it can self-fund its spending — including a projected record $15 billion budget for content this year — which is set to exceed the company’s cash generation by $3.5 billion, an all-time high for the firm led by CEO Reed Hastings.

Netflix has so far relied on debt to fund this so-called negative free cash flow amid its content spending spree, ending September with $12.4 billion in long-term obligations and on Oct. 22 selling another $2.2 billion in bonds.

In its third-quarter earnings letter to shareholders, the company also said it would continue raising financing via debt in the near future. “Our plan is to continue to use the [debt] market in the interim to finance our investment needs,” it said.

Management highlighted though that it expects to “slowly” narrow its free cash flow gap starting in 2020, without detailing when it hopes to turn free cash flow positive. “With our quickly growing [subscriber and] revenue base and expanding operating margins, we will be able to fund more of our content spending internally,” it said in its letter. “As a result, we’re expecting free cash flow to improve in 2020 versus 2019, and we expect to continue to improve annually beyond 2020.”

So when will the streaming giant manage to close its cash gap? Analysts surveyed by The Hollywood Reporter forecast the firm will do so between 2021 and 2024. Cowen analyst John Blackledge predicts the company will turn free cash flow positive, to the tune of $305 million, in 2021. Moody’s Neil Begley forecasts Netflix will reach 200 million subs, led by growth overseas, by 2021 and reach the free cash flow break-even point by 2023.

Blackledge said the company’s multi-year move from licensing third-party programming to more original content will allow it to turn free cash flow positive as content spending growth slows in the coming years and the firm can spread its content costs over a bigger user base. In a report, he also noted that management’s 2019 guidance “implies a roughly 1.6 time cash content spend to profit and loss content amortization ratio, in line with ’18.” He expects “this ratio to moderate” in the coming years.

And more popular originals will also allow the company to further boost its subscription price despite cheaper rivals, argues Guggenheim Securities analyst Michael Morris. Netflix “will continue to monetize its user base through creating award-winning content at a justifiable, gradually higher, price over time,” he predicts. He projects that Netflix will reduce its cash shortfall to $1.88 billion in 2021 before turning slightly free cash flow positive in 2022 with $300 million before a big free cash flow jump in 2023 to $2.92 billion.

Pivotal Research Group analyst Jeff Wlodarczak, who had forecast accelerating free cash flow losses through 2022, after Netflix’s latest earnings update tweaked his free cash flow loss estimates “lower materially” and boosted his stock price target by $50 to $400. “Netflix has a massive head start on potential competitors, has created substantial barriers to entry and ultimately we think they win the global OTT race and generate material profitability,” he wrote in a report. “Ultimately this will be a two-horse race – Netflix and Disney – where both horses can win.”

But not everyone on Wall Street is convinced that Netflix can stop bleeding cash. Fitch analyst Patrice Cucinello asked in a report “if the company can indeed reach a point where it can fund required content investments with internally generated cash.”

And Wedbush Securities analyst Michael Pachter, one of the biggest Netflix bears on the Street, warns that despite price increases in recent years, “cash burn continues to grow.” He adds: “We expect the company to continue to increase its marketing and content spending over the next several years in order to maintain the pace of its subscriber growth.” 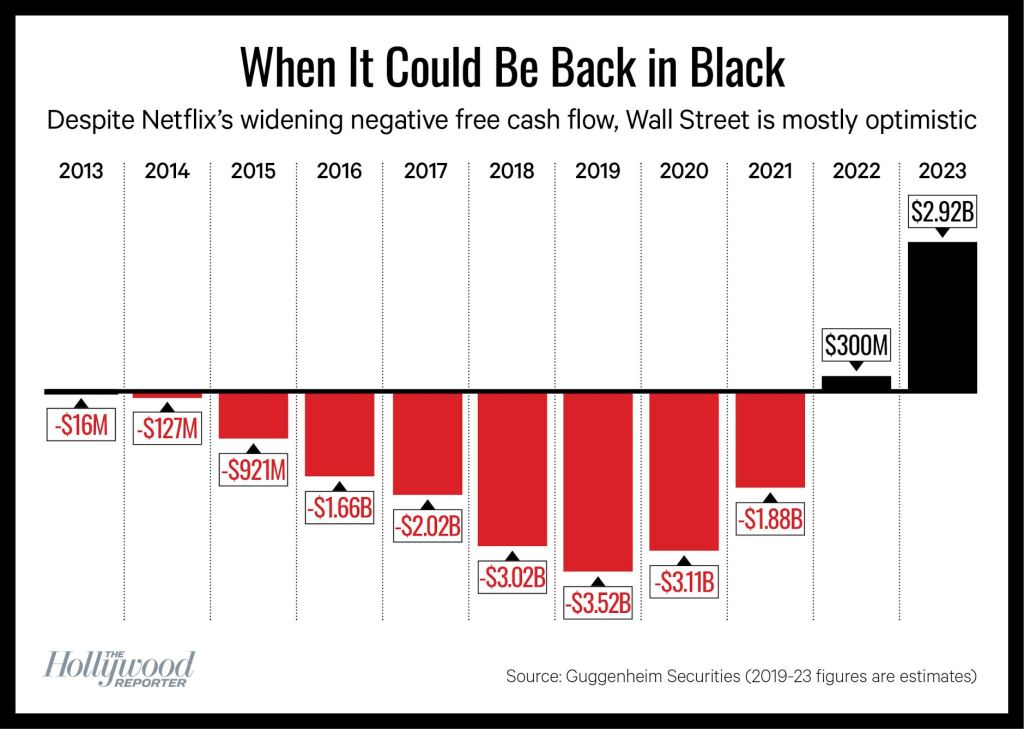