Hollywood might still be obsessed with youth, but when it comes to the theatrical market, older audiences cannot be ignored. The past decade has seen the emergence of an entire genre of films that target the AARP crowd, including the hits The Best Exotic Marigold Hotel, Book Club and the Meryl Streep-Tommy Lee Jones starrer Hope Springs. According to the MPAA, 41 percent of all movie tickets sold in North America in 2019 went to those ages 40 and up.

But as cinemas in the U.S. and around the world slowly begin to reopen after months of coronavirus lockdown, a big question hanging over the film industry is: Will older movie fans —the group most vulnerable to COVID-19 — return to theaters?

When market research group Dynata asked filmgoers in 11 territories, including North America, how eager they were to go back to the movies, it discovered a major generation gap. Of every demographic tested, the Gen Z audience — those 25 or younger — was the only group where a majority, 60 percent, said they would return to cinemas “as soon as possible” or “relatively quickly.” For the over-25s, a majority said they would come back “relatively slowly” or “not at all.” Among Baby Boomers, the 55-plus generation, nearly two-thirds of respondents said they were in no hurry to return.

Building on those figures and comparing them to demographic box office data, London-based Ampere Analysis argues that, coming out of the coronavirus lockdown, 65 percent of theater ticket revenue will come from Millennials and Gen Zs. Older audiences will only make up 35 percent. Baby Boomers alone a paltry 14 percent.

This demographic split could have a major impact on which movies are released, and which do well, in the immediate aftermath of the crisis. Teen comedies and youth-skewing horror are in. Grown-up drama and older-leaning period films are out.

“If the data is saying two thirds of your audience is going to be Gen Zs and Millennials, you’d want to focus on them with your new release titles. That’s the low-hanging fruit,” says Ampere analyst Minal Modha.

“Concerns about the older audience is a definite factor” in dating new releases at the moment, says Stuart Ford of production group AGC Studios. He points to Lionsgate’s “major push” for AGC’s Voyagers, a sci-fi thriller featuring YA-friendly actors Tye Sheridan and Lily-Rose Depp that premieres Nov. 25, and Bleecker Street’s decision to “wait and see before fixing a release date” for AGC’s The Secrets We Keep, a period drama starring Joel Kinnaman and Noomi Rapace that is targeting an older, art house audience.

“It’s something that is going through everyone’s head,” notes Andrew Frank, an executive with Canadian indie distributor Mongrel Media. “It just makes more sense for a cinema to program for the ‘invincibles,’ those 18-to-25-year-olds who don’t think anything could happen to them.”

That’s bad news for such art house distributors as Mongrel, because the audience for its films skews older. “The reality is that it could be a year or more before we’ll be able to do a theatrical release on these sort of films,” says Frank.

The COVID-19 impact on older film fans can be clearly seen in Japan,which has the world’s oldest theater-going population (according to the most recent national report, released in September 2019, seniors accounted for 28.4 percent of Japan’s population, the highest rate in the world). Exhibitor Takashi Asai re-opened the theaters in his indie cinema circuit Uplink on June 1 but the older fans stayed home.

“Usually on weekdays, about 60-70 percent of our sales are older customers — over 60 years old — who come for the morning and afternoon screenings. These are the people in Japan who have time and money,” says Asai. “[But] the media here has communicated very strongly that the dangers of Covid-19 are more serious for older people, warning them to be extra careful. So senior people are scared to go out into public, and they aren’t ready to come sit in an enclosed public space like the cinema.”

On the other side of the world, in Denmark, signs have been more hopeful. Frederik Malling Juul, head of theatrical at Scandinavian distributor SF Studios, points to the recent success of Little Women, which was the first new release out in the country after theaters re-opened there earlier this month. Greta Gerwig’s period drama was released as part of the Cinema Club Denmark program, a film club whose membership has an average age of 55+.

“This is a good sign that if older viewers are confident that theaters are safe, they will come back out,” says Juul. He notes, however, that that confidence could vary greatly between individual countries.

“In Denmark, the government has handled the pandemic really well. Everyone knows they have been over-cautious. So when they said it was safe to open theaters, people believed them. In countries like the U.K., for example, I don’t think older people will have the same confidence that it is OK to go back to the movies.”

“The challenge we face is assuring [older viewers] that cinema is a safe thing to do,” agrees Richard Parkes, the co-director of Parkway Cinemas, a family-run chain with four sites in northern England. When it reopens, Parkway is planning to expand the number of exclusive events it holds for seniors, copying a tactic used by some supermarkets in the U.S. and U.K. that reserved a specific time slot each day for older shoppers during the crisis. (As with exhibitors elsewhere, Parkway will also likely be required to the number of attendees in cinemas and enforce minimum social distancing standards.)

A recent poll by online ticketing group Atom Tickets suggests a different deciding metric — that true cinema fans, whatever their age, will return if they feel theaters are safe. Fully 77 percent of Atom Tickets customers (mainly frequent moviegoers who go to the cinema 12 or more times a year) said they are ready to come back within two months. “Our hypothesis, that younger moviegoers, Gen Z, would be more eager to return than older ones didn’t pan out,” says Atom chairman Matthew Bakal. “The real correlation was with frequency of moviegoing. If people went to the movies a lot before COVID, they want to get back as soon as they can.” 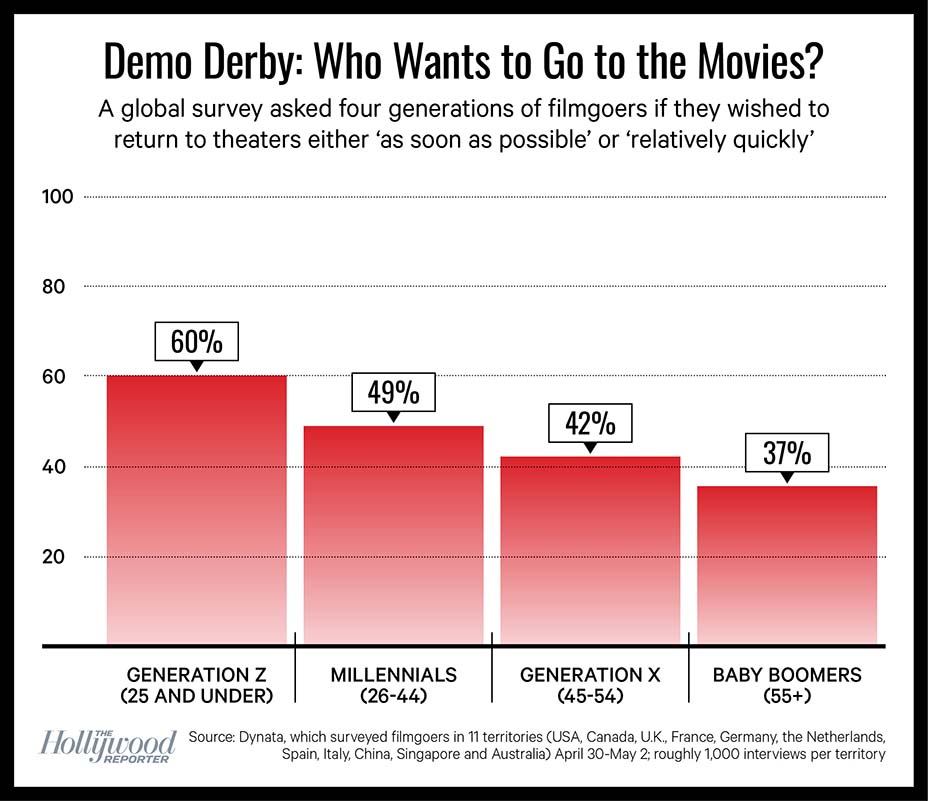 Alex Ritman and Patrick Brezski contributed to this report.