Frantic phrases, scribbles and splatters of paint cover the walls of a room-sized box at the Museum of Contemporary Art’s Geffen Contemporary (which was not affiliated with the event) in downtown Los Angeles on Wednesday night.

At a time where new coronavirus fears are on the rise, creative duo Willow Smith and Tyler Cole set out to personify eight emotional stages related to anxiety in a 24-hour performance-art piece. First up: paranoia.

“Why are we here?!?!” Cole spray painted across the wall.

Willow stepped into a human silhouette drawn under the words, “To face one’s fears is the 1st step towards understanding.”

A small group watched through a glass window as they covered the stark white walls in paint. They jumped on furniture, cowered in corners, paced the room and returned to their artwork with no perceivable method to the madness.

Over the span of 24 hours, Smith and Cole will stay locked in the box — with the exception of bathroom breaks — until they’ve cycled through paranoia, rage, sadness, numbness, euphoria, strong interest, compassion and acceptance.

Classical music blared through an otherwise silent room as crowds who were able to watch the event unfold for free (and who were politely asked not to speak) trickled in.

The exhibit isn’t the latest MOCA installation. The pair rented out the space with a goal to bring awareness to what it’s like to struggle with anxiety, which Smith has revealed she’s dealt with for much of her life. The installation coincides with the release of her and Cole’s new album, titled The Anxiety, which will drop right after the exhibit ends. 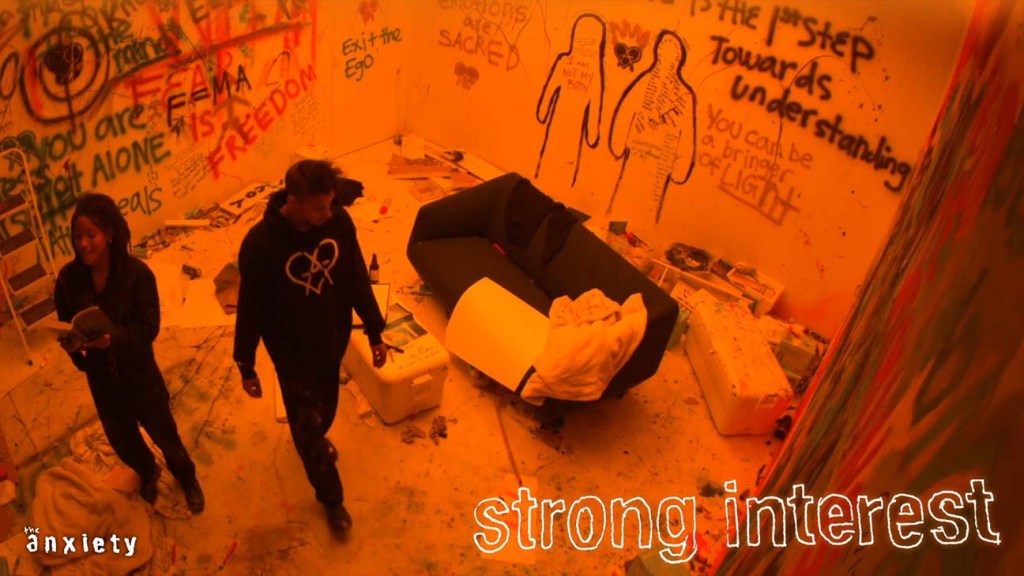 “I thought it was a different experience,” said spectator Leslie Garcia after viewing the duo during the paranoia stage. Garcia and her friends found out about the event through social media, and she said they appreciated the duo’s creative and open approach to talking about mental health.

“I feel like it was in-depth,” she said. “Not a lot of artists would put themselves in a box for 24 hours and let the public come and see.”

Outside the Geffen, more than a hundred people stood in line to catch a glimpse of the human art installation. Groups were allowed inside for only about 15 minutes at a time.

“How is it? Is it worth it?” curious onlookers asked people as they exited before they make the decision to commit to waiting an hour for the chance to experience it themselves.

Some gave an enthusiastic, “Yes.” Others left and said they still need time to process before they can talk about it.

Watching the performance live means that no two groups will have the same experience. As the two musicians go through the different emotional stages, it’s hard to know how each person will connect to what Smith and Cole are doing, or how “worth it” the wait time will be, Garcia told The Hollywood Reporter.

“Different people might be here for a different experience, something that they would be able to connect to,” she said. “This is not something you experience every day.”

For those who can’t make it to see Smith and Cole in person, or for those who want to see their take on the other seven emotions they’ll miss, the event is also being live-streamed here.