A dizzying whirl of attitude, anxiety and adolescent hormonal volatility practically pings off the walls in Sarah DeLappe’s firecracker of a debut play about a girls’ indoor soccer team, The Wolves. In one of the hilarious lines that pepper this pithy work’s deceptively unstructured series of warm-up and practice sessions, the most childlike of the players innocently confesses, “I just don’t get what the big deal is about, like, self-knowledge.” Fortunately for anyone who gets to experience Lila Neugebauer’s knockout production, which transfers to Lincoln Center after two hit runs in smaller venues last year, illuminating introspection comes more naturally to the playwright, the director and their live-wire ensemble.

A deserving finalist for this year’s Pulitzer Prize for Drama, this is a coming-of-age play that quietly digs deep while creating the illusion of simple fly-on-the-wall observation. The subtlety of the craftsmanship, the assurance of tone and the thematic incisiveness are remarkable, astonishingly so for a first work.

Following the lead of other distinctive playwrights departing from traditional templates, like Annie Baker, DeLappe has a knack for making her artfulness appear almost accidental. Her dialogue has the unwritten sound of real conversation, much of it inconsequential, even banal or endearingly silly. But out of that jumble of words comes an imperceptibly shaped snapshot of the tricky gulf separating girlhood from maturity, a portrait spilling over with humor, insight and, in the closing stretch, searing pathos — all of it undiluted by the distorting filters of the male gaze.

The play opens with an Altmanesque babble as the nine members of the Wolves go through their pre-game stretches in a circle on the green expanse of Laura Jellinek’s ingeniously unadorned AstroTurf set. As we acclimate to the cacophony of overlapping voices, it becomes clear that half the team is talking about the Cambodian genocide and the logic of sentencing a murderous despot who’s near death, while the rest are discussing the benefits of tampons over pads. In the first demonstration of DeLappe’s uncanny ability to weave in thematic substance without making a big deal of it, the most contemplative of the players notes the importance of never taking their liberties for granted. 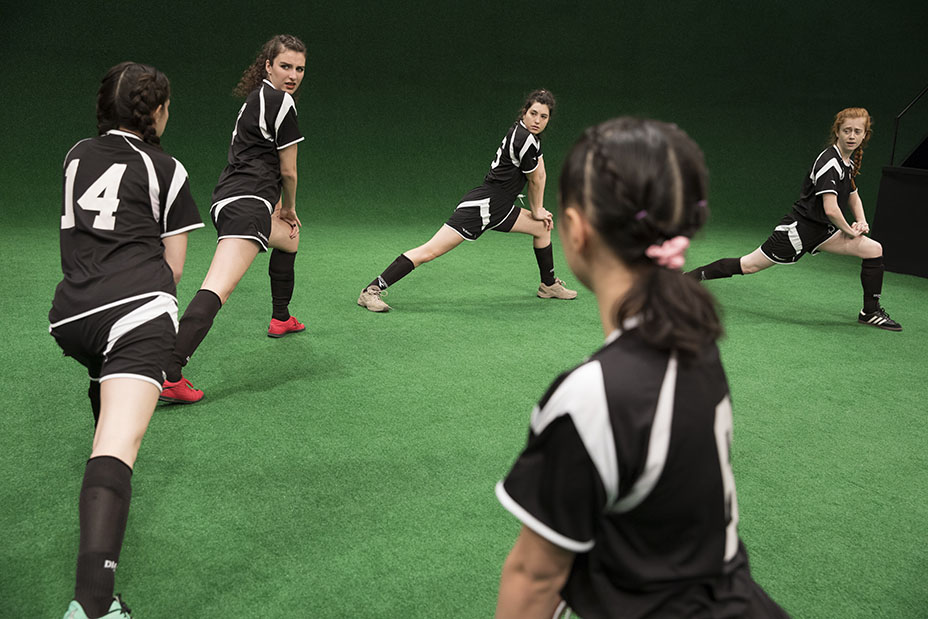 Right off the bat, the playwright makes clear that these are not reductive contemporary young-female stereotypes (the girls are all 16 or 17), spouting upwardly-inflected inanities — even when their chatter seems merely glib. The conversation stretches to include Harry Potter, religion, a Netflix documentary about Bible-thumping Southern snake-handlers (“Why would you watch a documentary?” asks one) and the unseen coach’s permanent Saturday-morning hangover. While relatively little of a personal nature is disclosed at this early stage, already, distinct personalities have begun to emerge.

Working with terrific young performers who live and breathe these girls’ experiences, DeLappe and Neugebauer cram a lot into a tight 90 minutes, creating nine fully rounded characters, along with a single adult figure (Mia Barron) who drops in toward the end for one shattering scene. What’s extraordinary though is the unexpected amount of layering afforded to each girl; aside from one almost startling instance late in the play when an actual name is heard, they are referred to only by their jersey numbers.

The natural alpha dog of the pack is #7 (Brenna Coates). On the surface, she’s all mean-girl sass, coltish self-possession and sexually experienced superiority, thanks to her college-age boyfriend. But over the course of the play, an angry rift with her sidekick, #14 (Samia Finnerty), and a challenge to her power position as striker by talented newcomer #46 (Tedra Millan), among other developments, expose the deeper shadings that make her part of the sisterhood, as vulnerable and eager to fit in as anyone else on the team.

Most of the significant action happens offstage — college scouts circling, a sidelining injury, an abortion (or was it just Plan B?), tentative steps toward a coming-out, a shocking tragedy. But The Wolves deftly avoids the pitfall of telling rather than showing, making each development vivid merely via the way the girls process it. This occurs invariably without the need to over-articulate their feelings in a manner that would be inorganic to the characters.

The economy of the writing is impressive indeed, addressing issues from maturity to mortality, from solitude to solidarity with masterful sleight of hand. The competitive aspect of their chosen sport, as they strive to make it to Nationals, is the least of it. Scene changes are marked by blackouts, with lighting designer Lap Chi Chu and sound chief Stowe Nelson conveying the kinetic energy of the games during those transitions.

Almost any one of the characters could be the play’s center, perhaps most notably the spiky #7, or the homeschooled, widely traveled #46, a chipmunk-voiced oddball determined not to be ashamed of her unconventional upbringing but at the same time aching to find acceptance among these average suburban American girls. (The play’s setting is unidentified.) 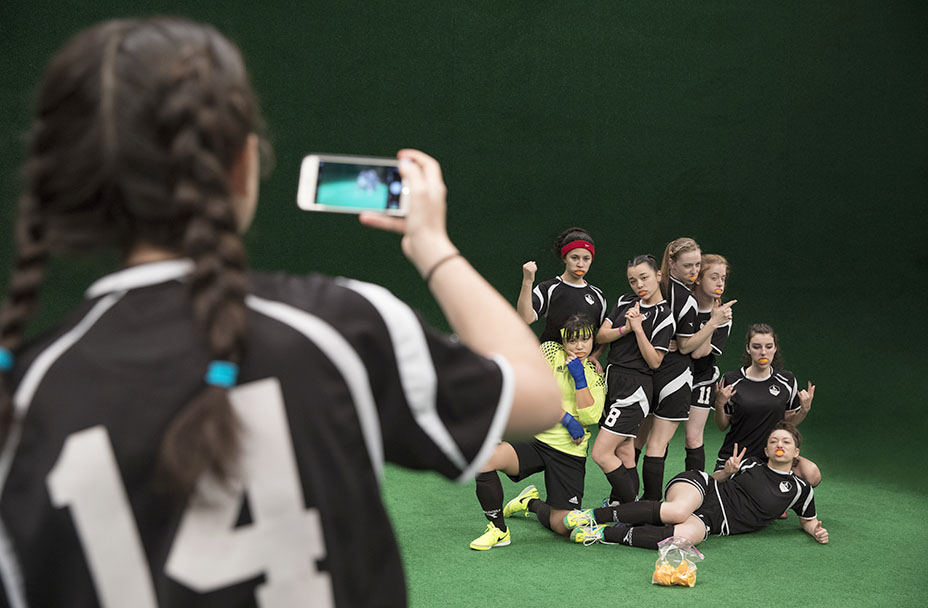 But this is a true ensemble piece. Every last character is a fleshed out person beyond her surface defining traits — including disciplined team captain #25 (Paola Sanchez Abreu), negotiating her sexuality with a minimum of fuss or embarrassment; religious do-gooder #2 (Sarah Mezzanotte), a painfully sincere secret bulimic; smart and serious #11 (Susannah Perkins), the child of two shrinks and very much the product of that environment; flaky midfielder #13 (Jenna Dioguardi), who seems likely to follow the path of her stoner brother; and diminutive defense player #8 (Midori Francis), the most disarming of the bunch, and the most reluctant to relinquish the child’s untarnished view of the world.

We come to know, care about and, yes, even love these girls, so much so that you want to draw a magic circle around them to protect them. But part of DeLappe’s point is that each of them is a person with agency, and they will hurtle forward, encountering their own losses and victories under their own steam.

Neugebauer has choreographed every drill — running, squats, stretches, practice passes — with a precision that nonetheless appears unstudied; the play is physically demanding, and the exertion seems to feed directly into the girls’ collective and individual growth. One of the most riveting scenes involves #00 (Lizzy Jutila), the taciturn goalkeeper, a high-functioning loner whose performance anxiety is so acute she throws up before each match. She stays late at one point and puts herself through a punishing solo practice routine that pushes the drama to a new peak of moving intensity, signaling a supple shift in mood.

I saw the previous engagement of The Wolves too late in the run to review, and while I regretted it at the time, it’s a thrill to be able to weigh in fresh on the play at this fiercely honed stage in its evolution. The production fits superbly on the Newhouse Theater’s sunken thrust stage, while the piece plays like clockwork yet retains an impression of dangerous spontaneity. And the actors — almost all of them with the play since its earliest incarnation — have nestled into their roles like second skins. The writing is notable for its probing specificity, and yet female or male, you will recall vivid feelings from your formative years as you watch these warriors navigate theirs. This is one of the most striking playwriting debuts in recent memory, and absolutely not to be missed.