Tamika Mallory has spent her entire year thinking about Nov. 6.

While many might associate the Women’s March only with pussy hats and handmade anti-Trump signs, the co-president of the Women’s March Board and national co-chair of the organization has, along with members of her organization, been traveling the country to encourage voting this midterm election throughout 2018. These tours are part of the March’s “Power to the Polls” initiative, which supports grassroots organizations’ efforts to inspire voting and electing officials who align with the March’s principles, including reproductive and immigrant rights.

The March’s pro-voting initiative this year emerged out of the response to the original Women’s March, Mallory says. In the wake of their 2017 event, estimated to be the largest single-day protest in U.S. history, organizers heard from political organizations that their event had inspired women to run for office. “We thought it would be really strategic to play on that energy, to really engage folks there,” Mallory says.

The 2018 March then relocated from Washington, D.C., to Nevada, which could possibly elect a female-majority statehouse — the U.S.’s first — this midterm election. Five days before this year’s midterm Election Day, Mallory is traveling on a bus with the March to Tallahassee, Orlando and Fort Lauderale, Fla., to inspire voters last-minute. “We believe that if women are empowered, everyone, all communities, will be better protected and better represented,” Mallory says.

Days before the midterm referendum on the Trump administration, The Hollywood Reporter caught up with Mallory to discuss the strategies that have been working for the March, the March’s focus on informing white women and why they’re working with incarcerated Americans.

Tell me a little bit about the idea behind the “Power to the Polls” campaign this midterm season, and your goals with it.

We knew that for our one-year anniversary after the 2018 Women’s March, we wanted to engage in a voter engagement tour, whether that be voter registration or GOTV [“get out the vote”] efforts, lots of different campaigns around voting. We wanted our anniversary to be a real strategic rollout of the next phase of Women’s March, which is electoral power. After the original Women’s March in 2017 thousands of women became interested in running for office, and we know that because Higher Heights for America, an organization that organizes on women of color, particularly black women, helping them to run for office; The Collective PAC that focuses on people of color and many women; and then of course EMILY’s List reported that after the Women’s March they received a surge in women who were interested in running. Once we found that out, we thought it would be really strategic to play on that energy, to really engage folks there.

And so instead of going back to Washington, D.C., for the one-year anniversary, we went to Nevada because we knew Nevada would be an important state in the midterm elections. It’s a place where voters there have the ability to really choose a very progressive women-led legislature. And then, throughout the year, we’ve been on tour going into communities and trying to connect very, very local issues with the larger concept of our how our vote impacts what’s happening on the local level and how, while all politics may be local, it has national implications.

What have you been doing in the cities where you’ve stopped?

Right after the 2018 Women’s March, we started holding community meetings, tying those local concerns with this broader national movement around people going to the polls in the midterms. We were having community conversations, town hall meetings, we were having smaller meet-ups where people were hosting events in their homes. We’ve also been doing campaigns like “Call Your Sister,” where we’ve been really focused on how to take back this 53 percent of white women who voted for Donald Trump and been really encouraging people to call other women. Also, we’ve been engaged in efforts to ensure that formerly incarcerated people who may or may not be able to vote could find people in their families and mobilize people in their communities to go to the polls so that the concerns of formerly incarcerated people become the concerns of everyone. [We’re] particularly getting that message over to white women — not just the 53 percent, but white women in general — that there are the unseen group of people who need their voices to be amplified through the efforts of folks that have their full capabilities of voting. 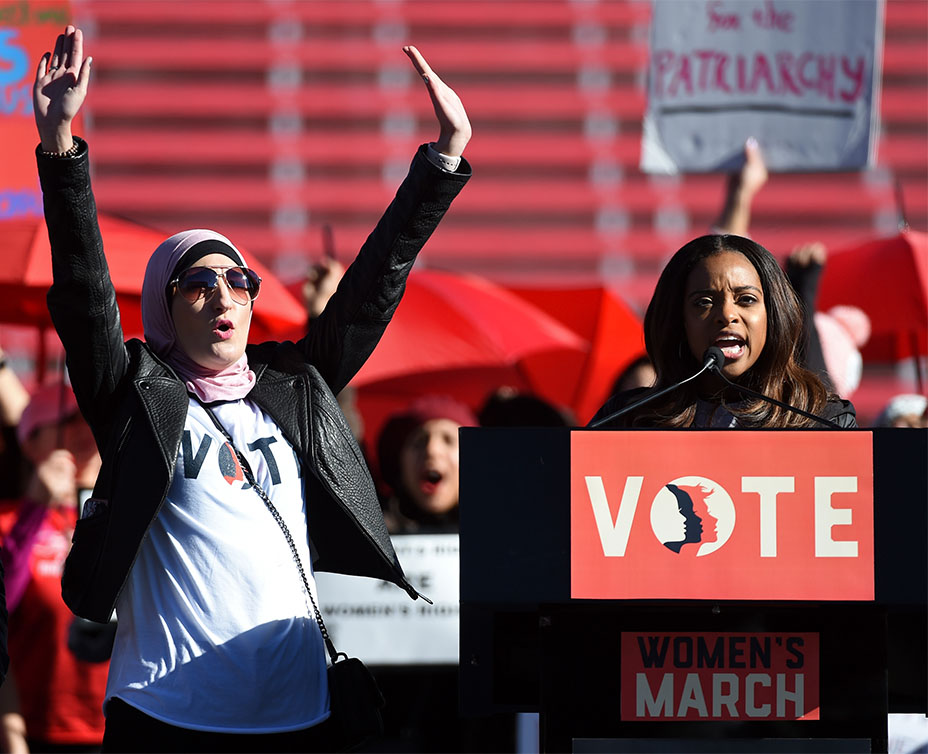 How did you settle on the locations that you visited on the bus?

Obviously swing states are important: We definitely want to win in the places that we need not just for the midterms, but looking forward to 2020, and so swing states were clearly a deciding factor for the places we chose. We also focused on places where the local concerns are really important to the broader movement, so places where people feel marginalized in general, to get folks across the country to really be engaged with the voting process.

We did work in New York City, which may not be a swing state, but we know a number of people in New York are dealing with things like poverty. New York is this big, beautiful city, it’s supposed to be one of the most progressive cities in the country, and yet, until recently, New York was one of the only states — along with North Carolina — to still try and prosecute 16- and 17-year-olds as adults for nonviolent offenses. So we did work in New York around “Raise the Age,” the campaign that we were specifically focused on. We absolutely looked at swing states, but we also looked at states and cities where there are issues that impact marginalized communities. They need to be as much a part of the process as anyone else. Our model is that all communities must be represented, everyone must be at the table.

What have you learned so far this year from your travels and the people you’ve been talking to for the campaign?

I think the impressive part is that women are more involved than I’ve ever seen us, and we’re involved with our independent thoughts. So it’s not so much what our husbands think, it’s not so much following trends, but rather women being really, really educated, and being more engaged than in all the time that I’ve been in electoral politics.

But I do think that what has been disappointing, and what I’ve learned, is that with all that we are doing on social media and in local communities, there are still folks who don’t know who’s running, don’t understand the importance of this moment, nor do they care. There is a disconnect that exists between people who are really suffering in the most oppressed environments in this country and those who are more [informed] and aware. These are folks who may be teachers and work in communities and be highly educated, but they don’t necessarily feel informed or concerned with how these midterm elections will impact their day-to-day.

And so I think there’s a lot of work to be done there, really getting information into grassroots communities, and getting information into the hands of working people, folks who are really just focused on how to make end’s meet from day to day, they need a lot of attention. And there has to be campaigns that are specifically designed to help folks who are getting by from day to day to understand how not just the midterms, but every single election in their community, and even on a national level, impacts them. 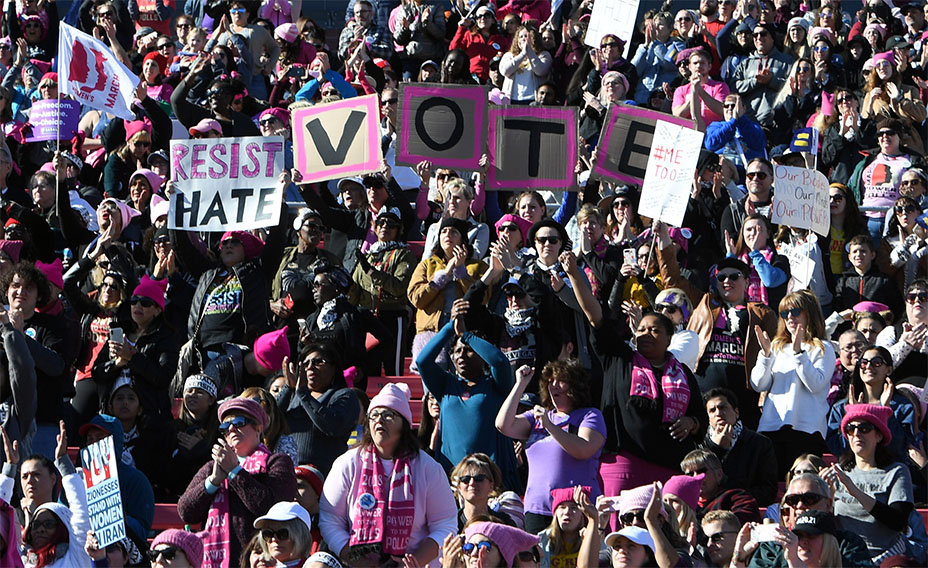 What efforts — either on your part or your affiliated organizations’ part — have been particularly effective this election season?

I think it’s been really about connecting people’s day-to-day experiences with the candidates and also with this moment that we’re in: It’s obviously been effective to explain to folks the relationship between some of the Republican candidates with Donald Trump and how those candidates’ values do not necessarily align with the mission of those people who are living in impacted communities; I think that’s been probably the strongest point. Likewise, making the cross-reference of how some of the other candidates — candidates on the other side — are much more in line with the values of everyday people.

What issues are especially important to the Women’s March this election?

On a broader scale, what is at stake for women in this election?

I think everything is at stake, right? At the very core, our sustainability and our success is really being determined in this moment. And when I say success, what I mean by that is just to maintain the ability to thrive, whether that be in business, in our health, in terms of how our families are doing: The holistic approach of what it looks like to be a woman is at stake.

Obviously from a health-care perspective, we’re very concerned with what will happen when the Supreme Court begins to address reproductive rights. But I think it’s important for people to understand that women are not a monolith, and particularly women of color. When you think about black women specifically, every issue in our community, from poverty to police violence to education to mass incarceration, concerns us because black women carry the entire community on our backs.