Shape of a reboot! Form of a relaunch!

After years as nostalgic punchlines, former 1970s cartoon sidekicks Zan and Jayna are back in a big way, with DC this week launching a new Wonder Twins comic book series as part of the high-profile Wonder Comics imprint led by Brian Michael Bendis.

The new series sees creators Mark Russell (The Flintstones, Exit Stage Left: The Snagglepuss Chronicles) and Stephen Byrne (Justice League/Power Rangers) reimagine the Super Friends duo as teens trying to come to terms with both the superhero world and the regular high school experience, with equal (lack of) success in both.

Heat Vision talked to Russell about the series.

Wonder Twins marks your first ongoing series in the core DC Universe, after successful runs on titles like The Flintstones and Exit Stage Left. How did you get involved with the book?

Brian Michael Bendis asked me to write it as part of his Wonder Comics line. We met for the first time at Emerald City Comic Con last year, which was weird because we both live in Portland and that was in Seattle; we did a panel together and he said really nice, wonderful things about The Flintstones, and then afterwards he said, “Actually, I’m doing this new line of comics about teenage heroes and I’d really love it if you would consider writing the Wonder Twins.” That blew me away, not only because he was thinking of me, but because I’ve always been a big fan of the Wonder Twins. So, immediately, I said yes.

Okay, now I have to ask: Why are you a fan of the Wonder Twins? They’re not a particularly well-regarded couple of characters, traditionally.

No, they’re not! The thing I really liked about the Wonder Twins as a kid, and it still resonates with me, is that they’re young and imperfect enough that they’re allowed to get into trouble and make bad decisions, whereas Superman and Batman are kind of godlike in how righteous they were. The Wonder Twins were given more freedom to not only make errors in moral judgment, but also be the ones who don’t have to come up with a solution for every crisis. They became more experimental characters.

That, and they have a pet monkey. I mean, that helps a lot.

I wonder how much the experimental characters angle plays into what you’re intending to do with the series. Based on the first issue, you’re exploring the idea that these are characters who get to make mistakes, but it’s not in a cruel way. For characters who have been seen as the butt of the joke for most of their existence, it’s a surprisingly heartfelt book, not a sarcastic one.

I think that most of us would relate more to the Wonder Twins than we would Superman or Batman. There’s more of the Wonder Twins in us than anyone else, which is really what resonates with me, that they’re so human — even though they’ve only been on the planet for a few months. They come here with genuine humanity and passion and, looking at the world through their eyes, they’re the ones who see how messed up things are because they’re not used to it yet. That’s really what I want to do; I want the Wonder Twins to be the prism through which I view the world, and I want other people who are reading Wonder Twins to see the world through their eyes as well.

I did not want to write them at all as these clowns, or as these objects, at all. I want them to be the subjects of the story.

One thing that’s clear from the first issue is that you have a clear idea about who the characters are. Zan and Jayna both have clear personalities, and very recognizable personalities. It’s not just that they seem believable, it’s also that, chances are, the reader knows someone like them, or is someone like them.

The way I like to view the Wonder Twins is, they’re one really well-adjusted person tragically split in half. (Laughs) Jayna is witty and well-spoken, but painfully shy, whereas Zan is kind of an oaf and always saying the wrong thing, but he’s inexplicably confident.

Neither of them seems to be content with themselves, though. Both of them want to change, in different ways. Is that because they’re aware of what they’re lacking?

I think this is what you go through as a teenager. A teenager is someone who, by their very nature, is still developing who they are. I thought that could relate to the characters more if they’re doing the same thing themselves.

I think one of the major themes of the series is that everyone deserves to be taken seriously. The series is about these newcomers to Earth, Zan and Jayna, these teenagers who are still trying to find their way and bungling through, learning how to become superheroes. But they make points and they do things that have much bigger implications than that.

For me, I really was thinking about how the post-Millennial generation, all these teens and young adults, are being handed this world that’s burning with global warming, the financial structure is screwed and we’re reverting to 1930s-style fascism all across the world, and this is the world we’re handing to them and expecting these newcomers to fix it all. This is what the Wonder Twins are experiencing; they’ve come to this planet that has all these problems and no one has noticed because we’re all used to it. They’re able to look at it with fresh eyes and see that it’s really messed up. They’re really the ones that we should be listening to more, because they are able to look at these things with fresh eyes.

It’s all about taking people seriously, because they have different insights than we do, and those are the insights that could end up saving us.

Are you writing towards a specific audience with this series? Wonder Comics as a line focuses on teenage characters, and I’m wondering if you were purposefully writing towards a younger audience. The first issue felt like something that any teenager struggling with embarrassment would have appreciated, I felt like.

I wasn’t really writing with an audience in mind, but I was hoping for that sort of reaction — somebody would read this, who is going through an intense period of humiliation in their lives, or doubting their abilities, and will find it resonates with them, and makes them feel like they’re not alone. I think that’s what I want people to feel when they read this, whatever age they are; that they are part of a bigger group, a network of human beings who share the pain and challenges with everyone.

You mentioned Superman and the other Justice League members as being godlike beings, but you also manage to humanize them in the first issue. They’re still these hyper-capable heroes who can do anything, but they also bicker and make fun of each other, and Batman has a surprisingly sensitive side, it turns out. Is that something you’re hoping to do more of?

Yeah. I definitely want to sort of give the impression that the challenges that you face, you don’t just share them with people like you, but with everyone — even characters like Batman and Superman. Even the greatest person you can imagine has gone through something like that in their life, so you’re not alone.

In terms of the godlike characters, bringing them down to earth is definitely something I want to do, because I think that you can revere somebody, or you can love them, but you can’t really do both. I want people to feel a personal connection to these characters — that Superman and Wonder Woman are big brothers and big sisters, as opposed to these icons of Greek mythology that you could never approach or get close to.

It seems a very kind series, which is something that I’ve noticed in your work since The Flintstones. There’s never an explicit request to the reader to be kinder and more open to each other, but it’s something that that’s always there.

I think that, in the end, empathy is the only superpower that matters. Very few of the world’s problems can be solved with super strength, x-ray visions or throwing someone through a plate glass window. The other 99.9 percent of the problems will be solved by human empathy. 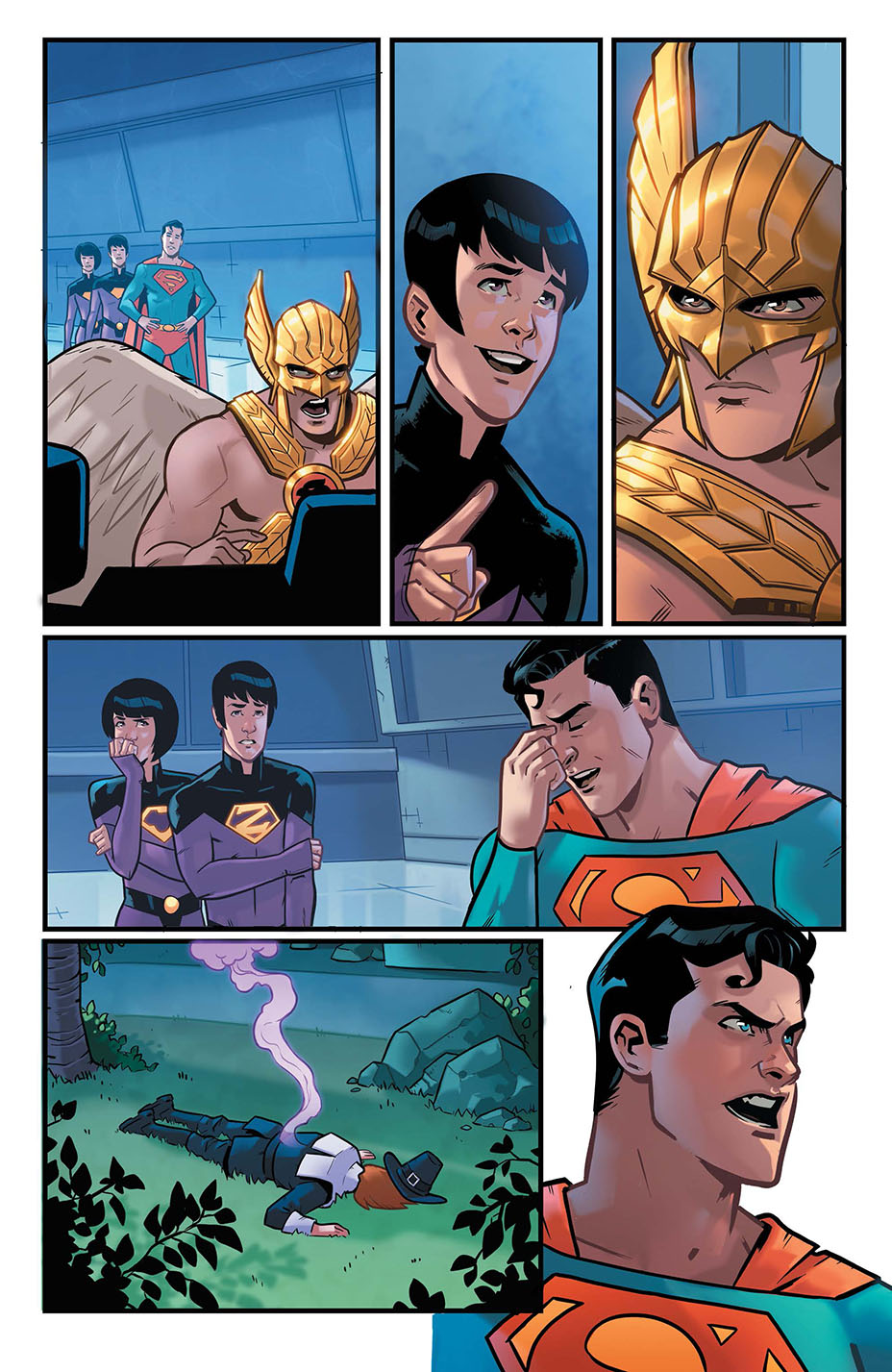 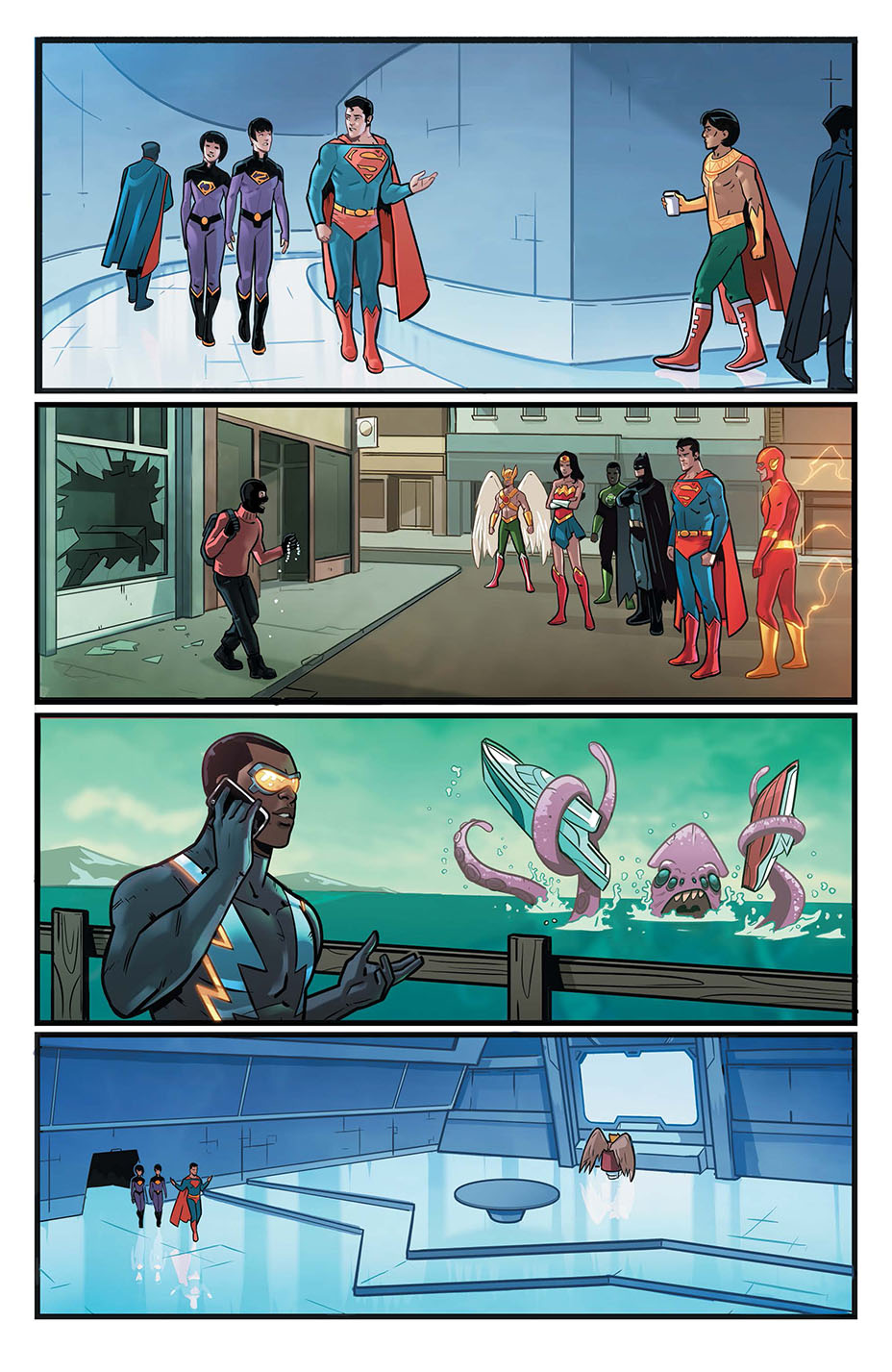 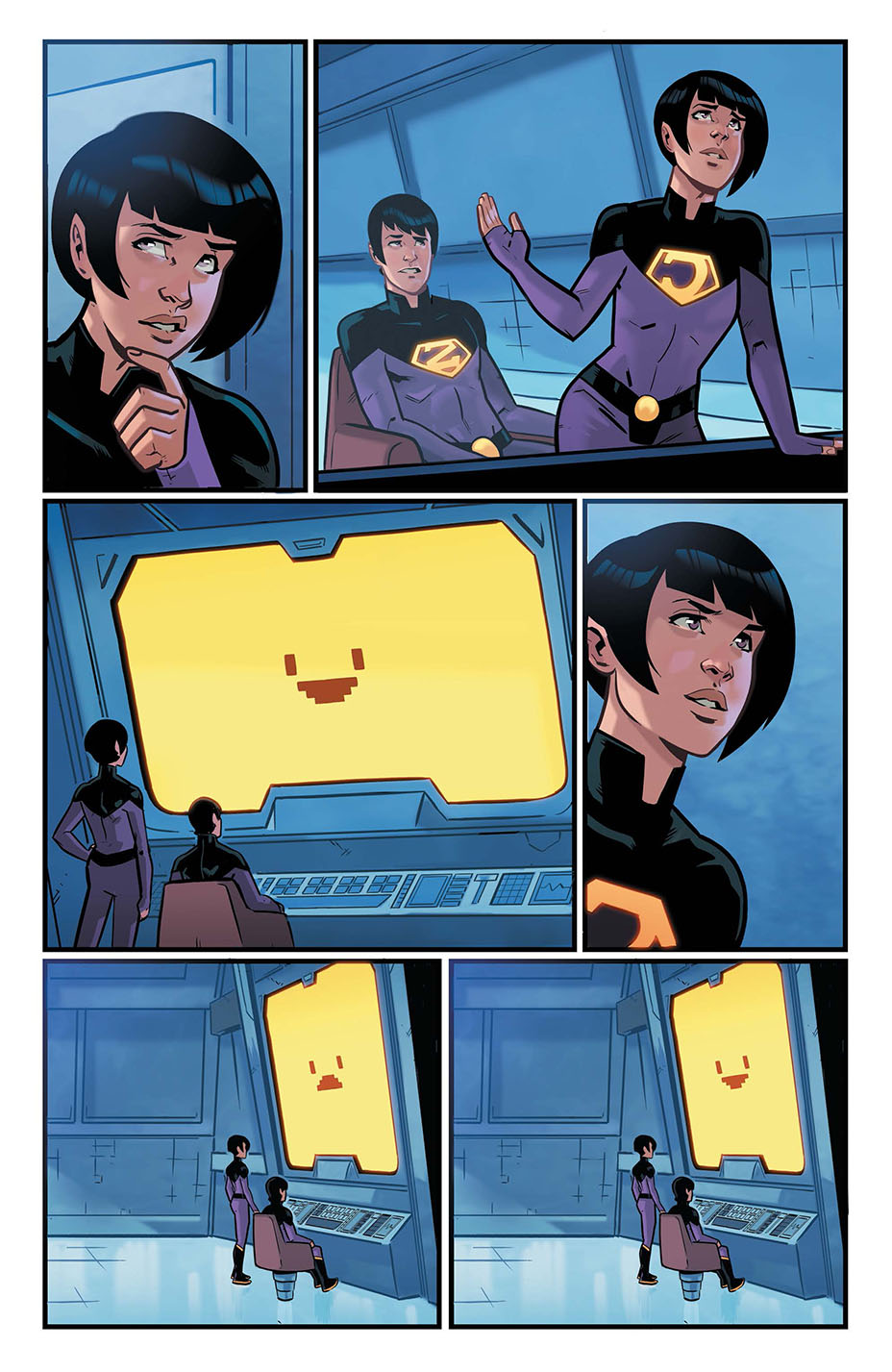 Wonder Twins No. 1 is available digitally and in comic book stores Wednesday. Above, preview art from the debut issue by Stephen Byrne.