Without Sandy Powell, who knows if Wonderstruck would have been adapted by Carol director Todd Haynes?

The Academy Award-winning costume designer first read the 2011 book of the same name by Brian Selznick, whom she met while working on Martin Scorsese’s Hugo (based on Selznick’s The Invention of Hugo Cabret), and thought it would make a great film.

“I was like, ‘Why don’t you write a screenplay?’ It wasn’t immediately, ‘It should be Todd Haynes.’ But he started writing it and showing me parts of it and then after he wrote the screenplay, I said, ‘Wouldn’t it be great if it was Todd Haynes?'” Powell recalls of her conversation with Selznick. After Haynes was done editing Carol, Powell says she gave him the screenplay to read, and “he loved it straightaway. It got the ball rolling almost immediately. And the reason I thought of Todd was, not only because he’s one of my favorite directors ever to work with, but he has such a sensitive approach. He’s such a visual director.”

Wonderstruck alternates between two parallel plots: In 1927, Rose (played by 14-year-old Millicent Simmonds), a deaf girl living in Hoboken, New Jersey, heads to New York in search of a celebrated actress; and in 1977, Ben (12-year-old Oakes Fegley), an orphaned boy, is struck deaf and runs away from his home in Minnesota to New York City in hopes of finding answers about his family’s past. Michelle Williams and Julianne Moore play supporting roles.

Powell’s early involvement led her to serve as one of the film’s executive producers, as well as the costume designer, of course. Here, Powell discusses dressing the two young leads from two different eras in one film and learning sign language on set.

Not only do you design the film’s costumes, you serve as an executive producer.

That was because I talked to Brian about the script as it happened and then introduced it to Todd. I was very much involved in the decisions and Todd talked to me about everything, not that he doesn’t do that anyway. The group of us that work on his films have done several things together now and it’s a very, very collaborative process. It’s almost like a family that operates really well together without the family squabbles.

There were two different things to research for the ‘20s. The first was the general background, which is when Rose comes into New York City in the financial district in 1927. At this time, New York was very on the up, there was big business going on in the financial district, it was affluent and thriving. We looked at street photography. Also Todd looked at 1920 films quite a lot because the black and white is inspired by films that were made in the period and films in or about New York in the period we looked at. The 1920s film that Rose’s mother is in and the 1920 stage show — that was a whole other area of research. That was looking at plays that were put on, looking at images of photographs from plays in the 1920s. Because there’s not really any fantasy elements, it’s really based in reality. That’s why street photography is best; it’s real people wearing real clothes as opposed to theatrical looking things.

Because the ‘20s in the film was shown in black and white, how did that influence the wardrobe you chose for Rose?

I think it was spring so we didn’t want heavy coats. What she’s wearing is a dress, which is really typical; the 1920s girls wore very simple shift dresses and she did have to have something over the top because she was running away from home. I didn’t want her to have a full-length coat. I didn’t want it to be a silhouette without any movement. Because the dress has a skirt in it that’s got pleats and movement, I decided on a long-length jacket would be better than a coat, even though it’s not particularly typical of the ‘20s. I found considerably fewer images of jackets on little girls than I did of coats, but I thought a jacket would give her the freedom of movement.

Everything was built. With all the kids’ clothes, we had to build everything because we had to make multiples. I started out by finding vintage clothes, and it was based on something that I found that I then adapted and made a version of.

I read that Millicent is deaf in real life. Did you learn some sign language on set?

I did. I learned from Brian. I came to Los Angeles to pull stock and Milli came to meet me for her first fitting and I realized I didn’t know how to say anything so I had to FaceTime Brian, who showed me a few key phrases. Basically I learned how to say, “pleased to meet you,” and then after that, we coped with being very expressive and talking very slowly. Her mother was there to interpret. Milli can lip read if you speak slowly. You realize you just have to articulate a lot and be clear and concise. The whole crew had a basic lesson in learning some basic phrases. I wish we had longer to do it and longer to practice. I remember how to say “thank you,” which is useful. 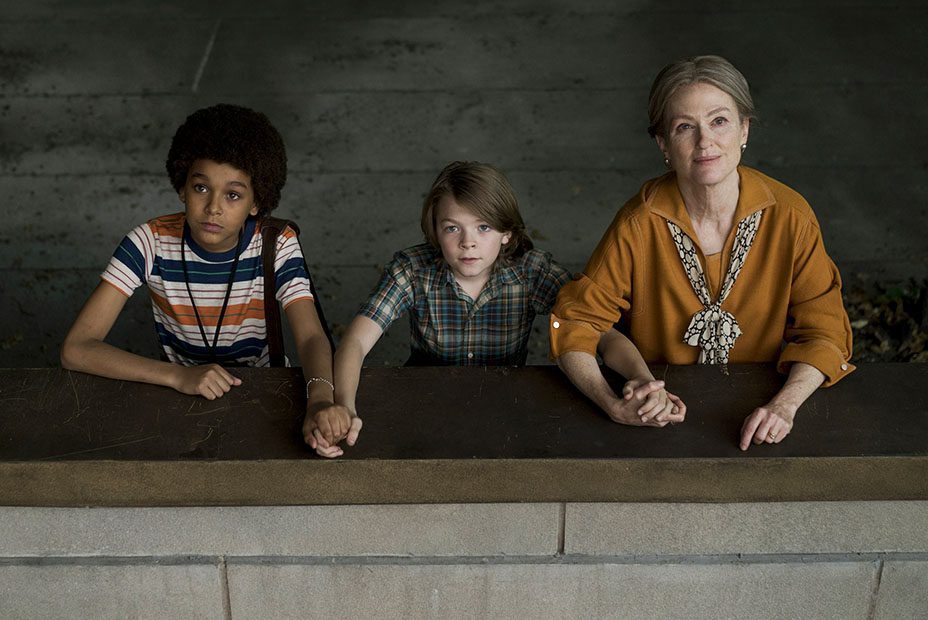 Moving forward to the ‘70s, how did you approach Ben’s wardrobe?

He’s typical ‘70s kid, but he’s not urban — he comes from Minnesota, more rural, he lives by a lake. It’s a very generic, ordinary kid with corduroy pants and a check shirt, which could almost work now, just a slight flare in the pants. It was pretty generic compared to Jamie, who is from the city. He has a bit of an urban look. He wears bell bottom jeans and a striped T-shirt. I wanted a distinctive pattern on Jamie so that he could be seen when he was running around. I wanted to show the difference between the two of them. Ben is not particularly fashionable.

Did you also reference old photos with Ben’s look?

Yeah, images of kids from the ‘70s world in general. The thing is I grew up in the ‘70s so there’s so much in my memory as well. Again, I did the same things with the boys: I tried original ‘70s clothing, which even if I found the most perfect thing, I couldn’t use because we had to make multiple for the kids because there’s stunt doubles and in case they grow, which happens.

You also have Julianne Moore and Michelle Williams in supporting roles. How did you want their wardrobe to reflect who they were within the story line?

Michelle really only has that one thing, which again, it’s a hot summer. She’s at home, casual. I don’t know if we even see her feet, but she had bare feet. I didn’t even have shoes on her. She’s just wearing jeans and a T-shirt and then with the kimono jacket over the top. We had to have her in something very distinctive that when Elaine, Ben’s cousin, wears its later, he thinks for a minute it’s his mother. It had to be an item of clothing that the audience instantly recognized as being hers and that he recognizes, but can also come off easily and quickly because she takes it off very hurriedly. That was a specific plot reason.

Julianne as old Rose, she’s in her late 60s in the ‘70s. Quite often, older people still cling on to a look they’ve had decades before, so her trousers are sort of ‘50s/’60s shape. It’s a comfortable pant that she’s maybe had for a long time or she just buys things in the same style. Then the tunic top — comfort, but also, there was an artistic, bohemian quality to it. Because she spent her life, as you later find out, making models and working with her hands, I wanted to sort of resemble an artist nod. That’s the sort of shape and kind of thing she’s worn throughout the decade and it’s sort of changed slightly. 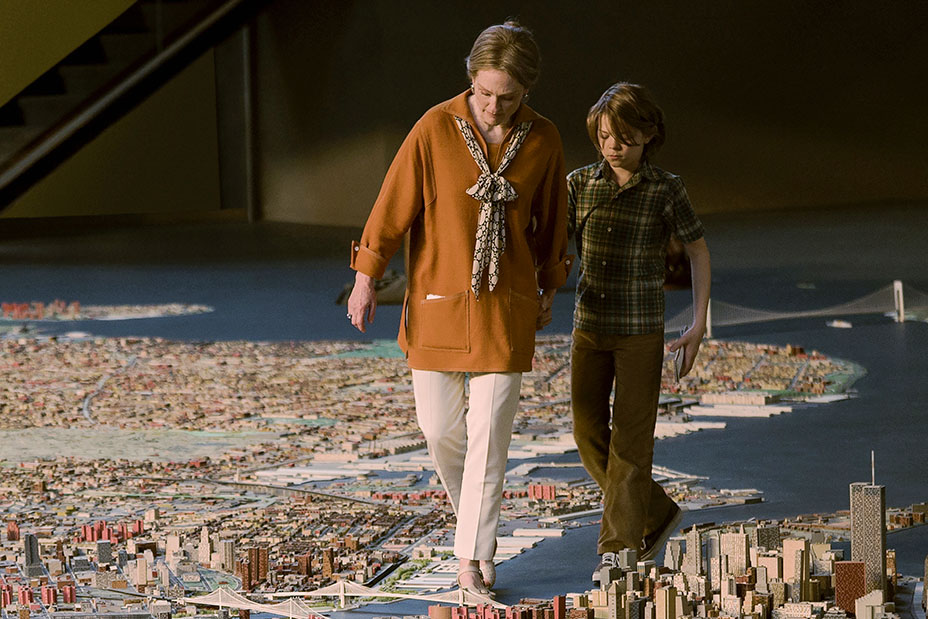 Did you find it more or less challenging to design for this film because it wasn’t necessarily as high-fashion as Carol, for example?