The Woolsey fire kept up its westward onslaught late Friday afternoon, destroying houses, shutting down freeways and consuming tens of thousands of acres in its brutal rush toward the Pacific Ocean.

Fueled by strong Santa Ana winds and an excessive buildup of dry brush in the Santa Monica Mountains, the fire had consumed upwards of 35,000 acres and growing, and forced the evacuation of some 90,000 homes. California’s Governor-elect Gavin Newsom declared a state of emergency on Friday, on behalf of outgoing Gov. Jerry Brown.

The City of Malibu, a home for many in Hollywood, ordered an immediate evacuation, describing the fire as “out of control,” even as the houses of several celebrities, including those of ABC’s The Bachelor mansion and Dr. Strange director Scott Derrickson, were going up in flames.

VIDEO: @LACoFireAirOps Firehawk helicopter flying along Pacific Coast Highway in Malibu on the way to protect life and property. This is a historic event. Please follow the direction of local authorities. (Original video, ok to use with credit) @VCFD @LACoFD #WoolseyFire pic.twitter.com/SvZSfipzfk

“We lost our home,” Derrickson tweeted, “But we are all safe and that’s the important thing. Gonna be offline for awhile.”

Woolsey is easily the worst inferno to hit the 21-mile coastal enclave since the devastating 2007 Corral Fire, which consumed dozens of homes in Malibu, including one belonging to Red Hot Chili Peppers bassist Flea, who said it had “burnt to a crisp.”

On Friday, singer and actress Cher, who lives on the Pacific Coast Highway, near Puerco Canyon, tweeted, “I’m worried about my house, but there is nothing I can do. Friends houses have burned. I can’t bear the thought of there being no Malibu I’ve had a house in Malibu since 1972.” 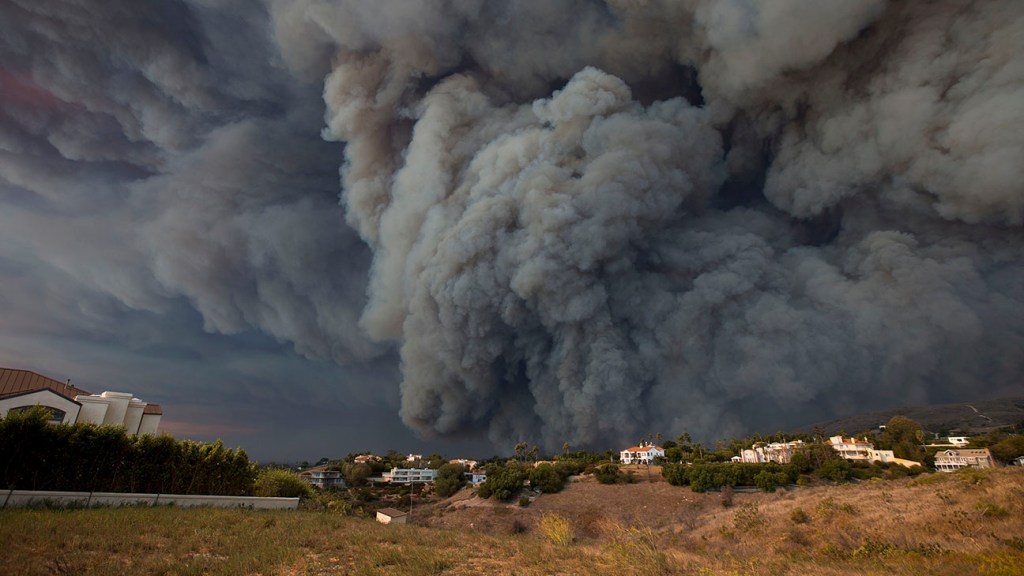 By midday Friday, authorities had closed the northbound lanes of the scenic route to allow Malibu residents to flee to safety. As of 3:30 p.m. local time, the city stated, “Fire still burning in populated areas of Malibu, no containment.”

The Shape of Water director Guillermo del Toro wrote on Twitter: “Evacuated last night. Bleak House and the collection may be endangered but the gift of life remains. Thousand Oaks and Agoura are still in danger. Malibu is being evacuated.”

The filmmaker was referring to a vast collection of memorabilia worth millions of dollars that may have been consumed by the fire.

For longtime residents of the area, the devastation was complete, even as the fire continued to roar out of control.

“I’m never going to be okay again. Everything that we’ve fought for our whole lives is burning,” said Kim Lamoire, head of the Las Virgenes Homeowners Federation. “Our neighborhoods are burning. Our wildlife is burning. Everything is burning.”

Areas adjacent to the Las Virgenes Canyon Road, which connects Malibu to the inland communities of Agoura Hills and Calabasas, were placed under evacuation orders early Thursday as 50-mph winds fanned the flames westward. Huge gray plumes rose from the mountains, turning the normally placid ocean skyline into a surreal gray mass of roiling smoke. 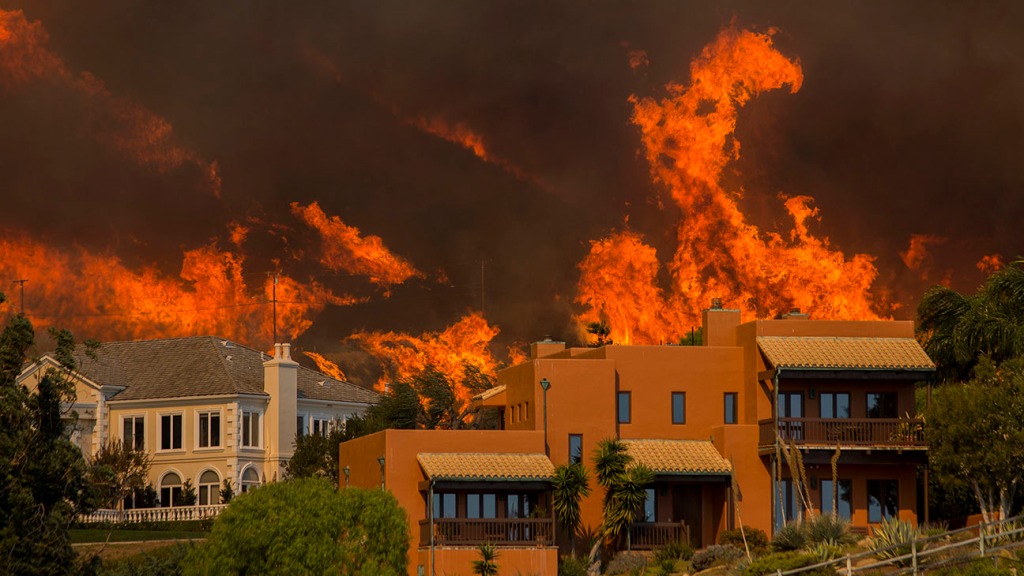 Hollywood was already mourning a piece of its own history consumed by the flames. A portion of the old Western Town of the Paramount Ranch in Agoura Hills burned to the ground. The ranch, which Paramount purchased in 1927, had been used as a location for some of Hollywood’s most iconic movies, including Bob Hope’s 1941 Caught in the Draft, as well as the site for the recent HBO series Westworld.

Flames also swarmed over Malibou Lake, a popular site for at least two dozen film shoots going back to the silent era, including Home on the Range (1924) and 2002’s The Ring. The lake sits within the 30-mile Studio Zone, which labor unions have used to help calculate hourly rates and compensation scales for workers who commute.

Several Hollywood people have weighed in on the danger Woolsey poses to the area’s animals, including a large population of horses kept by local residents in places like Monte Nido, which sits just south of the Las Virgenes highway.

“SOUTHERN CALIFORNIA! Anybody near #Malibu with a horse trailer, SYCAMORE FARM needs to evacuate 40 horses from 3661 Cross Creek Road before the fires get there! #WoolseyFire,” tweeted ?filmmaker Kevin Smith.

Woolsey, which began as a small brush fire Thursday near the Santa Susana Field Laboratory in Thousand Oaks, grew quickly and powerfully. It erupted as Thousand Oaks’ residents were still grappling with the trauma of a mass shooting earlier in the week at the Borderline Bar and Grill, in which 12 people, including a sheriff’s deputy, were killed by a 28-year-old former Marine, who was also among the dead.

“This fire is tragic on so many levels one can’t even imagine — and only 24 hours after the tragic mass shooting that hit so close to home and claimed the life of Pepperdine student Alaina Housley,” said CeCe Woods, editor of The Local Malibu.

Added Woods: “The fire pales in comparison to the 2007 fire destroying so much of our community that has survived previous fires. Historic landmarks and communities are gone. Once again, public safety is a monumental issue that needs attention. The current evacuation plan failed miserably with a 4 1/2 hour commute to Santa Monica to escape the fire, no power, no gas, no cell service. Leaving residents helpless on many levels.” 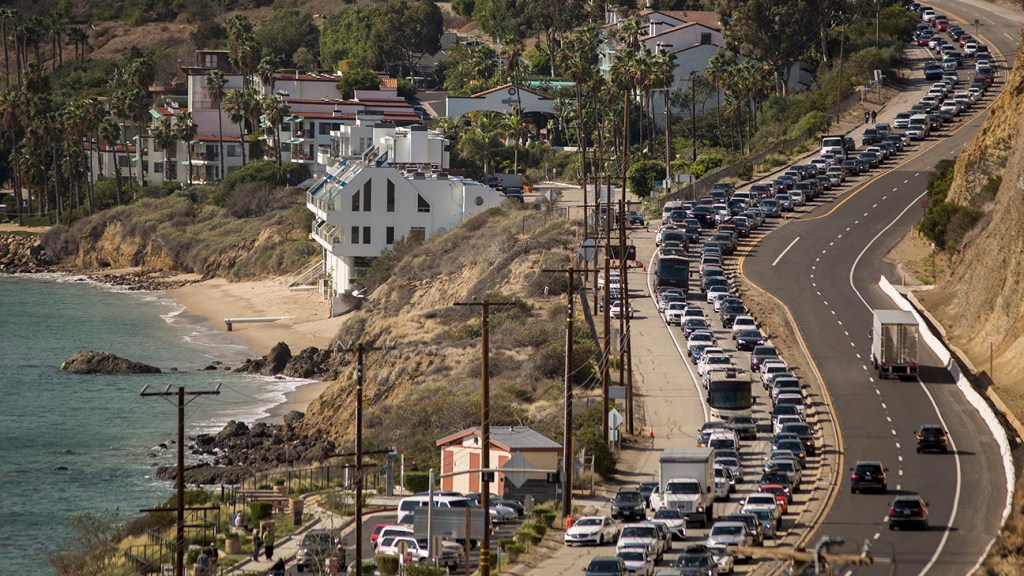