In the latest financial quarter, entertainment giants’ earnings reports revealed pain from the pandemic, but CEOs tried to focus on bright spots, touting streaming growth and signs that the TV advertising market isn’t cratering as much as anticipated.

On investor calls, industry chiefs acted largely as a chorus on advertising, with the tune being that companies held up better than feared and that April marked the low point. After slamming the brakes that month, marketers have re-engaged, boosting ad pricing, Macquarie Capital analyst Tim Nollen notes. Guggenheim Securities analyst Michael Morris calculates that second-quarter ad revenue for the media giants he covers dropped 31.3 percent.

Fox Corp. was among those that did better than that, including ad gains at Fox News. “One of the benefits of COVID-19 has been a larger news audience,” said Fox CEO Lachlan Murdoch on Aug. 4. “Our political advertising revenue is pacing more than 50 percent ahead of the equivalent period four years ago.” Meanwhile, Disney posted a much bigger decline given that ESPN was hit “significantly” by the absence of NBA and other live sports programming.

“The worst is behind us,” concluded Discovery CEO David Zaslav on Aug. 5. One day later, ViacomCBS CEO Bob Bakish echoed that there was “sequential improvement in each month of the quarter [that ended June 30],” with pharma, insurance and financial marketers returning. And NBCUniversal CEO Jeff Shell noted July 30: “While the advertising market was hit hard, it is coming back more rapidly than we anticipated.”

How quickly can advertising return to growth? Many Wall Street observers warn that it likely will take until next year. The national TV ad market declined around 25 percent in the second quarter, with local TV being hit harder, notes Brian Wieser, GroupM’s global president, business intelligence. “While all [CEOs] spoke of improving trends in the third quarter, we still expect double-digit declines at all but Disney, which gets a big boost from the NBA completing its season,” wrote Nollen in an Aug. 8 report.

CFRA Research analyst Tuna Amobi cautions that there was “likely a second-quarter bottom, but with a slower-than-expected path to potential recovery through the second half and into 2021.”

Observers say much will depend on whether live sports can return and stay on the air or if coronavirus spikes will cause delays to current reopening schedules. The same goes for the return of original programming productions that networks need to serve up fresh programming.

“We believe we can get our scripted production going again later this summer, and when combined with sports that are returning, we will have a full schedule of fresh and compelling programming on our various platforms in the fall,” said NBCU’s Shell.

Analysts also warn that the ad recovery will not be even. Bakish, for one, said broadcast ad trends have been “relatively strong,” with cable networks seeing “more relative softness.”

And local TV stations have been hit hardest, but could benefit from election season. Said Murdoch. “We are encouraged by recent trends in our local markets.” 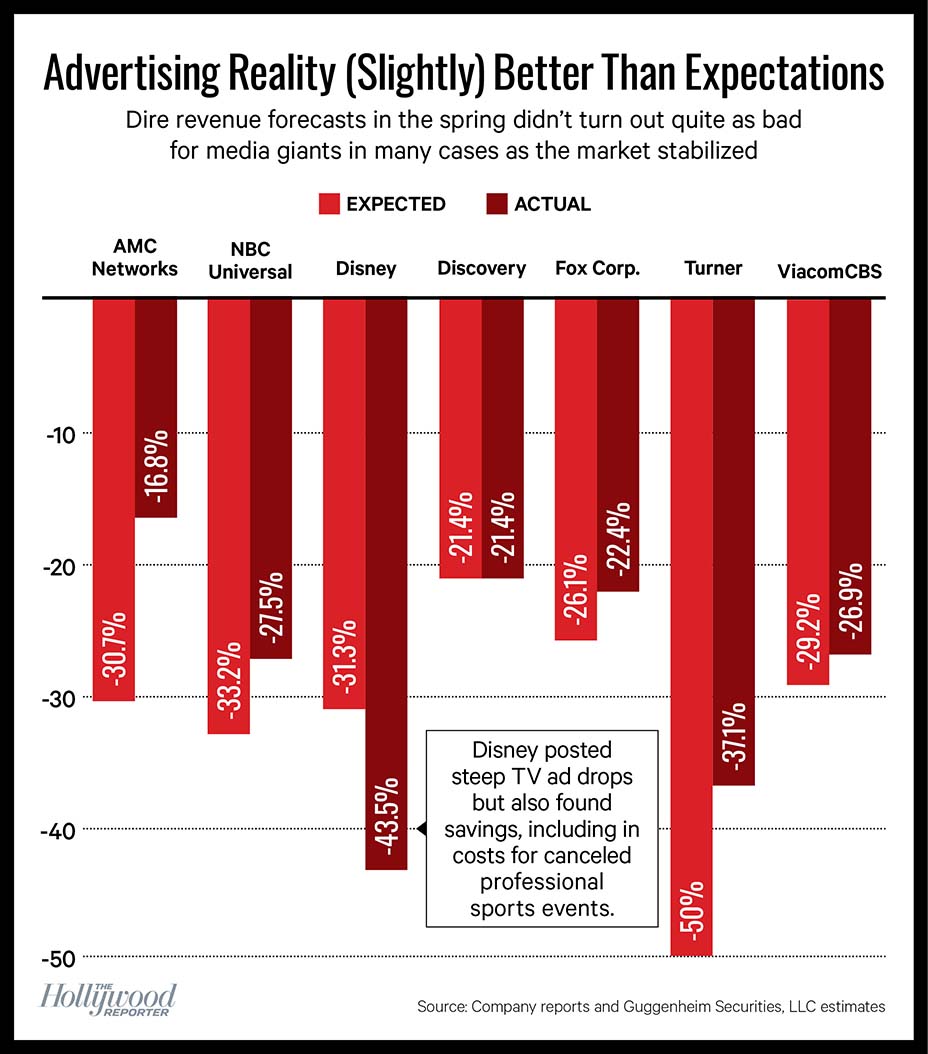