Remember the Year of the Woman? Of course you don’t, because there’ve been so many, not just in Hollywood but in the country at large. Each time a year is labeled one of change for females, it disappears into the miasma of memory because the change was never real.

The first YOW came in 1992, when an unprecedented number of women were elected to the Senate after the Anita Hill/Clarence Thomas hearings, prompting Sen. Barbara Mikulski to scoff: “Calling 1992 the Year of the Woman makes it sound like the Year of the Caribou or the Year of the Asparagus.”

Oscar made YOW its theme the following year, opening the show with a photo of 67 female winners and declaring, “Oscar Celebrates Women and the Movies.” Hollywood followed with several more YOWs — indeed, in the mid-1990s every year seemed like a YOW thanks to three studios being run by women (Sherry Lansing, Amy Pascal and Stacey Snider).

The most recent YOW came in 2018 with the double whammy of the #MeToo and Time’s Up movements, fueling hope that perhaps — possibly, maybe — Hollywood would never need another YOW. If only that were true. Certainly in the executive suites women have moved forward in leaps and bounds. But further down, change has been slow, as evident in the current Oscar race.

Academy president John Bailey noted at the Feb. 4 Nominees Lunch that more women have been nominated this year than ever before: 59 of the 212 nominees for the 91st Oscars are female, up from 51 last year. True, there’s a panoply of women filling less prominent categories such as live-action, documentary and animated shorts. But dig deeper and women are as rare in other categories as female members of the Augusta National.

How to Fix the Academy's Management Problem: Overhaul the Board

There’s not a single woman nominated for director, a decade after Kathryn Bigelow became the first female helmer to win the Oscar, for The Hurt Locker. Indeed, only one woman has been nominated since Bigelow — Greta Gerwig last year for Lady Bird. There’ve been foreign nominees for director, African-Americans, Hispanics and even never-to-be-heard-from-agains. And yet women? They’re nowhere to be found despite sterling work, this season alone from the likes of Tamara Jenkins (Private Life), Chloe Zhao (The Rider), Nadine Labaki (Capernaum) and Marielle Heller (Can You Ever Forgive Me?).

There are no female cinematographers among the nominees, though many pundits expected Rachel Morrison at the very least (she’s still the only woman DP ever nominated, for Mudbound) to earn a nomination for Black Panther. Nor are there any female film editors, composers or visual effects supervisors among the nominees.

There are only two female writers (The Favourite‘s Deborah Davis for original screenplay and Can You Ever Forgive Me?‘s Nicole Holofcener for adapted screenplay), a single woman nominated for animated feature (Incredibles 2′s Nicole Paradis Grindle) and just one for foreign-language film (Labaki).

It’s hard to blame the Academy for this. To some extent the organization is reflecting the reality of the industry, though some of the more male-saturated branches seem to vote for people they like, whether or not they truly deserve it. Meanwhile, the business lurches on at its familiar snail-like pace, women only glacially penetrating the below-the-line fields. Contrast that with film schools, where women often outnumber men. So when will the tipping point come and when will Oscar reflect it?

Not until the Academy itself does more to promote change. It’s already taken a giant step toward increasing diversity among its members and has introduced a large-scale educational/internship program. Now it should push for a full embrace of women throughout Hollywood, just as individuals like Ryan Murphy, Brie Larson and Michael B. Jordan have done.

If the Academy threw its weight behind Frances McDormand’s demand for an “inclusion rider” (a contractual requirement for diversity) — which briefly made a splash at last year’s Oscars, only to recede from view — the studios, networks, agencies and other pillars of the establishment might take action. And the Oscar nominations would prove it.

Change is already underway. Speaking at the first-ever BRIC Foundation talent and innovation summit Feb. 9 in Los Angeles, USC professor Stacy L. Smith (an expert on gender in media and director of the Annenberg Inclusion Initiative) said for the first time she has begun to feel optimistic based on her latest data. There’s a 12-year high in female leads or co-leads for 2018’s top 100 box office films — up from 32 percent in 2017 to roughly 40 percent, according to Smith. Still, behind the scenes, her latest data shows no improvement.

Until wholesale change happens, victories will be picayune when they should be pervasive — like having five women producers nominated for best picture this year (The Favourite‘s Ceci Dempsey and Lee Magiday; Roma‘s Gabriela Rodriguez; A Star Is Born‘s Lynette Howell Taylor; and Vice‘s Dede Gardner), even though 20 men were nominated alongside them.

The Academy can’t tell the industry what to do, but it can and should use its bully pulpit. 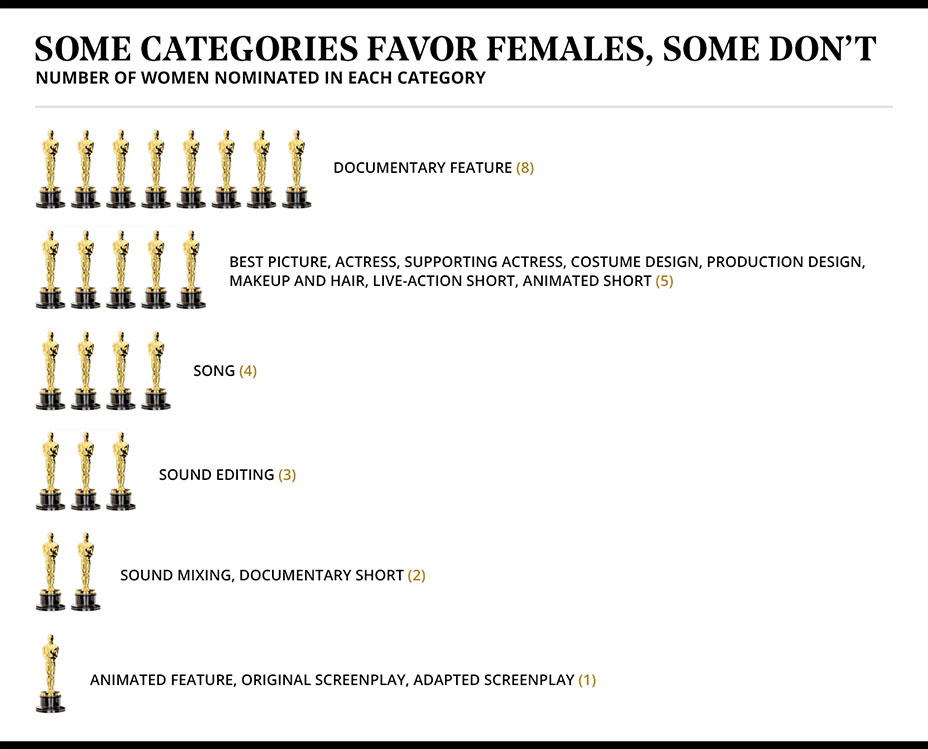