Music takes center stage at this year’s Tribeca Film Festival, with a schedule populated by projects that tackle everything from Harlem’s iconic theater (opening night film The Apollo) to the Wu-Tang Clan (Showtime’s Of Mics and Men) and The Beatles. The latter’s music will be featured in the Richard Curtis-Danny Boyle team-up Yesterday, which centers on a struggling singer-songwriter (Himesh Patel) who discovers that he’s the only person on the planet that remembers the British rockers. The Manchester, England-born Boyle, 62, talked to THR about casting his lead, his favorite song by the Fab Four and re-creating their rooftop concert.

How did you first get involved with the project?

I’ve always loved Richard Curtis’ work. I did the opening ceremony at the Olympic Games in London in 2012, and there was one sequence with Rowan Atkinson playing Mr. Bean, and Richard very kindly helped us with that. That [ceremony] also featured some Beatles stuff with Paul McCartney at the end. So I had a little bit of history with both, and then Richard sent me this script. It’s both delightful and delicious — a lovely confection. It’s also, in a very gentle way, profound about time and memory and love.

It’s not an obvious one. “Hello, Goodbye” is my favorite, among who knows how many favorites you could ever think of. I have a twin sister and a younger sister as well. My parents would play the songs downstairs, when we’d been put to bed. This was when they first came out — the “Love Me Do” and the great “She Loves You” and all those. When we were 8 or 9 years old, we all shared a bedroom upstairs and we used to play The Beatles. My twin sister was in love with Paul McCartney, so she was Paul and I was John and the youngest sister could be either George or Ringo. It was terribly unfair and that was probably the truth for George and Ringo, throughout their lives.

Did you have to get Paul’s and Ringo’s approval to use their music?

There’s a business process, obviously, but you also have to deal with them as individuals. I wrote to them, not asking for their blessing because you don’t want to put them in that kind of position. We got some very wonderful messages back. We were very lucky. Not to have their blessing — we should not pretend that — but we did get their support in the film. 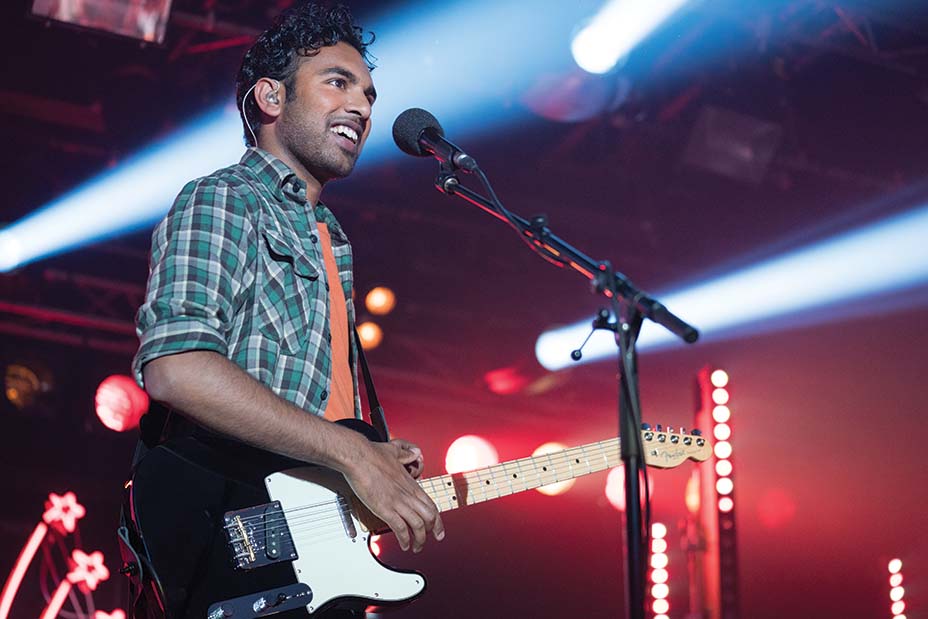 How did you cast your lead?

We saw some really good actors. But when people sang the songs that was a different judgment really. I was not really happy until I met this guy, Himesh, whom I did not really know and whom the casting directors brought in, unexpectedly. I remember he played “Yesterday,”  an acoustic version, and an upbeat [version] of “Back in the U.S.S.R.” It was one of those moments you get about three or four times in your career where you go, “That’s him. I don’t care what anybody higher up says to me about inappropriate casting or whatever. That’s him.” Because those songs, I don’t know what it is — and I can’t define it now — but they speak through him in a way that nobody else got even near. It’s not like karaoke or impressive virtuosity or over-reverence or an agenda. They’re pure. You just hear the songs, again.

When the trailer came out, people really responded to Ed Sheeran’s role in the movie. Was he written into the original script?

Yes, and he wrote an original song for us in response. He basically said he wanted to do a proper bit of acting. He came to rehearsals and took it very seriously. He’s got a great sense of humor — thank God — about himself and about the whole pop star world. He was in the middle of a world tour, which he’s still in the middle of, and we’d go and watch him play for 80,000 people and then turn up at our rehearsal and he’s just a regular guy. I know that’s his schtick, but it’s genuine. I think he found it really compelling and curious that Jack’s story is in many ways his own story of being propelled from obscurity to an incredible level of unimaginable fame. He let us use his crowd at Wembley, and I got Himesh to play for Ed a couple of times and Ed was very complimentary in a very supportive and also genuinely positive way. That meant a lot to Himesh, I think. To play live in front of people is a different thing than playing live in front of Ed Sheeran.

Did you have a favorite day on set?

There’s a little town, it’s called Gorleston, and it’s below and very much in the shadow of a more famous town called Great Yarmouth, which is a seaside town. [Gorleston] is where we did the concert on the rooftop — the “Help!” song. We’d been filming around the town quite a bit and we tried to establish good relationships. It’s a little bit of a forgotten town with a beautiful beach and lovely people. About 6,000 of them turned up on the day for free. We didn’t have anything to offer them other than water. We couldn’t even feed them. We don’t know if it’s a world record, but it’s definitely a British record for largest number of extras ever in a film. They turned up and when they heard this punk version of “Help!” on the rooftop played by Himesh, and they just went mad. You can’t buy that stuff.