Bailey Sarian, the popular YouTuber with 4.8 million subscribers who mixes passions for true crime and makeup on her hit series Murder, Mystery & Makeup, is taking on another platform.

Sarian, whose episodes regularly generate millions of views on YouTube, has teamed with Wheelhouse DNA — the digital media arm of entertainment, marketing and investment enterprise Wheelhouse — to launch Dark History, a franchise that will be produced as a podcast and video series. Also under the deal, Sarian has entered a production pact with the company.

Dark History, an Audioboom Original, debuts June 2 and will air weekly on Wednesdays wherever podcasts are available. A video version of each episode, also produced by Wheelhouse DNA, will post the following day on Sarian’s YouTube page. Sarian will also continue to debut new episodes of Murder, Mystery & Makeup on Mondays.

How An OG YouTube Creator Thinks About the Rise of TikTok

Dark History will find her examining “the dark underbelly and hidden secrets of both well-known and lesser-known stories from U.S. and world history,” per today’s announcement. The premiere episode will zero in on the DuPont chemical scandal with other episodes slated to tackle the Armenian genocide, birth control trials, Juneteenth, the Zoot Suit Riots that occurred in 1943 Los Angeles, among other stories.

Dark History marks a storytelling expansion for Sarian as she previously focused on murders in the same vein — both notorious cases and lesser-known crimes. “Storytelling is a newfound passion of mine and I’m so excited to bring people into a whole new world with Dark History,” Sarian explained. “This is different from Murder, Mystery & Makeup because I will be focusing on stories throughout history, there are a ton of lesser-known history stories that I’ve come across over the years and thought to myself, ‘Why didn’t they teach us this in school?’ I don’t have the answer for that, but let’s talk about what happened.” 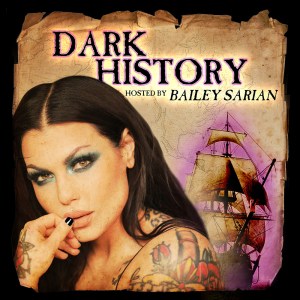