Not all tweets were positive, and a new study tries to answer whether viewers were disappointed at the series' end, or the fact that it ended at all.

Twilight: Breaking Dawn -- Part 2 not only was the highest-grossing film this Thanksgiving weekend, it also generated the most number of tweets. According to a study conducted by USC Annenberg and IBM of more than 5 million movie-related tweets in the 11 days leading up to and through the Thanksgiving weekend, the film grabbed the lion's share with 4.25 million, far surpassing No. 2 Skyfall, which generated 700,000.

But the volume of tweets is just part of the story of a research project that IBM researchers hope will influence the future of entertainment.

The researchers also looked at the "social sentiment" around various films and discovered that the number of tweets deemed "positive" for Twilight was behind some of the other movies now in theaters. Before its release, the latest Twilight film was generating 90 percent positive social sentiment; but by Saturday, that had dropped to 75 percent. Other films like Skyfall (90 percent positive), Red Dawn (96 percent), Life of Pi (91 percent) and Rise of the Guardians (99 percent) were provoking more unconditionally agreeable sentiment (see graph below). 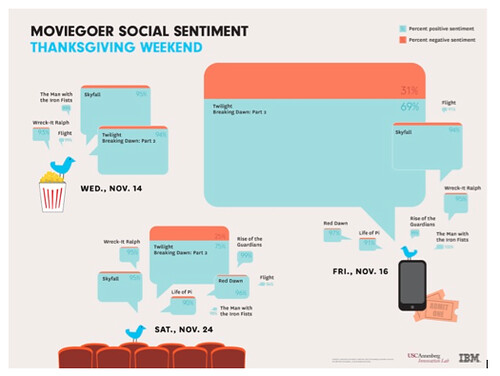 In 2011, IBM tasked "Watson," an artificial intelligence computer system, with beating humans on the TV game show, Jeopardy! If the goal of that project was to teach a computer to become more intelligent, the latest aims of the IBM research team is to educate a computer to be more emotional.

Although some of the tweeted words directed at Twilight were perceived as negative, that doesn't fully encompass the range of sentiment that viewers of the film could be expressing. For instance, were Twihards disappointed that the ending hadn't measured up to expectations? Or were Twihards expressing their sadness that the multi-chapter saga was finally coming to a conclusion?

According to the IBM researchers who employed analytics and natural language processing technologies to study the tweets, the latter was the case. They found that some of the sentiment was reflecting the "audiences' emotional reaction to the 'tear-jerking' moments in the movie."

The conclusions also came after the researchers tweaked the computers to better filter for sarcasm and other emotions that computers find difficult to appreciate.

IBM isn't the only analytics firm racing to reach beyond box-office numbers and TV viewership ratings to help companies understand how viewers are interacting on social media over entertainment content. In the past couple of years, measuring so-called "engagement" has become a buzzworthy endeavor in the entertainment industry.

Steve Canepa, general manager for IBM’s Media & Entertainment Group, says this is partly due to necessity. He says that studios once had the luxury of slowly releasing a film, building audience momentum over time and adjusting marketing campaigns based on what was or wasn't working. But now that social media audiences are rendering their snap viral judgments, Canepa believes it's more important than ever that studios adapt likewise by getting their marketing correct at a film's launch. And that means understanding more quickly than ever how audiences are reacting.

"What we are doing is essentially creating a focus group in real time," he says. "We are attempting to understand what are they saying, what motivates people to see movie." 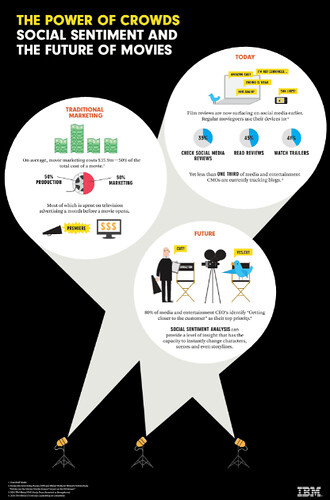 For now, the science of understanding sentiment on Twitter is being highlighted as a potential marketing tool for movie studios and TV networks (see graph above.) But the potential applicability of predictive analytics goes further.

Jonathan Taplin, director of the USC Annenberg Innovation Lab, notes that TV networks soon might be able to understand -- during an episode of American Idol or The Voice, for instance -- which singers are driving audiences to change the channel. Canepa adds that predictive analytics driven by social sentiment also might help researchers appreciate which film and TV storylines work best in particular genres to precise demographics. Or which Hollywood stars match up best with each other.

But Taplin is careful about predicting a day when "Watson" might graduate from Jeopardy! success to pick which film and TV projects to greenlight or choose which actors to cast.

He says, "I don't believe studio heads will have to worry about their jobs."