Taylor Swift and Selena Gomez shut down the American Music Awards red carpet on Sunday, stunning in two green gowns ahead of their performances onstage. See which musicians join Swift and Gomez on The Hollywood Reporter‘s list of the 12 most memorable fashion looks at the 2019 AMAs (hint: three of them were named this week as some of the most influential stars in fashion). 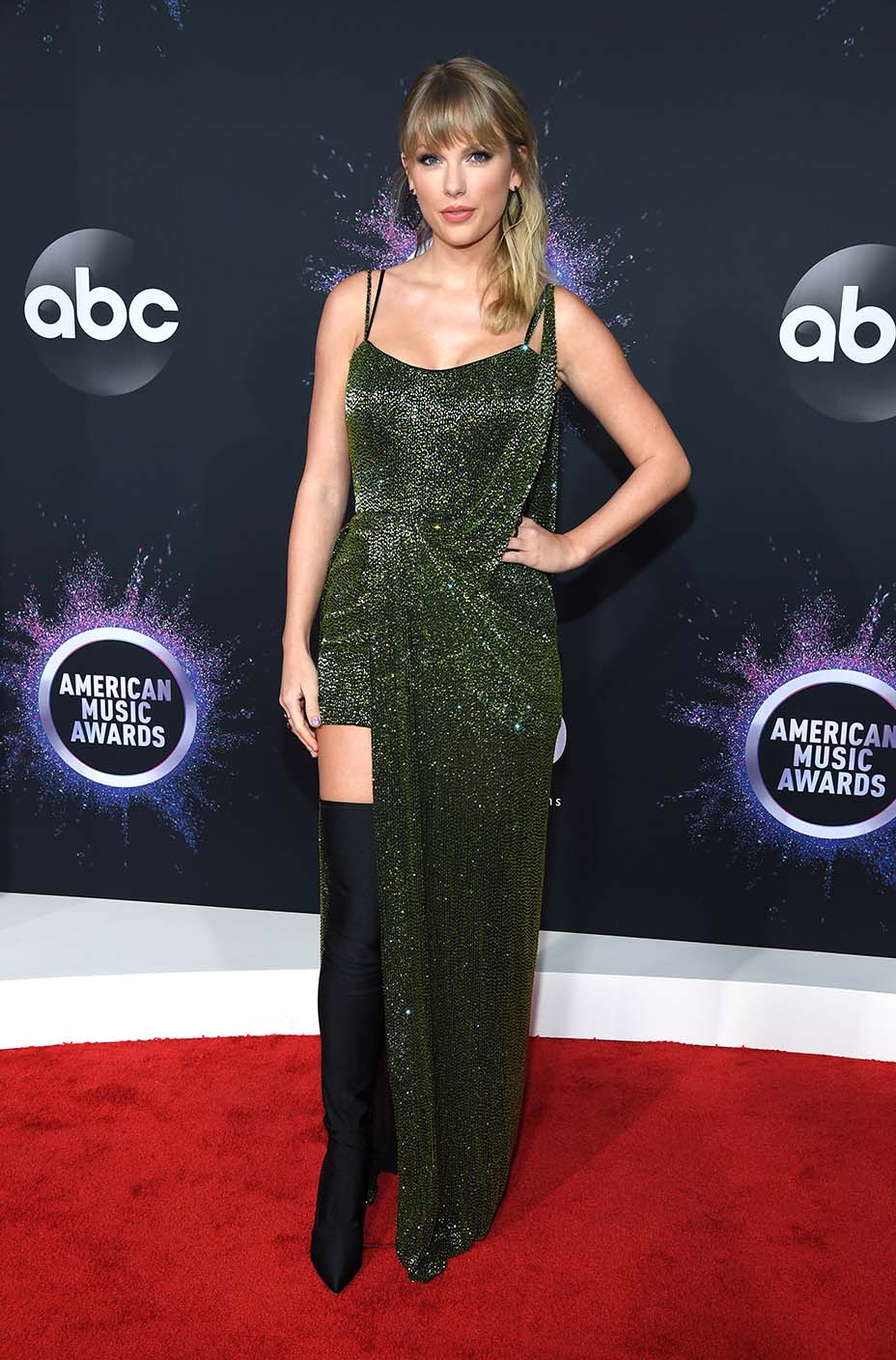 Swift broke away from her pastel-hued Lover era and threw it back to her Reputation days with an asymmetrical, custom Julien Macdonald dress and thigh-high boots. The olive green gown brought to mind the sparkly, snake-y style from her last album, which was all about managing her public image. It was fitting that Swift, named Artist of the Decade, rocked a darker glam aesthetic for the AMAs, which took place just days after she settled a public feud with her former record label, Big Machine. 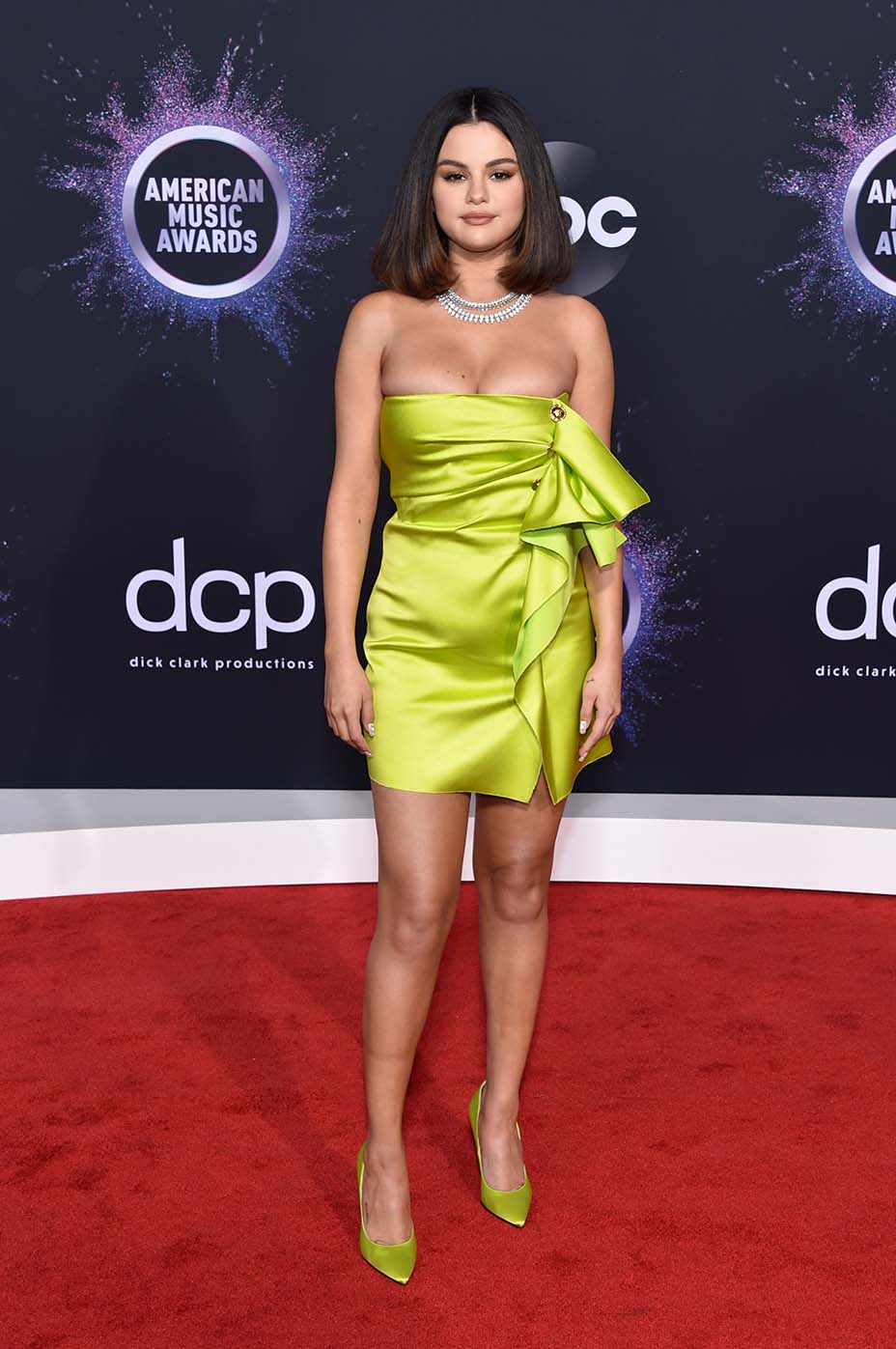 Look at her now — Gomez wowed in a strapless, lime Versace minidress with plenty of bling, thanks to that Roberto Coin Cento diamond necklace. “The most brilliant star on the red carpet tonight,” the jeweler wrote on Instagram.  When Gomez debuted her two new singles and a “strong sexy” sense of style last month, her stylist, Kate Young, told THR, “We’re just beginning!” 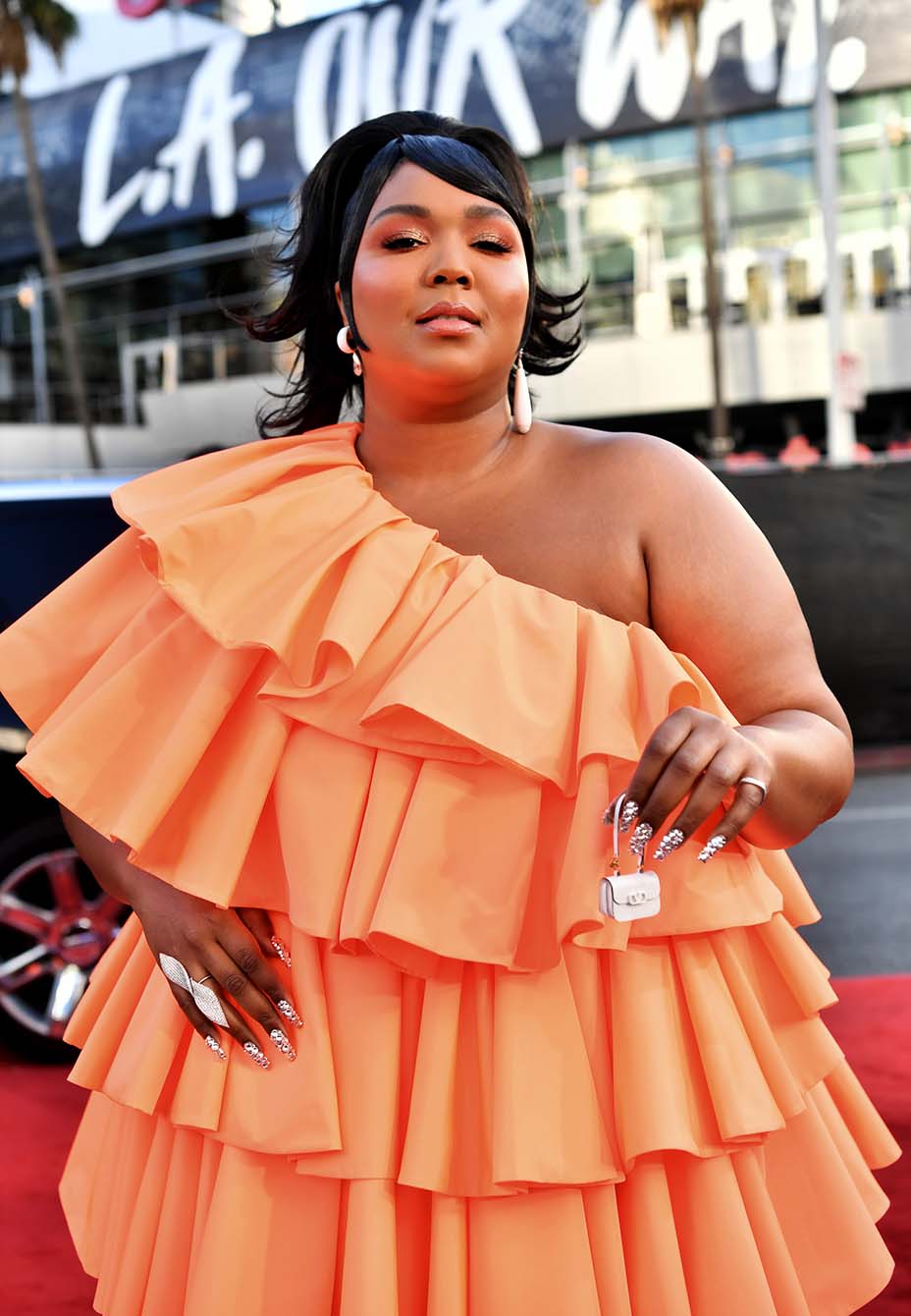 Proving Barbie comes in any size, Lizzo carried the micro-bag to end all micro-bags at the AMAs. Her doll-sized purse upped the attitude of her custom one-shouldered, ruffled Valentino dress. “Iconic orange,” stylist Marko Monroe wrote on Instagram. “So proud of this angel for always being ready to put the *wink* back into the red carpet.” In addition to the Valentino bag, Monroe added Stuart Weitzman’s white patent Aleena mules, Lorraine Schwartz jewelry and Ofira jewels. “Bag big enough for my fucks to give,” Lizzo wrote. “Big body bitch in a Valentin-HO custom look.” 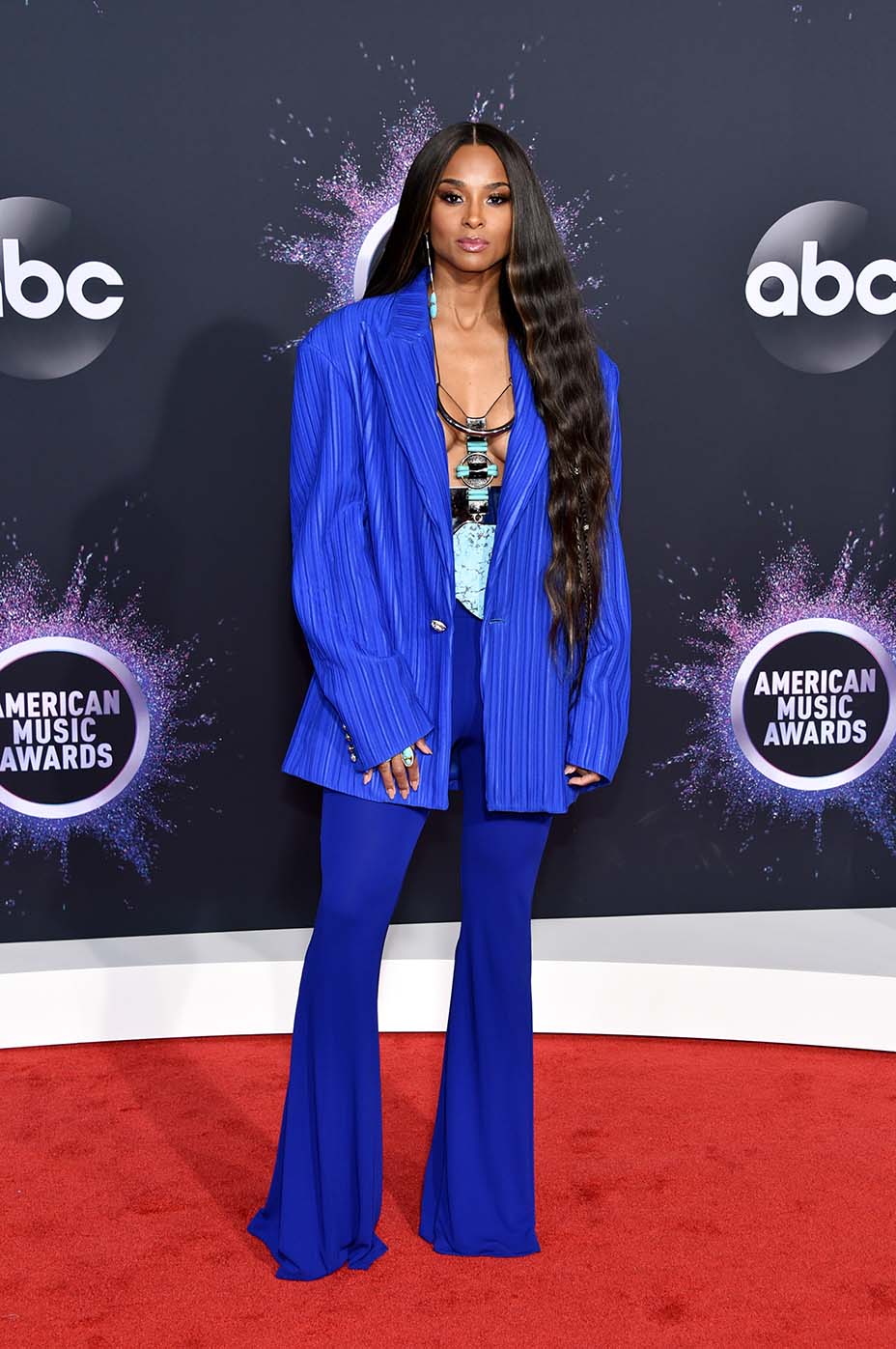 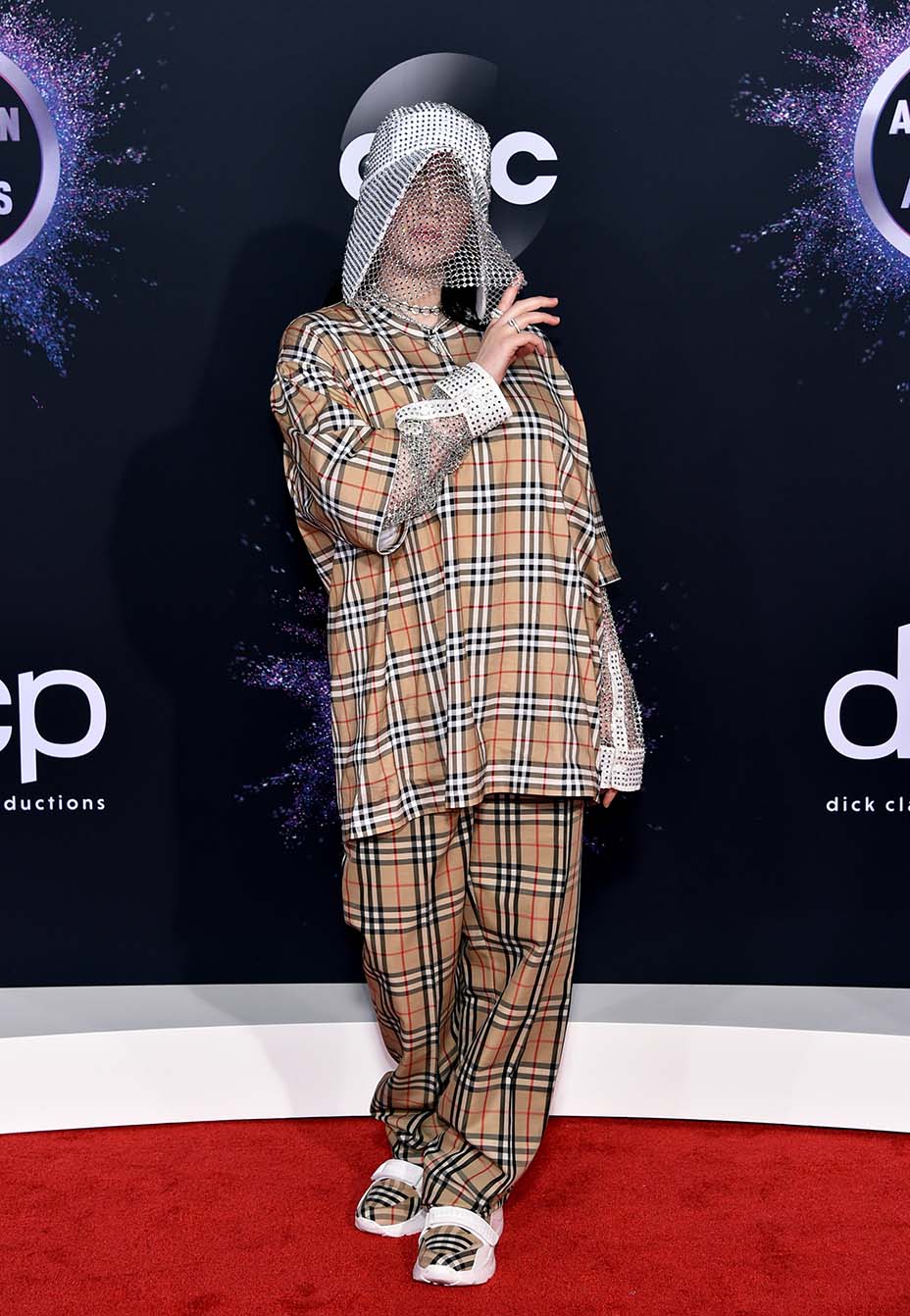 A new Grammy record-setter, Eilish took to the AMAs red carpet in an authentic Burberry ensemble (unlike the Louis Vuitton knock-off she wore to Coachella). The “Bad Guy” singer sported a Burberry Vintage oversized tee featuring crystal mesh sleeves, along with wide-leg trousers and a matching crystal mesh bonnet with a veil that was almost Handmaid’s Tale meets beekeeper. 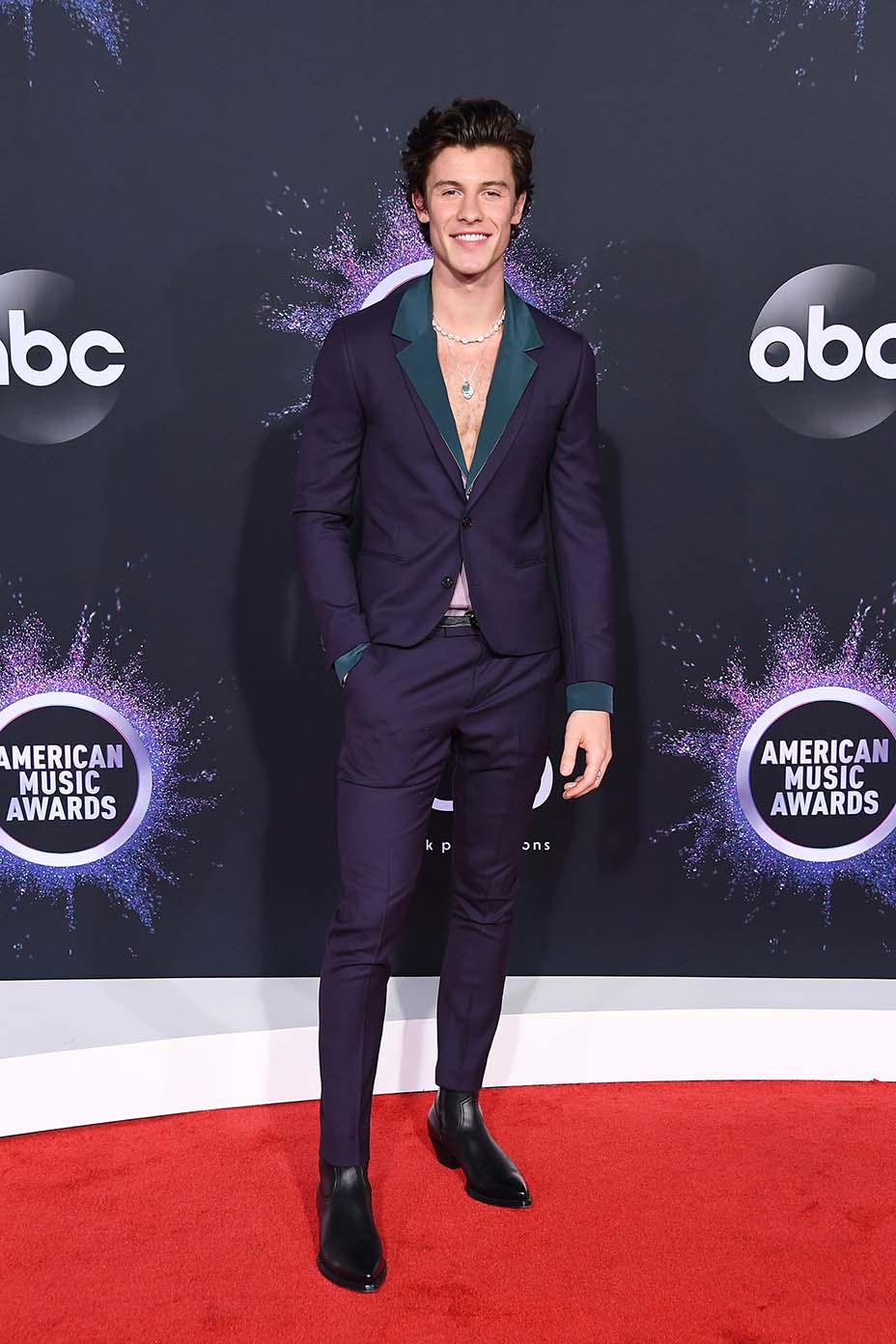 Mendes dared to experiment beyond a black tux for the ceremony, wearing a deep purple Paul Smith suit with teal lapels. His V-neck showed off his layered boho necklaces — but he was indeed wearing a shirt, a custom pink piece by Marcell von Berlin. 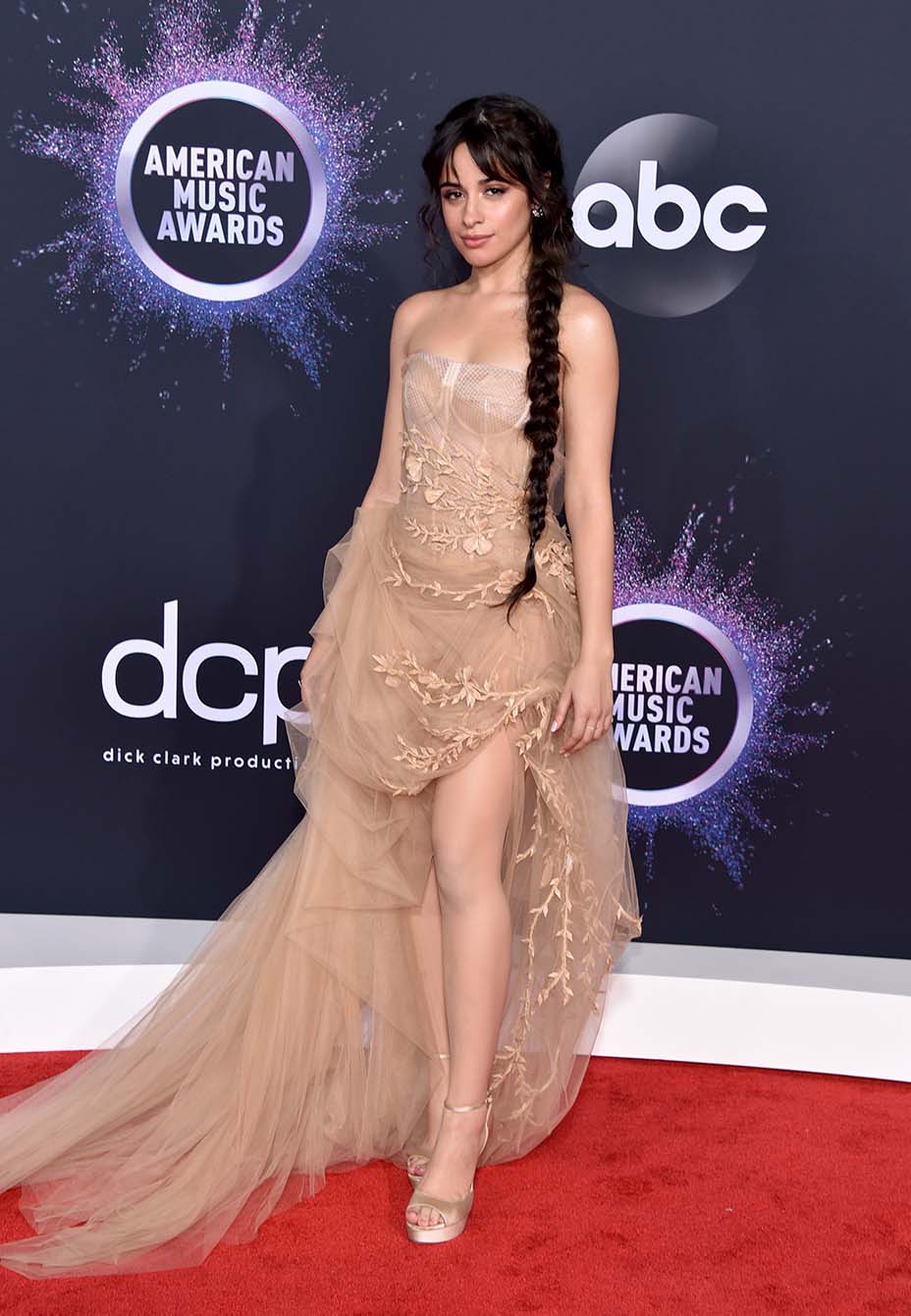 The “Senorita” singer went with a nude color palette in an Oscar de la Renta dress that the fashion house describes as “ethereal eveningwear,” featuring tulle embroidered with raffia. 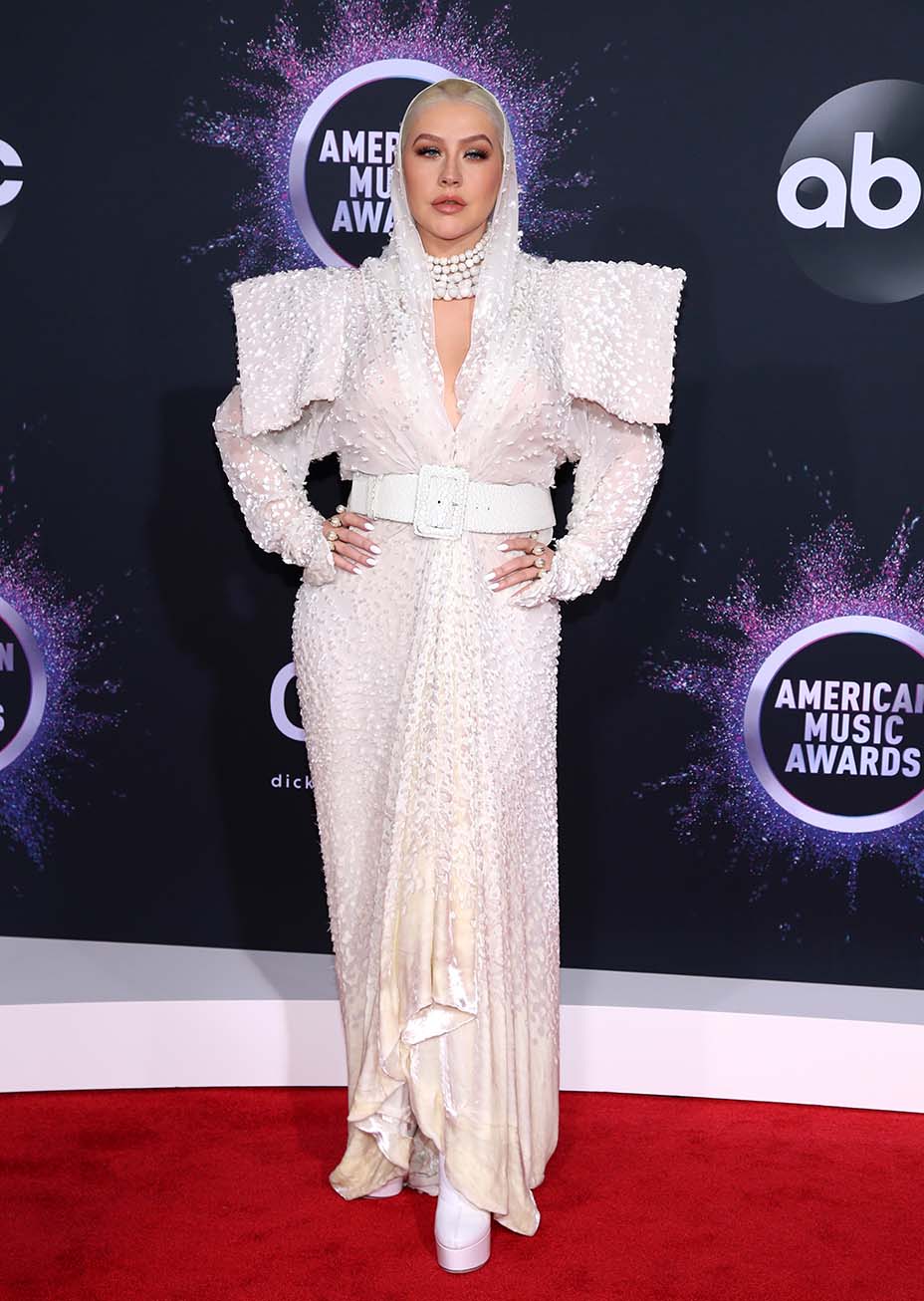 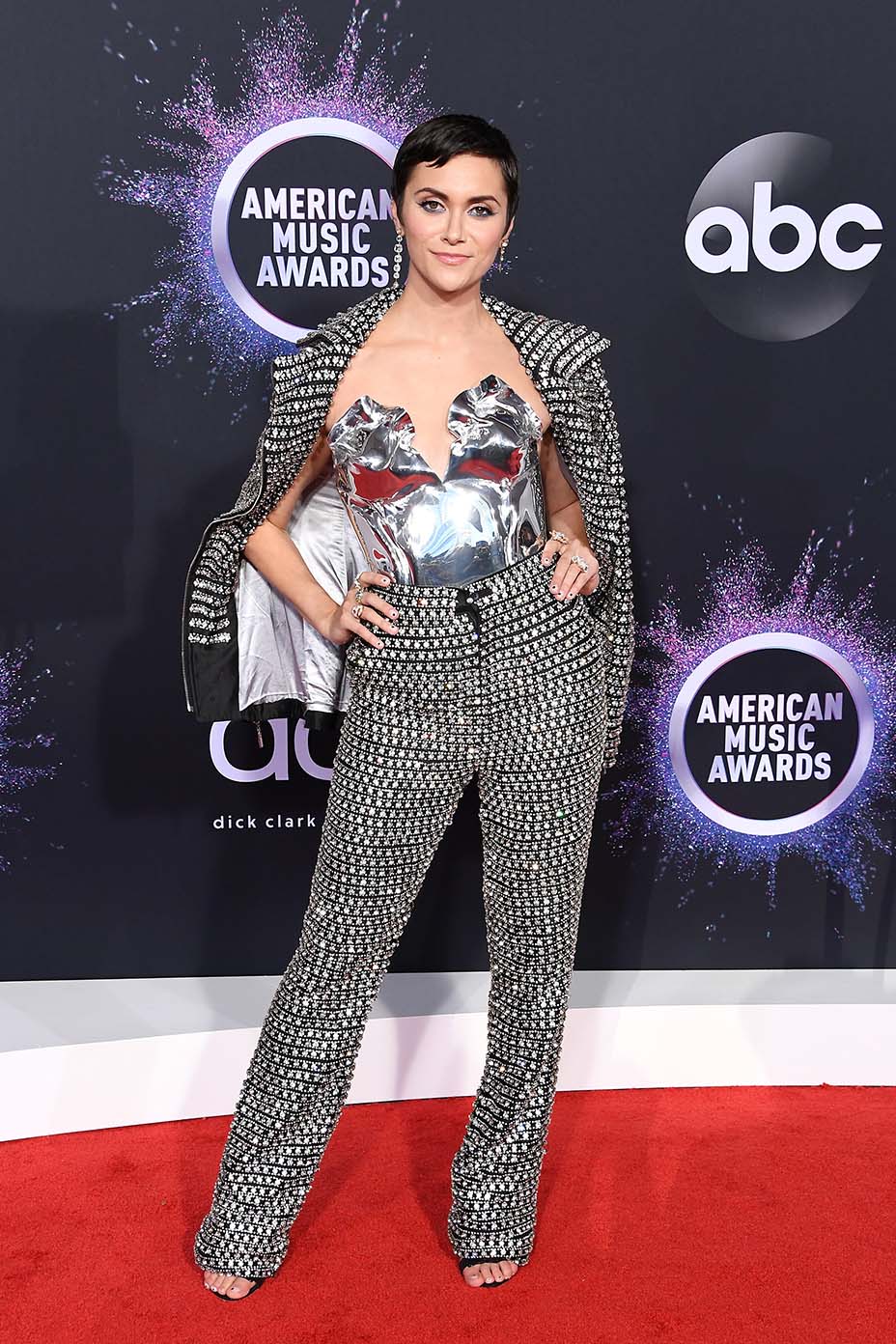 The dancer and actor dazzled in one of the night’s most expensive ensembles — a $2.4 million suit by Malan Breton decked out in Swarovski crystals (it took six months to stitch each gemstone into the silk). Under the spring/summer 2020 suit, which was inspired by the ballet Giselle, Stoner wore a metallic top by stylist Graham Cruz. 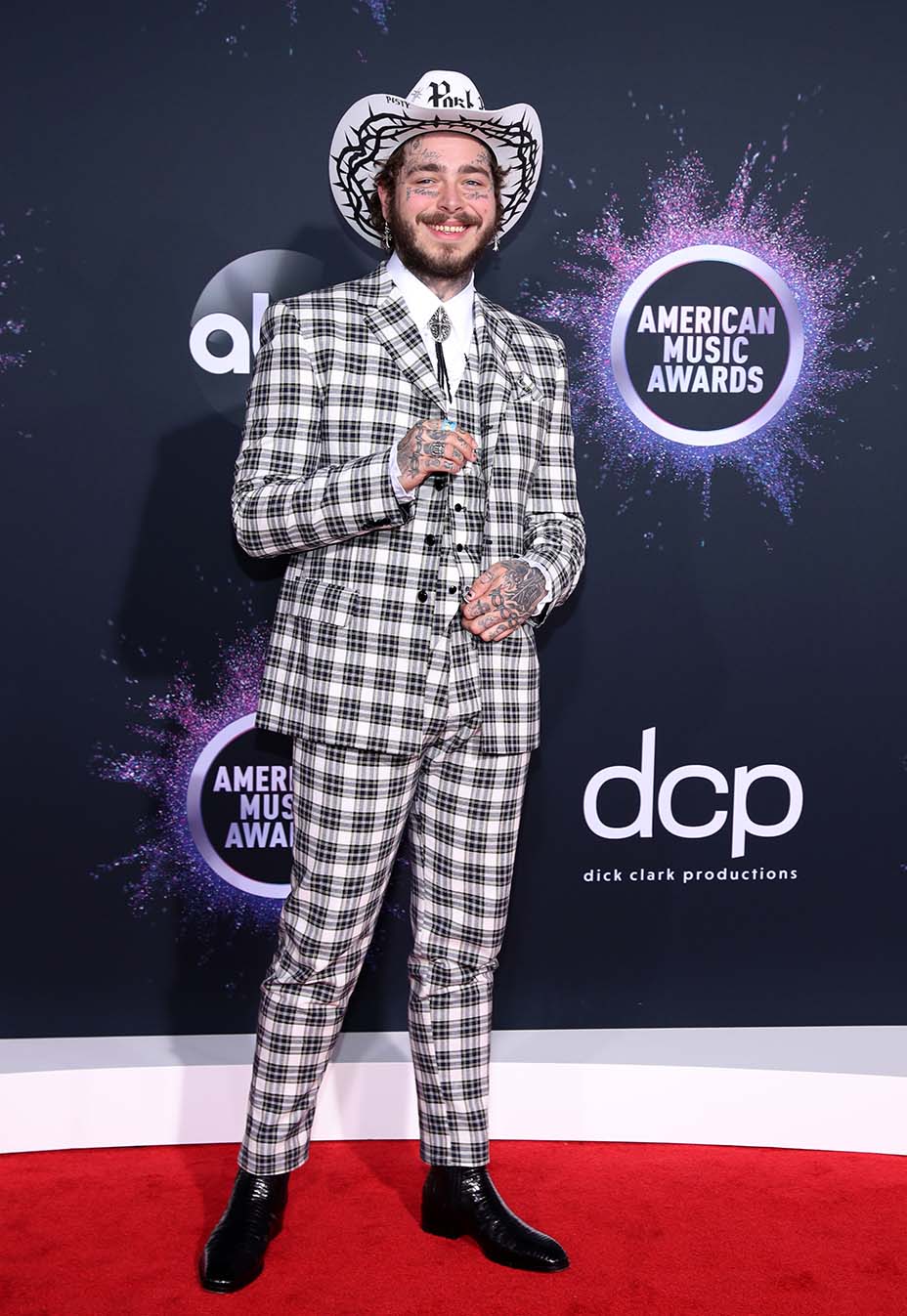 Malone paired his cowboy hat with a checked suit for an eye-catching look, styled by Catherine Hahn. 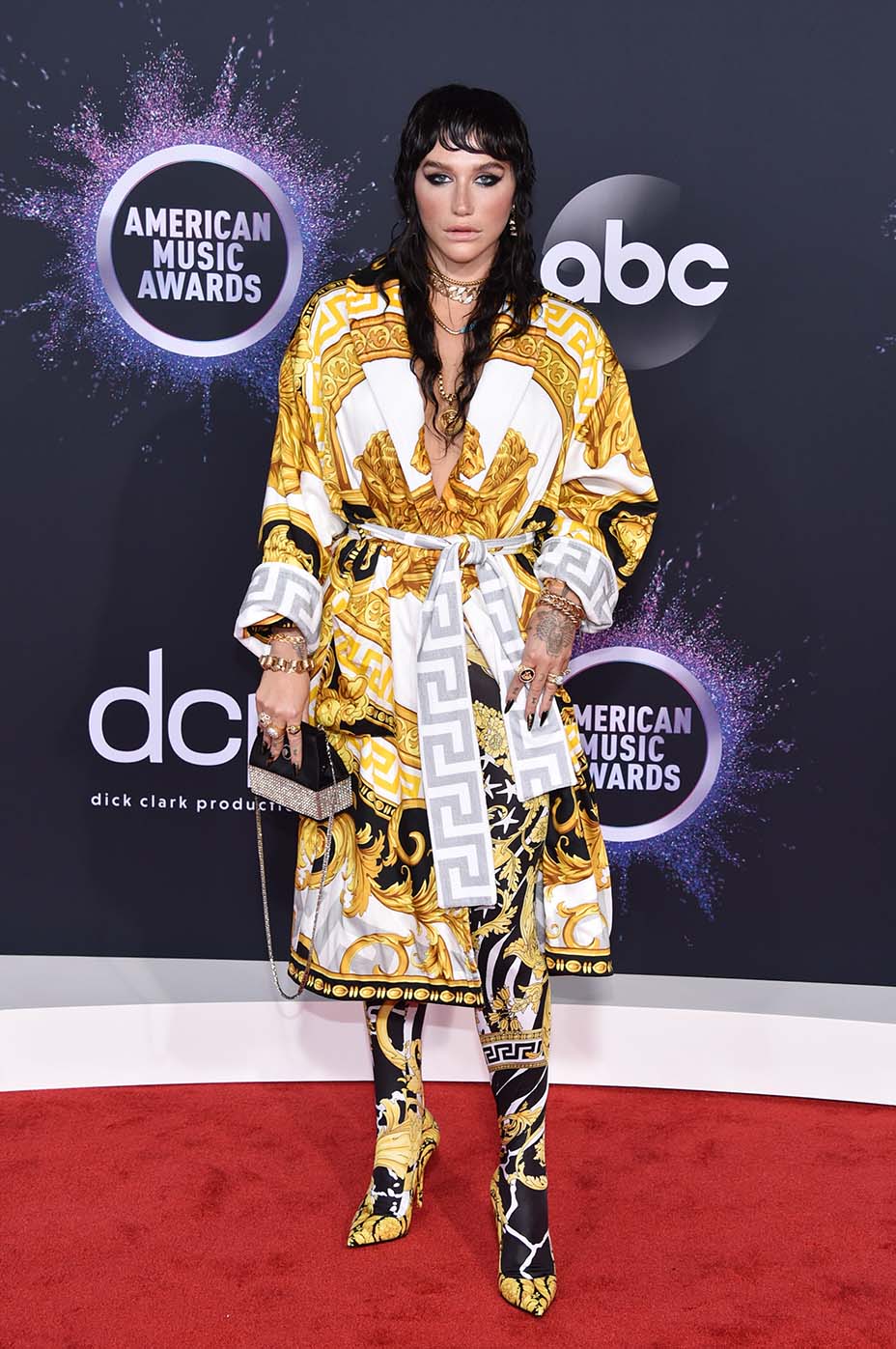 Kesha was all-out in Versace at the AMAs ahead of the December launch of her Kesha Rose Beauty. She showed off Hearts on Fire’s Behati Say It Your Way oval diamond ring, totaling 4.69 carats, and Erica Courtney’s bracelet ring with a 2.97-carat Csarite stone.

Dick Clark Productions, which produces the American Music Awards, is a division of Valence Media, which owns The Hollywood Reporter.