One week after Childish Gambino and Ariana Grande rocked the desert for consecutive weekends at Coachella, an entirely different set of music lovers will flock south for the Back to the Beach Festival at Huntington State Beach.

Offering two days of ska and punk music, the waterside fest is a laid-back bit of counter-programming to the sun-drenched behemoth that is the Coachella Music and Arts Festival. Produced by music producer and Goldfinger frontman John Feldmann, Travis Barker and Synergy Global Entertainment founder John Reese, Back to the Beach’s second outing boasts a who’s who lineup of ska and punk mainstays such as Reel Big Fish, Less Than Jake, Streetlight Manifesto, The Aquabats, Save Ferris, Goldfinger and Blink-182.

“I think that culturally, people are just freaking out because of social media and pressure and Donald Trump and I think we just needed something fun and joyful to put out there in the world,” Feldmann tells The Hollywood Reporter. “That’s really what this festival signifies.”

The idea for the festival came to Feldmann while backstage with Goldfinger when the band was touring with punk veterans NOFX. “I was sitting in the dressing room with John Reese and we started thinking about let’s do a really fun, upbeat, positive ska-reggae festival,” he says.

Feldmann, at the time, was working with Barker on Blink-182’s most recent album, 2016’s California, and thought the drummer would make a great partner for this new venture. “I called him up the next day and he was in and the three of us started this thing together,” Feldmann says of contacting Barker. “Between a thought that I had and making it come true was like a week. It was incredible.”

“Reese said he has this location on the beach and we all started throwing around names and ideas and just basically executed it,” explains Barker. 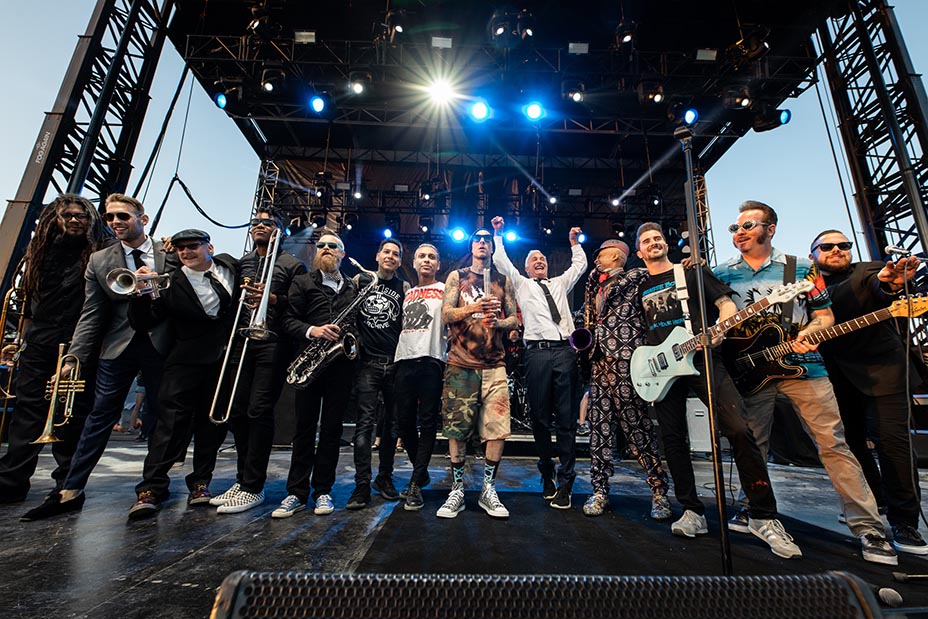 The inaugural Back to the Beach festival launched last year, co-produced by Barker and Feldmann along with Los Angeles alternative radio station KROQ, and featured acts such as Sublime With Rome, 311, The Mighty Mighty Bosstones and Fishbone.

“Last year I was walking around backstage and all day so many people came up to me and thanked me for doing this,” says Feldmann. “I talked to maybe 75 bandmembers and everyone had the same idea: thank God this show exists.”

Securing talent for the fest comes a bit easier when musicians and producers with as much experience as Feldmann and Barker are the ones making the call.

“It’s just: here’s who’s playing,” Feldmann says of his pitch, before adding with a laugh, “And, also, you owe me. For the most part, people are super pumped to play this thing.”

Barker sees not only the bands on the ticket (which he curates) as main draws, but also the festival’s location. “It’s a destination festival in the same sense Coachella is, but once you get there, it’s like, what is it? Is it the Fyre Festival with people miserable or is it done right? We have a kid zone, we have huge sand castles made of some of the bands’ imagery. We just really try to go all out,” he says.

For Feldmann, he sees Back to the Beach as a festival that is not only limited to Southern California. “I want to take this thing everywhere. Anywhere there’s a body of water I think we can make this thing happen,” he says.

Back to the Beach runs April 27-28 at Huntington State Beach in Southern California.