At the Billboard Music Awards in Las Vegas on Wednesday, Madonna continued the kickoff of a new chapter in her career with her first live performance (alongside Colombian singer Maluma) of “Medellin,” from her forthcoming Madame X album, set to release June 14.

No surprise that there were plenty of bells and whistles, including computer-generated images of herself in the chameleon-like range of styles from her new fashion-forward video of the first track from her 14th studio album that dropped last Wednesday at a world premiere hosted by MTV. 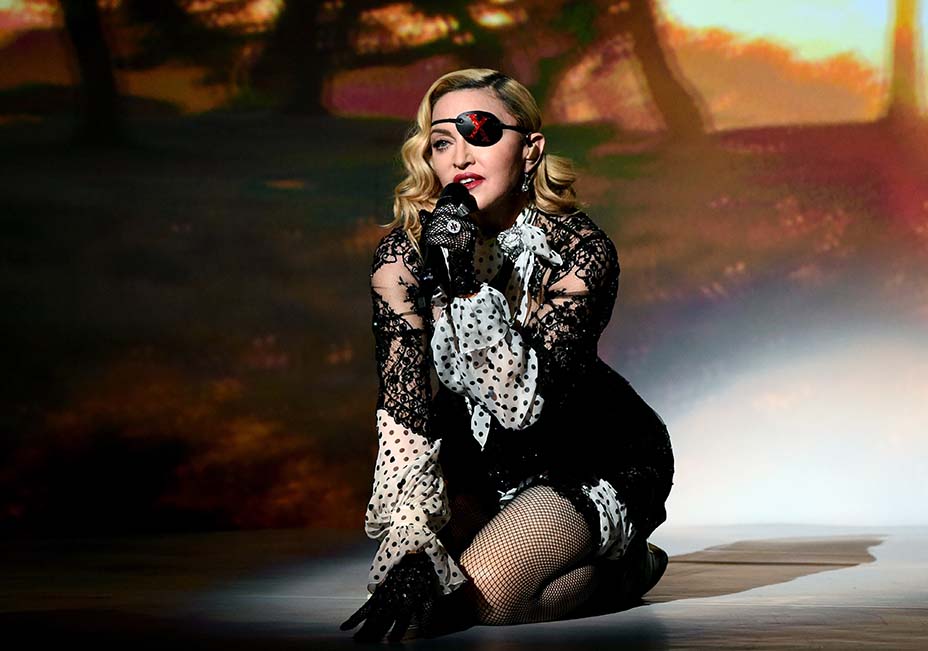 Stylist and i-D fashion editor Ib Kamara, with Eyob Yohannes on board as styling consultant, created the look that taps into Madonna’s alter ego “Madame X,” a name given to her at age 19 by Martha Graham of the famed contemporary dance studio in New York.

Graham was known for wearing gloves, and Madonna repeated them throughout her video, as she did at the BBMAs, donning black fishnet gloves with bold “M” and “X” diamond knuckle rings worn over the top, paired with a flouncy black-and-white polka-dot and glittery black lace Erdem dress. Her Art Deco platinum and diamond drop earrings were from Gioielleria Pennisi.

Front and center was her new trademark Madame X fashion accessory — a style-wise black leather pirate eye patch with a red X made of Swarovski crystals by Gregory Kara, who made a series of eye patches for the video and pre-drop interview (also in solid black, solid red and white embellished with custom safety pins by Gareth Wrighton). There is also a branded version sold with Madonna’s tour merchandise that lets fans imitate the trend.

All the Wow Fashion Moments in Madonna's New "Medellin" Video

The Billboard Music Awards is produced by Dick Clark Productions — a division of Valence Media, the parent company of the Billboard-Hollywood Reporter Media Group.