Post Malone was the top winner and Billie Eilish, Lizzo and Lil Nas X also took home key trophies at the 2020 Billboard Music Awards, which were highlighted by a slew of performances and artists who advocated for viewers to use their own voices for change in this election year.

It also featured an emotional moment from John Legend, who paid tribute to wife Chrissy Teigen; the couple lost their newborn baby Jack a few weeks ago.

Post Malone won a total of nine awards, including top artist, which is the biggest award of the night. He thanked his fans and noted how he’s grateful for “being able to reach out and show everybody they’re not alone and that music can bring everybody together.”

Earlier, he accepted the award for top male artist, ending that speech by urging viewers at home to “stay strong and spread love everywhere you go.”

Eilish took home the first award on Wednesday night, for top Billboard 200 album, for her multiple-Grammy-winning debut album, When We All Fall Asleep, Where Do We Go? During her speech, she noted that she doesn’t take any of her numerous awards for granted. She also was named top female artist moments later; she accepted both awards wearing a face mask and urged those at home to wear their own masks and wash their hands amid the coronavirus pandemic.

“I’ve been thinking a lot about suppression and the voices the refused to be suppressed. I wonder would I be standing here by now if it weren’t for the big, Black women who refused to have their voices be suppressed?” she said in her acceptance speech.

“If you’re at home watching this and you’re thinking about changing yourself to feel worthy, this your sign to remain true to who you are,” she told viewers at home. “When people try to suppress something, it’s normally because that thing holds power. They’re afraid of your power. There’s power in who you are. There’s power in your voice, so whether it’s through music, protest or your right to vote — use your power, use your voice, and refuse to be suppressed.”

“As I said on our new album, RTJ4, a lyric about my wife that her friends tell her, ‘He could be another Malcolm, he could be another Martin,'” he said. “She told them, I need a husband more than the world needs another martyr. I don’t have a martyr complex. First and foremost I’m your husband and I would not be here receiving this if not for your encouragement and your constant by my side,” he said, addressing his wife, Shana Render.

He also urged kids who interested in singing and dancing to pursue their dreams. “What you do is worthy,” he said. “You are artists and your goal should be to express the very reality around you in the very most beautiful or ugliest of ways that you see fit. Kids who run and dance and sing and jump … all the things they tell you don’t matter, you matter more than you know. The kids that are organizing, plotting, planning, strategizing, right there on the ground mobilizing, you are needed more than ever. I’m a culmination of all these things.” 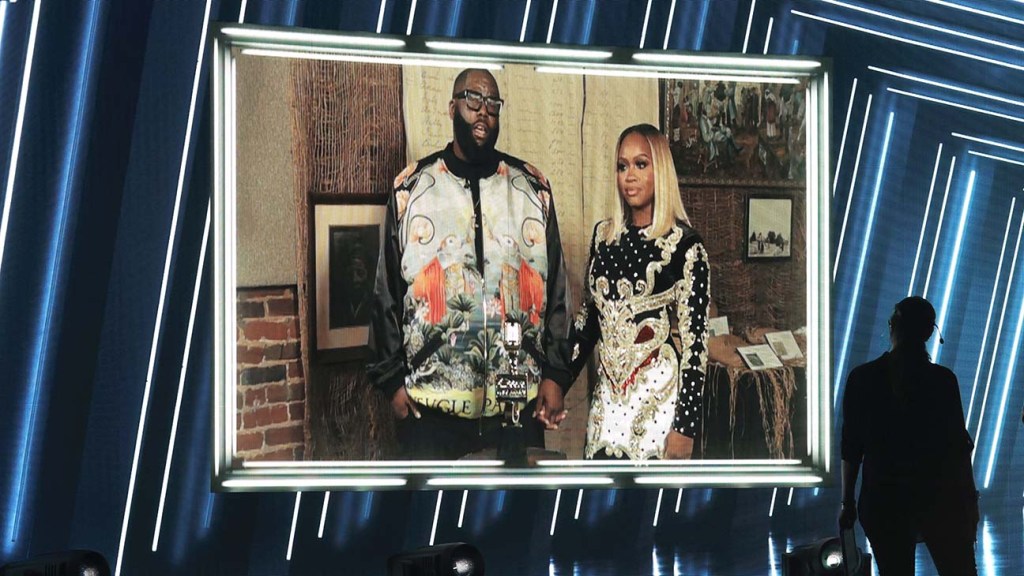 Like some of the speeches, many of the performances were aimed to inspire and motivate. Sia performed “Courage to Change,” the second single from the soundtrack of her self-directed and co-written movie Music, in her signature wig and oversized bow. The ballad, both melancholy and uplifting, focuses on while it is hard to enact change, together people “can do anything.”

Legend brought an emotional moment to the show when he dedicated his performance of “Never Break” to wife Teigen, who revealed weeks earlier that she’d had a miscarriage. “This is for Chrissy,” he whispered before singing.

And BBMA host Kelly Clarkson kicked off the show with a performance of Steve Winwood’s “Higher Love,” featuring Pentatonix and Sheila E.

Later on, Demi Lovato took on President Trump, singing her new — very political — song, “Commander in Chief.” The song’s lyrics include: “Commander in Chief, honestly. If I did the things you do, I couldn’t sleep. Seriously, do you even know the truth? We’re in a state of crisis, people are dying. While you line your pockets deep.”

Elsewhere, Garth Brooks received the Icon Award, presented by Cher. Brooks — the No. 1-selling solo artist in U.S. history — thanked his wife, Trisha Yearwood, his kids and his fans in accepting the award.

Brooks also performed a medley of his hits, including “The Thunder Rolls,” “Callin’ Baton Rouge,” “The River,” “Standing Outside the Fire,” “That Summer,” “Dive Bar,” “Friends in Low Places” and “The Dance.” 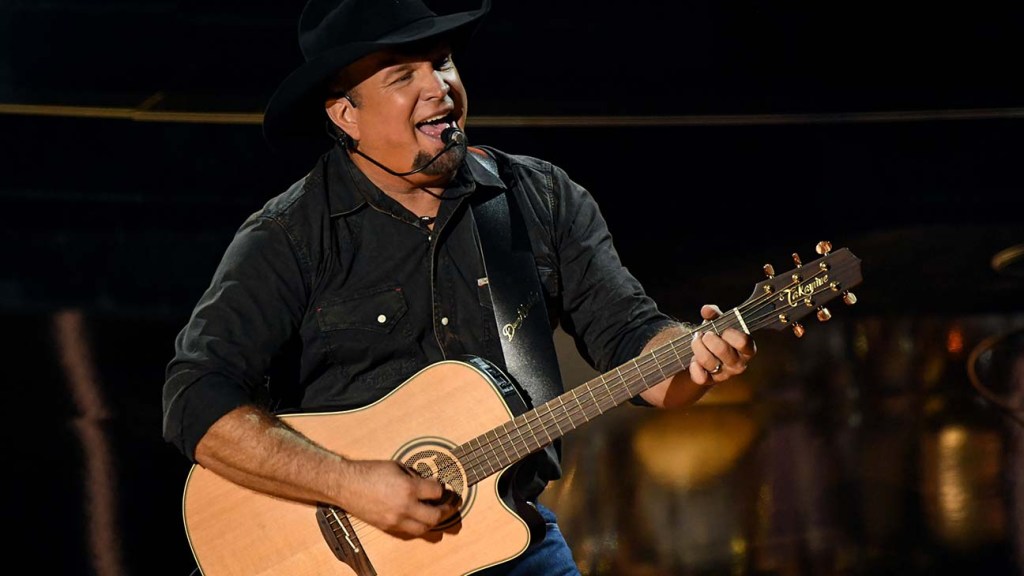 Meanwhile, other performers included Kane Brown with “Be Like That” featuring Swae Lee & Khalid, Alicia Keys with “Love Looks Better,” Combs with “Better Together,” Post Malone with “Circles” and “Tommy Lee” featuring Tyla Yaweh. Brandy hit the stage alongside Ty Dolla $ign to perform “Borderline,” “No Tomorrow” and “Almost Doesn’t Count,” while Doja Cat performed “Juicy,” “Say So” and “Like That,” and SAINt JHN performed “Roses.” BTS performed “Dynamite.”

The show also paid tribute to music icons who’ve died in the past year, including Juice WRLD, Kenny Rogers and Eddie Van Halen, who died last week after a battle with cancer. The show played a clip of Van Halen performing the hit “Panama” followed by a single shot of a guitar in a spotlight.

The ceremony ended with an energetic performance by En Vogue of their ’90s hit “Free Your Mind,” as part of a celebration of the R&B group’s 3oth anniversary.

The BBMAs aired live on NBC from the Dolby Theatre in Los Angeles. While the performers and presenters were mostly there in person (a few were not, like Post Malone, who performed from an undisclosed location, and BTS, who performed from South Korea), there was no live audience due to the pandemic. Clarkson at one point joked that she had a special device that would play cheers and other audience reactions as needed at the push of a button. 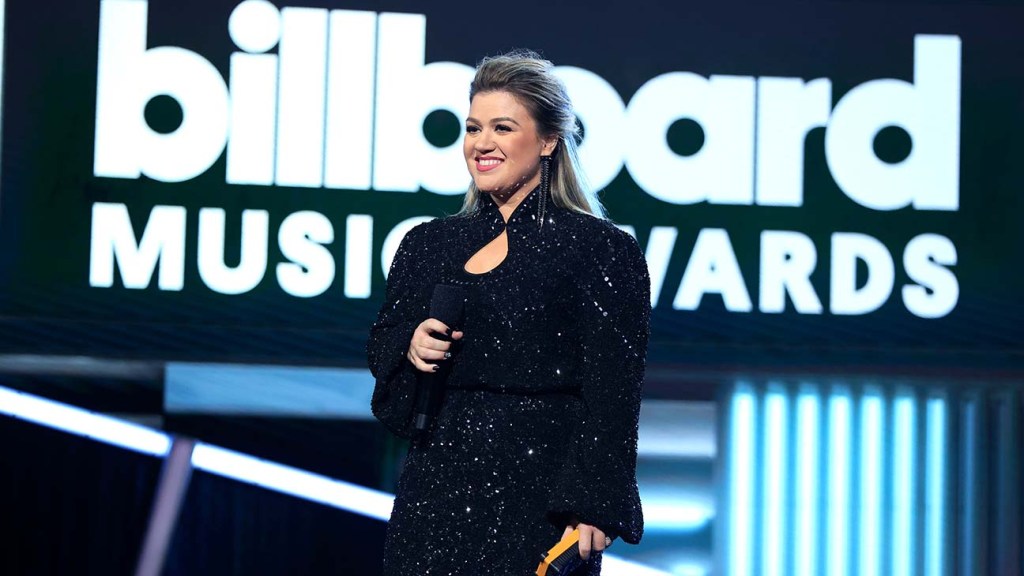 The show was rescheduled from its original date of April 29 due to the pandemic, but the awards are based on the original eligibility period of March 23, 2019, through March 14, 2020. This eligibility period remains intact “intact to recognize and honor the chart-topping artists and musical successes achieved and to maintain consistent tracking periods for future shows.” (The show is produced by Dick Clark Productions, which shares a parent company with The Hollywood Reporter.)

A full list of winners, including those not handed out during the broadcast, follows.

Top Country Album:
Luke Combs “What You See Is What You Get” (WINNER)
Kane Brown “Experiment”
Maren Morris “GIRL”
Thomas Rhett “Center Point Road”
Morgan Wallen “If I Know Me”