As temperatures began to rise on the East Coast over the weekend, South Korean supergroup BTS packed an extra punch of heat when they touched down in East Rutherford, New Jersey, for the final shows of the U.S. leg of their Love Yourself: Speak Yourself stadium world tour.

Even before their first of two sold-out concerts at MetLife Stadium kicked off Saturday night, the crowd was fired up thanks to jumbotrons playing BTS’ entire videography as an appetizer to the main event. Around 7:20 p.m., 10 minutes before the handsome septet hit the stage, the video for their 2016 hit “Fire” invited fans to jump from their seats and move along to the song and chant its mostly Korean lyrics in a resounding singalong. In no time, it seemed as if the entire venue — which hosted roughly 60,000 people for the event — started shaking. “Wait, this feels like an earthquake,” one delightfully shocked attendee in section 113 said.

This expression of excitement — a forceful reverberation of a sturdy steel structure that spans 50 kilometers in length — was quite remarkable, especially given the fact BTS’ nearly three-hour spectacle hadn’t even yet commenced. But that’s the power of the K-pop boy band’s ARMY, the official name of their deeply loyal fandom whose intensity is arguably unmatched when compared to other fan bases. Proving their devotion, many concertgoers on Saturday said that they also purchased tickets — which sold for hundreds of dollars apiece — to Sunday night’s show.

But judging from the bright smiles and ear-shattering screams that filled the stadium once the lights went down to signal BTS’ arrival, it was obvious that seeing the Seoul-based band perform live is a priceless experience for many. Following minutes of anticipation, a duo of giant, mirrored jaguar statues appeared onstage and eventually rose to reveal what seemed to be about 30 male backup dancers. As the opening chords of BTS’ “Dionysus” — their party anthem named after the Greek god of wine — boomed over the speakers, the dancers scattered away to uncover members RM, J-Hope, Suga, Jin, Jimin, V and Jungkook flanked by a circle of flames.

After breaking free from their starting positions, BTS traversed across set pieces that aptly included Greek pillars and a marble table reminiscent of The Last Supper. The band — dressed in coordinated white ensembles — gave reason to worship as they served up impossibly tight choreography paired with heavenly vocals. It only seemed fitting that the K-pop kings ended their opening number seated in seven thrones.

The talented young men continued to command the stage as they transitioned into “Not Today,” which also included an extravagant light display and frequent bursts of fireworks. (A combination of holographic imagery, pyrotechnics, streamers, confetti, bubbles and waterworks would be employed during almost every song.) Prior to singing “Wings,” the next track in their robust set, the band took a breather to check in with the audience — their first of many chats with fans throughout the night. “Look at this stadium. You made this, ARMY. We love you. We came for you,” V said as he reveled in the view of the tens of thousands of fans who came out to support him and his bandmates.

“It feels like we’re flying. We will fly to you with the wings you gave us,” Jungkook added with a wink and a tilt of his head, undoubtedly aware of how cheesy his on-the-nose introduction of “Wings” was.

But the youngest member of the group — who, at 21, holds the coveted “maknae” title — wasn’t kidding about that aviation part. Later in the show, halfway through an energetic performance of his solo track, “Euphoria,” a pink denim-clad Jungkook literally took flight. Offering one of the concert’s most exhilarating moments, he fearlessly glided across the stadium on a zip line, all while maintaining a crystal-clear falsetto for the vocally challenging song.

Each member had a chance to shine on his own at the concert, which served as a prism reflecting the distinctly different attitudes that BTS is comprised of. J-Hope became an irrepressible disco prince for “Just Dance”; Jimin, a former modern dance student, showed off his technique for a sensual rendition of “Serendipity”; RM embodied a hip-hop cupid for “Love”; Suga channeled Hugh Hefner in sparkly red suit pajamas for the smooth “Seesaw”; Jin showed he’s a capable piano player with his impactful ballad “Epiphany”; and V made hearts race as he writhed around a floating bed for his breathy slow jam, “Singularity.” 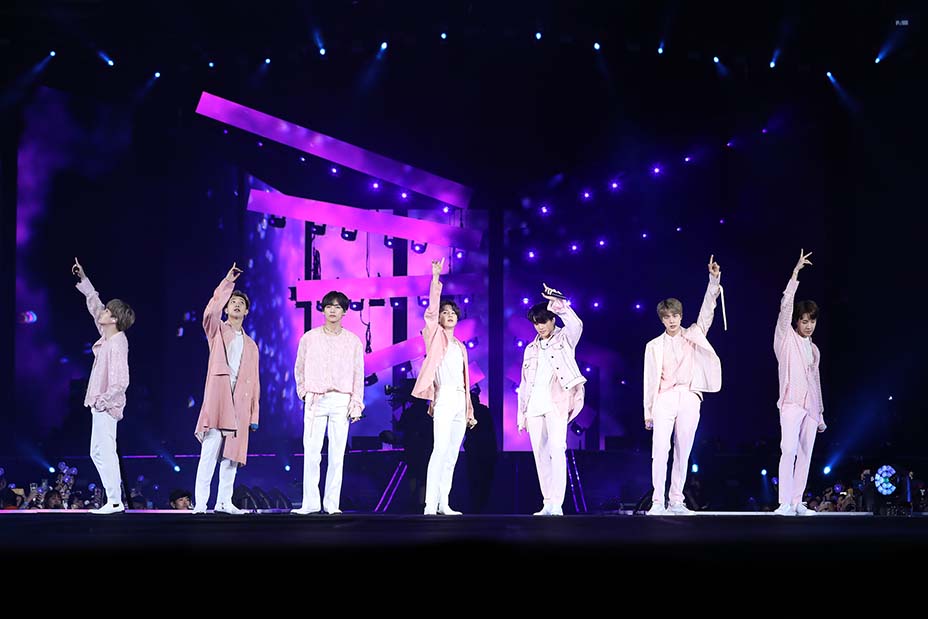 Somewhere in the middle of all this, the guys reconvened to perform their latest hit, “Boy With Luv,” the lead single from BTS’ record-breaking album Map of the Soul: Persona. (The album, released April 12, marked their third consecutive No. 1 debut on the Billboard 200 chart in just 11 months, making BTS the only group to achieve that feat since The Beatles.) For “Boy With Luv” — which features vocals from American chart-topper Halsey — BTS flawlessly executed moves made famous in the song’s accompanying music video, as fans attempted to match them from their seats. The same went for BTS’ performances of their other hits with choreography-heavy visuals, including the bass-thumping “Idol,” the moody “Fake Love” and the rock-tinged “Mic Drop.”

Before the final section of their show — for which BTS wore pieces from their own line of merch — the group launched into one more address to their beloved ARMY, encouraged by frontman RM, who wanted to hear his bandmates “say how we really feel tonight.”

“I want to thank you guys for coming out tonight. Work and school gives us a lot of stress. I hope this was a stress relief for you guys tonight,” Jin said through a translator, before joking, “Screaming is the best for stress relieving!” Not surprisingly, this caused the crowd to erupt in yet another round of deafening cheers and applause.

Jungkook said that playing the venue was a “dream come true.” He elaborated, “When I came to MetLife Stadium, I wanted to be with you guys. I imagined being with you. This was beyond amazing. This performance was possible due to your love and support. Thank you so much. I love you.”

For his part, RM gave thought to the five-year journey that the boys of BTS have taken from their days as a relatively unknown act in the U.S. to cementing themselves as global icons. “This is truly the most beautiful stadium that we’ve ever seen. Back in the day, five years ago in 2014, we were on Broadway in a small hall and we couldn’t do the encore because of some reasons,” he recounted. “And I still remember it. At that time, we were truly nothing and nobody noticed us.”

Continued RM, “But they use this phrase a lot: ‘From nothing to something.’ And tonight, I truly realize that we did become something. That’s just because you guys became our something.”

After taking a selfie with the crowd, BTS closed out the night with a back-to-back performance of their Ed Sheeran-penned single, “Make It Right” — which they dedicated to their ARMY — and the solar system-inspired “Mikrokosmos,” for which a larger-than-life, glittering orb ascended into the air — the perfect centerpiece for a stadium that was already aglow with a sea of iPhone flashlights and $60 BTS-branded light sticks. 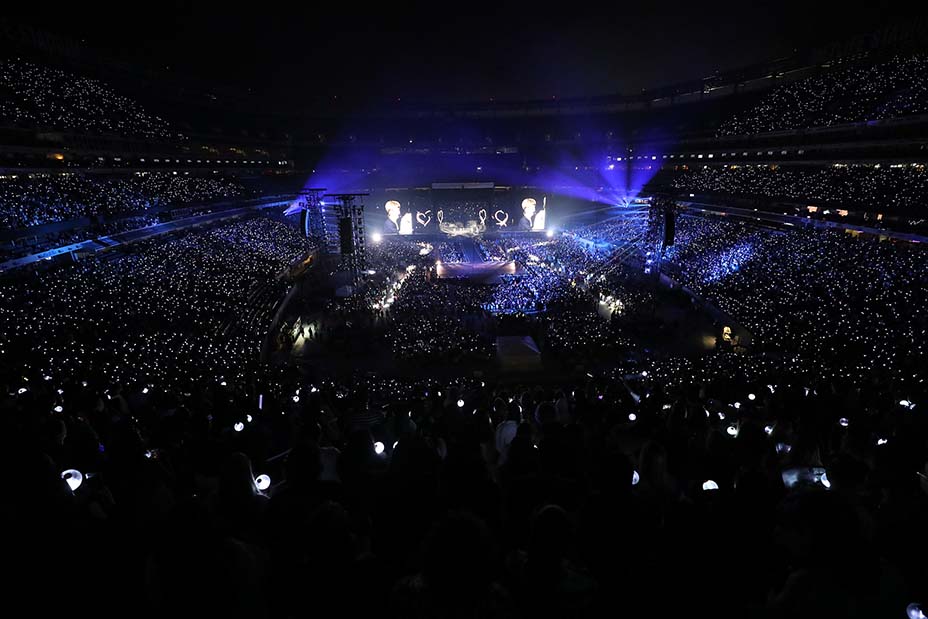 Expressing their gratitude until the very last second of the show, BTS’ Jimin admitted that he “[didn’t] want to go home” after a “very, very beautiful concert” at MetLife, with J-Hope echoing: “A beautiful concert! ARMY, you are beautiful.”

BTS then took a few more photos with the audience and led them in a chorus of “na-na-nas” as the instrumental for “Mikrokosmos” continued to play and copious amounts of confetti shot out of cannons. Though the group hails from the other side of the world — and several of its members aren’t fluent in English — the love shared between BTS and their tri-state area ARMY was certainly not lost in translation.

“You are the stars and the lighthouse that lead us in the night,” RM explained. And with that, BTS finally bid farewell.

The band — who made history last year as the first K-pop act to ever host and sell out a stadium show in the U.S. at New York’s Citi Field — will continue on with their Love Yourself: Speak Yourself stadium world tour on May 25 in Brazil at Sao Paulo’s Allianz Parque.