Day 2 of Coachella brought plenty of surprises and a bit more heat (literally, temperatures reached 93 degrees at the Empire Polo Club in Indio, Calif.), not that you could tell from the festival fashion.

The ice queens of the daytime parties
Sweat stains be damned, celebrities arrived at Saturday’s daytime pool parties in long-sleeve ensembles (in Solange’s case, a one-shoulder, long-sleeve Solace London top at the Levi’s bash). Kendall Jenner, rocking a matching pants-and-coat ensemble with silver sequin sleeves, cooled off inside the Bumble Land igloo, which was stocked with furniture made of real ice. Kendall and little sis Kylie co-hosted the snow-in-the-desert themed event, where they were accompanied by an entourage of no less than five security guards who prevented partygoers from snapping photos (but isn’t that the point?) and, according to TMZ, asking Kendall anything about that Pepsi ad.

Gucci, Mugler and a life jacket onstage
The biggest news of the night, of course, was the performers. Like her partygoing pals, Lady Gaga was also seemingly impervious to the heat, stepping onto the stage at 11:30 p.m. in a thick Mugler leather coat cinched by a belt with a glowing buckle that made the whole thing reminiscent of a superhero’s ensemble. Throughout the performance, during which she debuted her new single, “The Cure,” she swapped the coat first for a hip-length denim jacket dotted with colorful sequin patches, and then for a cropped red hoodie with her own face on it. (Gaga for Gaga.)

Future also made a splash, with the rapper bringing the uber stylish trio Migos out for a guest set, followed by yet another surprise guest: Drake. The Migos crew was decked out in Gucci, Louis Vuitton and floral embroidery. 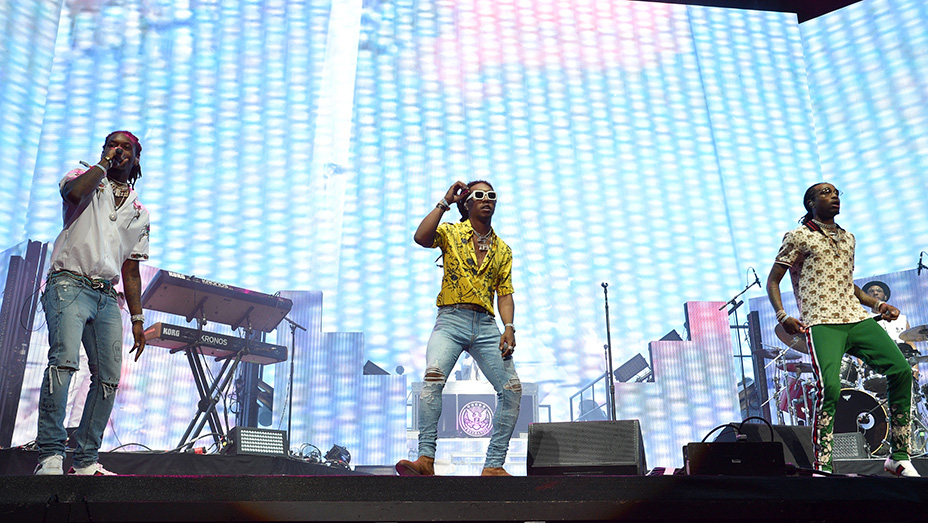 Drake, on the other hand, stepped out in a look that could’ve been straight out of his notorious “Hotline Bling” video. The rapper, who caused pandemonium in the crowd when he hit the stage, was hard to miss in a puffy yellow vest that could have doubled as a life jacket.

The pleasant surprises
On the polo fields, too, heat didn’t seem to be a factor, as turtlenecks and fur-lined jackets were spotted toward the later hours of the day.

One festivalgoer, Russell from Sacramento, stood out in the sea of Gucci denim jackets and neon tees. Wearing a leather turtleneck and khaki box-pleat trousers, skinny rose-colored sunglasses and socks reading “Gangsta” with Birkenstocks, Russell was a rather refreshing sight.

And you know that people are having a good time when you see the crowds parting for Amber Rose, whose bleach-blonde buzz cut was spotted cruising through the VIP section on a Segway-like scooter.

The crazy good and crazy bad
From the good (a man in a silver sequin shirt leading a parade of shirtless men to the front of the Lady Gaga crowd) to the bad (more women wearing Native American headdresses — five more, to be exact), the festival grounds were once again a motley mix of fashions.

Logo lingerie, including bras with thick straps bearing labels like Dior, Moschino and Opening Ceremony, were also spotted frequently among the model crowd, as were new ways of exposing one’s backside. For example, under-butt cleavage was spied in jeans with strategically placed cutouts.

The afterparty looks
The biggest afterparty of the weekend, Levi’s Neon Carnival, once again drew an A-list crowd including Selena Gomez and her Instagram-official beau, The Weeknd; Drake; Jhene Aiko; and more. The massive banger was the kind of event where you can spot in one eye a black kimono-clad Diddy arriving with an entourage of 20, and in the other Nick Jonas in a green puffer jacket huddled in a corner by a trash can scarfing down a piece of pizza by himself. (This reporter witnessed both.)