In the first of several playful ruminations that punctuate his exhilarating theatrical concert, American Utopia, David Byrne holds up a model of the human brain and ponders how the hundreds of millions of neuro connections in a baby’s gray matter get whittled down as we mature into adulthood, discarding the unnecessary and conserving only those needed to define who we are and how we perceive the world. This follows the section-by-section cerebral breakdown of the opening song, “Here.” That combined introduction serves as an implicit challenge to the audience — to rewire our brains, rendering them more elastic, capable of change and of receiving the multifarious signals of this astonishing show on different levels.

Teaming up with a crew of 11 prodigiously talented and hard-working musicians, backup singers and dancers of diverse ages and ethnicities, Byrne gathers a vibrant community onstage, over which he presides as part professor, part preacher, part partying proletarian. The sheer jubilation being transmitted by the performers, not to mention the dynamic staging, seems to demand a new kind of sensory intake. It’s less a concert than a participatory religious experience, honoring the primal pleasures of music, dance and song as collective celebration, a rite to be savored more than ever in dark times.

Hatched out of Byrne’s seventh solo studio album but anthologizing material from across his output stretching back to his days as the art-rock guru frontman of Talking Heads, the show comes to Broadway following an extensive 2018 U.S. and international tour. It’s a sensational concert by any measure, but also a highly sophisticated extension of much of what Byrne has been doing over an eclectic and influential career spanning almost five decades.

The punk/funk/new wave fusion of the Talking Heads years is amply represented along with the expeditions into electronica, zydeco, Afrobeat, Latin and other world music influences. But so, too, is the wryly curious people-watching of his 1986 film True Stories; the idiosyncratic music theory of his 2012 book How Music Works; the synchronized movement and drumlines of his involvement with color guards; the self-explanatory credo of his “Reasons to Be Cheerful” talks; and the flair for shaping a theatrical narrative honed in his 2013 immersive dance musical about Imelda Marcos, Here Lies Love. 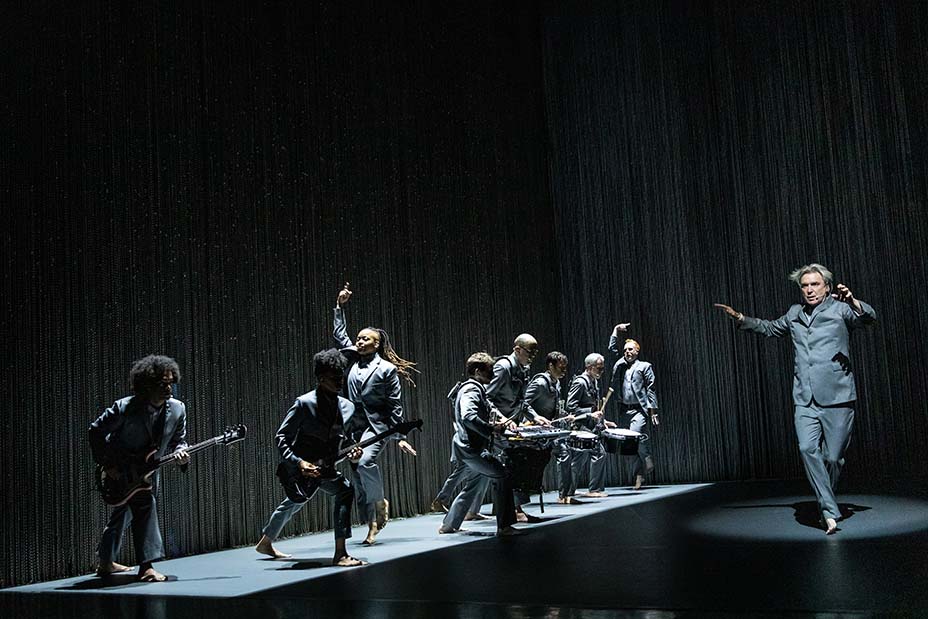 There’s no story as such, but there’s definitely an overarching statement about enduring openness, optimism and faith in humanity, even in a troubled world, that’s subtly threaded throughout, along with smoothly integrated political perspective. To sum it up in the title of one of the songs performed, “Everyday Is a Miracle.” Basically, that makes Byrne the cool Mr. Rogers.

It all coheres thematically near the end of the show in the gospel folk of “One Fine Day,” lifted from Byrne’s 2008 Brian Eno collaboration, Everything That Happens Will Happen Today, and given a stirring a cappella performance here by the entire company. “Everything can change,” they sing, and by that time, you believe it’s possible.

In the mock scholarly opening, Byrne sits alone on the stage as a silver chain mail curtain slowly rises into place on three sides. He’s joined first by two tireless backup singer-dancers, Chris Giarmo and Tendayi Kuumba, who whirl and prance around Byrne, at one point early on manipulating him like a puppet. Next comes keyboardist and co-music director Karl Mansfield, his synthesizer strapped over his shoulders on a harness. The same applies to the dazzling percussionists, Jacqueline Acevedo, Gustavo Di Dalva, Daniel Freedman, Tim Keiper, Stephane San Juan and co-music director Mauro Refosco, wielding various instruments including the assorted parts of a deconstructed drum kit.

Along with Angie Swan on guitar and Bobby Wooten III on bass, the entire troupe is “untethered,” to use Byrne’s word. They move freely around the stage, forming lines or mini-clusters or communing in corroboree circles, sometimes just bouncing in place, but at all times connecting with one another and unmistakably having a blast. By bringing out the elements gradually, Byrne previews a process he later shows more straightforwardly, introducing the full company one by one on a thrilling “Born Under Punches,” demonstrating the intricate layering that goes into building a song.

The extent to which the distinctive personalities of everyone onstage emerge is remarkable in a show incontrovertibly built around a consecrated star. That’s reflected in the identical costumes worn by everyone — all of them barefoot, in gray suits and shirts. If I had to choose favorites, the buoyant moves and infectious happiness of bass player Wooten, the supremely chill poise of guitarist Swan and the wild physicality of percussionists Di Dalva, Freedman and Keiper make them a total delight to watch. But this is very much an egalitarian ensemble, stitched together not just by Byrne but also by the weaving, bobbing presences of Giarmo and Kuumba, bringing their own contrasting styles. 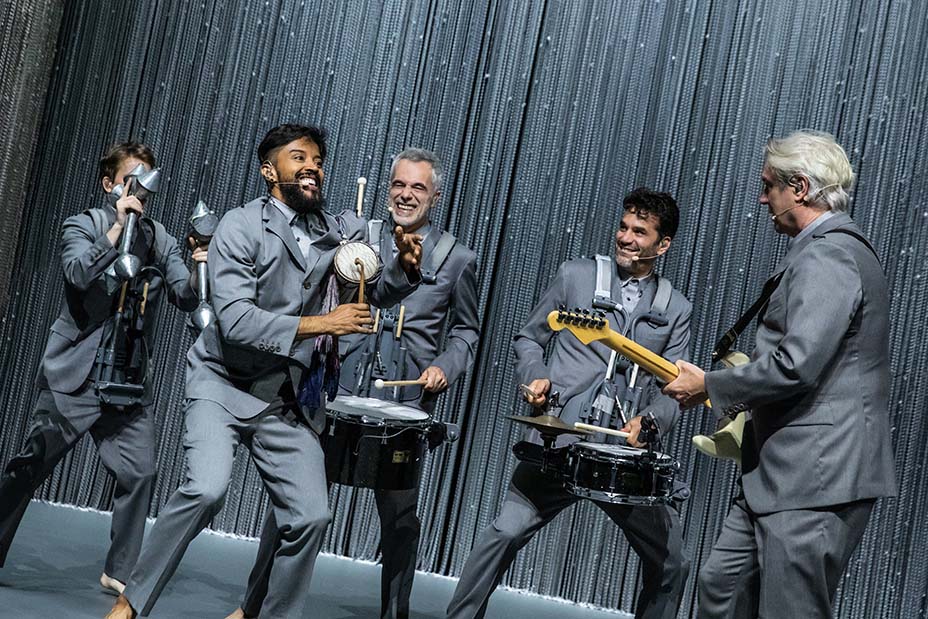 It’s appropriate that the first song to assemble the full company onstage is also the first classic Heads track, “Don’t Worry About the Government,” and while the electricity bouncing off the performers and coursing through the audience is a constant throughout the show, it peaks every time they dip into that superlative vintage catalog. Byrne’s typically quirky, clever lyrics also are a good thematic fit, about an Everyman relishing the security of family, home and job. The satirical hint behind the admiration expressed by the song’s narrator for “the laws made in Washington, D.C.” also jibes with the show’s bigger picture.

The segue from “Government” into Byrne’s 2002 collaboration with Brit house duo X-Press 2, “Lazy,” keeps cranking up the energy in a perfectly modulated set list. But the loudly appreciative response of hardcore fans to the older material conveys a special contagious rapture, notably as the jaunty opening bars of “This Must Be the Place” act like a mass mood elevator, followed by the explosively visceral tribal rhythms of “I Zimbra.” Dadaist poet Hugo Ball’s work served as the lyrics for that song, and Byrne’s droll detour into the Dada movement — an absurdist protest response to the escalating Nazi threat and the rise of fascism — again ties into the show’s seamless political messaging.

Voter turnout, climate change and the immigrant contribution are touched upon, along with gun violence, echoed early on in the “Slippery People” lyric, “Put away that gun, this part is simple,” and later in one of the American Utopia songs, “Bullet.” A cover of Janelle Monae’s “Hell You Talmbout” — with its call-and-response of “Say his name” and the roll call of innocent African American victims of racial and/or police violence stretching from Eric Garner back to Emmett Till — provides a powerful protest element, with the entire company on percussion.

Among the other Talking Heads numbers, “Once in a Lifetime” is a spectacular showstopper, beginning with Byrne staggering around the stage as if drunk on those giddy opening synth bars; and on “Burning Down the House,” he prompts the audience to get up and dance, which hammers home the prevailing spirit of a collective party, a tonic for all our ills. “Blind,” with its fat, funky grooves, has you convinced there’s an entire brass section onstage, and not just a master synthesizer programmer in Mansfield (the show uses no playback assist).

That song also reiterates the show’s nutshell ethos when Byrne explains the concept of eliminating everything from the stage except the primary interest of people, telling the audience, “That would be us and you.” It’s also there in the preshow front curtain by illustrator Maira Kalman, with its lovely depiction of the performers spreading joy across America. We even enter the theater accompanied by piped birdsong! In the hands of many entertainers, this shiny-happy element might seem cloying, but there’s such persuasive sincerity behind the ideas here that only the sourest curmudgeon could be unmoved.

At 67, Byrne remains in sonorous voice, with his signature brand of irony ranging from quizzical to oratorical. He indirectly acknowledges that before performing the American Utopia album track “Everybody’s Coming to My House,” describing how a Detroit choir interpretation made the song about welcoming inclusiveness, whereas when he sings it, the subtext is that he’s wondering when they’ll all leave. He admits, “I like their version better but, well, I am who I am.” 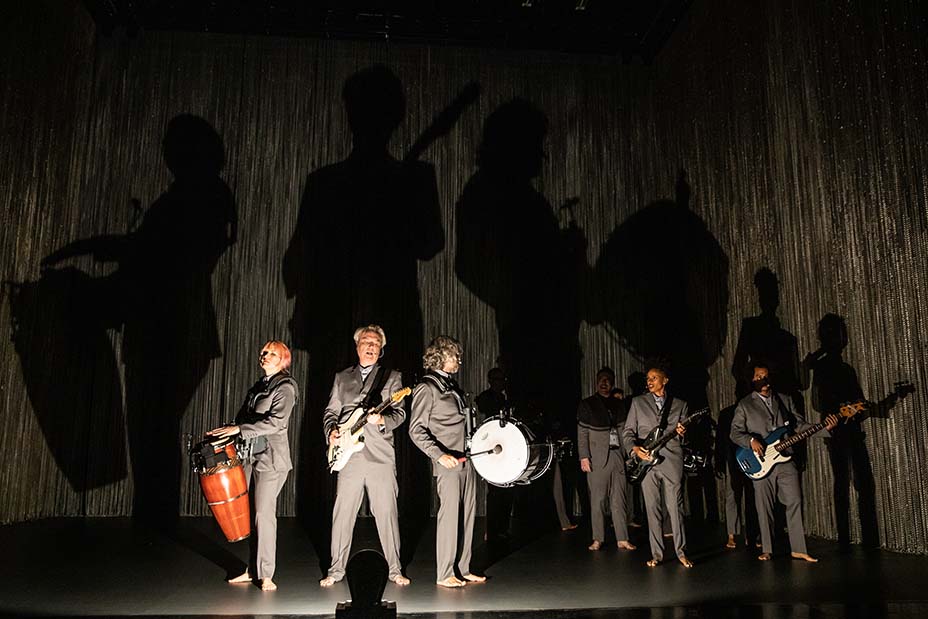 With his thick mop of silver hair and his imposing height, Byrne still commands the stage, frequently joining the musicians on guitar. And his dance moves, both alone and as part of whimsical routines with Giarmo, Kuumba and the dancing musicians, are great fun, amusingly underlined in the lyrics of another American Utopia track: “I dance like this / Because it feels so damn good / If I could dance better / Well, you know that I would.” The high spirits of that song are topped only by “Toe Jam Mix,” Byrne’s ecstatic 2008 collaboration with The Brighton Port Authority.

Annie-B Parson has come in to sharpen the choreography and musical staging for Broadway, while Alex Timbers (both were key collaborators on Here Lies Love) gets “production consultant” billing. The show is fundamentally the same as the tour production, but it’s been refined without sacrificing the hypnotic looseness and spontaneity. The dance elements range from elegant tai chi-esque moves to balletic attitudes, from frisky jigs to Bourbon Street-style processionals.

Rob Sinclair’s lighting does supple work reshaping the mood throughout, and the setting allows for some gorgeous surreal imagery reminiscent of Cocteau’s Beauty and the Beast, with disembodied hands playing instruments or passing them through the metallic curtain. For the final songs and encore (another Talking Heads gem), that curtain is effectively stripped away, exposing the bare backstage area. Pete Keppler’s sound design is optimally crystalline, essentially so for a lyricist as brilliantly original as Byrne.

Whether or not Byrne and his incredible troupe continue to perform this show post-Broadway, it’s crying out to be filmed. Hello, Netflix? HBO? The many critics and fans who suggested the tour might be the best live rock show of all time weren’t exaggerating. Even without the important component of the audience, capturing American Utopia on film has the potential to become a worthy companion piece to Stop Making Sense, Jonathan Demme’s 1984 Heads concert film, which remains the genre’s gold standard. In the meantime, I can’t recommend experiencing it live highly enough. It’s pure bliss.