Security was tight at the Yacht Club de Monaco for Duran Duran’s “Extra Ordinary World” concert (a play on the band’s 1993 hit “Ordinary World”) on Friday, with triple security checks at the entrance and two wristbands per guest — one categorizing their level of VIP status at luxury yacht builder Ferretti Group’s private event and one flashing along to the music.

“Did you get your champagne and caviar? Or is anyone hungry?!” shouted frontman Simon Le Bon from the floating pontoon concert stage as he surveyed the yacht owners seated in the Norman Foster-designed clubhouse before singing “Hungry Like the Wolf.” Two months earlier in Kentucky, Le Bon had asked the a different audience, “Did you drink your beer? Did you eat your hot dogs?!”

“I have followed Duran Duran’s career since they first started out and I’ve always loved their songs and their ability to change and experiment without ever losing their identity or inspiration,” said Ferretti Group CEO Alberto Galasso as he introduced the band, while Bernard d’Alessandri, the Secretary General of the YCM, complimented Le Bon on his participation in the Whitbread Round the World Race 1985/86, aboard the yacht Drum. Drum’s keel had fallen off in the notorious Fastnet Race 1985 the month before, with Le Bon having been trapped under the upturned hull before being rescued by a Royal Navy diver.

The set began with the hit “Notorious,” with the group arriving from a yacht, naturally, and Le Bon leaping into the spotlight in white jeans and blue leather jacket. The dance floor (a dinghy launch ramp in day-job mode) immediately below the stage was filled to capacity as the 500-plus fans shed their inhibitions (and a few, their ties) and unabashedly transformed themselves back to the ‘80s. 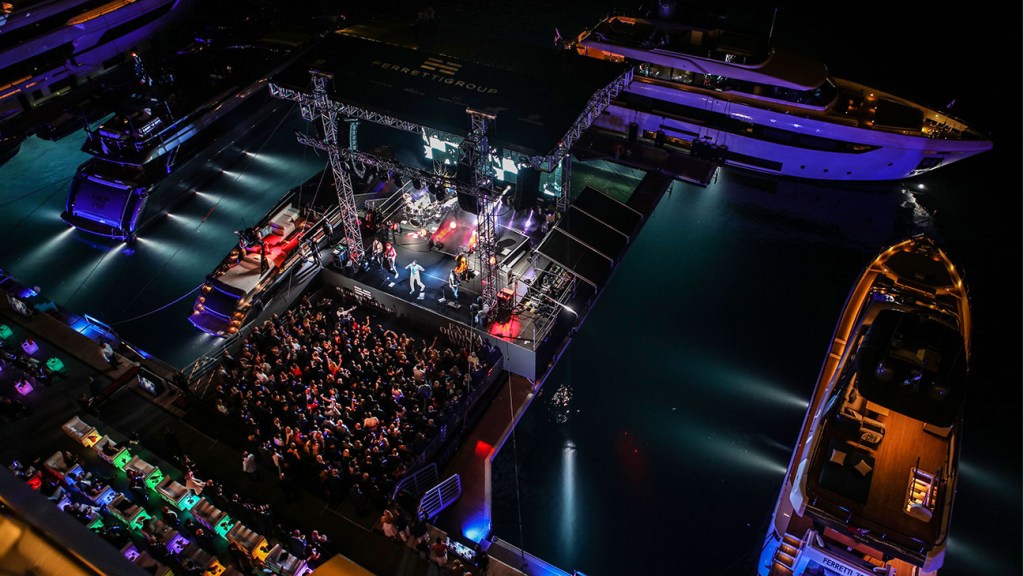 Le Bon’s voice was as powerful as ever as he performed to the occasional “I love you, Simon!” shouted from the balconies. The set list included “Wild Boys,” “The Reflex,” “Pressure Off” and “A View to a Kill” — with James Bond graphics onscreen of blood running down a white gun barrel, evoking Monaco’s red and white flag. The band were having as much fun as the audience as Le Bon introduced Nick Rhodes on keyboards, Roger Taylor on drums and John Taylor as bassist. “The name is Bon, Simon Le Bon,” he riffed, egging the crowd to sing along — “Come on, Monaco!” — with some success, followed by a “Very nice!” with a light-hearted hint of sarcasm probably missed by most.

The favorite “Girls on Film” was de rigueur before the group said goodnight and headed back to the yacht moored to the pontoon, the largest of the fleet of 25 Ferretti Group vessels (including six new models) positioned in front of the yacht club for its annual Private Preview event. The encore included “Save a Prayer” and by popular demand “Rio” — then back to the yacht, which slipped its lines and sailed away to a cacophony of other yachts’ horns.