Phyllis McGuire, the youngest member of the singing pop trio the McGuire Sisters, has died. She was 89.

McGuire died Tuesday at her Las Vegas estate, according to a paid obituary and a report in the Las Vegas Sun. No cause of death was immediately available.

Christine, Dorothy and Phyllis McGuire were famed for their synchronized dancing, sweet melodies and matching outfits and hairdos. They reached their zenith in the 1950s when they earned six gold records for hits including 1954’s “Sincerely” and 1957’s “Sugartime,” both of which reached No. 1, 1954’s “Goodnite, Sweetheart, Goodnite” and 1955’s “Something’s Gotta Give.”

The sisters had the distinction of performing for five presidents — Richard Nixon, Gerald Ford, Jimmy Carter, Ronald Reagan and George H.W. Bush — as well as for Queen Elizabeth II. They entered the National Broadcasting Hall of Fame in 1994 and the Vocal Group Hall of Fame in 2001.

Born in Middletown, Ohio, on Valentine’s Day in 1931, Phyllis Jean McGuire was the youngest daughter of Asa McGuire, a steelworker, and Lillie McGuire, a minister in the First Church of God. The sisters started performing together in public in 1935 at their mother’s church as well as at weddings and revivals.

“We’ve been singing together since I was four years old,” Phyllis McGuire told Vanity Fair in a 1989 interview. “We sang in the car, using the windshield wiper for a metronome. My sisters are the most incredible harmony singers. I can start in any key, and they pick it up.” 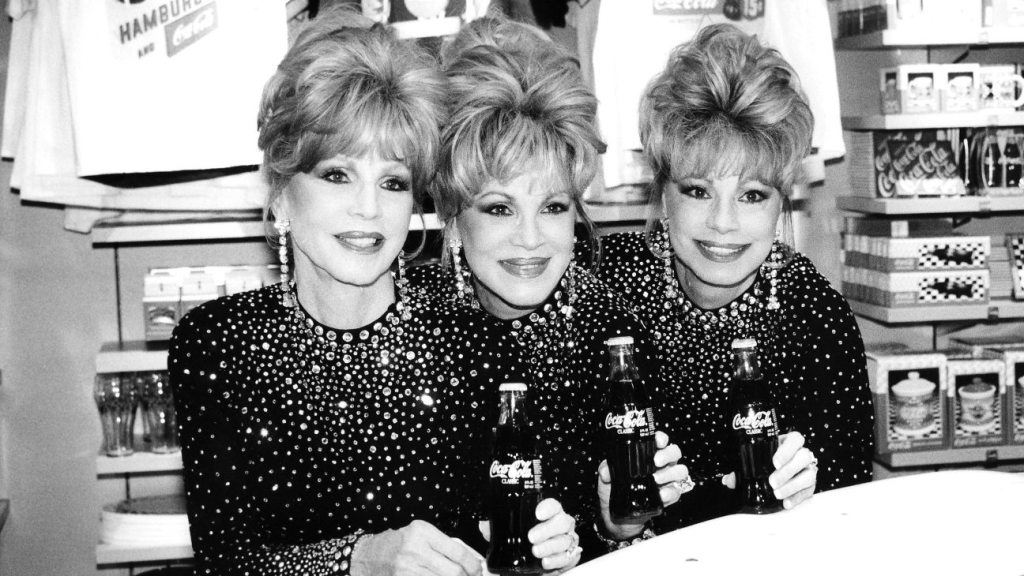 The group was discovered on local television and got a big break when they were whisked to New York to perform on CBS’ primetime variety show Arthur Godfrey’s Talent Scouts in 1952. Becoming regulars on sprawling radio and television variety programs hosted by Godfrey, Milton Berle, Andy Williams and Perry Como, the McGuire Sisters became national sensations.

They toured into the late ’60s, making a last stop on The Ed Sullivan Show in 1968, the year they broke up. Christine and Dorothy started families while Phyllis continued solo.

Phyllis attracted much more publicity than her sisters. She married radio/television announcer Neal Van Ells in 1952, divorcing him in 1956. But the FBI’s exposure in 1965 of her long-running affair with Chicago mobster Sam Giancana gained her unwanted media attention that impacted the group.

“It very definitely hurt our careers for about a year,” she said about her relationship with Giancana. “We were blacklisted on TV.”

Giancana was shot dead at his home in 1975. Despite a litany of showbiz friends from his Las Vegas days, she was one of few celebrities who attended his funeral. “The two great losses of my life were my father and Sam,” she said.

Their relationship was the subject of the 1995 HBO film Sugartime that starred Mary-Louise Parker as Phyllis, Larissa Laskin as Dorothy, Deborah Duchene as Christine and John Turturro as Giancana.

Outside of singing, McGuire tried her hand at acting, starring opposite her friend Frank Sinatra in the 1963 comedy Come Blow Your Horn.

The sisters got back together in 1986 to tour nightclubs and Las Vegas casinos, and in 2004 they performed on the PBS special Magic Moments: Best of 50’s Pop.