Continue to The Hollywood Reporter SKIP AD
You will be redirected back to your article in seconds
Skip to main content
August 25, 2017 8:30am

The MTV Video Music Awards is upping its game this year with bigger stages, more performances and even more music.

Inspired by the ever-changing MTV logo and the iconic Moonman trophy (recently renamed as the more gender-neutral Moon Person), this year’s space-themed event will feature five stages, a massive indoor red carpet and appearances from some of the top artists of the year.

THR got a first look at the never-before-seen red carpet design, along with the venue itself. 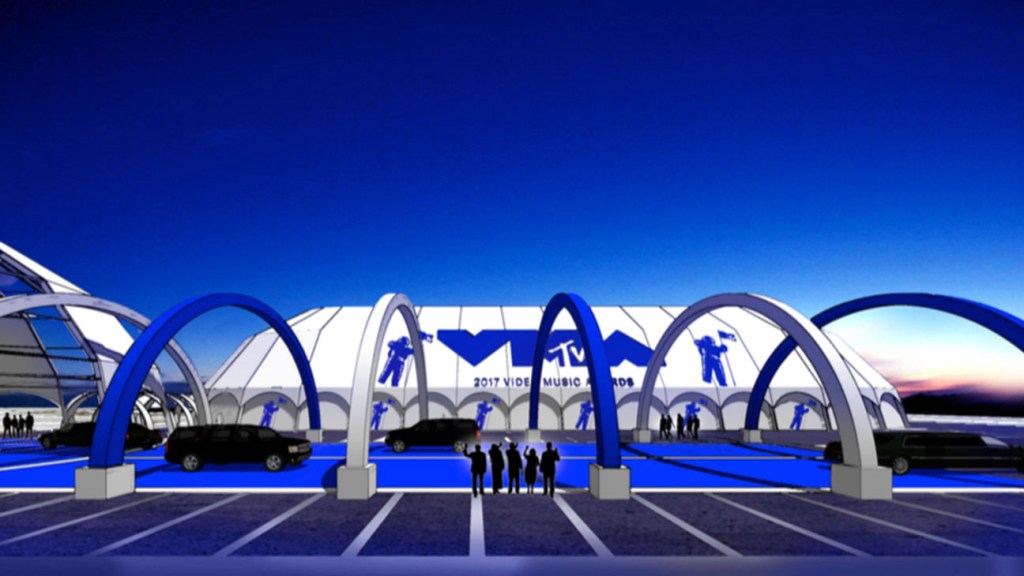 Before the awards show kicks off Sunday, the live event will begin with a preshow to be co-hosted by MTV’s Terrence J and rapper Lil Yachty. The preshow will feature performances from Khalid, Bleachers and Cardi B.

This year’s carpet will be taking place inside a domed, cylindrical tent complete with art installations, tunnels of light and celestial themes. Upon arrival, guests will be greeted not only by the usual paparrazzi and press line, but also by the performances of the preshow that will be going on simultaneously within the track-shaped tent.

“Red carpets typically function outside, and in Los Angeles, that usually puts you in the late afternoon and in the blazing hot sun. So it’s nice because it means that we get to have air conditioning this year,” said Garrett English, executive vp event programming, specials and news at MTV, VH1 and Logo, about the carpet’s tent design. “For us, it puts us in a place where we have control over light and we’re able to build an environment that is much more aggressive creatively.”

After months of preparation for the event, production designer Anne Brahic hopes that all the details will be buttoned up by the time the camera starts rolling Sunday afternoon. However, MTV’s knack for spontaneity isn’t lost on the set designer.

“I’m sure there will be some last-minute scrambling,” Brahic said. “Having worked with MTV more than once over the years, I know how much they love to augment the experience with last-minute appearances, so that always creates some challenges.” Brahic also told THR that in addition to the expected arrivals, there will be some pop-up performances throughout the event. 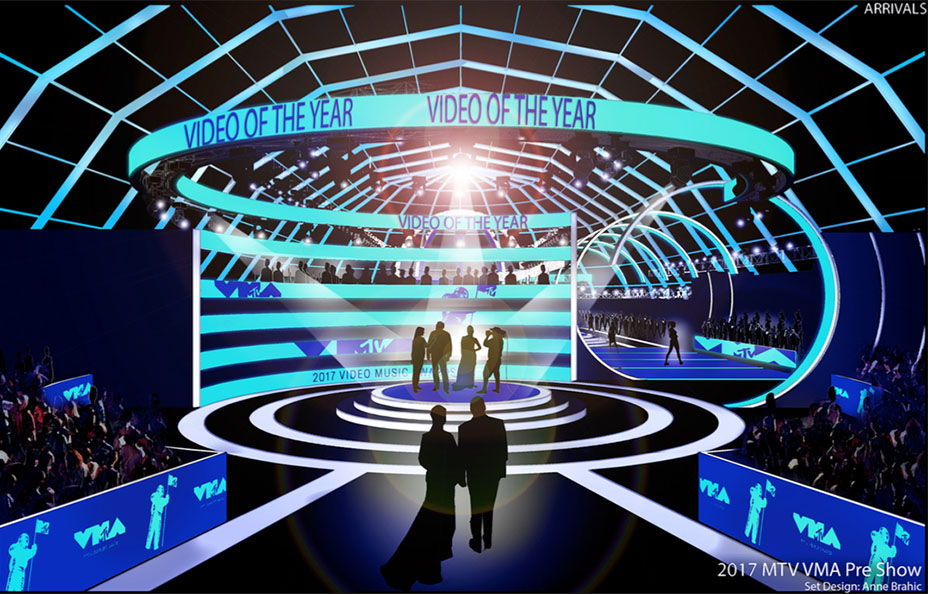 As for the venue itself, the 2017 VMA producers have expanded the set to include two main stages and three smaller stages, all incorporating the modern and futuristic themes of the night. “The only way we can get more performances in the show is if we have more spaces for people to perform,” said set designer Ric Lipson.

The audience will be seated in a tiered landscape, while the stars sitting below will enjoy themselves in more private, lounge-style areas. “We wanted to have the VIPs feeling more immersed than they normally would and to make them feel more comfortable,” Lipson said.

In regard to any potential interactions between feuding stars, such as Taylor Swift and Katy Perry, English claims that “the reality is that you can’t really manufacture those things. They sort of just happen. The VMAs are nothing but spontaneous and unpredictable. Everybody’s here to have a lot of fun and it’s a place where a lot of crazy, spontaneous and sometimes controversial things happen. I fully expect that to be occurring this year as well.”

The event will be hosted by VMA veteran Perry at The Forum in Inglewood, Calif., airing live on MTV.