Late Night Hosts Take on Cassidy Hutchinson's Trump and Capitol Riot Testimony: "Who the Hell Let Him Out of His Car Seat?"

Lucian Wintrich paced in front of the White House, a cellphone pinned to his ear. On the line was his boss, Jim Hoft, founder of The Gateway Pundit, a right wing blog that dabbles in conspiracy theories for the site’s 5 million monthly readers. “This makes me look like a pussy,” he muttered, “like I didn’t want to go in today.” Moments earlier, the White House had denied Wintrich access to a daily briefing with White House press secretary Sean Spicer. Wintrich, 28, suggested that Hoft pull some strings and “get in touch with Hicks or Bannon … maybe Hicks?” He was referring to President Trump’s director of strategic communications, Hope Hicks, and chief strategist, Steve Bannon, who is openly contemptuous of the mainstream media.

Since Wintrich had been named the site’s first White House correspondent, he had struggled with the newness of Washington. Gay and nominally Jewish, he felt more at home in New York, where he had worked as a “creative” at a prominent ad agency and a club promoter. He dated a creative-writing student and model from Colombia and took filter-heavy pictures of scantily clad teen boys. But Wintrich was no liberal. He had grown disillusioned with progressive politics during college, and his contrarian stances sharpened during the election. At the Republican National Convention, he had gathered his pictures into an exhibit called “Twinks for Trump,” in which boys sported “Make America Great Again” caps. He parlayed his transformation from a college progressive to a Milo Yiannopoulos disciple, and then, with nearly no training in journalism, befriended Hoft, who helped him grab a powerful seat in the elite world of Washington media. He’s one of a few dozen people who have a badge and an invite to the James S. Brady briefing room and consistent access to many of Trump’s most senior advisers. In recent weeks, he’s written about North Korea, Russia and Trump’s relationship with the media.

Now Wintrich was wondering aloud whether his exclusion was part of a liberal media conspiracy. He turned to tell an interviewer from WeAreChange.com that a “nefarious plot” had been hatched by the White House Correspondents’ Association.

To an observer, the display felt like a temper tantrum, and by design, it probably was. It also felt in keeping with the media circus that has emerged out of Trump’s arrival in Washington, where a penumbra of reality television seems to hang over everything. Trump’s late-night tweet storms and his bashing of reputable media outlets as “fake news” have fostered relentless, high-octane drama. The turmoil has blown open space for exploitation by outlets long considered fringe or disreputable. This is where Wintrich, who proudly proclaims himself a media troll, lives. “Like, obviously I’ll take the occasional jab at media,” he said. “Because I hate them all.”

The distaste is mutual. “You can’t call what he does reporting,” says one longtime White House correspondent for a top U.S. newsweekly. “It’s just offensive and meant to be provocative.”

Later that night, Wintrich was having drinks at Larry’s Lounge, a popular D.C. gay bar. Across from him was Andrew Feinberg, who writes for Sputnik, a news outlet established by the Russian government. Sipping a cocktail, Feinberg said he was distressed that more of his White House colleagues hadn’t befriended Wintrich. “I work for an outlet that has been publicly accused of being Russian propaganda many times, and yet people have been completely civil to me,” he said. 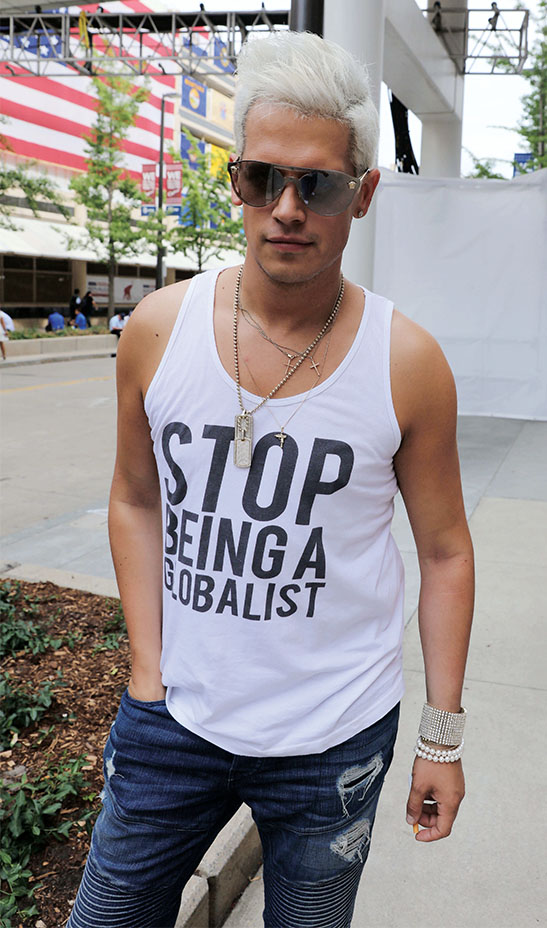 Wintrich’s phone rang, and he jumped up. A source was calling. Moments later he was back, with news — a tip about a teacher who allegedly had forced students to give him oral sex but was being protected by teachers’ unions. “I’m going to tie that f—ing back into Trump’s education policies,” he said, “because teaching unions need to be f—ing broken up.”

Wintrich sees himself as having two jobs: writing about “dry policy stuff” and trolling the media. “It’s a mixture of the two,” he said. He knows he has ascended in large part for his performative abilities. “To get younger audiences interested in the actual news, you have to play that up,” he told me. “Half of what I do — well, on social media specifically — is f—ing with people.”

If Trump’s arrival advances the destruction of the wall between serious news and entertainment, Wintrich is on board. “I think jumping into social media and being like, ‘Yeah, I have a 10-inch dick flaccid while writing about actual policy,’ right there is a certain humor to it that has been lacking for a while,” he said.

Feinberg, who wears a three-piece suit and a kind of jubilant hang-doggedness with equal gravity, stared glumly into his drink. “He doesn’t listen to a word I say,” he said. Wintrich describes Feinberg mockingly as a “serious journalist.” Both were drunk by now. They descended into an argument about the controversial dossier detailing Trump’s alleged misdeeds in Russia, who leaked what to whom and what it all amounted to.

Two nights later, Wintrich and his boyfriend, Brian, were intertwined in a booth at Shelly’s, another popular D.C. hangout. They had ordered burgers, and when the food arrived, both exclaimed on its cuteness.

Wintrich’s turn toward conservatism began at Bard College, where he said a dean chastised him for singing along to a rap song while hosting a radio show. “She said that music was written by black people for black people, and it wasn’t meant for me,” he said. “It didn’t make sense. It’s music.” He feels that his coming out as a Trump supporter was largely provoked by ardent left wing critics. “All of a sudden they’re saying that I’m a Nazi for supporting Trump. At first, I just said Trump’s the best option, which I’ll hold to. And I tend to double down. And so after that, I was like, ‘OK, now I’m saying Trump is the savior, the God-Emperor of America.'”

Despite his political transitions, Wintrich considers himself a gay advocate. “Parents of gay people in very conservative states have reached out to me and said how they were disgusted by their gay child until [they] started reading [my] work and have had a change of heart,” he said. 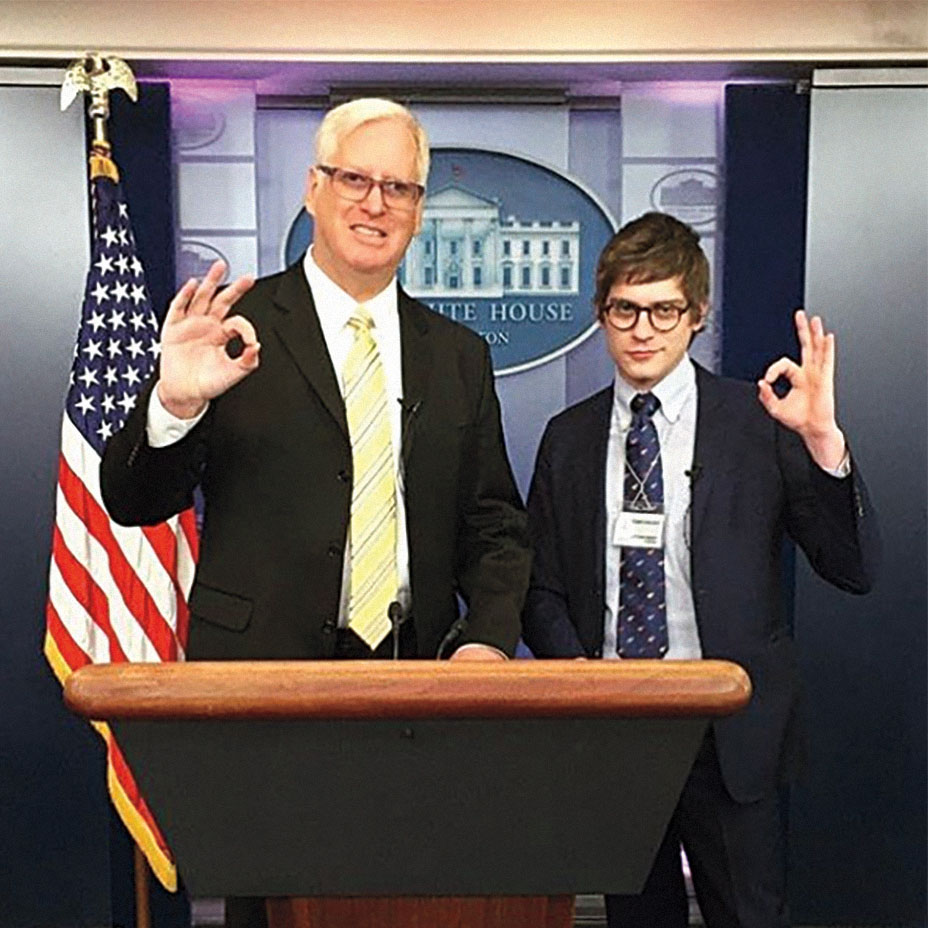 A server brought more drinks. Wintrich plucked at a fry, waving it languorously like a tiny wand. A tide of woe issued forth: Refugees were “flooding” the U.S., threatening social stability; welfare was out of control; Europe was succumbing to never-before-seen waves of terrorism. Like Trump and Yiannopoulos, Wintrich trades in declarations of certainty. The truth, of course, is more complex — and for a media troll, perhaps less interesting.

I asked if he lost any friends due to his support for Trump. “All the shitty ones,” he said. “The faggots in New York who stopped talking to me, whom I knew from the club scene, I didn’t care about them,” he said. “But if somebody actually knows me and my character and beliefs, that does affect me.”

I suggested that some of the antagonism was self-generated.

Wintrich’s father is Jewish. The Nazis killed much of his dad’s family, but his grandfather, a leader in the Polish resistance who once swam across a freezing lake to save a woman in need, made it out and wrote a book. Another side of his family had been aristocrats, but he wasn’t quite sure what they had done during the war. “I don’t like talking about it,” said Wintrich, growing pensive.

I asked him if there was something grotesque about a descendant of refugees advocating a ban on people in similar situations. He said that his ancestors had been professionals who had contributed to society.

The same was true, I pointed out, of most Syrian refugees.

“Some of the specific cases where educators are pulled or when people who are absolutely providing benefit to society, as we all should be. It’s … I don’t know. To be honest, I’d agree with that. It’s frustrating.”

He and Brian left. Earlier that day, someone had tweeted about Wintrich’s “disgusting” homosexuality. Wintrich responded that he and Brian were going to “smash extra hard” that night in defiant response.

A few minutes later, I got a text: “The refugee line was solid. … It’s an interesting counter-perspective.”

In the weeks since then, Wintrich has been active. He has penned a few salacious articles on The Gateway Pundit. Mostly he has been trolling hard on Twitter. In late March, he was back in New York. An art curator was interested in showing his “Twinks for Trump” series, but gallery owners were balking. “They researched you and have had a panic attack,” the dealer told Wintrich, who dutifully reported it on Twitter.

Wintrich recently returned to Washington and finally found a place to live, and he’s attending Spicer’s daily briefing. But he was still waiting to get his first question answered.