America Ferrera, Eva Longoria, Mónica Ramírez and over 150 Latinx leaders in entertainment, business and activism sent a message of solidarity to their community on Friday following ICE raids, the El Paso shooting and reports of poor migrant detention conditions.

“If you are feeling terrified, heartbroken and defeated by the barrage of attacks on our community, you are not alone,” the Latinx leaders wrote in an open letter to the familia Latina that was published in The New York Times, La Opinion, El Nuevo Herald and El Diario newspapers on Friday. “But, we will not be broken. We will not be silenced. We will continue to denounce any hateful and inhumane treatment of our community. We will demand dignity and justice.”

The letter, which was published in English in the Times and Spanish in Spanish-language newspapers, referenced “hate crimes” — including the Aug. 3 El Paso shooting at a Walmart in Texas that targeted Latinx families and left 22 dead and 24 injured, which is being investigated as an act of terrorism — as a motivation for the message. It cited last week’s ICE raids in Mississippi that brought an estimated 680 workers who were believed not to have documentation to work in the U.S. into custody, the Trump administration’s child separation policy and Trump’s political rhetoric about immigrants as well.

“The indignities and cruelty we have endured will never change the truth that the contributions we make to this country are invaluable,” the letter continues. “Our humanity must be respected. And, we won’t stop organizing for ourselves, our children, and for the soul of this nation.” To “allies,” the letter asks that they hold leaders accountable, support community organizations and do their part to speak up and act against “hate.”

Mónica Ramírez, the founder of Justice for Migrant Women and Esperanza: The Immigrant Women’s Legal Initiative of the Southern Poverty Law Center, got the idea for the letter in the aftermath of the Mississippi ICE raids on Aug. 7. That day and the day following, she reached out to Latinx leaders in entertainment and other fields to pull a message together. “I just really felt strongly that we needed to speak with one voice to our community in such a difficult moment,” she says.

She felt that it was important to bring in prominent names in the Latinx community because “they represent different areas of life for Latinx communities.” In addition, each of the signees “have people who look up to them and listen to them, whether that’s inside or outside the Latinx community,” and she wanted to utilize those networks.

Fellow letter organizer Olga Segura, the actor-producer behind The Dinner and Verónica, said that she wanted to sign the letter because “We want our community to know that we are not alone. It’s inspiring to see many people starting to link arms in support of the Latinx community and our country.”

Ultimately, Ramírez hopes the letter shows that Latinx leadership is needed in the U.S. at present. “We think that it is a symbol of our leadership in the way that we as a community are known for being a loving and open community. We believe that this is the kind of leadership that is needed in the country and that we want people to follow.”

Read the letters in English and Spanish below. 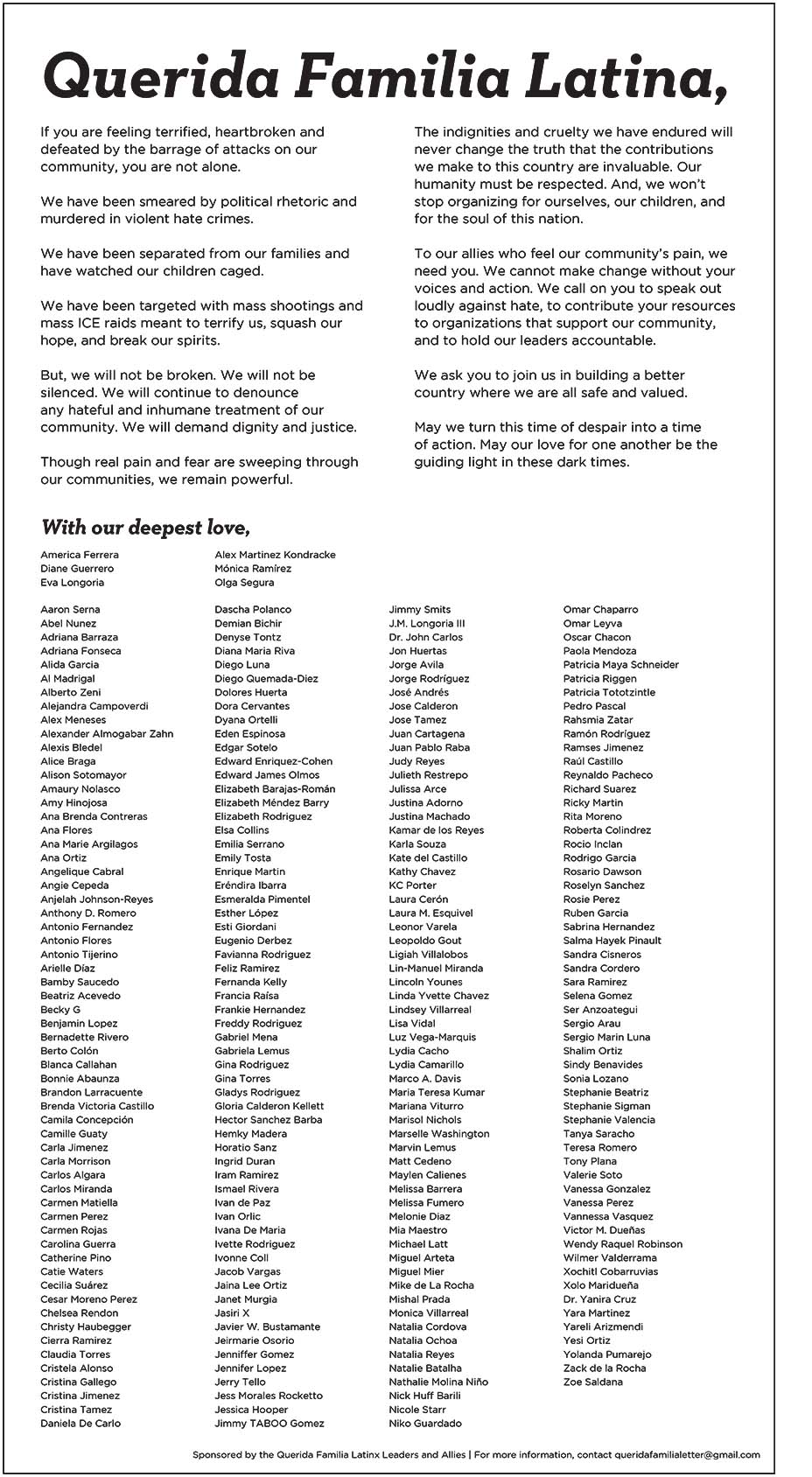