There’s a reason America Ferrera leans into using the F-word on her new short-form series, which is titled America…AF.

The Instagram series, which the actress and activist launched in the lead-up to the 2020 election, sees Ferrera breaking down and demystifying the American voting process — as well as taking on topics like voter suppression for Black, brown, female and young voters — in an authentic way. But while the segments are frank, they’re also funny.

“I can’t think of anything else that would inspire me to use so much bad language!” Ferrera tells The Hollywood Reporter of the informative yet entertaining vibe of America…AF. “I can’t think of anything else that’s more deserving of curse words than the obscenity of how power is abused in our election systems and how so many of us are kept in the dark about how those systems impact us.”

Ferrera has spent the last 12 years on the ground campaigning and inspiring civic engagement, dedicating her time when not working on a set (or being a mom to her two children) to turning out the vote by registering voters and gaining an understanding on issues that “people care about,” like voter suppression and access to good education and healthcare.

In response to the 2016 presidential election of Donald Trump, she co-founded Harness with husband Ryan Williams and Wilmer Valderrama, an organization that connects communities — from frontline organizers to Hollywood storytellers — in order to amplify marginalized voices and inspire and effect change. Sparked out of their involvement in the 2018 midterm elections, Ferrera and nine other women, including Eva Longoria, recently launched She Se Puede, a Latina digital lifestyle platform covering everything from fashion to voting. For 2020, Ferrera has been traveling the country for the Biden-Harris campaign and now, just weeks out from the presidential election between Trump and Democratic nominee Joe Biden, and pivotal down-ballot races across the country, Ferrera has taken to her Instagram with America…AF.

The idea for the series was sparked after a friend forwarded her an article about a New Jersey woman who spoke of having a political awakening after following Ferrera on social media during the midterm elections.

“Back in 2018, in a very casual way — and kind of out of desperation — I turned to my Instagram Stories and said, ‘Why aren’t you voting? If you’re not voting, tell me why. I need to know who is not on board to vote in this incredibly important midterm election.’ And the responses really surprised me,” she recalls. “It wasn’t what I had expected in terms of, ‘My vote doesn’t count’ or, ‘The system’s rigged.’ Instead it was: ‘I don’t have a car to get to the polls’; ‘I don’t know my deadline to register’; ‘I don’t know where to get the ID I need’; ‘I don’t know how to find my polling place’; ‘Where does one register?’ It was all of these very basic pieces of information and resources that people needed to understand how to access voting. And I felt really compelled to try to give some of that information via my platform. When my friend forwarded me that article, it reminded me: There are many ways in which I have been organizing and rallying people to vote and to engage, but I have this very useful tool of a social media platform with a direct connection to my audience, I should also be using this.”

That’s when Ferrera says she set up her iPhone and started talking to her 1 million followers, “and pretty unfettered talking,” she adds.

Yes, she curses. She also drinks wine. And she answers their questions.

So far, Ferrera has posted two episodes. The first, posted on Oct. 16, covers why people should be voting in the 2020 election and how they can cast their ballot; the second, available since Oct. 26, tackles misinformation and voter suppression. She’s currently working on her third episode, and is anticipating that more information will be needed after Nov. 3, as the country will likely be awaiting results.

“I just wanted to be able to speak as frankly, as passionately and as clearly about these issues in the most authentic way that I could,” she says of the goal of America…AF. “Because I do care so deeply about these issues, and I feel like everybody should care, and everybody should have an opportunity to understand that they are impacted on a day-to-day basis about decisions that other people make. Elections are our opportunity to make the decision about who those people are that are making the decisions about our lives and the lives of everyone that we care about.” 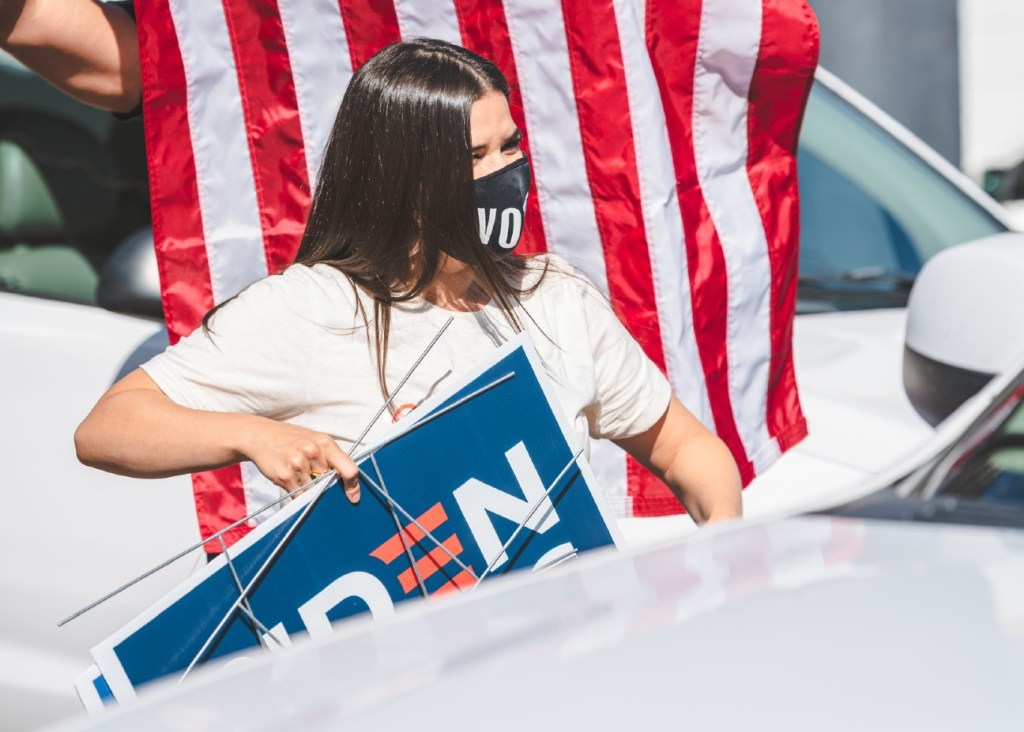 This election is indeed unlike any other in recent history due to the novel coronavirus pandemic. Ferrera notes that the pandemic has placed a huge burden on voters to figure out how to get their ballots in on time, especially amid external obstacles like limited drop-off boxes, polling places and voting hours.

“The story that long lines are a sign of voter enthusiasm is a lie — long lines are a sign of voter suppression. It should not take four to five hours for people to cast their ballot in a functioning democracy,” she cautions. “And what we know is that it doesn’t take everybody that long to vote. We know that it takes Black and brown and young communities that long to vote. If you are Black, brown and young, it is exponentially more difficult for you to be able to vote and then for your vote to really count and be counted.”

She continues, “There is so much energy time and money and power being aimed at trying to stop me and people like me from voting, and that tells us everything we need to know — which is, there is great power in our vote. But we need to be able to recognize these obstacles that are in our way and have the information on how we fight back. Because the only way we can change how we vote in this country is, to vote! It’s mind-boggling.”

In addition to educating voters through America…AF, Ferrera participated in the Every Vote Counts: A Celebration of Democracy special, a star-studded broadcast on CBS that urged civic action just five days out from Nov. 3. If 2016 taught her and her Hollywood peers anything, she says, these final days couldn’t be more important. “There is so much work to do between now and Tuesday that will determine the outcome,” she says.

Comparing Hollywood’s mobilization efforts in 2020 to 2016, she explains, “Over the last four years, people have been organizing like their lives depend on it — and, they do. A lot of that organizing has been happening in the space between frontline activists and organizers, who are the experts at how to mobilize and inform and educate the communities, and storytellers, celebrities, culture-makers and people with platforms to amplify and to tell stories in creative, resonant ways.”

Case in point: the recent spate of film, TV and musical cast reunions that have been organized to benefit down-ballot races key states in the election, like Wisconsin, Texas, Michigan and North Carolina.

“There has been so much strategic focus and organizing between those two communities, and I think that is what you’re picking up on and seeing,” she says of the entertainment fundraisers and specials happening in collaboration with the experts on the frontlines. “When people with massive platforms are showing up to amplify and shine light on specific information or campaigns, they’re doing it from a grounded, informed place that is in relationship with the experts who understand what the real wins look like. I think that organizing of those two worlds is really paying off. And it is about strategy and about taking what we have learned that works, and also what doesn’t work, and being smart enough to evolve so that we’re being as impactful as we possibly can be.”

In keeping with the theme of educating voters, Ferrera urges anyone voting by mail or in-person to do their homework. In California, especially, she cautions that there is so much to vote for, with 12 propositions on the ballot, it could be overwhelming for someone who goes in unprepared. She suggests turning to Ballotpedia or California’s official voter guide as a resource, or seeking out leaders, organizations or newspapers who have endorsed a candidate or measure and reading their explanations as to why.

As for the collective voter angst that the country might be feeling while awaiting the election results, Ferrera encourages people to find joy in the process of voting and having a voice in a pivotal moment for the country, and to have faith in democracy.

“What we need to realize is that we’ve held an election in this country in the midst of a pandemic before; we’ve held an election in the midst of war before. Our systems are set up to do this, but we need to have faith in those systems,” she says. “Millions and millions more Americans voted by mail this year, and that means that we have to wait for those ballots to be counted and that means that we most likely will not have results for many, many races on election night — and we need to understand that that is not a failure of democracy, that is democracy working for us.”

She continues. “That is every vote needing to be counted before these races and these elections are decided. And we need to be aware of that as a people. We have to understand what it looks like, because there are obviously narratives that could create chaos and distrust, and work against democracy really being able to play out and every vote being counted in this incredibly important election.”

Looking back on both Obama’s and Trump’s elections, Ferrera knows that anything is possible in any direction. In these final days, she’s being driven by a head-down focus of putting in the work that still needs to be done.

She isn’t wasting time hoping. Instead, she’s trying to inspire.

“I want to put my head down on my pillow and know that I did every last thing that I could do in my power to try to be a part of the outcome that I want to see happen,” she says of election night. “Moments like the one we’re in now are moments that have changed America for the better. That is what’s possible. And if we show up for that, and not only show up for what we’re against but also what we are for, there can be great joy in that and great celebration and power in collective action.”