With a few weeks remaining before the first of 12 nationally televised Democratic primary debates starts June 26 and 27, much of the discussion about coverage of the 2020 campaign has centered on the town hall events that the Big Three cable news networks have held.

But while the media and political chattering classes have been consumed with talk about CNN’s more-the-merrier approach to town halls (they’ve hosted more than 20) and the unwillingness of some Democrats (such as Sens. Elizabeth Warren and Kamala Harris) to take part in Fox News events, a new Hollywood Reporter/Morning Consult poll of 2,200 people shows that most people aren’t even tuning in.

More than half (55 percent) of those polled say they’ve heard “not much” or “nothing at all” about the dozens of campaign town halls held to date, while only 8 percent of respondents say they’ve heard “a lot” about the events. For none of the 14 town halls asked about in the survey did even 10 percent of respondents say they watched “all of” the event. 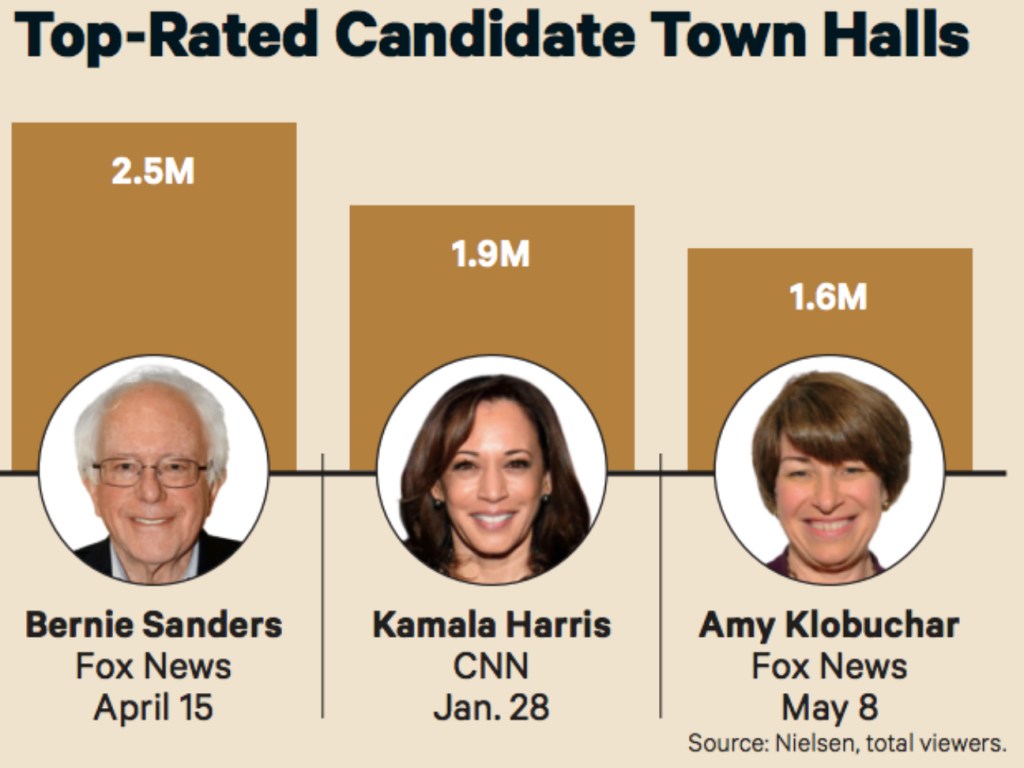 Mayor Pete Buttigieg and Sen. Bernie Sanders made headlines by appearing in Fox News town hall events over the past two months, with the upstart candidate taking on the network’s opinion hosts, but only 12 percent of those polled say they watched the former and 22 percent say they watched the latter.

Perhaps more important, the town halls haven’t generally changed perceptions about the networks organizing them — 57 percent feel that way about Fox News’ events, 60 percent about CNN’s and 62 percent about MSNBC’s.

Those surveyed didn’t offer much praise for the town hall format, with only 33 percent saying they “strongly” or “somewhat” like the forums. 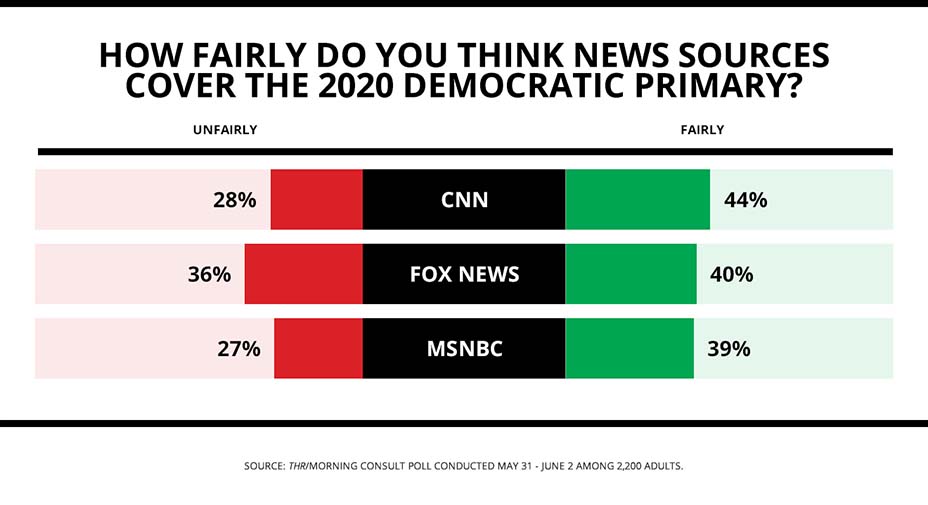 While most Americans aren’t making a big deal about town halls, television news veterans say they are a public service and an antidote to the worst instincts of the cable news business, including a focus on horse race-, poll- and gaffe-oriented coverage.

“The town halls are a very positive contribution to the conversation,” says Andrew Heyward, the former CBS News president who is leading a research project on television news at Arizona State’s Walter Cronkite School of Journalism. “Let them debate the latest polls all they want to with their pundits. They’re actually putting the candidates and the citizens on television. That’s good.”

Jonathan Klein, the former president of CNN U.S., says the ubiquity of cable news town halls are a “fascinating trend” and a “welcome addition” to network campaign coverage. 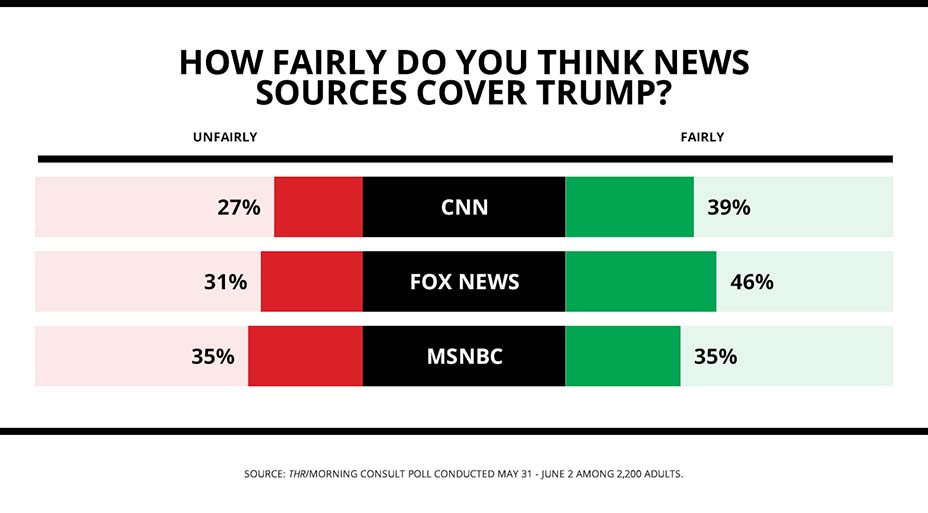 Both executives caution that it’s too early to expect mass awareness of town halls, which are watched mostly at this early stage of the campaign by political aficionados and the highly engaged. “It’s difficult to get a general audience excited about a town hall with a candidate they’ve never heard of and who gets less than 1 percent in national polls,” Klein says. “I think you’ll start to see more general interest when the debates begin and especially as you get closer to the New Hampshire primary.”

“Interest will build significantly, but we have a long way to go,” Heyward says. “A year from now, people are going to be paying a lot more attention. Right now, a person tuning into a town hall is pretty similar to a person in Iowa who is going to a candidate meeting.”

Some of the town halls have rated well for the cable networks, with Fox’s April 15 event with Sanders still leading the pack with 2.5 million total viewers, though executives say that’s not the point. “We are not producing these events merely for ratings,” CNN executive Sam Feist says.

More broadly, 44 percent of respondents say CNN is covering the 2020 field “fairly,” compared with 40 percent for Fox News and 39 percent for MSNBC.

Those surveyed are much more confident in the fairness of the broadcast news networks (53 percent say they’ve been fair), matched by a strong confidence in public broadcasting.

Executives at NBC News, CBS News and ABC News spoke about the importance of getting coverage of the 2020 election right at an industry conference in New York on June 6. “We may have more journalists deployed in the field covering this campaign than any other time in history,” said NBC News president Noah Oppenheim.

CBS News president Susan Zirinsky said her network’s mission is “to reveal America to itself.” In the last election cycle, she said, “I don’t think we really understood the country.”

Heyward, who ran her network until 2005, says it’s always like this. “Every time an election cycle comes around, executives and reporters say, ‘This time we’re going to cover the issues,'” he says. “I’m guilty of this myself. We say we are going to do it differently. Historically, we haven’t. It’s laudable that these network news executives are focused on covering the heartland voters more effectively than last time. Let’s see what shape that takes.” 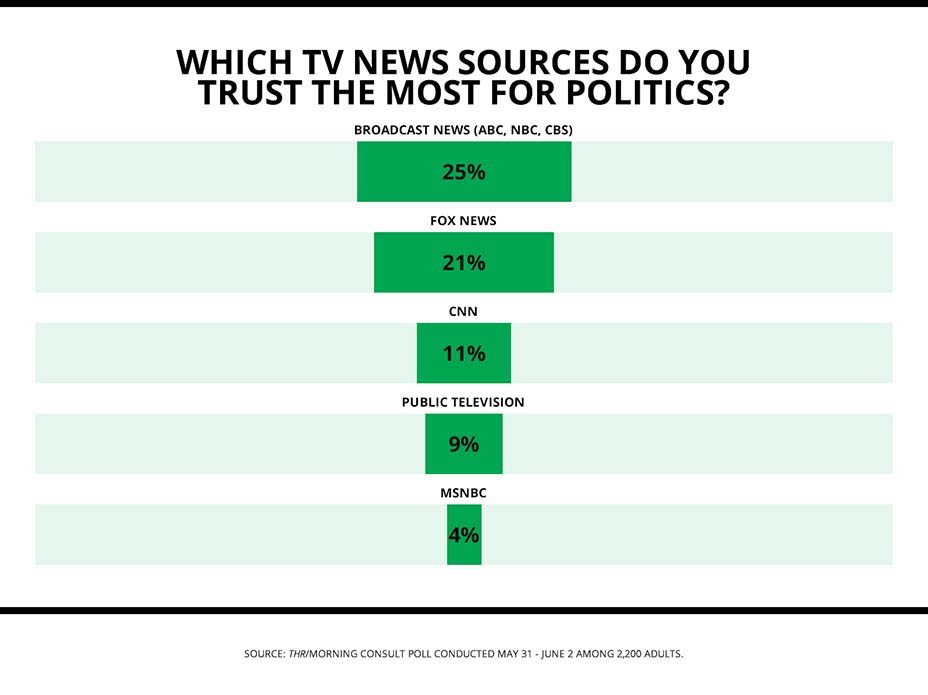