Judge Amy Coney Barrett’s confirmation to the U.S. Supreme Court has set off alarm bells in Hollywood’s LGBTQ community, many of whom worry her addition to the nation’s top court may lead to rulings that will overturn or severely diminish victories in equality, including marriage rights.

In a statement to The Hollywood Reporter ahead of the vote, actor and comedian Billy Eichner calls Coney Barrett “extremely dangerous,” while actress Cynthia Nixon says she’s “terrified.”

“As a queer person I am terrified of this new 6-3 conservative court placing other people’s so-called religious ‘freedom’ over our basic civil rights. There is an ugly history in this country of conservative zealots invoking God as a basis for depriving marginalized groups of their rights and their humanity,” Nixon said. “The LGBTQ community has just recently begun to shed its longtime less-than-human status. Quicker than you can say Amy Coney Barrett, we may see these hard-won rights and protections torn from us once again.”

On Thursday, the Senate Judiciary Committee voted 12-0 (with Democratic senators boycotting the vote) to advance the conservative jurist’s nomination to a full vote by the Senate. On Monday night, she was then confirmed by the Republican-led body. 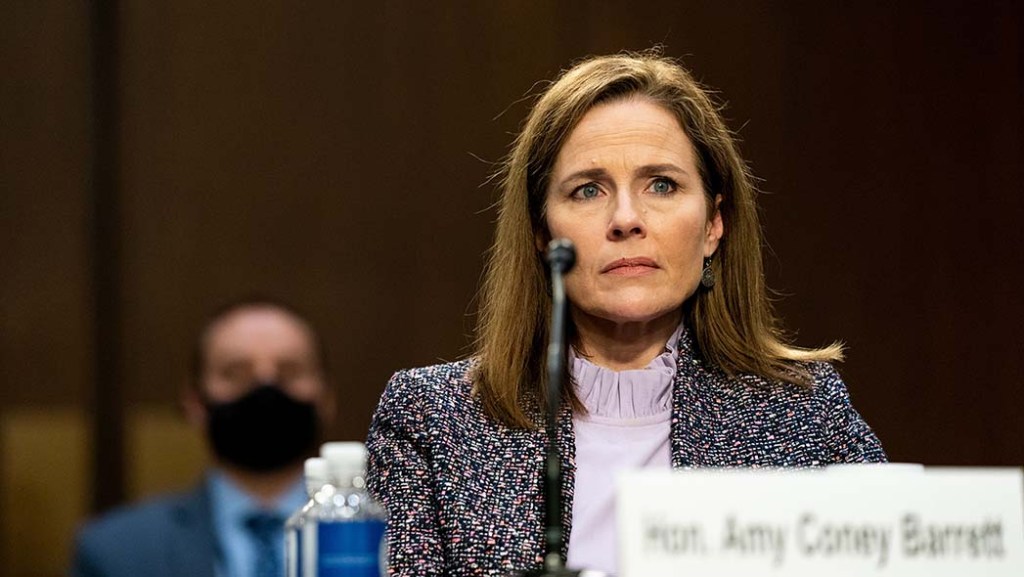 But as reported by The Associated Press on Oct. 21, Coney Barrett was the trustee of a private Christian school — affiliated with the People of Praise Catholic community, which she is associated with — for nearly three years that wouldn’t allow LGBTQ teachers nor admit children of LGBTQ parents. She also was paid five times to speak at a law-student training program sponsored by the ADF (Alliance Defending Freedom); the group, which has been classified a hate group by the Southern Poverty Law Center, states on its website that it “remains committed to promoting the truth that marriage is the lifelong union of one man and one woman.”

In his statement to THR, Eichner cited her connection to People of Praise for his deep concern. (Coney Barrett has declined to say if she is an active member of People of Praise). “She joined the board of trustees of a chain of private schools which did not welcome children of gay parents or gay teachers. She is extremely dangerous and, if she chooses to bend the law to reflect her own bigotry, she is likely to become the biggest legal threat to LGBTQ+ Americans that we’ve seen in a long time,” the actor and comedian said.

Coney Barrett, in replacing the late justice Ruth Bader Ginsburg, will give the U.S. Supreme Court a decidedly more conservative 6-3 tilt. Concerns from the LGBTQ community about a shift in the ideological makeup of the court were heightened on Oct. 5 when Justices Clarence Thomas and Samuel Alito, in a four-page statement, questioned the precedent set in 2015 in the Obergefell vs. Hodges decision which legalized same-sex marriage nationwide. “By choosing to privilege a novel constitutional right over the religious liberty interests explicitly protected in the First Amendment, and by doing so undemocratically, the court has created a problem that only it can fix,” wrote Thomas.

Actor Wilson Cruz, a member of the board of GLSEN, an organization which advocates on behalf of LGBTQ students, called Barrett’s nomination “the latest and the most egregious example of the far right’s attempt to turn back the clock to a time when one could easily deny the love, humanity and dignity of LGBTQ people.”

He added: “Everything we know about this nominee’s life and views confirms the risk to LGBTQ lives — our marriages, our employment, the education of our children, our healthcare, our planet and our very way of life are at risk. We have fought too hard and too long to return to a world in which one cannot, at the very minimum, distinguish between a preference or an inherent trait. That is not an option.”

Once confirmed, among the earliest cases she would hear is Fulton vs. City of Philadelphia, which is scheduled for oral arguments on Nov. 4, the day after Election Day.  The case is a legal challenge to the city’s non-discrimination requirements brought by a Catholic social-service agency, Catholic Social Services, that declines to work with same-sex couples who hope to become foster parents. Jenny Pizer, law and policy director at LGBTQ civil-rights group Lamba Legal, calls the case “massively important.”

Explains Pizer, “In past years, it would have been completely obvious that nobody has an affirmative right to get a public contract while insisting on not complying with the contract’s terms. However, the law in this area has been shifting steadily to the right.” Pizer says that if the Supreme Court rules in favor of Catholic Social Services, “It would probably make it very, very difficult for government or private parties to enforce civil rights law.”

Adds Sarah Warbelow, legal director of the LGBTQ advocacy group Human Rights Campaign, “If they make a decision in favor of the agency, it’s really going to open up a Pandora’s box and allow for potentially widespread discrimination against LGBTQ people across our social safety net, all of those government-funded programs that are operated by religious agencies that people depend upon in their time of need — emergency shelters, homeless shelters, veterans services, counseling for runaway and homeless youth.”

The Philadelphia case is part of a rising tide of religious-freedom cases which are expected to continue working their way to the Supreme Court. Coney Barrett could be a critical deciding vote on a range of other cases that could affect LGBTQ rights and equality, says Warbelow, such as cases likely to be brought regarding transgender students and the use of bathrooms and honoring their preferred pronouns and about whether transgender people can serve in the military.

In previous writings, Barrett Coney has said that her originalist view of the Constitution means that, “I tend to agree with those who say that a justice’s duty is to the Constitution and that is thus more legitimate for her to enforce her best understanding of the Constitution rather than a precedent she thinks clearly in conflict with it.”

Even Coney Barrett’s statement that she doesn’t discrimination based “on sexual preference” upset the LBGTQ community who took issue with her calling orientation a preference.

“We have been very publicly opposed to her, because of her deep record as a scholar and as a jurist attacking the legal rights of LGBTQ people,” says Warbelow.

As to whether the precedent set in 2015 for same-sex marriage equality could be overturned, Warbelow says that the recent declaration by Justices Thomas and Alito is “going to invite a ton of challenges to marriage equality. We think realistically what this is going to do is set up a battle over marriage where the court may be inclined, if it is conservative, to say, that LGBTQ people aren’t entitled to all of the rights of marriage. Not that it will be taken away but that the court will view the marriages of same-sex couples as second class rather than on the same terms. And that can show up in every way, from hospital visitations and medical-decision making to what it means to be a parent.” The Obergefell decision was authored by now-retired Justice Anthony Kennedy; chief justice John Roberts was in dissent in that case. However, the conservative justices on the Supreme Court are not uniformly hostile to LGBTQ rights. In June of this year, Trump appointee Neil Gorsuch notably wrote the majority opinion in Bostock v. Clayton County, which held that Title VII of the Civil Rights Act, which bars discrimination “because of sex” also applied to sexual orientation and gender identity.

Brandon Kyle Goodman, a nonbinary queer Black actor and advocate, has a sense of dread about Coney Barrett’s nomination and ascension to the top court.

“My marriage or security of my job should not be up for debate because of the orientation of my sexuality or the way I identify in my gender,” he said.

Nikki Weiss-Goldstein, owner of the agency Nikki Weiss & Co, offers advice to LGBTQ people who are concerned. “Whatever happens, we all need to be protected,” says Weiss, who legally married her wife, writer Jill Goldstein, in 2013. “You can’t rest on your laurels and think everyone is going to be ok. You really just have to take your own issues into your own hands and make sure your family is protected.”

For LGBTQ people in relationships, she says, “make sure that you have healthcare power of attorney, that you have wills, that you make sure your assets are in a trust so that things are written and legally bound and can’t be challenged. It’s the time to get your affairs in order.”

Oct. 27, 6 a.m. This story has been updated to reflect the news of Barrett’s confirmation.