It’s the calm before a presumed storm at UC Berkeley, where former Breitbart News editor Ben Shapiro is set to speak Thursday night in a sold-out hall. He will be surrounded by on-duty cops, private security and 1,000 ticket holders — mostly fans but maybe a few disrupters, to boot.

There will also be a film crew in tow, as Adam Carolla and Dennis Prager continue their quest to make a documentary movie about political correctness on campus, dubbed No Safe Spaces.

“My talk is about the ridiculous and unacceptable violence that some on the left have embraced and the stupidity of labeling everyone a Nazi so that you have an excuse to punch them,” Shapiro tells The Hollywood Reporter.

Berkeley has indeed become a flashpoint for the “resistance” to the Donald Trump presidency, and conservative speakers have routinely been prevented from speaking there of late. Ann Coulter, for example, had to cancel her appearance in April after authorities said they could not guarantee her safety and, prior to that, Milo Yiannopoulos was abruptly canceled when masked “antifa” rioters showed up hurling Molotov cocktails at police and bricks through windows.

This time, concrete walls are set up as barricades and masks and bandanas are banned, as are baseball bats, even at some nearby parks.

Earlier on Thursday, Shapiro joked on NBC News that “it’s like Godzilla’s coming to town,” though he tells THR: “I should be the safest guy at the event — I have security, and the university certainly doesn’t want a headline speaker being hurt.”

Shapiro is one of the more prominent podcasters on the political right. He quit Breitbart last year when that outlet seemed to side with Corey Lewandowski over Breitbart reporter Michelle Fields, who accused the then-Trump campaign manager of manhandling her. Shapiro also famously caught several TV producers on tape admitting their biases against conservatives, and he wrote a book on the subject.

Nowadays, the 33-year-old Harvard Law School and UCLA alum is a hot draw on college campuses nationwide, invited by campus Republicans, though his speeches are oftentimes disrupted and sometimes canceled.

“We’ve experienced a near-riot at Cal State Los Angeles in February 2016; there was a very rowdy protest at Penn State last year; at the University of Wisconsin students stormed the front stage and prevented me from speaking for 20 minutes,” says Shapiro. “I’m all for people protesting; I’m not for people disrupting presentations or getting violent. That’s what we’re worried about at Berkeley.”

Shapiro doesn’t want THR to reveal too much about his whereabouts ahead of his speech as protesters are reportedly readying their strategies. When Coulter was in the city five months ago, her appearance on campus was officially canceled as she stepped off the airplane. She didn’t bother going to the school, though she was approached regularly about town, usually by supporters.

“I’m hopeful that this sets a precedent by Berkeley that they’ll protect their speakers,” says Shapiro. “And I hope it sets a precedent for the left that not everyone on the right should be labeled a ‘white supremacist,’ and that doing so simply forwards antifa’s violent narrative.”

As controversial as Shapiro’s appearance may be, it could just be a warm-up for the main event, that being set for Sep. 24-27 when Yiannopoulos intends to hold his “Free Speech Week” at Berkeley. He will be joined by Coulter and Steve Bannon, his former boss at Breitbart and Trump’s ex-chief strategist. Berkeley, though, has so far balked at giving official permission for the event to take place.

Yiannopoulos quit Breitbart in February after making controversial remarks at a different outlet that many interpreted as an endorsement of gay sex between willing underage teens and adult men. Bannon recently quit his job with Trump to rejoin Breitbart as its executive chairman.

Thursday’s security measures at Berkeley also includes shutting down several buildings, and at least one professor canceled his class, writing in an email to students that was obtained by the Daily Wire, where Shapiro is editor in chief: “I’ve heard from some of your classmates that they do not feel safe coming to a militarized campus on Thursday … Sorry we’ve had to do this, but in the current attack on campus, I don’t feel like we have a choice.” 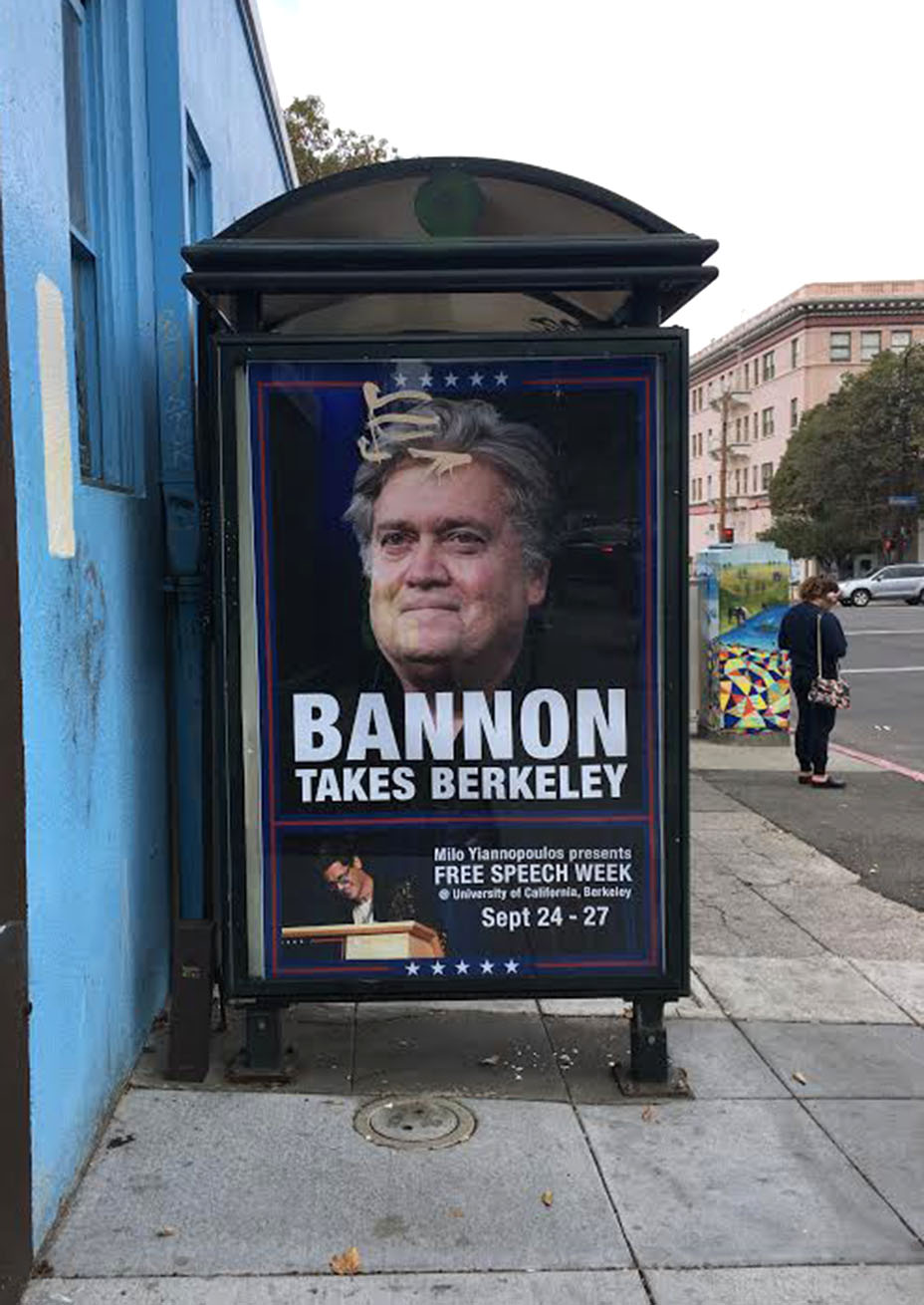 Political Podcasts Are Having a Moment (And Making Real Money)