“The primary mood for me was anxiety, with secondary moods of excitement and inspiration,” she said. “We knew that night we won Yes on 17, [the California proposition] that restored voting rights for people coming home on parole, and we knew that [Los Angeles County’s] Measure J had passed, which will build an alternative to an incarceration budget.” It would, of course, take four more days until the presidential race was called for Joe Biden. In the aftermath of the results, Cullors spoke with The Hollywood Reporter about where Black Lives Matter goes next, how Hollywood can help and what her hopes are for the Biden-Harris administration.

'Queer as Folk': Watch the Trailer for the Peacock Reimagining

What’s your reaction to the national election results?

Black people — especially Black women — have saved the United States. Whether in Milwaukee, Detroit, Philadelphia, Atlanta, or Los Angeles, Black voters showed up in huge numbers to turn this country around and remove the racist in the White House. Black Lives Matter Global Network alone had direct voter engagement with more than 60 million people via phone banking, text messaging and ads for this historic election. And, Melina Abdullah, our local chapter lead in Los Angeles, led the effort to oust [L.A.] District Attorney Jackie Lacey. What is abundantly clear is Black voters tipped the scales in favor of Joe Biden and Kamala Harris, especially in Rust Belt battleground states. It’s a testament to our communities that the same people who have been treated the worst by our democracy still showed up to save it. We congratulate President-elect Biden and particularly Vice President-elect Kamala Harris, on becoming the country’s first woman — a Black woman — to serve as Vice President. This historic win is a testament to the work Black women have been doing in the streets, in this campaign, and at every level of politics. On Jan. 20, 2021, the sun will rise on an America that is no longer a global embarrassment. New work will begin.

Is BLM in communication with the Biden-Harris transition team? 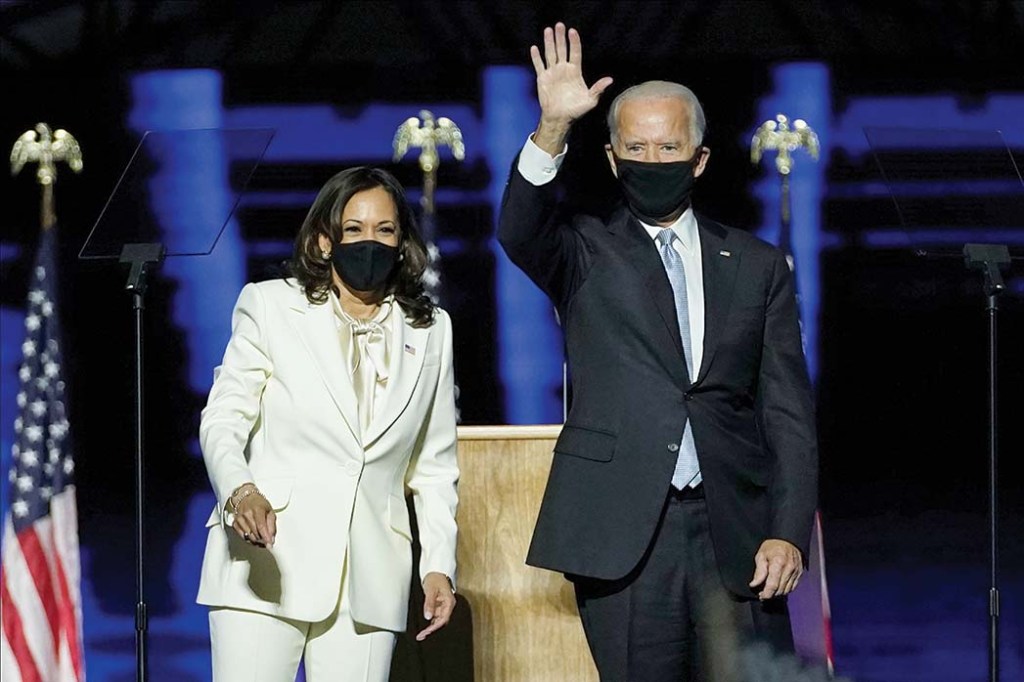 There will be a Black woman vp for the first time. How do you feel?

It’s complicated, you know. I think it’s powerful for so many reasons that we have Sen. Harris as vice president-elect, as a Black woman, as a Howard grad. I also think her history has been hard for many people, especially those who grew up in California. As the attorney general and as a district attorney, she often was tough on crime. I’ve heard her on the campaign trail when she was running to be apologetic for and be honest about the role she played in supporting mass incarceration. I’m excited about holding her accountable to more progressive policies.

What federal legislation will you be pushing for in 2021?

We have a real opportunity to change lives with the first piece of federal legislation written by and directly for our community: The BREATHE Act. We are requesting that — in the first 100 days — the Biden-Harris administration works to pass this legislation. The BREATHE Act brings four simple ideas to the table: divest federal resources from incarceration and policing; invest in new, nonpunitive, non-carceral approaches to community safety that lead states to shrink their criminal-legal systems and center the protection of Black lives — including Black mothers, Black trans people and Black women; allocate new money to build healthy, sustainable and equitable communities; and hold political leaders accountable to their promises and enhance the self-determination of all Black communities.

BLM recently launched its first PAC. What are its priorities now?

We established BLM PAC to build on the power we earned protesting in the streets. We need to do more to help Black people make the connection from civil disobedience to civic action. We need to ensure there are candidates in office that manifest the demands from the streets for the liberation of Black and brown communities. Within two weeks of launching BLM PAC we became a force in the 2020 election. In partnership with the Working Families Party, 6,000 volunteers signed up for almost 10,000 shifts as part of a GOTV effort that called and texted 5.4 million voters in states like Pennsylvania, Georgia, Wisconsin and Arizona. We made over 277,000 phone calls alone, in Georgia and South Carolina. We understand that if we are unable to break the Republican majority in the Senate, it will be difficult to get legislation passed that remediates the damage done to the Black community. So we are now working to secure the Senate by investing in a strong digital and grassroots strategy in the Georgia runoff election. We will need both financial and in-kind support to secure this win and begin putting into place the building blocks to undo the harm that has been created these past four years.

How can Hollywood play a role in fighting racism in the country?

We know that the current occupant of the White House will continue to use vitriol and dog-whistle tactics to rally white supremacists and derail the election results. America is a democracy, not a dictatorship, and Black Lives Matter is prepared to protect, preserve and defend our vote. We will need voices throughout the various fields of entertainment to join us in this fight. We must control the narrative and not allow the legitimate and most basic act of democracy be twisted against us. We will have to push back at every turn. Use your platform to drown out those who attempt to spread misinformation on the electoral process. Lift up stories of the everyday people that are doing their civic duty as election volunteers. Black Lives Matter is often targeted and blamed for violence incited by white counter-protesters. Help push back against these false narratives and lift up the many examples of peaceful protests led by BLM and our allies. We need allies that are willing to boldly stand with us, not just for the “likes” but against and through the hate.  And, as we press forward to pass federal, state and local versions of the BREATHE Act we will need your voice and your financial support — join our BREATHE Artist Council today to become active in the next phase of moving from protest to polls to policy.

What’s your ideal scenario for where Hollywood is a year from now when it comes to inclusion?

I’m one of the first Black community organizers to get a huge deal with Warner Bros. I’d love to see that happen for more folks across our movement. I think so many of us have been storytellers without resources for so long, and I am very excited about being able to tell more stories from our specific perspective. I would love to see more Black folks in writers rooms as well as more Black showrunners and executives. I think Hollywood could use its power and influence to help build narrative power for Black people in the industry and outside of the industry.

What sort of projects working on under your new Warner Bros. deal?

It’s all in the works but I’m very excited. Just know that it’s going to be very Black and very amazing. My work behind the camera will be an organic extension of the work I’ve been doing for the last 20 years to ensure Black lives matter in local communities, the country, the entertainment industry and the world. 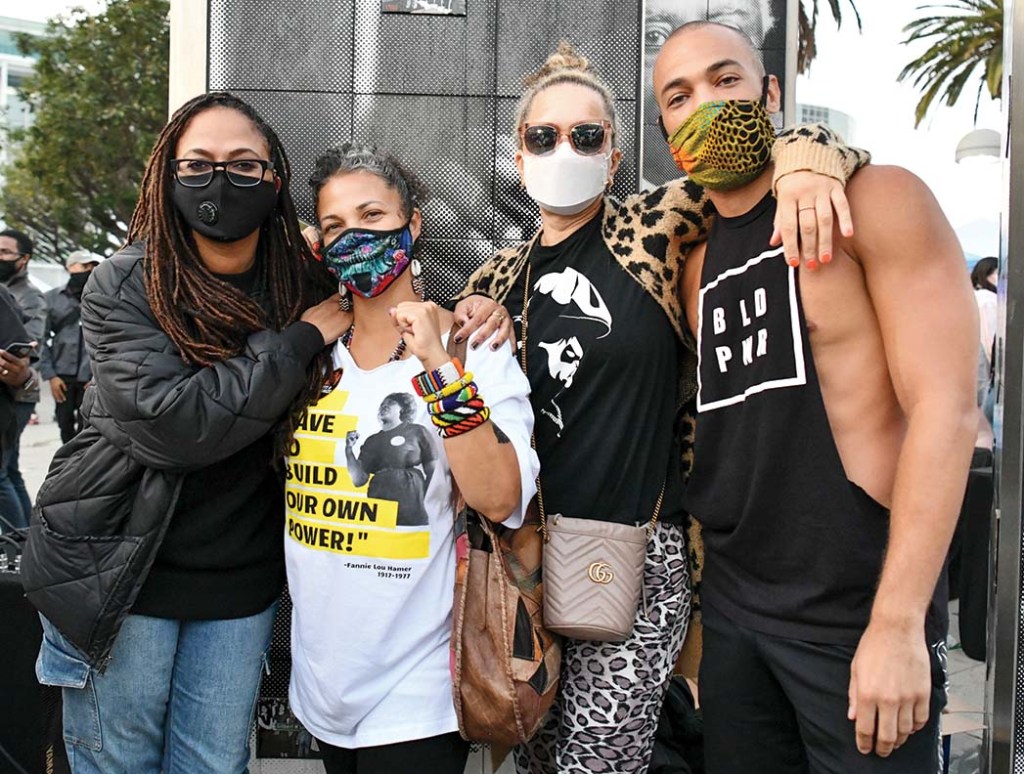 2020 was such a watershed moment for the embrace of Black Lives Matter. When you look back over the last few years, what do you see?

Black Lives Matter started in the streets seven years ago. When the system failed us, we took the conversation to the only place where we could be heard. We built the largest human rights and social movement in the history of the world. In building the largest social movement in history we organized across industries calling for everyone to join our movement. Transforming a country takes time, and as a community organizer I understand that we must work with every single community who is willing to show up for the cause.

How much of a difference was there between Hollywood support for BLM prior to this year and how many people in Hollywood came out in support this year?

A marked difference. Absolutely. [Prior to 2020] we were supported by Hollywood celebrities here and there.

Who in Hollywood has really stepped up for Black Lives Matter?

There’s been such amazing connection between Hollywood and our movement space — celebrities using their platforms who are following the leadership of Black organizers. Hollywood is recognizing the power of Black movement, especially in this past year more than ever. We have also seen individuals like Yara Shahidi, Kendrick Sampson, Ava DuVernay, Tessa Thompson, America Ferrera, Natalie Portman, Tracee Ellis Ross and so many more join us in the fight for Black lives. Since garnering so much attention and exposure, we are starting to be heard and recognized in ways we could only dream were possible. I really want to shout out America Ferrera. Her organization [Harness] was founded to amplify the work of people on the ground. We’ve been working together for four years. We met the week after Trump was elected, and we would not have had so much celebrity engagement in this recent uprising if it weren’t for her leadership. America brought in folks like Coldplay and Natalie Portman and Tracee Ellis Ross and Kerry Washington. She was really a validator and ally of our movement. We will need celebrities’ voices to be the validators of us again and not allow the Biden-Harris ticket to marginalize Black progressive movements.

A version of this story first appeared in the Nov. 18 issue of The Hollywood Reporter magazine. Click here to subscribe.