In a season packed with Emmy FYC (for your consideration) events, Tuesday night brought something a little different. Call it an FYCIA screening, perhaps.

On offer at the West Hollywood Public Library — yes, the library! — was a showing of ANGLE of Ascent, a 45-minute documentary released by the CIA last December and available on YouTube. Not available online: two CIA officers who journeyed from Langley, Virginia, to host the agency’s first-ever Los Angeles LGBTQ event.

One of them was Chris Courtemanche, an HR specialist who fielded audience questions about how to get hired at the CIA. One piece of advice sure to warm Hollywood hearts: Cut out the illegal downloading of movies, TV shows and music. Above an (undisclosed) dollar value, gorging on pirated product can be an automatic disqualifier for security clearance. No clearance, no job.

Also visiting from spy HQ was Sharon VanCory, who works in a technical field we needn’t disclose. A longtime CIA employee, she was a co-founder two decades ago of ANGLE, Agency Network for Gay, Lesbian, Bisexual, and Transgender Officers and Allies, the group profiled in the documentary — and which has inspired similar organizations at the FBI, NSA and across the intelligence community. The organization received Out & Equal Workplace Advocate’s first-ever Excellence in Government Leadership Award last year.

“ANGLE was really a trailblazer,” said Obama administration CIA director John Brennan in the video, directed by “John C.,” which is surely a deeper cover than “Alan Smithee.” All the end credits are anonymized in this fashion, as are some of the officers who appear in the film, including one named Chris, who’s transmogrified into a mass of heaving pixels with a voice to match. 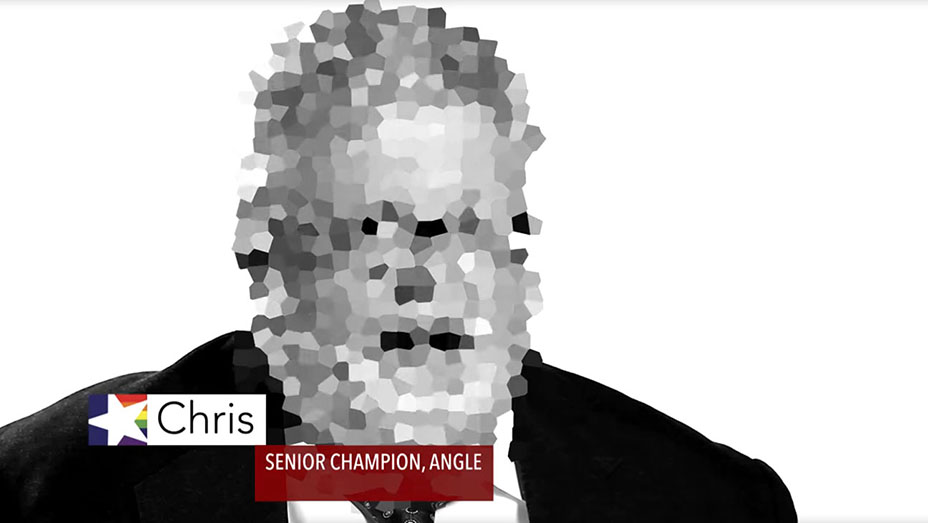 Coincidentally, Brennan testified before the House Intelligence Committee earlier Tuesday, telling lawmakers publicly that he had become concerned about Russian attempts to “suborn” members of the Trump campaign.

Alas, ANGLE of Ascent lacks the drama of the current events thriller now unfolding. It focuses exclusively on workplace diversity and doesn’t spill the beans on any gay Mata Hari-type operations the organization’s foreign operatives may have engaged in. That sort of seduction with a twist would be something for Hollywood to work with.

The two officers in town had nothing to say on this subject either, nor on the pressing matter of whether agency personnel prefer The Americans or Archer. A later conversation with CIA spokesman Jonathan Liu proved more fruitful. “I know colleagues who watch both of those shows,” he said, laughing.

On the big screen, he praised the verisimilitude of 2012’s Argo, adding that getting the details right “resonates with” agency viewers and noting that the organization has an industry liaison for that purpose.

But if art draws from life, sometimes it’s the other way around, and the entertainment industry itself did play a role in the development of the gay-friendly CIA. As the video depicts, the climate for LGBT CIA personnel was chilly even beyond 1995, when President Clinton signed Executive Order 12968, ending a longstanding anti-gay ban on security clearances. Once that happened, the legal landscape changed. However, the temperature inside the agency didn’t.

Until Ellen, that is.

Although it goes unmentioned in the film, VanCory explained to The Hollywood Reporter that when Ellen DeGeneres came out — on April 30, 1997 — an internal computer bulletin board system at the CIA “lit up” with volumes of anonymous homophobic comments in response to DeGeneres’ TV and Time magazine announcements.

Who knew the nation’s spies were paying such attention to a sitcom star? But they were — national icons are national assets, after all — and the hostile posts incensed ANGLE founder Tracey Ballard, who replied to them non-anonymously and convinced VanCory to do so as well. That started to change the tenor of the remarks, energized the activists and convinced a number of senior, straight officers that the organization had a problem.

Now, 20 years later, the agency sponsors gay-pride festivals inside the Beltway, hires openly LGBT applicants and works to project a welcoming message, notwithstanding bumps in the road, such as 2015 allegations — subsequently resolved — by a gay CIA contractor that agency employees subjected him to antigay bulling in the Afghan desert.

Will LGBT personnel continue to feel at home in the agency under the new administration? “We’re still getting funding,” said Courtemanche of his LGBT outreach program. “The director says he’s supportive of diversity. We’re hoping that he — I’ll leave that to the Office of Public Affairs.”

“Director Pompeo is committed to fostering a diverse and inclusive environment for all agency officers, including LGBT employees and allies,” said agency spokesman Liu. “ANGLE also continues to educate our workforce, advocate for the interests of our LGBT employees and bring about cultural change in the agency, [and Courtemanche] works closely with ANGLE in educating the LGBT community about the CIA.”

The West Hollywood screening, sponsored by the Los Angeles Gay and Lesbian Chamber of Commerce, got off to a slightly late start when no one could be found to unlock the AV closet. Like the spooks in Langley, WeHo librarians apparently run a tight ship. Joked Chamber executive director Marquita Thomas, “This is a very secure facility, and we can’t push the play button on our own.”

'The Puppy Episode' at 20: Ellen DeGeneres Looks Back in Emotional Talk Show Special